Time series clustering is a challenging task due to the specific nature of the data. Classical approaches do not perform well and need to be adapted either through a new distance measure or a data transformation. In this paper we investigate the combination of a convolutional autoencoder and a k-medoids algorithm to perfom time series clustering. The convolutional autoencoder allows to extract meaningful features and reduce the dimension of the data, leading to an improvement of the subsequent clustering. Using simulation and energy related data to validate the approach, experimental results show that the clustering is robust to outliers thus leading to finer clusters than with standard methods. 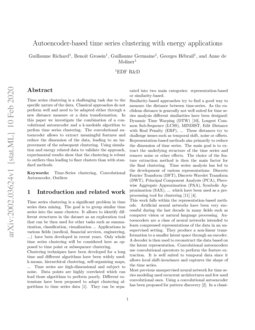 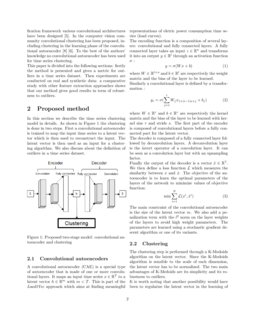 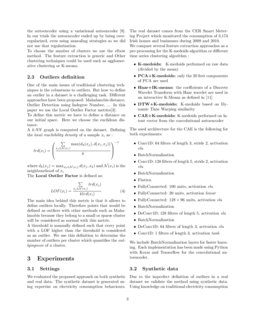 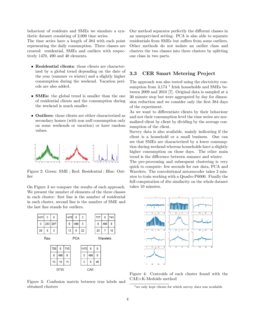 Time series clustering is a significant problem in time series data mining. The goal is to group similar time series into the same clusters. It allows to identify different structures in the dataset as an exploration tool that can be then used for other tasks such as summarization, classification, visualization … Applications in various fields (medical, financial services, engineering, …) have been developed in recent years. Only whole time series clustering will be considered here as opposed to time point or subsequence clustering.

Clustering techniques have been developed for a long time and different algorithms have been widely used: k-means, hierarchical clustering, self-organizing maps, … Time series are high-dimensional and subject to noise. Data points are highly correlated which can lead those algorithms to perform poorly. Different extensions have been proposed to adapt clustering algorithms to time series data

[Aghabozorgi]. They can be separated into two main categories: representation-based or similarity-based. Similarity-based approaches try to find a good way to measure the distance between time-series. As the euclidean distance is generally not well suited for time series analysis different similarities have been designed: Dynamic Time Warping (DTW) [Sakoe:1990:DPA:108235.108244], Longest Common Sub-Sequence (LCSS), MINDIST, Edit Distance with Real Penalty (ERP), … These distances try to challenge issues such as temporal shift, noise or offsets.

Representation-based methods aim primarily to reduce the dimension of time series. The main goal is to extract the underlying structure of the time series and remove noise or other effects. The choice of the feature extraction method is then the main factor for the final clustering. Time series analysis has led to the development of various representations: Discrete Fourier Transform (DFT), Discrete Wavelet Transform (DWT), Principal Component Analysis (PCA), Piecewise Aggregate Approximation (PAA), Symbolic Approximation (SAX), … which have been used as a pre-processing tool for clustering

This work falls within the representation-based methods. Artificial neural networks have been very successful during the last decade in many fields such as computer vision or natural language processing. Autoencoders are a class of neural networks intended to learn compressed representations of the data in an unsupervised setting. They produce a non-linear transformation to a smaller latent space through an encoder. A decoder is then used to reconstruct the data based on the latent representation. Convolutional autoencoders use convolutional operators to perform the feature extraction. It is well suited to temporal data since it allows local shift-invariance and captures the shape of the time series.

In this section we describe the time series clustering model in details. As shown in Figure 1

A convolutional autoencoder (CAE) is a special type of autoencoder that is made of one or more convolutional layers. It maps an input time series x∈RT to a latent vector h∈Rm with m<T. This is part of the Load2Vec approach which aims at finding meaningful representations of eletric power consumption time series (load curves). The encoding function is a composition of several layers: convolutional and fully connected layers. A fully connected layer takes an input z∈Rn and transforms it into an output y∈Rl

through an activation function

where W∈Rl×n and b∈Rl are respectively the weight matrix and the bias of the layer to be learned. Similarly a convolutional layer is defined by a transformation :

. We then define a loss function

L which measures the similarity between x and ^x. The objective of the autoencoder is to learn the optimal parameters of the layers of the network to minimize values of objective function:

The main constraint of the convolutional autoencoder is the size of the latent vector m. We also add a penalization term with the l2

norm on the layer weights of the layers to avoid high weight parameters. The parameters are learned using a stochastic gradient descent algorithm or one of its variants.

The clustering step is performed through a K-Medoids algorithm on the latent vector. Since the K-Medoids algorithm is sensible to the scale of each dimension, the latent vector has to be normalized. The two main advantages of K-Medoids are its simplicity and its robustness to outliers. It is worth noting that another possibility would have been to regularize the latent vector in the learning of the autoencoder using a variational autoencoder [journals/corr/KingmaW13]. In our trials the autoencoder ended up by being over-regularized, even using annealing strategies so we did not use that regularization. To choose the number of clusters we use the elbow method. The feature extraction is generic and Other clustering techniques could be used such as agglomerative clustering or K-means.

One of the main issues of traditional clustering techniques is the robustness to outliers. But how to define an outlier in a dataset is a challenging task. Different approaches have been proposed: Mahalanobis distance, Outlier Detection using Indegree Number, … In this paper we use the Local Outlier Factor metrics

[Breunig:2000:LID:335191.335388]. To define this metric we have to define a distance on our initial space. Here we choose the euclidean distance. A k-NN graph is computed on the dataset. Defining the local reachibility density of a sample xi as :

where dk(xj)=maxxk∈N(xi)d(xj,xk) and N(xi) is the neighbourhood of xi The Local Outlier Factor is defined as:

The main idea behind this metric is that it allows to define outliers locally. Therefore points that would be defined as outliers with other methods such as Mahalanobis because they belong to a small or sparse cluster will be considered as normal with this metric. A threshold is manually defined such that every point with a LOF higher than the threshold is considered as an outlier. We use this definition to determine the number of outliers per cluster which quantifies the outlyingness of a cluster.

We evaluated the proposed approach on both synthetic and real data. The synthetic dataset is generated using expertise on electricity consumption behaviours. The real dataset comes from the CER Smart Metering Project which monitored the consumption of 3,174 Irish homes and businesses during 2009 and 2010. We compare several feature extraction approaches as a pre-processing for the K-medoids algorithm or different time series clustering algorithm :

The used architecture for the CAE is the following for both experiments:

We include BatchNormalization layers for faster learning. Each implementation has been made using Python with Keras and Tensorflow for the convolutional autoencoder.

Due to the imperfect definition of outliers in a real dataset we validate the method using synthetic data. Using knowledge on traditional electricity consumption behaviour of residents and SMEs we simulate a synthetic dataset consisting of 2,000 time series. The time series have a length of 384 with each point representing the daily consumption. Three classes are created: residential, SMEs and outliers with respectively 1470, 490 and 40 elements.

Our method separates perfectly the different classes in an unsupervised setting. PCA is also able to separate residentials from SMEs but suffers from some outliers. Other methods do not isolate an outlier class and clusters the two classes into three clusters by splitting one class in two parts.

The approach was also tested using the electricity consumption from 3,174 111we only kept clients for which survey data was available Irish households and SMEs between 2009 and 2010 [CER]. Original data is sampled at a 30 minute step but were aggregated by day for dimension reduction and we consider only the first 384 days of the experiment. As we want to differentiate clients by their behaviour and not their consumption level the time series are normalized client by client by dividing by the average consumption of the client. Survey data is also available, mainly indicating if the client is a household or a small business. One can see that SMEs are characterized by a lower consumption during weekend whereas households have a slightly higher consumption on those days. The other main trend is the difference between summer and winter. The pre-processing and subsequent clustering is very quick to compute: few seconds for raw data, PCA and Wavelets. The convolutional autoencoder takes 2 minutes to train working with a Quadro P6000. Finally the full computation of dtw similarity on the whole dataset takes 10 minutes.

Using the elbow method we find that a good number of clusters would be 10 or 16. On Figure 5 are plotted the size of each cluster and the number of outliers per cluster. An outlier is defined by its Local Outlier Factor and here we set the number of outliers at 5% of the dataset. One can see that most methods do not cope well with outliers: either the outliers are spread between clusters or they are all gathered in the major class. But the proposed method allows to isolate a class with high dispersion which gathers the outliers. Then the rest of the data can be clustered into finer clusters. Clusters have an interpretation and the centroids are shown in 4. Two clusters of SMEs come out and residential clients are clustered depending on other features: the peak in consumption during the 2010 winter or Christmas for example. The outlier cluster is characterized by many clients with abnormal consumption patterns (often very small or with few very high values). Tests were done with other number of clusters and the isolation of one outlier class remains. After 20 clusters the class is split into two. Experimentations have also been conducted with K-Means and Self-Organizing Maps (SOM). Similar results were obtained with the CAE whereas performance with other feature extraction dropped. This tends to show that convolutional autoencoder is a feature extractor for time series with very nice properties.

We propose a convolutional autoencoder as a feature extraction method for time series data. Experiments show that it allows to learn meaningful features to perform subsequent clustering. This approach performs well in terms of quality of clustering and robustness to outliers. It avoids the drawback of outlier removal from the dataset by gathering them into a single class. Our method is efficient for several clustering algorithms. Furthermore extensions to the multivariate case can be done easily using the different dimensions as channels in the autoencoder. Including the clustering in the learning as in [Guo2017DeepCW] did not yield the same improvement in our experiments.