We discuss the similarities and differences between training an auto-encoder to minimize the reconstruction error, and training the same auto-encoder to compress the data via a generative model. Minimizing a codelength for the data using an auto-encoder is equivalent to minimizing the reconstruction error plus some correcting terms which have an interpretation as either a denoising or contractive property of the decoding function. These terms are related but not identical to those used in denoising or contractive auto-encoders [Vincent et al. 2010, Rifai et al. 2011]. In particular, the codelength viewpoint fully determines an optimal noise level for the denoising criterion. 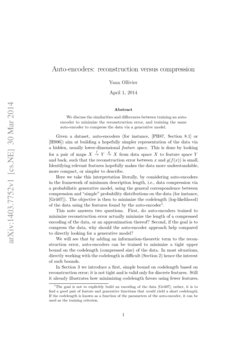 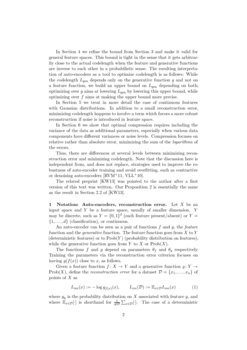 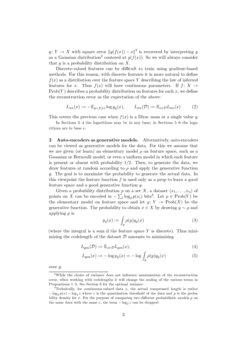 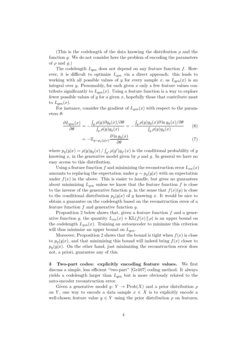 The additional terms in the codelength bounds can be interpreted as a denoising condition from features to reconstructed output. This is in contrast with previously proposed denoising auto-encoders. For neural networks, this criterion can be trained using standard backpropagation techniques.

The codelength approach determines an optimal noise level for this denoising interpretation, namely, the one that will provide the tightest codelength. This optimal noise is approximately the inverse Hessian of the reconstruction function, for which several approximation techniques exist in the literature.

A practical consequence is that the noise level should be set differently for each data sample in a denoising approach.

Under certain approximations, the codelength approach also translates as a penalty for large derivatives from feature to output, different from that posited in contractive auto-encoders. However, the resulting criterion is hard to train for complex models such as multilayer neural networks. More work is needed on this point.

Including the variances of the outputs as parameters results in better compression bounds and a modified reconstruction error involving the logarithms of the square errors together with the data quantization level. Still, having these variances as parameters is a modeling choice that may be relevant for compression but not in applications where the actual reconstruction error is considered.

It would be interesting to explore the practical consequences of these insights. Another point in need of further inquiry is how this codelength viewpoint combines with the stacking approach to deep learning, namely, after the data

x have been learned using features y and an elementary model for y, to further learn a finer model of y. For instance, it is likely that there is an interplay, in the denoising interpretation, between the noise level used on y when computing the codelength of x, and the output variance σy used in the definition of the reconstruction error of a model of y at the next level. This would require modeling the transmission of noise from one layer to another in stacked generative models and optimizing the levels of noise to minimize a resulting bound on codelength of the output.

The codelength bound from Theorem 5 involves a term logdetH(x) where H(x) is the Hessian of the loss function for input x. Optimizing this term with respect to the model parameters is difficult in general.

We consider the case when the generative model g:Y→X is a multilayer neural network. We provide an algorithm to compute the derivative of the logdetH(x) term appearing in Theorem 5 with respect to the network weights, using the layer-wise diagonal Gauss–Newton approximation of the Hessian H(x) from [LBOM96]. The algorithm has the same asymptotic computational cost as backpropagation.

So let the generative model g be a multilayer neural network with activation function s. The activity of unit i is

where the sum includes the bias term via the always-activated unit j=0 with aj≡1.

Let L be the loss function of the network.

The layer-wise diagonal Gauss–Newton approximation computes an approximation hi to the Hessian ∂2L∂a2i in the following way [LBOM96, Sections 7.3–7.4]: On the output units k, hk is directly set to hk:=∂2L∂a2k, and this is backpropagated through the network via

so that computing hi is similar to backpropagation using squared weights. This is also related to the backpropagated metric from [Oll13].

Theorem 9 (Gradient of the determinant of the Gauss–Newton Hessian).

Consider a generative model g given by a multilayer neural network. Let the reconstruction error be L=∑k(^xk−xk)22σ2k where ^xk are the components of the reconstructed data ^x=^x(y) using features y. Let the elementary model ρ on Y be Gaussian with variance diag(λi).

Let H(x)=∂2∂y2(Lyrec(x)−logρ(y)) as in Theorem 5. Let ^H(x) be the layer-wise diagonal Gauss–Newton approximation of H(x), namely

with hi computed from (42), initialized via hk=1/σ2k on the output layer.

Then the derivative of logdet^H(x) with respect to the network weights w can be computed exactly with an algorithmic cost of two forward and backpropagation passes.

This computation is trickier than it looks because the coefficients s′(Vj)2 used in the backpropagation for h depend on the weights of all units before j (because Vj does), not only the units directly influencing j.

initialized with some fixed values Bk on the output layer.

for some functions ψi on the input layer Lin.

Then the derivatives of S with respect to the network parameters wij can be computed at the same algorithmic cost as one forward and two backpropagation passes, as follows.

Then the derivatives of S are

We assume that the network is an arbitrary finite, directed acyclic graph. We also assume (for simplicity only) that no unit is both an output unit and influences other units. We denote i→j if there is an edge from i to j, i>j if there is a path of length ⩾1 from i to j, and i⩾j if i>j or i=j.

The computation has a structure similar to the forward-backward algorithm used in hidden Markov models.

For any pair of units l, m in the network, define the “backpropagation transfer rate” [Oll13] from l to m as

where the sum is over all paths γ from l to m in the network (including the length-0 path for l=m), and |γ| is the length of γ. In particular, τmm=1 and τml=0 if there is no path from l to m. By construction these satisfy the backpropagation equation

where the sum is over k in the output layer Lout. Consequently the derivative of S=∑i∈Linψi(Bi) with respect to a weight wmn is

so that we have to compute the derivatives of τki. (This assumes that the initialization of Bk on the output layer does not depend on the weights w.)

A weight wmn influences φn(wmn,Vn) and also influences Vn which in turn influences all values of Vj at subsequent units. Let us first compute the derivative of τki with respect to Vn. Summing over paths γ from i to k we find

Since Vn only influences later units in the network, the only non-zero terms are those with n⩾m. We can decompose into m=n and n>m:

Now, for n>m, the influence of Vn on Vm has to transit through some unit j directly connected to n, namely, for any function F(Vm),

where s is the activation function of the network. So

where the difference between the last two lines is that we removed the condition n>m in the summation over m: indeed, any m with non-vanishing ∂Vm/∂Vj satisfies j⩾m hence n>m. According to (55), ∑m∑l,l→mτli∂φm(wlm,Vm)∂Vjτkm is ∂τki∂Vj, so that (59) is ∑j,n→js′(Vn)wnj∂τki∂Vj. Collecting from (56), we find

so that the quantities ∂τki∂Vn can be computed by backpropagation on n, if the τ are known.

To compute the derivatives of τki with respect to a weight wmn, observe that wmn influences the wmn term in φn(wmn,Vn), as well as all terms Vl with n⩾l via its influence on Vn. Since ∂Vn∂wmn=am we find

This allows, in principle, to compute the desired derivatives. By (52) we have to compute the sum of (63) over i∈Lin and k∈Lout weighted by ψ′i(Bi) and Bk. This avoids a full computation of all transfer rates τ and yields

and where we have used that B satisfies

It remains to provide ways to compute Cm and Dn. For Cm, note that the transfer rates τ satisfy the forward propagation equation

by construction. Summing over i∈Lin with weights ψ′i(Bi) yields the forward propagation equation for C given in the statement of the lemma.

Finally, by summing over i and k in (60), with weights ψ′i(Bi)Bk, and using the definition of C and again the property Bn=∑k∈LoutτknBk, we obtain

which is the backpropagation equation for Dn and concludes the proof. ∎