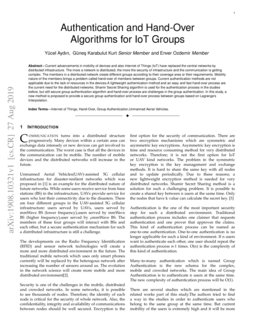 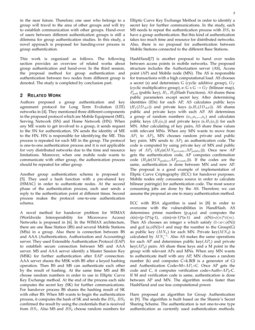 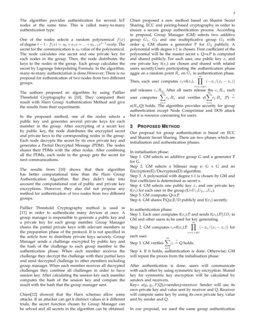 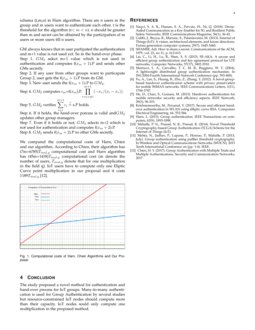 Communication turns into a distributed structure progressively. Many devices within a certain area can exchange data intensely or new devices can get involved to the communication. The worst case is that all the devices in the communication can be mobile. The number of mobile devices and the distributed networks will increase in the future. Unmanned Aerial Vehicles(UAV)-assisted 5G cellular infrastructure for disaster-resilient networks which was proposed in [1] is an example for the distributed nature of future networks. While some users receive service from base stations (BS) in the infrastructure, UAVs provide service for users who lost their connectivity due to the disasters. There are four different groups in the UAV-assisted 5G cellular infrastructure: users served by UAVs, users served by mmWave BS (lower frequency),users served by mmWave BS (higher frequency),user served by μmmWave BS. The members of these four groups will interact with BSs and each other, but a secure authentication mechanism for such a distributed infrastructure is still a challenge. The developments on the Radio Frequency Identification (RFID) and sensor network technologies will create a more and more distributed environment in the future. The traditional mobile network which uses only smart phones currently will be replaced by the heterogous network after increasing the number of sensors around us. The evolution in the network science will create more mobile and more distributed environment[2]. Security is one of the challenges in the mobile, distributed and crowded networks. In some networks, it is possible to see thousands of nodes. Therefore; the identity of each node is critical for the security of whole network. Also, the confidentiality, integrity and availability of communications between nodes should be well secured. Encryption is the first option for the security of communication. There are two encryption mechanisms which are symmetric and asymmetric key encryptions. Asymmetric key encryption is time and resource consuming method for very distributed networks. Therefore; it is not the first option for IoT or UAV kind networks. The problem in the symmetric key encryption is the key management and exchange methods. It is hard to share the same key with all nodes and to update periodically. Due to these reasons; a new lightweight encryption method is needed for very distributed networks. Shamir Secret Sharing method is a solution for such a challenging problem. It is possible to create a shared key between n users at the same time. Only the nodes that have k value can calculate the secret key. [3] Authentication is the one of the most important security step for such a distributed environment. Traditional authentication process includes one claimer that requests authentication and one prover that approves the claims. This kind of authentication process can be named as one-to-one authentication. One-to-one authentication is no longer applicable for such a kind of environment. If n users want to authenticate each other, one user should repeat the authentication process n-1 times. O(n) is the complexity of this kind of authentication. Many-to-many authentication which is named Group Authentication is the new schema for the complex, mobile and crowded networks. The main idea of Group Authentication is to authenticate n users at the same time. The new complexity of authentication process will be O(1). There are several studies which are mentioned in the related works part of this study.The authors tried to find a way in the studies in order to authenticate users who belong to the same group at the same time. But current mobility of the users is extremely high and it will be more in the near future. Therefore; one user who belongs to a group will travel to the area of other groups and will try to establish communication with other groups. Hand-over of users between different authentication groups is still a dilemma for group authentication studies. In this study, a novel approach is proposed for handing-over process in group authentication. This work is organized as follows. The following section provides an overview of related works about group authentication and hand-over. In the third session, the proposal method for group authentication and authentication between two nodes from different group is denoted. The study is completed by conclusion part.

Our proposal for group authentication is based on ECC and Shamir Secret Sharing. There are two phases which are initialisation and authentication phases. In initialisation phase: Step 1. GM selects an additive group G and a generator P for G. Step 2. GM selects a bilinear map e: G x G and an Encryption(E)/Decryption(D) algorithm. Step 3. A polynomial with degree t-1 is chosen by GM and first coefficient is determined as secret s. Step 4. GM selects one public key xi and one private key f(xi) for each user in the group.(U=U1,U2,…,Un). Step 5. GM computes Q=s.P. Step 6. GM shares P,Q,e,E/D publicly and f(xi) secretly. In authentication phase: Step 1. Each user computes f(xi).P and sends f(xi).P∥IDi to GM and other users to be used for key generating. Step 2. GM computes ci=f(xi).P.∏r=i,r≠im(−xr/(xi−xr)) for each user. Step 3. GM verifies ∑i=1mci ?= Q holds. Step 4. If it holds, authentication is done. Otherwise; GM will repeat the proces from the initialisation phase. After authentication is done, users will communicate with each other by using symmetric key encryption. Shared key for symmetric key encryption will be calculated by senders and receivers. Key= e(yi.yj.P,Q),i=sender,j=receiver. Sender will use its own private key and value sent by receiver and Q. Receiver will compute same key by using its own private key, value sent by sender and Q. In our proposal, we used the same group authentication schema (t,m,n) in Harn algorithm. There are n users in the group and m users want to authenticate each other. t is the threshold for the algorithm (t<m<n). n should be greater than m and secret can be obtained by the participation of m users or more users till n users. GM always knows that m user partipated the authentication and m+1 value is not used yet. So in the hand-over phase: Step 1. GM2 select m+1 value which is not used in authentication and computes f(xm+1).P and sends other GMs secretly. Step 2. If any user from other groups want to particapate Group 2, user gets the f(xm+1).P from its GM. Step 3. New user sends the f(xm+1).P to GM2. Step 4. GM2 computes cm=f(xm).P.∏r=i,r≠im+1(−xr/(xi−xr)). Step 5. GM2 verifies ∑i=1m+1ci ?= s.P holds. Step 6. If it holds, the hand-over porcess is valid andGM2 updates other group managers. Step 7. Even if it holds or not, GM2 selects m+2 which is not used for authentication and computes f(xm+2).P. Step 8. GM2 sends f(xm+2).P to other GMs secretly. We compared the computational costs of Harn, Chien and our algorithm. According to Chien, their algorithm has (7m+6785)Tmul,q computational cost and Harn algorithm has (45m+1418)Tmul,q computational cost (m denote the number of users, Tmul,q denote that for one multiplication in the field q). IoT users have to compute only one Eliptic Curve point multiplication in our proposal and it costs 1189Tmul,q [12].

The study proposed a novel method for authentication and hand-over process for IoT groups. Many-to-many authentication is used for Group Authentication by several studies but resource-constrained IoT nodes should compute more than their capacity. IoT nodes sould only compute one multiplication in the proposed method.