In this work we reformulate the method presented in App. Opt. 53:2297 (2014) as a constrained minimization problem using the augmented Lagrangian method. First we introduce the new method and then describe the numerical solution, which results in a simple algorithm. Numerical experiments with both synthetic and real fringe patterns show the accuracy and simplicity of the resulting algorithm. 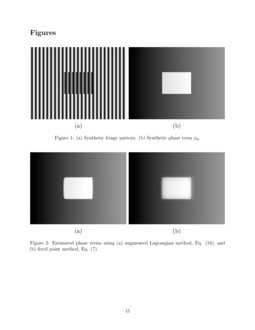 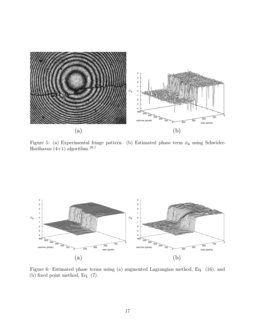 We present a variational method for recovering the phase term from the i...
Ricardo Legarda-Saenz, et al. ∙

The objective of this paper is to introduce and demonstrate a robust met...
Shiguang Deng, et al. ∙

The main goal of fringe analysis techniques is to recover accurately the local modulated phase from one or several fringe patterns 1; such phase is related to some physical quantities like shape, deformation, refractive index, temperature, etc. The basic model for a fringe pattern is given by

where x=(x1,x2), ax is the background illumination, bx is the amplitude modulation, and ϕx is the phase map to be recovered; the spatial carrier frequency of the fringe pattern is defined by the term ωx.

Several methods which successfully estimate the phase from a single pattern have been reported in literature.

2, 3, 4, 5 These methods consider phase maps, amplitude and illumination terms as a continuous. However, the recovery of a discontinuous phase map from a single fringe pattern remains a pending task, and is a challenging problem. Some years ago, it was proposed a method for computing discontinuous phase maps of a fringe pattern with carrier frequency, based on the minimization of a regularized cost function, which uses a second-order edge-preserving potential 6. Although this method is able to detect and reconstruct phase discontinuities, its cost functional is not convex, hence convergence to an optimal solution is conditioned to the provided initial phase usually computed by standard methods.

In a recent work, it was proposed a method for computing discontinuous phase maps based on a total variational (TV) approach, 7 where TV regularization is applied to the background, amplitude and phase terms of the fringe model, resulting in accurate phase reconstructions. 8 Despite this fact, this model lacks of a fast algorithm for its solution. Recently, it was proposed a fixed point method to speed up the numerical solution of this model. 9 This fixed point method shows a good performance solving the model presented in reference 8; however, similar to other methods based on the TV approach, the fixed point method performance is dramatically reduced for problems highly anosotropic.

In this work we reformulate the model presented in reference 8 as a constrained minimization problem using augmented Lagrangian method. First, we describe the ideas that give support to our reformulation, and then we describe the numerical solution of the proposed augmented Lagrangian method, which results in a simple algorithm. The performance of the proposed method is evaluated by numerical experiments with both synthetic and real data. A comparison against the fixed point method is presented. Finally we discuss our results and present some concluding remarks.

where Ω⊂R2 is the domain of integration, gx is the given fringe pattern and λ is the regularization parameter. As it was shown in ref. 8, this model allows the accurate demodulation of a single fringe pattern with discontinuities. The first-order optimality conditions or Euler-Lagrange equations of Eq. (2) are given by

where n denotes the unit outer normal to the boundary.

The numerical solution proposed in ref. 8 was a gradient descent scheme which is very slow and therefore a large number of iterations are necessary to reach an adequate solution. To speed up the convergence, a fixed point method 10, 11 was proposed recently: 9

In ref. 10 it was proposed a fixed point method to solve the TV model. The basic idea is to linearize the nonlinear term of this model, so that at each iteration k the method is required to solve a linear system of the form

where dx is the unknown variable, the operator Ld(⋅) has been made linear by lagging the nonlinear term 1|∇dx|, and fd has the terms which remain constant at each k iteration.

Arranging Eq. (2.1) in the same way as described before, the proposed fixed point iteration is given by

and the proposed fixed point iteration is given by 9

Ref. 9 provides a detailed explanation of the convergence proof and the numerical performance of this method .

A distinctive feature of the solution proposed in Eq. (2.1) is that all the PDE’s have the coefficient 1|∇dx|, which is quite hard to deal with it numerically due to the inherent discontinuity. A typical solution to this problem is to include a small constant to avoid division by zero, that is 1√|∇dx|2+β, but this affect both the accuracy and efficiency of the solution. Here, we will review an alternative to avoid this problem in a similar TV model. This will prove to be helpful when we introduce our proposed augmented Lagrangian method in the next section.

The TV model for image denoising is given by 7

where u is the original image and f is the noisy image. It is well known that the computation of the TV method suffers from non-differentially due to the TV norm. 7, 12, 13, 14 Many numerical methods have been proposed to improve this drawback; one of them is to convert the above functional into a constrained optimization problem, where an auxiliary term is introduced to separate the estimation of the non-differentiable term: 15, 16, 17, 18

where q=(q1,q2)T is the auxiliary term. An efficient solution to the problem shown in Eq. (9) is using the augmented Lagrangian method defined as 18, 19, 20

is the vector of Lagrange multipliers and

Eq. (11) is an unconstrained optimization problem which is difficult to solve because variables u and q are coupled. One alternative, proposed in references 19 and 20, is to separate Eq. (11) in two subproblems defined as

given the term q, and

given the term u.

The optimality condition of the problem shown in Eq.(13

) gives a linear equation and can be solved efficiently using the Fourier Transform. On the other side, the problem shown in Eq.(

Following the idea described previously, we transform the problem shown in Eq. (2) into a constrained one, and then solve it with the augmented Lagrangian method. An obvious advantage of using the augmented Lagrangian method is that the solution benefits from a fast solver and closed-form solutions. In our case, unfortunately some terms in Eq. (2) are nonlinear, so a fast solver cannot be used in our solution; however the described closed-form solutions are susceptible to be used in our approach.

The proposed augmented Lagrangian method for Eq. (2) is defined as

where r is a positive constant, qd=(q1,q2)Td is the auxiliary term, μd=(μ1,μ2)Td are Lagrange multipliers and d is any variable representing ϕ, b, or a.

As can be observed, the functional shown in Eq. (2.3) has similar structure than the one shown in Eq. (10), so we follow the procedure described in the previous section to propose the solution of Eq. (2.3).

The minimization problem given in Eq. (2.3) is separated in two subproblems. The first subproblem is related to the solution of the terms ϕx, bx, and ax, given the auxiliary terms qϕ, qb, and qa. This subproblem is defined as

The second subproblem is related to the solution of the auxiliary terms qϕ, qb, and qa, given the terms ϕx, bx, and ax. This subproblem is defined as

In the case of the functionals shown in Eq. (2.3), the solution can be stated as follows:

The first-order optimality conditions of Eq. (2.3) are given by

The above equations have the same form than Eq. (2.1), so it is possible to express them as the fixed point iteration shown in Eq. (2.1):

where wd=r∇dk+1x−μkd, and d is any variable representing ϕ, b, or a.

Finally, the update of the Lagrange multipliers is carried out in the same way it was done in Eq. (12). The iterative procedure to solve Eq. (2.3) is given in Algorithm 2.

To illustrate the performance of the augmented Lagrangian method (ALM), we carried out some numerical experiments using a Intel Core i7 @ 2.40 GHz laptop with Debian GNU/Linux 9 (64-bit) and 16 GB of memory. In these experiments, we compare our proposed method with the fixed point method (FP) shown in Eq. (2.1). Both methods were implemented in C/C++. In our experiments we used as stopping criteria the following condition

where ϵ=10−5 and d is any variable representing ϕ, b, or a. For the augmented Lagrangian method we use r=11.5, and for the fixed point method we use β=10−3, which is the constant to avoid division by zero.

For simplicity, we selected the regularization parameter λ manually. However, well known methods can be used to obtain the best parameter for this task, such as those described in section 5.6 of reference 24. In addition, we use a normalized error Q to compare the phase-map estimation; this error is defined as 25

where μ and ν are the signals to be compared. The normalized error values vary between zero (for perfect agreement) and one (for total disagreement).

In Figure 2, it can be seen that both methods successfully demodulate the discontinuity found in the synthetic fringe pattern. However, when analysing Figure 3, we found that the demodulation of the proposed augmented Lagrangian method is more precise than that of the fixed point method. Moreover, the time and number of iterations employed to obtain the solution are better than the fixed point method. This is due to the influence of the term β on the performance of the fixed point method: with a larger value of this term, the speed of convergence of the method is better but the accuracy of the solution gets worse. This is not desirable in fringe analysis techniques.

The demodulations of this experimental fringe pattern using the augmented Lagrangian method and the fixed point method are shown in Figure 6, both with λ=10. In Figure 7 we shows the middle column of the estimated phase term ϕx. The time employed by the augmented Lagrangian method to obtain the solution was 430 seconds using 1995 iterations. On the other hand, the fixed point method took 3288 seconds using 7445 iterations to obtain the solution.

As can be observed in Figures 6 and 7, both methods are able to demodulate the discontinuity found in the experimental fringe pattern. These estimations can be seen as the filtered version of the one shown in Figure 5, panel (b). One relevant aspect is that both methods preserve the dynamic range of the phase term ϕx. On the other hand, there are marked differences in the quality of the estimation and in the numerical performance to obtain it: the proposed augmented Lagrangian method delivers a piecewise constant surface while the fixed point method gives a smoother one. Additionally, our proposal is several times faster than the fixed point method.

In this paper we present a reformulation of the method presented in reference 8 as a constrained minimization problem and we solve it using the augmented Lagrangian method. As can be seen in the numerical experiments, the proposed method is able to accurately demodulate a single fringe pattern with discontinuities. The numerical solution of Eq. (2.3) results in a simple algorithm, which is faster and preserves the dynamic range of the phase term ϕx. An extra advantage of the proposed method is its feasibility to be implemented on dedicated hardware to obtain real-time processing. This will be one aim of our future research.