An audiovisual speaker conversion method is presented for simultaneously transforming the facial expressions and voice of a source speaker into those of a target speaker. Transforming the facial and acoustic features together makes it possible for the converted voice and facial expressions to be highly correlated and for the generated target speaker to appear and sound natural. It uses three neural networks: a conversion network that fuses and transforms the facial and acoustic features, a waveform generation network that produces the waveform from both the converted facial and acoustic features, and an image reconstruction network that outputs an RGB facial image also based on both the converted features. The results of experiments using an emotional audiovisual database showed that the proposed method achieved significantly higher naturalness compared with one that separately transformed acoustic and facial features. 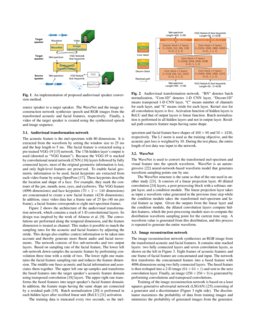 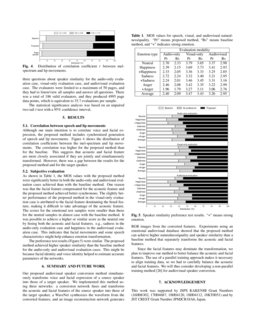 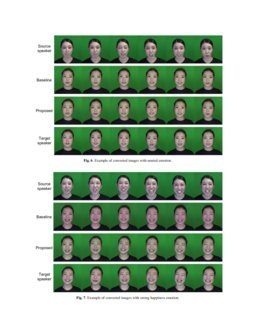 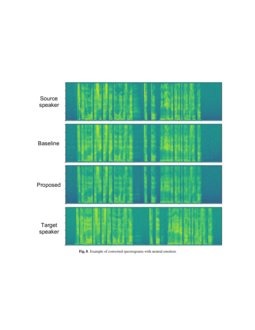 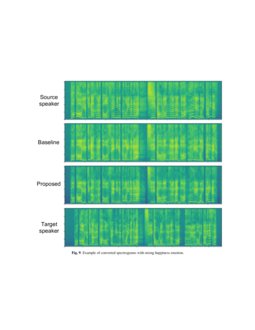 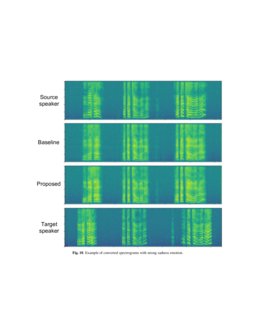 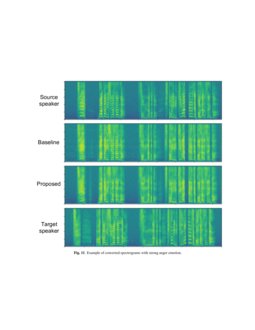 With the development of information processing technology and the spread of Internet, voice and facial expression-based methods are being used more and more in our everyday lives. Two prominent methods are voice conversion [1] and face transformation [2], which change a person’s voice or facial expressions into that or those of another person. These methods can be used for privacy protection, film/animation production, games, and other voice/facial signal-based transformations.

The main idea of the proposed AVSC method is to correlate acoustic and facial characteristics so that they can compensate for each other during transformation and achieve high naturalness. Figure 1

illustrates an implementation of the proposed method, which uses three networks: an audiovisual transformation network, a WaveNet

[13], and an image reconstruction network. The audiovisual transformation network is used to convert acoustic and facial features from a source speaker to a target speaker. The WaveNet and the image reconstruction network synthesize speech and RGB images from the transformed acoustic and facial features, respectively. Finally, a video of the target speaker is created using the synthesized speech and image sequence.

The acoustic feature is the mel-spectrum with 80 dimensions. It is extracted from the waveform by setting the window size to 25 ms and the hop length to 5 ms. The facial feature is extracted using a pre-trained VGG-19 [14]

network. The 17th hidden layer’s output is used (denoted as “VGG feature”). Because the VGG-19 is stacked by convolutional neural network (CNN)

[16]. These keypoints describe the location and shape of a face. For example, they mark the contours of the jaw, mouth, nose, eyes, and eyebrows. The VGG feature (4096 dimensions) and face keypoints (70×2=140 dimensions) are concatenated to create a new facial feature (4236 dimensions). In addition, since video data has a frame rate of 25 fps (40 ms per frame), a facial feature corresponds to eight mel-spectrum frames.

Figure 2 shows the architecture of the audiovisual transformation network, which contains a stack of 1-D convolutional layers. Its design was inspired by the work of Afouras et al. [8]

. The convolutions are performed along the temporal dimension, and the feature dimension is treated as channel. This makes it possible to match the sampling rates for the acoustic and facial features by adjusting the stride. This design also enables context information to be taken into account and thereby generate more fluent audio and facial movements. The network consists of five sub-networks and two output layers. Based on sampling rate of the facial feature, The lower left sub-network down-samples the acoustic feature by performing convolution three time with a stride of two. The lower right one maintains the facial feature sampling rate and reduces the feature dimension. The middle one fuses acoustic and facial information and associates them together. The upper left one up-samples and transforms the fused features into the target speaker’s acoustic feature domain using transposed convolution

[17] layers. The upper right one transforms the fused features into target speaker’s facial feature domain. In addition, the feature maps having the same shape are connected by a residual path [18]

is performed in each hidden layer after rectified linear unit (ReLU)

The training data is truncated every two seconds, so the mel-spectrum and facial feature have shapes of 400×80 and 50×4236, respectively. The L1 norm is used as the training objective, and the acoustic part loss is weighted by 10. During the test phase, the entire length of test data was input to the network.

The WaveNet is used to convert the transformed mel-spectrum and facial feature into the speech waveform. WaveNet is an autoregressive [21] neural-network-based waveform model that generates waveform sampling points one by one.

The WaveNet structure is the same as that of the one used in another study [22] except the condition module which takes in the mel-spectrum as input. It consists of a linear projection layer, 40 dilated convolution [23] layers, a post-processing block with a softmax output layer, and a condition module. The linear projection layer takes as input a waveform value generated in the previous time step while the condition module takes the transformed mel-spectrum and facial feature as input. Given the outputs from the linear layer and the condition module, the dilated convolution layers compute hidden features, which the post-processing module uses to compute the distribution waveform sampling point for the current time step. A waveform value is generated from this distribution, and this process is repeated to generate the entire waveform.

The image reconstruction network synthesizes an RGB image from the transformed acoustic and facial features. It contains nine stacked layers: two fully connected layers and seven convolution layers, as shown on the left in Figure 3. Eight frames of acoustic features and one frame of facial feature are concatenated and input. The network first transforms the concatenated feature into a fused feature with 4096 dimensions using two fully connected layers. The fused feature is then reshaped into a 2-D image (64×64×1) and sent to the next convolution layer. Finally, an image (256×256×3) is generated by performing convolutions and transposed convolutions.

To accurately evaluate the correlation between audio and facial features, we created an emotional audiovisual database using input from two Japanese female actors. Seven emotions were defined: neutral, normal happiness, strong happiness, normal sadness, strong sadness, normal anger, and strong anger. For each emotion, we used 100 different sentences selected from dialogs in novels. We asked the two actors to utter each sentence while displaying the corresponding emotion. Four people monitored the recording sessions, and if any of them felt that the target emotion was not displayed in the speech or facial expression, the actor was instructed to repeat the recording of that sentence.

The recording took place in a soundproof chamber. A condenser microphone (NEUMANN87) and a video camera (Sony HDR-720V/B) were set at front of the actor. A green cloth sheet was used as the background. The audio was recorded at 96 kHz with 24-bit resolution. The video was recorded at 60 fps with 1920×1080 resolution. There were 17 recording sessions in total. A clapperboard was clapped shut at the beginning of each session to enable the audio to be synchronized with the video. Finally, the audio signal recorded by the video camera was replaced with that recorded using the condenser microphone.

We designated speaker F01 as the source speaker and F02 as the target speaker. We randomly selected 90 data samples for each emotion as training data (630 samples in total) for each speaker. The remaining 70 samples were used as test data. We down-sampled the audio signal to 48 kHz with 16-bit resolution and then extracted the mel-spectrum. We down-sampled the video signal to 25 fps, centered the speaker, and resized the video to 1080×1080. We then extracted the image and resized it to 224×224

for VGG feature extraction and

256×256 for face keypoint extraction as well as for use as training data for the image reconstruction network.

The WaveNet was adapted from a pre-trained model [22] that was trained using 15 hours of Japanese speech data. We fine tuned over 199 epochs using the F02 training data. The number of epochs was set on the basis of the results of a preliminary experiment.

The image reconstruction network was trained using the F02 training data. The learning rates were set to 10−3 and 10−5 for the generator and discriminator, respectively, the mini-batch size was 64, and number of epochs was 30.

-test with a 99% confidence interval.

5.1 Correlation between speech and lip movements

As shown in Table 1, the MOS values with the proposed method were significantly better in both the audio-only and audiovisual evaluation cases achieved than with the baseline method. One reason was that the facial feature compensated for the acoustic feature and the proposed method achieved better synchronous. The slightly better performance of the proposed method in the visual-only evaluation case is attributed to the facial feature dominating the fused feature, making it difficult to take advantage of the acoustic feature. The scores for the emotional test samples were smaller than those for the neutral samples in almost case with the baseline method. It was possible to achieve a higher or similar score as the neutral one by fusing both the acoustic and facial features. e.g., sadness in the audio-only evaluation case and happiness in the audiovisual evaluation case. This indicates that facial movements and some speech characteristics might help enhance emotion transformation.

) were similar. The proposed method achieved higher speaker similarity than the baseline method for the audio-only and audiovisual evaluation cases. This might be because facial identity and voice identity helped to estimate accurate parameters of the networks.

Our proposed audiovisual speaker conversion method simultaneously transforms voice and facial expression of a source speaker into those of a target speaker. We implemented this method using three networks: a conversion network fuses and transforms the acoustic and facial features of the source speaker into those of the target speaker, a WaveNet synthesizes the waveform from the converted features, and an image reconstruction network generates RGB images from the converted features. Experiments using an emotional audiovisual database showed that the proposed method can achieve higher naturalness/quality and speaker similarity than a baseline method that separately transforms the acoustic and facial features.

Examples of images converted using the proposed and baseline methods are shown in Figure 6-7. It is difficult to tell which method generated higher quality images or which one generated images similar to the target speaker. However, when the audio and video were played together (the audiovisual evaluation case), the proposed method had better synchronization between the audio and facial movements than the baseline. This means that the proposed method achieves better association between acoustic and facial features.

Examples of spectrograms converted using the proposed and baseline methods are shown in Figure 8-11. The horizontal direction indicates temporal axis while the vertical direction is frequency axis with range of 0 to 8000Hz. It seems that the proposed method predicted better spectrogram than the baseline in most cases.