This paper investigate the classification of the Audio Set dataset. Audio Set is a large scale multi instance learning (MIL) dataset of sound clips. In MIL, a bag consists of several instances, and a bag is labelled positive if one or more instances in the audio clip is positive. Audio Set is a MIL dataset because an audio clip is labelled positive for a class if at least one frame contains the corresponding class. We tackle this MIL problem using an attention model and explain this attention model from a novel probabilistic perspective. We define a probability space on each bag. Each instance in a bag has a trainable probability measure for a class. Then the classification of a bag is the expectation of the classification of the instances in the bag with respect to the learned probability measure. Experimental results show that our proposed attention model modeled by fully connected deep neural network obtains mAP of 0.327 on Audio Set dataset, outperforming the Google's baseline of 0.314 and recurrent neural network of 0.325. 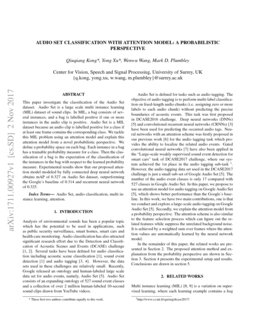 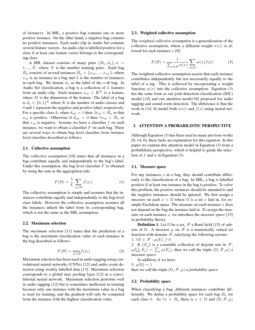 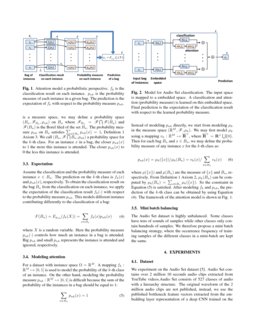 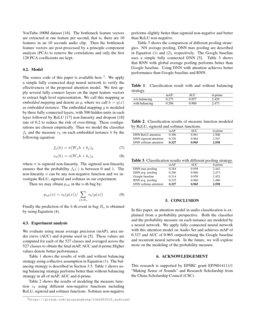 Audio tagging is the task of predicting the presence or absence of sound...
Qiuqiang Kong, et al. ∙

We introduce an extension of the multi-instance learning problem where e...
Alessandro Tibo, et al. ∙

The bag-of-frames approach: a not so sufficient model for urban soundscapes

Analysis of environmental sounds has been a popular topic which has the potential to be used in many applications, such as public security surveillance, smart homes, smart cars and health care monitoring. Audio classification has also attracted significant research effort due to the Detection and Classification of Acoustic Scenes and Events (DCASE) challenge [1, 2]

Audio Set is defined for tasks such as audio tagging. The objective of audio tagging is to perform multi-label classification on fixed-length audio chunks (i.e. assigning zero or more labels to each audio chunk) without predicting the precise boundaries of acoustic events. This task was first proposed in DCASE2016 challenge. Deep neural networks (DNNs) [5] and convolutional recurrent neural networks (CRNNs) [3] have been used for predicting the occurring audio tags. Neural networks with an attention scheme was firstly proposed in our previous work [6]

for the audio tagging task which provides the ability to localize the related audio events. Gated convolutional neural networks

. Secondly, we explain the attention model from a probability perspective. The attention scheme is also similar to the feature selection process which can figure out the related features while suppressing the unrelated background noise. It is achieved by a weighted sum over frames where the attention values are automatically learned by the neural network model.

In the remainder of this paper, the related works are presented in Section 2. The proposed attention method and explanation from the probability perspective are shown in Section 3. Section 4 presents the experimental setup and results. Conclusions are drawn in section 5.

is a variation on supervised learning, where each learning example contains a

A multi instance dataset consists of many pairs {Bn,dn},n=1,...,N, where N is the number training pairs. Each bag Bn consists of several instances Bn={xn1,...,xnL}, where xnl is an instance in a bag and L is the number of instances in each bag. We denote dn as the label of the n-th bag. In Audio Set classification, a bag is a collection of L features from an audio clip. Each instance xnl∈RM is a feature, where M is the dimension of the feature. The label of a bag is dn∈{0,1}K where K is the number of audio classes and 0 and 1 represent the negative and positive label, respectively. For a specific class k, when the label of the n-th bag dnk=1 then ∃xnl∈Bn so that xnl is positive. Otherwise if dnk=0 then ∀xnl∈Bn so that xnl is negative. Assume we have a classifier f on each instance, we want to obtain a classifier F on each bag. There are several ways to obtain bag level classifier from instance level classifier described as follows.

The collective assumption [10] states that all instances in a bag contribute equally and independently to the bag’s label. Under this assumption, the bag level classifier F is obtained by using the sum as the aggregation rule:

The maximum selection [11] states that the prediction of a bag is the maximum classification value of each instance in the bag described as follows:

[12] in a convolutional neural network. Maximum selection performs well in audio tagging [12] but is sometimes inefficient in training because only one instance with the maximum value in a bag is used for training, and the gradient will only be computed from the instance with the highest classification value.

The weighted collective assumption asserts that each instance contributes independently but not necessarily equally to the label of a tag. This is achieved by incorporating a weight function w(x) into the collective assumption. Equation (3) has the same form as our joint detection-classification (JDC) model [14] and our attention model [6] proposed for audio tagging and sound event detection. The difference is that the work in [14, 6] model both w(x) and f(x) using neural network.

Although Equation (3) has been used in many previous works [9, 14, 6], the explanation for this equation is not clearly presented. In this paper we explain this attention model in Equation (3) from a probabilistic perspective, which is helpful to guide the selection of f and w in Equation (3).

For any instances x in a bag, they should contribute differently to the classification of a bag. In MIL, a bag is labelled positive if at least one instance in the bag is positive. To solve this problem, the positive instances should be attended to and the negative instances should be ignored. We first assign a measure on each x∈Ω where Ω is a set x laid in, for example Euclidean space. To assign the measure on each instance x, we introduce the measure space [15]

Definition 1. Let Ω be a set, F a Borel field [15] of subsets of Ω. A measure μ on F is a numerically valued set function with domain F, satisfying the following axioms:

is a random variable. Equation (4) represents the instances

x∈Bn contributes differently to the classification of the bag Bn. The probability measure pnk(⋅) controls how much an instance x is attended. Large pnk and small pnk represents the instance is attended and ignored, respectively.

So instead of modeling pnk directly, we start from modeling μk in the measure space (RM,F,μk) because in the measure space μk does not need to satisfy Definition 1, Axiom 3. To model μk, we use a mapping vk:RM↦¯¯¯¯R+, where ¯¯¯¯R+=R+⋃{0}. Then for each bag Bn and x∈Bn, we may define the probability measure of any instance x of the k-th class as:

where μ({x}) and μ(Bn) are the measure of {x} and Bn, respectively. From Definition 1 Axiom 2, μk(Bn) can be calculated by μk(Bn)=∑x∈Bnμk({x}). So the constraint in Equation (5) is satisfied. After modeling fk and pnk, the prediction of the k-th class can be obtained by using Equation (4). The framework of the attention model is shown in Fig. 1.

The Audio Set dataset is highly unbalanced. Some classes have tens of thousands samples while other classes only contain hundreds of samples. We therefore propose a mini batch balancing strategy, where the occurrence frequency of training samples of the different classes in a mini-batch are kept the same.

The source code of this system is available here222https://github.com/qiuqiangkong/ICASSP2018_audioset. We apply a simple fully connected deep neural network to verify the effectiveness of the proposed attention model. We first apply fully connected layers on the input feature vectors to extract high level representation. We call this mapping as embedded mapping and denote as g. We call h=g(x) as embedded instance. The embedded mapping g

is modeled by three fully connected layers, with 500 hidden units in each layer followed by ReLU

[17] non-linearity and dropout [18] rate of 0.2 to reduce the risk of over-fitting. These configurations are chosen empirically. Then we model the classifier fk and the measure vk on each embedded instance h by the following equation:

Then we may obtain pnk in the n-th bag by:

Finally the prediction of the k-th event in bag Bn is obtained by using Equation (4).

This research is supported by EPSRC grant EP/N014111/1 “Making Sense of Sounds” and Research Scholarship from the China Scholarship Council (CSC).