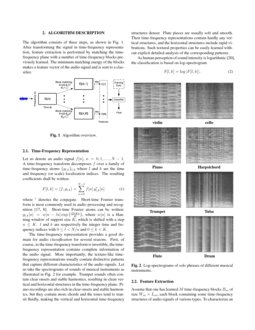 With the increasing use of multimedia data, the need for automatic audio signal classification has become an important issue. Applications such as audio data retrieval and audio file management have grown in importance [1, 16].

Finding appropriate features is at the heart of pattern recognition. For audio classification considerable effort has been dedicated to investigate relevant features of divers types. Temporal features such as temporal centroid, auto-correlation

, zero-crossing rate characterize the waveforms in the time domain. Spectral features such as spectral centroid, width, skewness, kurtosis, flatness are statistical moments obtained from the spectrum

[11, 12]. MFCCs (mel-frequency cepstral coefficients) derived from the cepstrum represent the shape of the spectrum with a few coefficients [13]. Energy descriptors such as total energy, sub-band energy, harmonic energy and noise energy [11, 12] measure various aspects of signal power. Harmonic features including fundamental frequency, noisiness and inharmonicity [4, 11] reveal the harmonic properties of the sounds. Perceptual features such as loudness, shapeness and spread incorporate the human hearing process [20, 10] to describe the sounds. Furthermore, feature combination and selection have been shown useful to improve the classification performance [5].

While most features previously studied have an acoustic motivation, audio signals, in their time-frequency representations, often present interesting patterns in the visual domain. Fig. 2 shows the spectrograms (short-time Fourier representations) of solo phrases of eight musical instruments. Specific patterns can be found repeatedly in the sound spectrogram of a given instrument, reflecting in part the physics of sound generation. By contrast, the spectrograms of different instruments, observed like different textures, can easily be distinguished from one another. One may thus expect to classify audio signals in the visual domain by treating their time-frequency representations as texture images.

In the literature, little attention seems to have been put on audio classification in the visual domain. To our knowledge, the only work of this kind is that of Deshpande and his colleges [3]. To classify music into three categories (rock, classical, jazz) they consider the spectrograms and MFCCs of the sounds as visual patterns. However, the recursive filtering algorithm that they apply seems not to fully capture the texture-like properties of the audio signal time-frequency representation, limiting performance.

In this paper, we investigate an audio classification algorithm purely in the visual domain, with time-frequency representations of audio signals considered as texture images. Inspired by the recent biologically-motivated work on object recognition by Poggio, Serre and their colleagues [14], and more specifically on its variant [19]

The idea of treating instrument timbres just as one would treat visual textures is consistent with basic results in neuroscience, which emphasize the cortex’s anatomical uniformity [9, 7] and its functional plasticity, demonstrated experimentally for the visual and auditory domains in [15]. From that point of view it is not particularly surprising that some common algorithms may be used in both vision and audition, particularly as the cochlea generates a (highly redundant) time-frequency representation of sound.

The algorithm consists of three steps, as shown in Fig. 1

. After transforming the signal in time-frequency representation, feature extraction is performed by matching the time-frequency plane with a number of time-frequency blocks previously learned. The minimum matching energy of the blocks makes a feature vector of the audio signal and is sent to a classifier.

Let us denote an audio signal f[n], n=0,1,…,N−1. A time-frequency transform decomposes f over a family of time-frequency atoms {gl,k}l,k where l and k are the time and frequency (or scale) localization indices. The resulting coefficients shall be written:

denotes the conjugate. Short-time Fourier transform is most commonly used in audio processing and recognition

[17, 8]. Short-time Fourier atoms can be written: gl,k[n]=w[n−lu]exp(i2πknK), where w[n] is a Hanning window of support size K, which is shifted with a step u≤K. l and k are respectively the integer time and frequency indices with 0≤l<N/u and 0≤k<K.

As human perception of sound intensity is logarithmic [20], the classification is based on log-spectrogram

Assume that one has learned M time-frequency blocks Bm of size Wm×Lm, each block containing some time-frequency structures of audio signals of various types. To characterize an audio signal, the algorithm first matches its log-spectrogram S with the sliding blocks Bm, ∀m=1,…,M,

The coefficients C[m], m=1,…,M, are time-frequency translation invariant. They constitute a feature vector {C[m]} of size M of the audio signal. Let us note that the block matching operation (3) can be implemented fast by convolution.

The feature coefficient C[m] is expected to be discriminative if the time-frequency block Bm contains some salient time-frequency structures. In this paper, we apply a simple random sampling strategy to learn the blocks as in [14, 19]: each block is extracted at a random position from the log-spectrogram S of a randomly selected training audio sample. Blocks of various sizes are applied to capture time-frequency structures at different orientations and scales [17]

. Since audio time-frequency representations are rather stationary images and often contain repetitive patterns, the random sampling learning is particularly efficient. Patterns that appear with high probability are likely to be learned.

The classification uses the minimum block matching energy C coefficients as features. While various classifiers such as SVMs can be used, a simple and robust nearest neighbor classifier will be applied in the experiments.

The audio classification scheme is evaluated through musical instrument recognition. Solo phrases of eight instruments from different families, namely flute, trumpet, tuba, violin, cello, harpsichord, piano and drum, were considered. Multiple instruments from the same family, violin and cello for example, were used to avoid over-simplification of the problem.

To prepare the experiments, great effort has been dedicated to collect data from divers sources with enough variation, as few databases are publicly available. Sound samples were mainly excerpted from classical music CD recordings of personal collections. A few were collected from internet. For each instrument at least 822-second sounds were assembled from more than 11 recordings, as summarized in Table 1. All recordings were segmented into non-overlapping excerpts of 5 seconds. 50 excerpts (250 seconds) per instrument are randomly selected to construct respectively the training and test data sets. The training and test data did not contain certainly the same excerpts. In order to avoid bias, excerpts from the same recording were never included in both the training set and the test set.

Human sound recognition performance seems not degrade if the signals are sampled at 11000 Hz. Therefore signals were down-sampled to 11025 Hz to limit the computational load. Half overlapping Hanning windows of length 50 ms were applied in the short-time Fourier transform. Time-frequency blocks of seven sizes 16×16, 16×8 and 8×16, 8×8, 8×4 and 4×8 and 4×4 that cover time-frequency areas of size from 640Hz×800ms to 160Hz×200ms were simultaneously used, same number for each, to capture time-frequency structures at different orientations and scales. The classifier was a simple nearest neighbor classification algorithm.

The confusion matrix in Table

2 reveals the classification details (with 420 features) of each instrument. The highest confusion arrived between the harpsichord and the piano which can produce very similar sounds. Other pairs of instruments that produce potentially sounds of similar nature such as flute and violin were occasionally confused. Some trumpet excerpts were confused with violin and flute — these excerpts were found rather soft and contained mostly harmonics. The drum that is most distinct from the others had the lowest confusion rate. The average accuracy is 85.5%.

In future work, such image features could be combined with more classical acoustic features. In particular, the still largely unsolved problem of instrument separation in polyphonic music may be simplified using this new tool.

Acknowledgements: We are grateful to Emmanuel Bacry, Jean-Baptiste Bellet, Laurent Duvernet, Stéphane Mallat, Sonia Rubinsky and Mingyu Xu for their contribution to the audio data collection.