This paper describes a method based on a sequence-to-sequence learning (Seq2Seq) with attention and context preservation mechanism for voice conversion (VC) tasks. Seq2Seq has been outstanding at numerous tasks involving sequence modeling such as speech synthesis and recognition, machine translation, and image captioning. In contrast to current VC techniques, our method 1) stabilizes and accelerates the training procedure by considering guided attention and proposed context preservation losses, 2) allows not only spectral envelopes but also fundamental frequency contours and durations of speech to be converted, 3) requires no context information such as phoneme labels, and 4) requires no time-aligned source and target speech data in advance. In our experiment, the proposed VC framework can be trained in only one day, using only one GPU of an NVIDIA Tesla K80, while the quality of the synthesized speech is higher than that of speech converted by Gaussian mixture model-based VC and is comparable to that of speech generated by recurrent neural network-based text-to-speech synthesis, which can be regarded as an upper limit on VC performance. 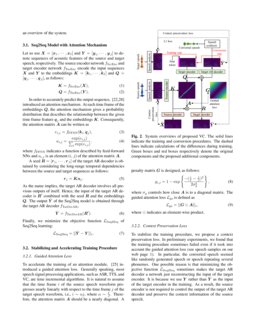 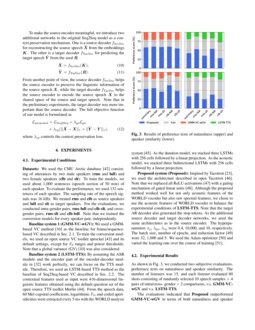 We investigated the training of a shared model for both text-to-speech (...
Mingyang Zhang, et al. ∙

Voice conversion (VC) systems aim to convert para/non- linguistic information included in a given speech waveform while preserving its linguistic information. VC has been applied to various tasks, such as speaker conversion [1, 2, 3] for impersonating or hiding a speaker’s identity, as a speaking aid [4, 5] for overcoming speech impairments, as a style conversion [6, 7] for controlling speaking styles including emotion, and for pronunciation/accent conversion [8, 9] in language learning.

[19, 20], and generative adversarial nets [9]. On the other hand, frameworks requiring no parallel data, called parallel-data-free VCs, have been proposed [1, 3] to avoid the time-consuming job of recording speech for parallel data collection. Notably, the drawbacks of these VCs are the prerequisite of a large number of transcripts and/or difficulty converting the durations of the source speech.

Recently, sequence-to-sequence (Seq2Seq) learning [21, 22] has proved to be outstanding at various research tasks such as text-to-speech synthesis (TTS)  [23, 24, 25] and automatic speech recognition (ASR) [26, 27]. The early Seq2Seq model [21] has encoder and decoder architectures for mapping an input sequence to an encoded representation used by the decoder network to generate an output sequence. To select critical information from the encoded representation in accordance with the output sequence representation, later Seq2Seq models [22, 28]

introduce an attention mechanism. The key advantages of the Seq2Seq learning approach are the ability to train a single end-to-end model directly on the source and target sequences and the capacity to handle input and output sequences of different lengths. In particular, we expect that the Seq2Seq model makes it possible to convert not only acoustic features but also the durations of the source speech to those of the target speech. Moreover, Seq2Seq learning is extensible to semi-supervised learning

In this paper, we propose a Seq2Seq-based VC with attention and context preservation mechanisms111Audio samples can be accessed on our web page: http://www.kecl.ntt.co.jp/people/tanaka.ko/projects/atts2svc/attention_based_seq2seq_voice_conversion.html. Our contributions are as follows:

There are two types of frame/sequence- based VC: VCs requiring parallel data [34, 10, 35] and parallel-data-free VC [1, 3]. The first framework has different procedures of training and conversion, as shown in Fig. 1a. The conversion procedure does not have a time warping function, despite that the training procedure includes a time-alignment step to handle source and target sequences having different lengths. The second framework is a parallel-data-free VC that does not require parallel source and target speech data. To realize parallel-data-free VC, the second framework uses context information [36, 37], adaptation techniques [38, 39], a pre-constructed speaker space [40, 41], and cycle consistency [1, 3]. Although these VC techniques have various training procedures, the conversion procedure does not involve the time warping function. Consequently, the frame/sequence- based VC frameworks do not allow us to convert the durations and the acoustic features of the source speech at the same time. In contrast, our model allows both the acoustic features and the durations to be converted at the same time.

In contrast to the frame/sequence- based VC frameworks, Seq2Seq-based VC frameworks make it possible to convert not only the acoustic features but also the durations of the source speech. Most Seq2Seq-based VCs consist of ASR and TTS modules which are trainable with pairs of speech and its transcript rather than the source and target speech. The ASR module converts the acoustic feature sequence of the source speech into a sequence of context information such as phoneme labels and context posterior probabilities

In order to accurately predict the output sequence,  [22, 28] introduced an attention mechanism. At each time frame of the embeddings Q

, the attention mechanism gives a probability distribution that describes the relationship between the given time frame feature

\boldmathqj and the embeddings K. Consequently, the attention matrix A can be written as

where fFFNN indicates a function described by feed-forward NNs and ai,j is an element (i, j) of the attention matrix A.

A seed \boldmathR=[\boldmathr1,⋯,\boldmath% rJ] of the target AR decoder is obtained by considering the long-range temporal dependencies between the source and target sequences as follows:

Finally, we minimize the objective function LSeq2Seq of Seq2Seq learning:

To accelerate the training of an attention module,  [25] introduced a guided attention loss. Generally speaking, most speech signal processing applications, such as ASR, TTS, and VC, are time incremental algorithms. It is natural to assume that the time frame i of the source speech waveform progresses nearly linearly with respect to the time frame j of the target speech waveform, i.e., i∼αj, where α∼IJ. Therefore, the attention matrix A should be a nearly diagonal. A penalty matrix G is designed, as follows:

where σg controls how close A is to a diagonal matrix. The guided attention loss Lga is defined as

where ⊙ indicates an element-wise product.

To stabilize the training procedure, we propose a context preservation loss. In preliminary experiments, we found that the training procedure sometimes failed even if it took into account the guided attention loss (see speech samples on our web page 1). In particular, the converted speech seemed like randomly generated speech or speech repeating several phonemes. One possible reason is that minimizing the objective function LSeq2Seq sometimes makes the target AR decoder a network just reconstructing the input of the target encoder. It is because we use Y rather than ^\boldmathY as the input of the target encoder in the training. As a result, the source encoder is not required to control the output of the target AR decoder and preserve the context information of the source speech.

To make the source encoder meaningful, we introduce two additional networks to the original Seq2Seq model as a context preservation mechanism. One is a source decoder fSrcDec for reconstructing the source speech ~\boldmathX from the embeddings K. The other is a target decoder fTarDec for predicting the target speech ~\boldmathY from the seed R.

Datasets: We used the CMU Arctic database [42] consisting of utterances by two male speakers (rms and bdl) and two female speakers (clb and slt). To train the models, we used about 1,000 sentences (speech section of 50 min) of each speaker. To evaluate the performance, we used 132 sentences of each speaker. The sampling rate of the speech signals was 16 kHz. We treated rms and clb as source speakers and bdl and slt as target speakers. For the evaluations, we conducted intra-gender pairs, rms-bdl and clb-slt, and cross-gender pairs, rms-slt and clb-bdl. Note that we trained the conversion models for every speaker pair, independently.

Baseline system 1 (GMM-VC-wGV): We used a GMM-based VC method [10] as the baseline for frame/sequence- based VC described in Sec. 2.1. To train the conversion models, we used an open source VC toolkit sprocket [43] and its default settings, except for F0

ranges and power thresholds. Note that a global variance (GV)

Baseline system 2 (LSTM-TTS): By assuming the ASR module and the encoder part of the encoder-decoder module in [32] work perfectly, we can focus on the TTS module. Therefore, we used an LSTM-based TTS method as the baseline of Seq2Seq-based VC described in Sec. 2.2. The contextual features used as input were 416-dimensional linguistic features obtained using the default question set of the open source TTS toolkit Merlin [44]. From the speech data, 60 Mel-cepstral coefficients, logarithmic F0, and coded aperiodicities were extracted every 5 ms with the WORLD analysis system [45]. As the duration model, we stacked three LSTMs with 256 cells followed by a linear projection. As the acoustic model, we stacked three bidirectional LSTMs with 256 cells followed by a linear projection.

. Note that we replaced all ReLU activations

. Note that the target AR decoder also generated the stop tokens. As the additional source decoder and target decoder networks, we used the same architectures as in the source encoder. The hyperparameters

As shown in Fig. 3, we conducted two subjective evaluations, preference tests on naturalness and speaker similarity. The number of listeners was 15, and each listener evaluated 80 shots consisting of randomly selected 10 speech samples × 4 pairs of intra/cross- gender × 2 comparisons, v.s. GMM-VC-wGV and v.s. LSTM-TTS.

The evaluations indicated that Proposed outperformed GMM-VC-wGV in terms of both naturalness and speaker similarity. This is because our method makes it possible to convert not only the acoustic features but also the durations of speech. In contrast, baseline system 1 forces the conversion while preserving the durations of the source speech. Consequently, durations not used in the target speech make the conversion errors larger.

Moreover, Proposed was comparable to LSTM-TTS. This result demonstrates that our method makes it possible to learn the key components for changing the individuality of the speaker while preserving the linguistic information. Notably, our model was trained without any transcript while  [32, 33] used a large number of transcripts.

We proposed a method based on Seq2Seq learning with attention and context preservation mechanisms for VC tasks. Experimental results demonstrated that the proposed method outperformed the conventional GMM-based VC and was comparable to LSTM-based TTS. Extending the proposed method so that it can be used in semi-supervised learning tasks is ongoing work. Note that since we also progressed in a convolutional version of the proposed method [52] simultaneously, we will conduct further evaluations and report the results.

Acknowledgements: This work was supported by a grant from the Japan Society for the Promotion of Science (JSPS KAKENHI 17H01763).