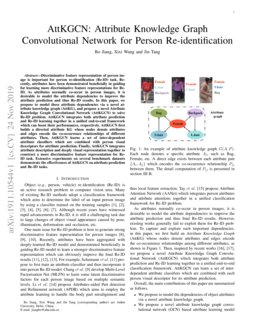 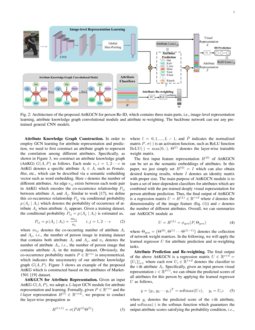 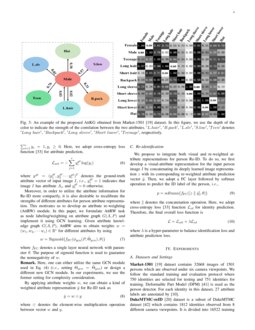 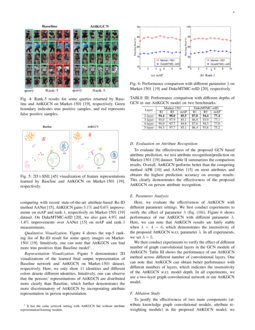 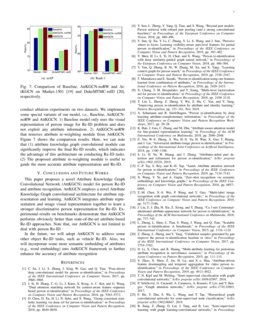 Attribute recognition is a crucial but challenging task due to viewpoint...
Jie Yang, et al. ∙

, person, vehicle) re-identification (Re-ID) is an active research problem in computer vision area. Many of existing Re-ID methods adopt a classification framework which aims to determine the label of an input person image by using a classifier trained on the training samples

[1, 2, 3, 4, 5, 6, 7]. Although recent years have witnessed rapid advancements in Re-ID, it is still a challenging task due to large changes of object visual appearance caused by pose, illumination, deformation and occlusion, etc.

One main issue for Re-ID problem is how to generate strong discriminative feature representation for person images [8, 9, 10]. Recently, attributes have been aggregated with deeply-learned Re-ID model and demonstrated beneficially in guiding Re-ID model to learn a stronger discriminative feature representation which can obviously improve the final Re-ID results [11, 12, 13]. For example, Schumann et al. [11] propose to first train an attribute-classifier and then incorporate it into person Re-ID model. Chang et al. [9] develop Multi-Level Factorisation Net (MLFN) to learn some latent discriminative factors for each person image based on multiple semantic levels. Li et al. [14]

As attributes normally co-occur in person images, it is desirable to model the attribute dependencies to improve the attribute prediction and thus final Re-ID results. However, existing works generally fail to exploit them for Re-ID problem. To capture and explore such important dependencies, in this paper, we first build an Attribute Knowledge Graph (AttKG) whose nodes denote attributes and edges encode the co-occurrence relationships among different attributes, as shown in Figure 1. Then, inspired by recent works [16, 17], we propose a novel Attribute Knowledge Graph Convolutional Network (AttKGCN) which integrates both attribute prediction and Re-ID learning together in a unified end-to-end classification framework. AttKGCN can learn a set of inter-dependent attribute classifiers which are combined with each person visual descriptor for its attribute prediction.

Overall, the main contributions of this paper are summarized as follows.

Extensive experiments on several benchmark datasets demonstrate the effectiveness and benefits of the proposed AttKGCN approach.

As an extension of CNNs from regular grid to irregular graph, graph convolutional networks (GCNs) [23, 24, 25, 26, 27] have been demonstrated very effectively in graph representation and learning. Kipf et al. [23]

In this section, we present our Attribute Knowledge Graph Convolutional Network (AttKGCN) for person attribute prediction and Re-ID tasks. The overall framework of AttKGCN is shown in Figure 2, which contains three main parts, i.e., 1) CNN based image feature extraction, 2) AttKGCN based attribute classifier generation and re-weighting and 3) integration of visual and attribute representations for final Re-ID task. In the following, we present the detail of these modules.

Given an input person image I

, we first extract its visual representation by using a deep feature extractor

ϕcnn. The extractor ϕcnn can use any of pre-trained general CNN base models, such as ResNet-50 [30], VGG [31], or some deeply person-specific feature extraction models, such as PCB [4], HPM [32], etc. For convenience, here we use ResNet-50 [30] as an example for description. In this case, we can first obtain 2048×24×8 feature maps from the "conv5_x" layer when we resize an input image I as 384×128. Then, we obtain the image-level feature z∈Rd (d=2048) by further employing global max_pooling operation as follow,

The aim of the proposed AttKGCN is to learn inter-dependent attribute classifiers via GCN based mapping function. In order to do so, we first construct an attribute knowledge graph (AttKG). Then, we propose to develop an attribute knowledge graph convolutional learning module for attribute representation and prediction. Finally, we propose to integrate attribute learning and visual representation together in a unified manner for the final Re-ID task (see in section III-C).

Attribute Knowledge Graph Construction. In order to employ GCN learning for attribute representation and prediction, we need to first construct an attribute graph to represent the correlation among different attributes. Specifically, as shown in Figure 3, we construct an attribute knowledge graph (AttKG) G(A,P) as follows. Each node vi,i=1,2⋯c in AttKG denotes a specific attribute Ai∈A, such as Female, Hat

, etc., which can be described via a semantic embedding vector such as word embedding. Here

p(Aj∣Ai) which denotes the probability of occurrence of attribute Aj when attribute Ai appears. Given a training dataset, the conditional probability Pij=p(Aj∣Ai)

AttKGCN for Attribute Representation. Given an input AttKG G(A,P), we adopt a L-layer GCN module for attribute representation and learning. Formally, given P∈Rc×c and the l-layer representation H(l)∈Rc×dl, we propose to conduct the layer-wise propagation as

is an activation function, such as ReLU function

The first input feature representation H(0) of AttKGCN can be set as the semantic embeddings of attributes. In this paper, we just simply set H(0)=I which can also obtain desired learning results, where I

denotes an identity matrix with proper size. The main purpose of AttKGCN module is to learn a set of inter-dependent classifiers for attributes which are combined with the pre-trained deeply visual representation for person attribute prediction. Thus, the final output of AttKGCN is a regression matrix

U=H(L)∈Rc×d where d denotes the dimensionality of the image feature (Eq. (1)) and c denotes the number of different attributes. Overall, we can summarize our AttKGCN module as

where Θgcn={Θ(0),Θ(1)⋯Θ(L−1)} denotes the collection of network weight matrices. In the following, we will apply the learned regressor U for attribute prediction and re-weighting tasks.

Attribute Prediction and Re-weighting. The final output of the above AttKGCN is a regression matrix U∈Rc×d={Ui}ci=1 where each row Ui∈R1×d denotes the classifier to the i-th attribute Ai. Specifically, given an input person visual representation z∈Rd×1, we can obtain the predicted scores of all attributes for this person by applying the learned regressor U as follows,

where yi denotes the predicted score of the i-th attribute, and softmax(⋅) is the softmax function which guarantees the output attribute scores satisfying the probability condition, i.e., ∑ci=1yi=1,yi≥0

where ygt=(ygt1,ygt2⋯ygtc)T denotes the ground-truth attribute vector of input image I, i.e., ygti=1 indicates that image I has attribute Ai, and ygti=0 otherwise.

. The purpose of sigmoid function is used to guarantee the nonnegativity of

Remark. Here, one can either utilize the same GCN module used in Eq. (4) (i.e., setting Θgcn=~Θgcn) or design a different new GCN module. In our experiments, we use the former setting for complexity consideration.

By applying attribute weights w, we can obtain a kind of weighted attribute representation ^y for Re-ID task as

where ⊙ denotes the element-wise multiplication operation between vector w and y.

where λ is a hyper-parameter to balance identification loss and attribute prediction loss.

Market-1501 [19] dataset contains 32668 images of 1501 persons which are observed under six camera viewpoints. We follow the standard training and evaluation protocol where 750 identities are selected for testing and 751 identities for training. Deformable Part Model (DPM) [41] is used as the person detector. For each identity in this dataset, 27 attribute labels are annotated by [10].

Evaluation Metrics. Following many previous works [4, 43], we use both Cumulative Matching Characteristic (CMC) (as rank-1, rank-5 and rank-10) and mean Average Precision (mAP) for evaluation, where mAP denotes the mean value of average precision across all queries. For attribute recognition, we calculate the classification accuracy for each attribute as well as the overall averaged accuracy of all these attribute predictions. When testing attribute prediction on Market-1501 [19], we omit the distractor (background) and junks images because they do not have attribute labels [10].

As discussed in section III-A, for each person image, we extract its visual representation by using any person specific deep feature extraction models. In our experiments, we implement Horizontal Pyramid Matching (HPM) network [32] (Baseline model) and use it as our feature extractor ϕcnn

. In our experiment, the batch size is set to 90 and the epoch number is set to 120. The learning rate is set to 0.1 and 0.001 for the feature extraction module and our attribute GCN module, respectively. We train the whole network by using stochastic gradient descent (SGD)

[44] in each mini-batch. The whole training process takes about two hours.

Comparison with CNN-based Methods. We select some representative CNN-based Re-ID methods which mainly include traditional CNN methods, augmented dataset methods, part-based methods and graph-based methods, etc. For example, on Market-1501, comparing with part-based convolutional baseline (PCB) [4], AttKGCN has 8.2% and 2.0% improvements on mAP and rank-1, respectively. Comparing with Horizontal Pyramid Matching (HPM), AttKGCN result improves 2.8% and 0.2% on mAP and rank-1, respectively. On DukeMTMC-reID [20], comparing with PCB [4] and HPM [32], AttKGCN has 5.9% and 1.2% improvements on rank-1 and 12.1% and 3.1% improvements on mAP, respectively. These clearly demonstrate the effectiveness of AttKGCN to enhance the discriminatory ability of part-based Re-ID model by incorporating our attribute knowledge graph learning architecture.

Comparison with Attribute-based Methods. We compare AttKGCN with recent attribute-based methods including ACRN [11], A3M [12], APR [10] and AANet [15]. Table I summarizes the comparison results. Here, we can note that, comparing with recent state-of-the-art attribute-based Re-ID method AANet [15], AttKGCN gains 3.1% and 0.6% improvements on mAP and rank-1, respectively on Market-1501 [19] dataset. On DukeMTMC-reID [20], we also gain 4.9% and 1.4% improvements over AANet [15] on mAP and rank-1 measurements.

Qualitative Visualization. Figure 4 shows the top-5 ranking list of Re-ID result for some query images on Market-1501 [19]. Intuitively, one can note that AttKGCN can find more true positives than Baseline model111 It has the same network setting with AttKGCN but without attribute representation/learning module..

To evaluate the effectiveness of the proposed GCN based attribute prediction, we test attribute recognition/prediction on Market-1501 [19] dataset. Table II summarizes the comparison results. Overall, AttKGCN performs better than the competing method APR [10] and AANet [15] on most attributes and obtains the highest prediction accuracy on average results. This clearly demonstrates the effectiveness of the proposed AttKGCN on person attribute recognition.

To justify the effectiveness of two main components (attribute knowledge graph convolutional module, attribute re-weighting module) in the proposed AttKGCN model, we conduct ablation experiments on two datasets. We implement some special variants of our model, i.e., Baseline, AttKGCN-noRW and AttKGCN. 1) Baseline model only uses the visual representation of person image for Re-ID problem and does not exploit any attribute information. 2) AttKGCN-noRW that removes attribute re-weighting module from AttKGCN. Figure 7 shows the comparison results. Here, we can note that (1) attribute knowledge graph convolutional module can significantly improve the final Re-ID results, which indicates the advantage of this architecture on conducting Re-ID tasks. (2) The proposed attribute re-weighting module is useful to guide the more accurate attribute representation and Re-ID.

In the future, we will adopt AttKGCN to address some other object Re-ID tasks, such as vehicle Re-ID. Also, we will incorporate some more semantic embedding of attributes (e.g., word embedding) into AttKGCN framework to further enhance the accuracy of attribute recognition