This paper proposes attentive statistics pooling for deep speaker embedding in text-independent speaker verification. In conventional speaker embedding, frame-level features are averaged over all the frames of a single utterance to form an utterance-level feature. Our method utilizes an attention mechanism to give different weights to different frames and generates not only weighted means but also weighted standard deviations. In this way, it can capture long-term variations in speaker characteristics more effectively. An evaluation on the NIST SRE 2012 and the VoxCeleb data sets shows that it reduces equal error rates (EERs) from the conventional method by 7.5 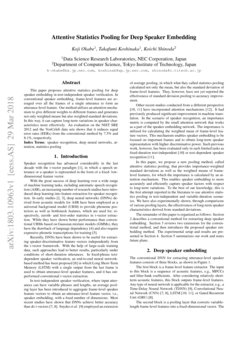 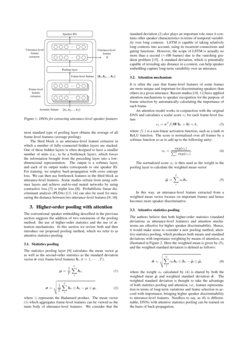 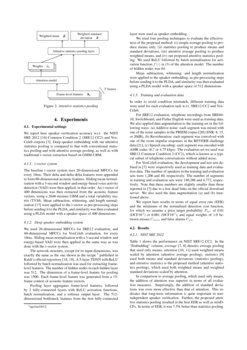 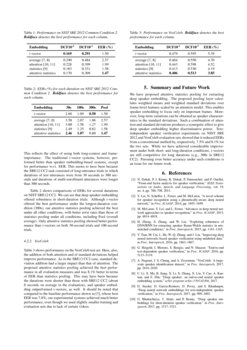 We propose an approach to extract speaker embeddings that are robust to ...
Amber Afshan, et al. ∙

Attention Mechanism in Speaker Recognition: What Does It Learn in Deep Speaker Embedding?

[1], in which a speech utterance or a speaker is represented in the form of a fixed- low-dimensional feature vector.

With the great success of deep learning over a wide range of machine learning tasks, including automatic speech recognition (ASR), an increasing number of research studies have introduced deep learning into feature extraction for speaker recognition. In early studies

, deep neural networks (DNNs) derived from acoustic models for ASR have been employed as a universal background model (UBM) to provide phoneme posteriors as well as bottleneck features, which are used for, respectively, zeroth- and first-order statistics in i-vector extraction. While they have shown better performance than conventional UBMs based on Gaussian mixture models (GMMs), they have the drawback of language dependency

Recently, DNNs have been shown to be useful for extracting speaker-discriminative feature vectors independently from the i-vector framework. With the help of large-scale training data, such approaches lead to better results, particularly under conditions of short-duration utterances. In fixed-phrase text-dependent speaker verification, an end-to-end neural network-based method has been proposed [6]

in which Long Short-Term Memory (LSTM) with a single output from the last frame is used to obtain utterance-level speaker features, and it has outperformed conventional i-vector extraction.

In text-independent speaker verification, where input utterances can have variable phrases and lengths, an average pooling layer has been introduced to aggregate frame-level speaker feature vectors to obtain an utterance-level feature vector, i.e., speaker embedding, with a fixed number of dimensions. Most recent studies have shown that DNNs achieve better accuracy than do i-vectors [7, 8]. Snyder et al. [9] employed an extension of average pooling, in which what they called statistics pooling calculated not only the mean, but also the standard deviation of frame-level features. They, however, have not yet reported the effictiveness of standard deviaion pooling to accuracy improvement.

Other recent studies conducted from a different perspective [10, 11] have incorporated attention mechanisms [12]. It had previously produced significant improvement in machine translation. In the scenario of speaker recognition, an importance metric is computed by the small attention network that works as a part of the speaker embedding network. The importance is utilized for calculating the weighted mean of frame-level feature vectors. This mechanism enables speaker embedding to be focused on important frames and to obtain long-term speaker representation with higher discriminative power. Such previous work, however, has been evaluated only in such limited tasks as fixed-duration text-independent [10] or text-dependent speaker recognition [11].

In this paper, we propose a new pooling method, called attentive statistics pooling, that provides importance-weighted standard deviations as well as the weighted means of frame-level features, for which the importance is calculated by an attention mechanism. This enables speaker embedding to more accurately and efficiently capture speaker factors with respect to long-term variations. To the best of our knowledge, this is the first attempt reported in the literature to use attentive statistics pooling in text-independent and variable-duration scenarios. We have also experimentally shown, through comparisons of various pooling layers, the effectiveness of long-term speaker characteristics derived from standard deviations.

The remainder of this paper is organized as follows: Section 2 describes a conventional method for extracting deep speaker embedding. Section 3 reviews two extensions for the conventional method, and then introduces the proposed speaker embedding method. The experimental setup and results are presented in Section 4. Section 5 summarizes our work and notes future plans.

The conventional DNN for extracting utterance-level speaker features consists of three blocks, as shown in Figure 1.

The first block is a frame-level feature extractor. The input to this block is a sequence of acoustic features, e.g., MFCCs and filter-bank coefficients. After considering relatively short-term acoustic features, this block outputs frame-level features. Any type of neural network is applicable for the extractor, e.g., a Time-Delay Neural Network (TDNN) [9]

The third block is an utterance-level feature extractor in which a number of fully-connected hidden layers are stacked. One of these hidden layers is often designed to have a smaller number of units (i.e., to be a bottleneck layer), which forces the information brought from the preceding layer into a low-dimensional representation. The output is a softmax layer, and each of its output nodes corresponds to one speaker ID. For training, we employ back-propagation with cross entropy loss. We can then use bottleneck features in the third block as utterance-level features. Some studies refrain from using softmax layers and achieve end-to-end neural networks by using contrastive loss

[7] or triplet loss [8]. Probabilistic linear discriminant analysis (PLDA) [13, 14] can also be used for measuring the distance between two utterance-level features [9, 10].

The conventional speaker embedding described in the previous section suggests the addition of two extensions of the pooling method: the use of higher-order statistics and the use of attention mechanisms. In this section we review both and then introduce our proposed pooling method, which we refer to as attentive statistics pooling.

The statistics pooling layer [9] calculates the mean vector μ as well as the second-order statistics as the standard deviation vector σ over frame-level features ht (t=1,⋯,T).

where ⊙ represents the Hadamard product. The mean vector (1) which aggregates frame-level features can be viewed as the main body of utterance-level features. We consider that the standard deviation (2) also plays an important role since it contains other speaker characteristics in terms of temporal variability over long contexts. LSTM is capable of taking relatively long contexts into account, using its recurrent connections and gating functions. However, the scope of LSTM is actually no more than a second (∼

100 frames) due to the vanishing gradient problem

[15]. A standard deviation, which is potentially capable of revealing any distance in a context, can help speaker embedding capture long-term variability over an utterance.

It is often the case that frame-level features of some frames are more unique and important for discriminating speakers than others in a given utterance. Recent studies [10, 11] have applied attention mechanisms to speaker recognition for the purpose of frame selection by automatically calculating the importance of each frame.

et for each frame-level feature

is a non-linear activation function, such as a tanh or ReLU function. The score is normalized over all frames by a softmax function so as to add up to the following unity:

In this way, an utterance-level feature extracted from a weighted mean vector focuses on important frames and hence becomes more speaker discriminative.

where the weight αt calculated by (4) is shared by both the weighted mean ~μ and weighted standard deviation ~σ. The weighted standard deviation is thought to take the advantage of both statistics pooling and attention, i.e., feature representation in terms of long-term variations and frame selection in accord with importance, bringing higher speaker discriminability to utterance-level features. Needless to say, as (6) is differentiable, DNNs with attentive statistics pooling can be trained on the basis of back-propagation.

We report here speaker verification accuracy w.r.t. the NIST SRE 2012 [16] Common Condition 2 (SRE12 CC2) and VoxCeleb corpora [7]. Deep speaker embedding with our attentive statistics pooling is compared to that with conventional statistics pooling and with attentive average pooling, as well as with traditional i-vector extraction based on GMM-UBM.

The baseline i-vector system uses 20-dimensional MFCCs for every 10ms. Their delta and delta-delta features were appended to form 60-dimensional acoustic features. Sliding mean normalization with a 3-second window and energy-based voice activity detection (VAD) were then applied, in that order. An i-vector of 400 dimensions was then extracted from the acoustic feature vectors, using a 2048-mixture UBM and a total variability matrix (TVM). Mean subtraction, whitening, and length normalization [17] were applied to the i-vector as pre-processing steps before sending it to the PLDA, and similarity was then evaluated using a PLDA model with a speaker space of 400 dimensions.

The network structure, except for its input dimensions, was exactly the same as the one shown in the recipe 111egs/sre16/v2 published in Kaldi’s official repository [18, 19]

Mean subtraction, whitening, and length normalization were applied to the speaker embedding, as pre-processing steps before sending it to the PLDA, and similarity was then evaluated using a PLDA model with a speaker space of 512 dimensions.

In order to avoid condition mismatch, different training data were used for each evaluation task w.r.t. SRE12 CC2 and VoxCeleb.

For SRE12 evaluation, telephone recordings from SRE04-10, Switchboard, and Fisher English were used as training data. We also applied data augmentation to the training set in the following ways: (a) Additive noise: each segment was mixed with one of the noise samples in the PRISM corpus [20] (SNR: 8, 15, or 20dB), (b) Reverberation: each segment was convolved with one of the room impulse responses in the REVERB challenge data [21], (c) Speech encoding: each segment was encoded with AMR codec (6.7 or 4.75 kbps). The evaluation set we used was SRE12 Common Condition 2 (CC2), which is known as a typical subset of telephone conversations without added noise.

We report here results in terms of equal error rate (EER) and the minimum of the normalized detection cost function, for which we assume a prior target probability

In comparison to average pooling, which used only means, the addition of attention was superior in terms of all evaluation measures. Surprisingly, the addition of standard deviations was even more effective than that of attention. This indicates that long-term information is quite important in text-independent speaker verification. Further, the proposed attentive statistics pooling resulted in the best EER as well as minDCFs. In terms of EER, it was 7.5% better than statistics pooling. This reflects the effect of using both long-context and frame-importance. The traditional i-vector systems, however, performed better than speaker embedding-based systems, except for performance w.r.t. EER. This seems to have been because the SRE12 CC2 task consisted of long-utterance trials in which durations of test utterances were from 30 seconds to 300 seconds and durations of multi-enrollment utterances were longer than 300 seconds.

Table 3 shows performance on the VoxCeleb test set. Here, also, the addition of both attention and of standard deviations helped improve performance. As in the SRE12 CC2 case, standard deviation addition had a larger impact than that of attention. The proposed attentive statistics pooling achieved the best performance in all evaluation measures and was 8.1% better in terms of EER than statistics pooling. This may have been because the durations were shorter than those with SRE12 CC2 (about 8 seconds on average in the evaluation), and speaker embedding outperformed i-vectors, as well. It should be noted that compared to the baseline performance shown in [7], whose best EER was 7.8%, our experimental systems achieved much better performance, even though we used slightly smaller training and evaluation sets due to lack of certain videos.

We have proposed attentive statistics pooling for extracting deep speaker embedding. The proposed pooling layer calculates weighted means and weighted standard deviations over frame-level features scaled by an attention model. This enables speaker embedding to focus only on important frames. Moreover, long-term variations can be obtained as speaker characteristics in the standard deviations. Such a combination of attention and standard deviations produces a synergetic effect to give deep speaker embedding higher discriminative power. Text-independent speaker verification experiments on NIST SRE 2012 and VoxCeleb evaluation sets showed that it reduced EERs from a conventional method by, respectively, 7.5% and 8.1% for the two sets. While we have achieved considerable improvement under both short- and long-duration conditions, i-vectors are still competitive for long durations (e.g., 300s in SRE12 CC2). Pursuing even better accuracy under such conditions is an issue for our future work.