Competitive diving is a well recognized aquatic sport in which a person dives from a platform or a springboard into the water. Based on the acrobatics performed during the dive, diving is classified into a finite set of action classes which are standardized by FINA. In this work, we propose an attention guided LSTM-based neural network architecture for the task of diving classification. The network takes the frames of a diving video as input and determines its class. We evaluate the performance of the proposed model on a recently introduced competitive diving dataset, Diving48. It contains over 18000 video clips which covers 48 classes of diving. The proposed model outperforms the classification accuracy of the state-of-the-art models in both 2D and 3D frameworks by 11.54 network is able to localize the diver in the video frames during the dive without being trained with such a supervision. 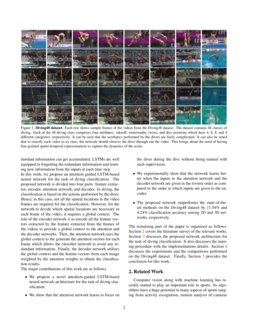 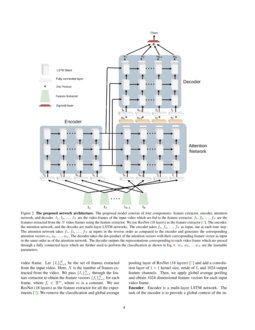 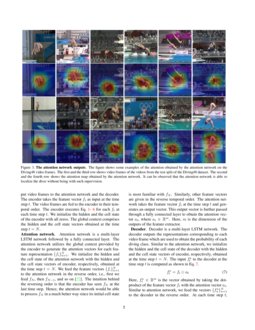 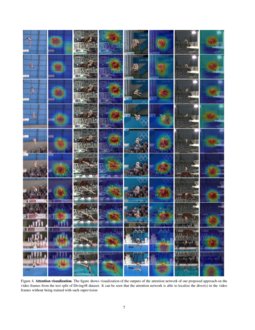 In recent years, automatic interpretation of sports has gained a keen interest. It is a challenging task especially when it involves rapid changes and long-term dynamics. The increase in the processing power and accessibility to the huge data through broadcasting on digital media has enabled computer vision and machine learning techniques to perform several interesting and important tasks in this area such as object detection, action recognition, and player tracking.

In this work, we focus on competitive diving, which is a very popular sport in Olympics. In diving, a person jumps from a diving platform or a springboard and then performs some acrobatics before descending into the water. Based on the acrobatics performed during the dive, diving is classified into a finite set of action classes which are unambiguous in nature. These classes are standardized by FINA [1]

. The differences in the acrobatics performed in various classes of diving are very subtle. The difference arises in the duration which starts with the diver standing on a diving platform or a springboard and ends at the moment he/she dives into the water. This brings about the need of having fine-grained spatio-temporal representations to capture the subtle differences between the different classes of dives. Also, these representations should capture the long-term dynamics of the video for the task of diving classification.

In recent years, neural network based approaches have shown very promising results in the task of action recognition. This success is attributed to the introduction of several large datasets like UCF101 [21], HMDB51 [14], PoseTrack [10], Sports1M [11], and Kinetics [12]. These datasets contain videos of several types of actions. The networks are trained on these datasets to learn the task of action recognition. However, these datasets have strong static bias [16] which lets the network perform well through learning static representations while making the dynamics present in the scene less meaningful for action recognition. Recently, Li et al. introduced a new dataset, Diving48, which contains over 18000 video clips of competitive diving actions [16]. It contains 48 classes of diving. They defined each of the 48 diving classes by a combination of four attributes: takeoff, somersaults, twists, and dive positions which have 4,8,8, and 4 different categories, respectively. They compared the representation biases of Diving48 with the existing datasets. They showed that the Diving48 has much smaller representation bias in comparison to several standard datasets. This brings about the need of capturing the scene dynamics in a proficient manner in order to perform well on this dataset. Figure 1 shows a few examples of diving videos from the Diving48 dataset. It can be seen that the moves are really complex and vary over the time of flight which makes it necessary to capture the fine-grained representations in order to capture those subtle movements along with the long-term dynamics. Long short-term memory (LSTM) is a variant of recurrent neural networks. It overcomes the problem of vanishing/exploding gradients in recurrent neural networks and is proven to be very successful in several computer vision and language processing tasks which involves long-term dependencies. They can accumulate the information for a long period of time. However, over a long period, several redundant information can get accumulated. LSTMs are well equipped in forgetting the redundant information and learning new information from the inputs at each time step.

The major contributions of this work are as follows.

The remaining part of the paper is organized as follows. Section 2 covers the literature survey of the relevant works. Section 3 discusses the proposed network architecture for the task of diving classification. It also discusses the training procedure with the implementations details. Section 4 discusses the experiments and the comparisons performed on the Diving48 dataset. Finally, Section 5 provides the conclusion for this work.

Computer vision along with machine learning has recently started to play an important role in sports. Its algorithms have a huge potential in many aspects of sports ranging from activity recognition, motion analysis of cameras and players, tracking players and objects, automatic annotation of sports footage, event detection, analysis of player injuries, spectator monitoring, performance assessment, and enhanced viewing. Here, we describe some of the recent works that use computer vision and machine learning for sports related tasks. Shukla et al. introduced a model that uses both event-based and excitement-based features to extract important events and cues from video shots in a cricket match in order to automatically generate match highlights [20]. Li et al.

. Their two stage model first detects the players on the court and then recognize their jersey number using a convolutional neural network.

. They use a bagged tree classifier to first classify occlusion conditions. The number of players are then estimated by using the maximum likelihood of probability density based approach by further classifying the occluded players. Ullah and Cheikh in

proposed a Directed Sparse Graphical Model (DSGM) for multi-target tracking in football, basketball, and sprint videos. The DGSM model finds a set of reliable tracks for the targets without any heuristics and keeps the computational complexity very low through the design of the graph. Reno

et al. introduced a CNN architecture for detecting ball in tennis games [18]. Hwang et al. proposed a model that combines global and local information for athlete pose estimation [9]. They first extract global information using a ResNet-101 based global network that is trained to regress a heat map representing parts’ locations. The output features from the global network are then passed to the local network which learns spatial information using position sensitive score maps. Fani et al. proposed an Integrated Stacked Hourglass Network (ISHN) for recognizing player actions in hockey videos [5]. The ISHN network has three components. The first component is the latent pose estimator, the second transforms latent features to a common frame of reference, and the third performs action recognition. Now, we discuss some of the important LSTM based works for activity recognition and trajectory prediction. Donahue et al. proposed long-term recurrent convolutional networks for activity recognition for learning long-term dependencies [4]. Alahi et al. introduced social LSTM for predicting human trajectories in crowded spaces [2]. They viewed the problem of trajectory prediction as a sequence generation task, where interest is in predicting the future trajectory of people based on their past positions. Liu et al. proposed a spatio-temporal LSTM based model with trust gates for 3D human action recognition [17]. Veeriah et al. proposed a differential recurrent neural network for action recognition [27]. Fragkiadaki et al. proposed an encoder-recurrent-decoder (ERD) model for recognition and prediction of human body pose in videos [6].

Decoder. Decoder is a multi-layer LSTM network. The decoder outputs the representations corresponding to each video frame which are used to obtain the probability of each diving class. Similar to the attention network, we initialize the hidden and the cell state of the decoder with the hidden and the cell state vectors of encoder, respectively, obtained at the time step t=N. The input fat to the decoder at the time step t is computed as shown in Eq. 7.

Here, fat∈Rm is the vector obtained by taking the dot-product of the feature vector ft with the attention vector at. Similar to attention network, we feed the vectors {fan}Nn=1 to the decoder in the reverse order. At each time step t, we feed fat to the decoder to obtain representation frt∈Rp for fat. The decoder outputs the set of representations {frn}Nn=1 which are passed through a fully connected layer fc to obtain {^on}Nn=1 which are further used to perform the classification as shown in Eq. 8.

Here, wrn∈R is a learnable parameter, where n=1,2,…,N. ^o∈Rc is passed through a sigmoid layer to obtain the probability of each diving class.

Diving48 is an action recognition dataset which contains 18,404 videos clips of competitive diving actions. The clips cover 48 diving classes which are standardized by FINA [1]. There are 16,067 clips in the training set and 2,337 clips in the test set. They represent each diving class as a sequence of four attributes: Take-off, Somersault, Twist, and Flight position which are divided into 4,8,8, and 4 classes, respectively. In the dataset, it is ensured that the clips from the same competition are assigned to the same set.

Instead of directly training the network to identify the diving classes, we train the network to identify the four attributes of the diving classes. The output of the decoder is passed through four fully connected layers fc1,fc2,fc3, and fc4 which predict the classes of the four attributes, i.e., Take-off, Somersault, Twist, and Flight position, respectively. Let {^o1n}Nn=1, {^o2n}Nn=1, {^o3n}Nn=1, and {^o4n}Nn=1 be the outputs of fc1,fc2,fc3, and fc4 for N

Here, S is the cross-entropy loss and win is a learnable parameter where i=1,2,3, and 4 and n=1,2,…,N. By training the network with the loss function Lr, we learn the representations {frn}Nn=1, which are the output of the decoder. We then remove the fully connected layers fc1,fc2,fc3, and fc4, and add the fully connected layer fc on the output of the decoder network. We keep the trained weights of the network and only train fc to predict the diving class using the loss function S(^o). Here, S is the cross-entropy loss and ^o is defined in Eq. 8. We use Adam for the weight update with the initial learning rate of 10−4, β1=0.9, β2=0.999, and ϵ=10−8 [13]. We apply a dropout of 0.2 on all the fully connected layers. We use 512 hidden units in the encoder and the attention networks and 256 hidden units in the decoder network. For the data augmentation, while training, we resize the shorter edge of each video frame of the video to 245 pixels and then, we randomly extract a volume of 224×224×N. The N

frames are picked randomly from the input video following a uniform distribution. We have used 64 frames of each video for training and testing the network, i.e.,

. We implemented our network and performed all the experiments using PyTorch on a system with Intel i7-7820X processor, 32 GB RAM, and an Nvidia Titan Xp GPU.

In this section, we evaluate the effectiveness of the proposed model on the Diving48 dataset. We also evaluate the effect of the design choices by performing multiple ablation studies. We show that the attention network is able to localize the diver in the video frames without being trained with such supervision.

Here, At is the attention map for the video frame which is provided as the input to the decoder at time step t, at=(a1t,a2t,…,amt) is the output vector of the attention network and {Fi}mi=1 are the feature maps of the corresponding video frame obtained from the last layer of the feature extractor [30]. We upsample At to the size of the corresponding input image to overlay it. In Figure 4, it can be seen that the network is not only able to localize the diver but also able to follow it through the video without being trained for such a task. The network is observed to ignore the static parts of the scene and is also observed to focus on the divers which is actually relevant to the task.