Attention to Refine through Multi-Scales for Semantic Segmentation

This paper proposes a novel attention model for semantic segmentation, which aggregates multi-scale and context features to refine prediction. Specifically, the skeleton convolutional neural network framework takes in multiple different scales inputs, by which means the CNN can get representations in different scales. The proposed attention model will handle the features from different scale streams respectively and integrate them. Then location attention branch of the model learns to softly weight the multi-scale features at each pixel location. Moreover, we add an recalibrating branch, parallel to where location attention comes out, to recalibrate the score map per class. We achieve quite competitive results on PASCAL VOC 2012 and ADE20K datasets, which surpass baseline and related works. 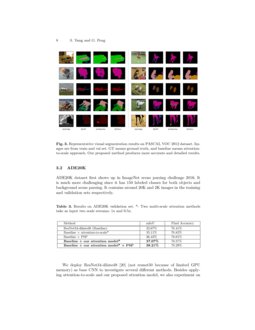 With the booming of deep learning, many visual tasks have made significant progress. For instance, semantic segmentation, also known as image labeling or scene parsing which aims at giving label for each pixel, has made great breakthroughs in recent years. Efficient semantic segmentation can facilitate plenty of other missions such as image editing.

Recent approaches for semantic segmentation are all almost based on Fully Convolutional Network (FCN) [13], which outperforms the traditional methods by replacing the fully connected layers with convolutional layers in classification network. The follow-up works have extended the FCN from several points of view. Some works [2, 14] have introduced the coarse-to-fine structure with upsample modules like deconvolution to give the final mask prediction. And due to the usage of pooling layer, spatial size has decreased largely, for which dilated (or atrous) convolution [20, 6] has been employed to increase the resolution of intermediate features and hold the same receptive field simultaneously.

Other works mainly focus on two directions. One is to post-process the prediction from the CNN through Conditional Random Field (CRF) to get smooth output. These works [1, 6, 22] are actually ameliorating the localizing ability of the framework. Another direction is to ensemble multi-scale features. Because features from lower layers in CNN have more spatial information and ones from deeper layers have more semantic meaning and less location information, it is rational to integrate representations from various positions since location information is important for semantic segmentation. The first type method for multi-scale combines features from different stages with skip connection to get fused features for mask prediction, such as [6, 13, 18]. And another type is to resize input to several scales and pass each one with a shared network, it will produce final prediction using the fusion of multi-stream resulting features. There are also methods trying to exploit the capability of global context information, like ParseNet [12] which adds a global pooling branch to extract contextual features. And PSPNet [21] adopts a pyramid pooling module to embed global context information to achieve accurate scene perception.

Attention model has been all the rage in natural language processing area, such as

, and it has also shown its effectiveness in computer vision and multimedia community recently

[19, 17, 4, 16]. It allows model to focus on specific relevant features. Attention-to-scale [7] is the first approach to introduce attention model into semantic segmentation for multi-scale. It takes in different scale inputs. For each scale, the attention model produces a weight map to weight features at each location, and the weighted sum of score maps across all scales is then used for mask prediction. But it only utilizes the feature from specific layer to generate attention, which may omit many contextual details, and this can not ensure that the attention model can guide network to get precise results.

Referring to attention-to-scale, we propose a new attention model in this paper, which aslo takes in multi-scale inputs but integrates features from different layers, similar to hypercolumns [10]. The attention model has two branch outputs, i.e., one for location attention through which it drives network to focus on large objects or regions for small scale input and pay attention to small targets for large scale just like attention-to-scale, another branch is to recalibrate the score map per class since resulting features from several stages carry contextual information. The outputs from attention model will be applied to multi-scale stream predictions, and final mask prediction is a weighted sum of all these streams.

Our contributions are two aspects as follows:

Like we mention before higher-layer features contain more semantic information and lower ones carry more location information. Fusion of information from several spatial scales will improve the accuracy of prediction in semantic segmentation. In addition, multi-scale aggregation also catch more contextual representations since some operations like pooling will dispose of the global context information, leading to local ambiguities which will be discussed later. It is the reason why multi-scale fusion gained a lot of popularity.

Inspired by hypercolumns, we adopt the the philosophy of it. Like depicted in Figure 1

, features from different stages in CNN get upsampled to same size and then we concatenate them all. To keep computation cost at bay, we choose the size of features after two pooling operation as the appointed resolution to do upsampling by bilinear interpolation. Through this way, the acquired features carry more localization and context information.

It is well-known that the structure of network has an impact on the range of pixels of the input image which correspond to a pixel of the feature map. In other words, filters will implicitly learn to detect features at specific scales due to the fixed receptive field. To accomplish our motivation of attention model which is to adaptively put weights on corresponding scale, we add a unique convolutional layer with unequal dilation for each scale. This process is demonstrated in Figure 2. Convolution with large dilation has large field of view (FOV) and is expected to catch the long-span interlink of pixels for large scale object or region in small scale stream, and small dilation convolution is deployed to encode target of small scale in large scale stream. After the dilated convolution, the features will be concatenated, resulting one contains much more abundant and context information.

By the way, the two-stream CNNs in Figure 1 are actually the same one when implemented in practice, just like Siamese Network.

In common with attention-to-scale, the attention model will produce soft weights for multiple scales (we refer to it as location attention). Assuming the number of input scale is n, and the size of mask prediction, which is denoted as Ps for scale s, is W x H, nClass means the class number of the objects. The location attention output by the model is shared across all channels. After the refinement of local attention, the mask predictions, denoted as Msi, are described as:

The lsi is computed by:

where wlsi is the score map produced by the location attention branch at position i∈[0,W∗H−1] for scale s

, before the softmax layer of course.

And since the fused features fed to the attention model contain context information, we want to make full use of them to eliminate some degrees of class ambiguity, i.e., to utilize contextual relationship to enhance the ability of classification. The lack of ability to collect contextual information may increase the chance of misclassification in certain circumstances. To take an example, neural network sometimes tends to take apart a large-scale object into several regions of different classes [11]

, or maybe classify a boat on the river as a car and so on in scene parsing

[21] (these can be observed among visualization results in section 3.1). To deal with these issues, we add a recalibrating branch parallel to location attention. It has the same architecture as location attention branch which means containing two convolutional layers, except that output channel changes to nClass and sigmoid activation is deployed instead of softmax. This branch aims to find the interdependencies between adjacent objects or regions using the integrating features, and its output is used for recalibrating the score maps before the location attention refinement. Because the contextual relationship stay the same in different scale, the recalibrating outputs are shared across all scales. So the final mask prediction for each stream can be described as:

As for the loss function, we follow the setting of attention-to-scale,

i.e., the total loss function is sum of 1+S cross entropy loss functions for segmentation, where S symbolizes number of scales and one for final prediction.

We experiment our method on two benchmark datasets: PASCAL VOC 2012 [8]

For all training, we only train the network with 2 scales, i.e., 1x upsample and 0.5x upsample. As for the different dilation, we set it to 2 for small scale and 12 for large scale. And we use the poly learning rate policy [12], meaning current learning rate is computed by multiplying (1−itermax_iter)power

to base learning rate, where the power is set to 0.9. We refer to the layers in the last stage where gives mask prediction as decoder, layers previous to decoder are encoder. Learning rate of decoder is 10 times that of encoder. All experiments are implemented using PyTorch on a NVIDIA TITAN Xp GPU.

The PASCAL VOC 2012 [8] segmentation dataset consists of 20 foreground object classes and a background class. The PASCAL VOC 2012 dataset we use is augmented with extra annotation by Hariharan et al. [9], resulting in 10582 training images. In experiment we report performance results on original PASCAL VOC 2012 validation set.

Merged with Pooling in Table 1 means adopting pooling operation as fusion approach for multi-scale stream instead of attention model. It can be seen that our method surpasses baseline and attention-to-scale by 6.58% and 3.24% respectively. Furthermore, we conduct additional experiments for ablation study of each module in our method. We cut off certain modules from our proposed method, re-train and report the performance of remainder, which is shown in Table 2. Please noted that base model without all these modules is actually attention-to-scale approach. As you can see, the modules we design indeed take effect on segmentation task.

Since the attention-to-scale has verified the motivation which we share with by visualizing weight maps produced by the attention model, we don’t replicate this experiment on our proposed model. Turning to qualitative results, some representative visual comparisons are provided between attention-to-scale and our method in Figure 3

. We observe that unlike attention-to-scale, our method can get finer contour in some cases and probability of breaking down a large-scale object into several pieces decreases. Our results contain much more detailed structure and more accurate pixel-level categorization, which we posit it comes from the utilization of multi-scale and context information as well as the extra branch.

ADE20K dataset first shows up in ImageNet scene parsing challenge 2016. It is much more challenging since it has 150 labeled classes for both objects and background scene parsing. It contains around 20K and 2K images in the training and validation sets respectively.

We deploy ResNet34-dilated8 [20] (not resnet50 because of limited GPU memory) as base CNN to investigate several different methods. Besides applying attention-to-scale and our proposed attention model, we also experiment on Pyramid Scene Parsing (PSP) [21] module as a comparison, which is a state-of-the-art approach on ADE20K dataset to the best of our knowledge. The experiment results are presented in Table 3. The PSP here doesn’t contain auxiliary loss in original paper. We can see that our proposed attention model outperforms other methods, and achieves 4.40% improvement on mIoU over baseline. Besides, we also embed both the PSP module and proposed attention module in baseline and it obtains further performance improvement.

In this paper, we propose a novel attention model for semantic segmentation. The whole CNN framework takes in multi-scale streams as input. Features from different stage of CNN are fused, then resulting one in each scale goes through convlutional layers with different dilation, which are expected to catch distinctive context relationship for different scales. After that, all these features get concatenated and resulting one is fed into two parallel convolution output branches of the attention model. One of the branches is location attention, aiming to pay soft attention to each location across channels. Another one is designed to fully utilize contextual information to deal with class ambiguity by recalibrating the prediction per location for each class. Experiments on PASCAL VOC 2012 and ADE20K show that proposed method make a significant improvement.