The Madry Lab recently hosted a competition designed to test the robustness of their adversarially trained MNIST model. Attacks were constrained to perturb each pixel of the input image by a scaled maximal L_∞ distortion ϵ = 0.3. This discourages the use of attacks which are not optimized on the L_∞ distortion metric. Our experimental results demonstrate that by relaxing the L_∞ constraint of the competition, the elastic-net attack to deep neural networks (EAD) can generate transferable adversarial examples which, despite their high average L_∞ distortion, have minimal visual distortion. These results call into question the use of L_∞ as a sole measure for visual distortion, and further demonstrate the power of EAD at generating robust adversarial examples. 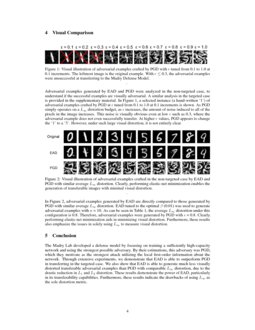 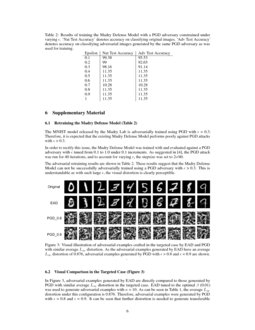 Deep neural networks (DNNs) achieve state-of-the-art performance in various tasks in machine learning and artificial intelligence, such as image classification, speech recognition, machine translation and game-playing. Despite their effectiveness, recent studies have illustrated the vulnerability of DNNs to adversarial examples

(Szegedy et al., 2013; Goodfellow et al., 2015). For instance, a carefully designed perturbation to an image can lead a well-trained DNN to misclassify. Even worse, effective adversarial examples can also be made virtually indistinguishable to human perception. Adversarial examples crafted to evade a specific model can even be used to mislead other models trained for the same task, exhibiting a property known as transferability.

To address this problem, the adversarial robustness of neural networks was studied through the lens of robust optimization in (Madry et al., 2017), leading to an adversarially robust model for image classification we term as the “Madry Defense Model”. An attack challenge111https://github.com/MadryLab/mnist_challenge was proposed for the MNIST dataset to test the defense, however, attacks were constrained to perturb each pixel by at most ϵ = 0.3, a scaled maximal L∞ distortion. This rule greatly reduces the power of attacks which are not optimized for the L∞ distortion metric, and imposes an unrealistic constraint on the attacker.

To justify the limitation of the L∞ constraint, we conduct extensive experiments on the Madry Defense Model to investigate the transferability properties of the state-of-the-art adversarial attacks without the L∞ constraint. We find that L1-based adversarial examples generated by EAD, which is short for Elastic-net Attack to DNNs (Chen et al., 2017), readily transfer in both the targeted and non-targeted cases, and despite the high L∞ distortion, the visual distortion on the adversarial examples is minimal. These results call into question the use of L∞ to quantify visual distortion, and further demonstrate the state-of-the-art transferability properties of EAD.

The Madry Defense Model is a sufficiently high capacity network trained against the strongest possible adversary, which they deem to be Projected Gradient Descent (PGD) starting from random perturbations around the natural examples (Madry et al., 2017)

. We evaluate using the MNIST model, as generating visually imperceptible adversarial examples using this dataset is difficult due to its simple, grayscale nature. If this attack objective can be achieved, our methodology can be applied to more realistic, color datasets, like CIFAR-10 and ImageNet

(Deng et al., 2009). For the MNIST model, 40 iterations of PGD were run, with a step size of 0.01. Gradient steps were taken in the L∞ norm. The network was trained and evaluated against perturbations of size no greater than ϵ = 0.3. We experimentally show in the supplementary material that this is the maximum ϵ for which the Madry Defense Model can be successfully adversarially trained.

β controls the trade-off between L1 and L2 minimization. We test EAD in both the general case and the special case where β is set to 0, which is equivalent to the C&W L2 attack. We tune the κ

“confidence” hyperparameter, which controls the necessary margin between the predicted probability of the target class and that of the rest, in our experiments. Full detail on the implementation is provided in the supplementary material.

ϵ, which controls the allowable L∞ distortion. Full detail on the implementation is provided in the supplementary material.

In Table 1, the results for tuning κ for C&W and EAD at β = 0.01 are provided, and are presented with the results for PGD and I-FGM at the lowest ϵ values at which the highest ASR was yielded, for comparison. It is observed that in both the targeted case and the non-targeted case, EAD outperforms C&W at all κ. Furthermore, in the targeted case, at the optimal κ = 50, EAD’s adversarial examples surprisingly have lower average L2 distortion.

The Madry Lab developed a defense model by focusing on training a sufficiently high-capacity network and using the strongest possible adversary. By their estimations, this adversary was PGD, which they motivate as the strongest attack utilizing the local first-order information about the network. Through extensive experiments, we demonstrate that EAD is able to outperform PGD in transferring in the targeted case. We also show that EAD is able to generate much less visually distorted transferable adversarial examples than PGD with comparable

L∞ distortion, due to the drastic reduction in L1 and L2 distortion. These results demonstrate the power of EAD, particularly in its transferability capabilities. Furthermore, these results indicate the drawbacks of using L∞ as the sole distortion metric, and suggest incorporating L1 or L2 to complement the subspace analysis of adversarial examples for possible defenses such as adversarial training and adversary detection.

The MNIST model released by the Madry Lab is adversarially trained using PGD with ϵ = 0.3. Therefore, it is expected that the existing Madry Defense Model performs poorly against PGD attacks with ϵ > 0.3.

In order to rectify this issue, the Madry Defense Model was trained with and evaluated against a PGD adversary with ϵ tuned from 0.1 to 1.0 under 0.1 increments. As suggested in (Madry et al., 2017), the PGD attack was run for 40 iterations, and to account for varying ϵ, the stepsize was set to 2ϵ/40.

The adversarial retraining results are shown in Table 2. These results suggest that the Madry Defense Model can not be successfully adversarially trained using a PGD adversary with ϵ > 0.3. This is understandable as with such large ϵ, the visual distortion is clearly perceptible.

The targeted attack formulations are discussed below, non-targeted attacks can be implemented in a similar fashion. We denote by x0 and x the original and adversarial examples, respectively, and denote by t the target class to attack.

where f(x,t) is defined as:

By increasing β, one trades off L2 minimization for L1 minimization. When β is set to 0, EAD is equivalent to the C&W L2 attack. By increasing κ, one increases the necessary margin between the predicted probability of the target class and that of the rest. Therefore, increasing κ improves transferability but compromises visual quality.

We implement 9 binary search steps on the regularization parameter c (starting from 0.001) and run I=1000 iterations for each step with the initial learning rate α0=0.01. For finding successful adversarial examples, we use the ADAM optimizer for the C&W attack and implement the projected FISTA algorithm with the square-root decaying learning rate for EAD (Kingma & Ba, 2014; Beck & Teboulle, 2009).

Fast gradient methods (FGM) use the gradient ∇J of the training loss J with respect to x0 for crafting adversarial examples (Goodfellow et al., 2015). For L∞ attacks, which we will consider, x is crafted by

where ϵ specifies the L∞ distortion between x and x0, and sign(∇J) takes the sign of the gradient.

Iterative fast gradient methods (I-FGM) were proposed in (Kurakin et al., 2016), which iteratively use FGM with a finer distortion, followed by an ϵ-ball clipping. We note that this is essentially projected gradient descent on the negative loss function.

In Figure 2, a selected instance (a hand-written ‘1’) of adversarial examples crafted by PGD at ϵ tuned from 0.1 to 1.0 at 0.1 increments is shown. As PGD simply operates on a L∞ distortion budget, as ϵ increases, the amount of noise induced to all of the pixels in the image increases. This noise is visually obvious even at low ϵ such as 0.3, where the adversarial example does not even successfully transfer. At higher ϵ values, PGD appears to change the ‘1’ to a ‘3’. However, under such large visual distortion, it is not entirely clear.

In Table 3, the results of tuning κ for C&W and EAD at the optimal β (0.01) are provided, and are presented with the results for PGD and I-FGM at the lowest ϵ where the highest ASR was yielded, for comparison. Alike the results obtained when using an ensemble of models, it is observed that EAD outperforms C&W at all κ. In the targeted case, at κ = 50, both EAD and C&W outperform PGD and I-FGM with much lower L1 and L2 distortion. Furthermore, at κ ≥ 50, EAD’s adversarial examples unexpectedly have lower average L2 distortion than C&W’s. In the non-targeted case, PGD and I-FGM outperform EAD in terms of ASR. However, as can be inferred by the large L1 and L2 distortion, the perturbations are visually perceptible.