In this paper we consider the Bayes factor approach to general model and variable selection under a nonparametric, Gaussian process framework. Specifically, we establish that under reasonable conditions, the Bayes factor consistently selects the correct model with exponentially fast convergence rate. If the true model does not belong to the postulated model space, then the Bayes factor asymptotically selects the best possible model in the model space with exponentially fast convergence rate. We derive several theoretical applications of the proposed method to various setups like the simple linear regression, reproducing kernel Hilbert space (RKHS) models, autoregressive (AR) models, and combinations of such models. 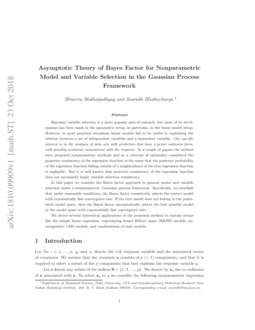 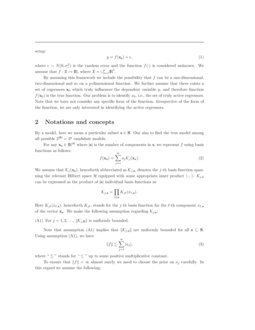 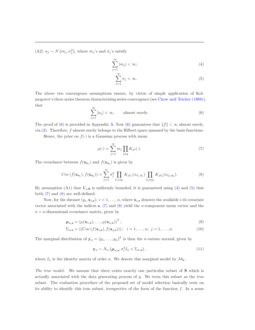 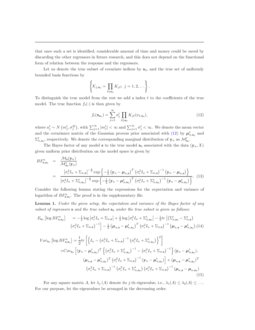 -th response variable and the associated vector of covariates. We assume that the covariate

x consists of p (>1) components, and that it is required to select a subset of the p components that best explains the response variable y.

Let s denote any subset of the indices S={1,2,…,p}. We denote by xs the co-ordinates of x associated with s. To relate xs to y we consider the following nonparametric regression setup:

where ϵ∼N(0,σ2ϵ) is the random error and the function f(⋅) is considered unknown. We assume that f:X↦IR, where X=∪pℓ=1IRℓ.

By assuming this framework we include the possibility that f can be a one-dimensional, two-dimensional and so on a p-dimensional function. We further assume that there exists a set of regressors x0 which truly influences the dependent variable y, and therefore function f(x0) is the true function. Our problem is to identify x0, i.e., the set of truly active regressors. Note that we have not consider any specific form of the function. Irrespective of the form of the function, we are only interested in identifying the active regressors.

By a model, here we mean a particular subset s∈S. Our aim to find the true model among all possible 2|S|=2p candidate models.

For any xs∈IR|s| where |s| is the number of components in s, we represent f using basis functions as follows:

We assume that Kj(xs), henceforth abbreviated as Kj,s, denotes the j-th basis function spanning the relevant Hilbert space H equipped with some appropriate inner product ⟨⋅,⋅⟩. Kj,s can be expressed as the product of |s| individual basis functions as

Here Kjℓ(xℓ,s), henceforth Kjℓ, stands for the j-th basis function for the ℓ-th component xℓ,s of the vector xs. We make the following assumption regarding Kj,s:

where ‘‘≲" stands for ‘‘≤" up to some positive multiplicative constant.

To ensure that ∥f∥<∞ almost surely we need to choose the prior on aj carefully. In this regard we assume the following:

The proof of (6) is provided in Appendix A. Now (6) guarantees that ∥f∥<∞ almost surely, via (3). Therefore, f almost surely belongs to the Hilbert space spanned by the basis functions.

Hence, the prior on f(⋅) is a Gaussian process with mean

Now, for the dataset (yi,xi,s); i=1,…,n, where xi,s denotes the available i-th covariate vector associated with the indices s, (7) and (8) yield the n-component mean vector and the n×n-dimensional covariance matrix, given by

The marginal distribution of yn=(y1,…,yn)T is then the n-variate normal, given by

is the identity matrix of order

n. We denote this marginal model by Ms.

We assume that there exists exactly one particular subset of S which is actually associated with the data generating process of y. We term this subset as the true subset. The evaluation procedure of the proposed set of model selection basically rests on its ability to identify this true subset, irrespective of the form of the function f. In a sense that once such a set is identified, considerable amount of time and money could be saved by discarding the other regressors in future research, and this does not depend on the functional form of relation between the response and the regressors.

Let us denote the true subset of covariate indices by s0, and the true set of uniformly bounded basis functions by

To distinguish the true model from the rest we add a index t to the coefficients of the true model. The true function ft(⋅) is then given by

where atj∼N(mtj,σ2tj), with ∑∞j=1|mtj|<∞ and ∑∞j=1σtj<∞. We denote the mean vector and the covariance matrix of the Gaussian process prior associated with (12) by μtn,s0 and Σtn,s0, respectively. We denote the corresponding marginal distribution of yn as Mts0.

The Bayes factor of any model s to the true model s0 associated with the data (yn,X) given uniform prior distribution on the model space is given by

BFns,s0. The proof is in the supplementary file.

For any square matrix A, let λj(A) denote its j

λ1(A)≤λ2(A)≤…. For our purpose, let the eigenvalues be arranged in the decreasing order.

In this section we modify the assumptions as follows:

To proceed, recall that σ2ϵIn+Σtn,s0=Bs0BTs0, where Bs0 denotes the appropriate lower triangular matrix associated with the Cholesky factorization, and yn−μtn,s0=Bs0zn, with zn∼Nn(0,In). Then

It also follows that,

Let An,s=BTs0(σ2ϵIn+Σn,s)−1Bs0, and let us make the following additional assumptions

To evaluate the first part in the above equation, note that

For the second term of (20) we obtain

Instead of proving Theorem 2 we shall prove a stronger version of the theorem in Section 4 in the context of almost sure convergence.

Combining Theorems 1 and 2 and applying Chebychev’s inequality, we obtain the following theorem:

Now, let us replace assumption (A3) with the slightly stronger assumption

For convenience, we shall work with

where C is a positive constant. The above result follows by repeated application of the inequality (a+b)p≤2p−1(ap+bp), for non-negative a, b, where p≥1.

Let us first obtain the asymptotic order of . Note that

Since Akn is positive definite for any k≥1, it follows from Lemma 2 of the Appendix that for any k≥2,