We present an algorithm for computing asymptotic approximations of roots of polynomials with exp-log function coefficients. The real and imaginary parts of the approximations are given as explicit exp-log expressions. We provide a method for deciding which approximations correspond to real roots. We report on implementation of the algorithm and present empirical data. 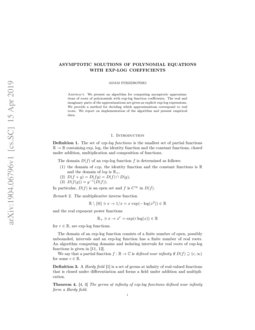 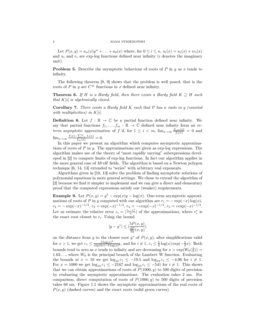 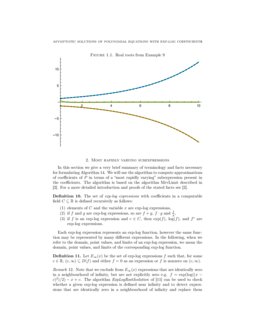 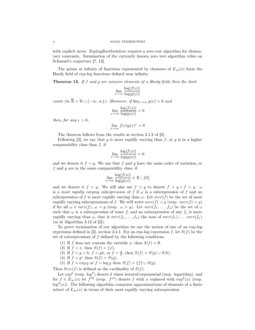 The Lanczos Approximation for the Γ-Function with Complex Coefficients

We examined the properties of the coefficients of the <cit.> approximati...
William Rea, et al. ∙

This paper presents a new approach to the detection of discontinuities i...
Dimitar Ninevski, et al. ∙

In this paper we present a new perspective on error analysis of Legendre...
Haiyong Wang, et al. ∙

The set of exp-log functions is the smallest set of partial functions R→R containing exp, log, the identity function and the constant functions, closed under addition, multiplication and composition of functions.

The domain D(f) of an exp-log function f is determined as follows:

and the real exponent power functions

for r∈R, are exp-log functions.

We say that a partial function f:R→C is defined near infinity if D(f)⊇(c,∞) for some c∈R.

A Hardy field [1] is a set of germs at infinity of real-valued functions that is closed under differentiation and forms a field under addition and multiplication.

[4, 3] The germs at infinity of exp-log functions defined near infinity form a Hardy field.

Describe the asymptotic behaviour of roots of P in y as x tends to infinity.

The following theorem [8, 9] shows that the problem is well posed, that is the roots of P in y are C∞ functions in x defined near infinity.

There exists a Hardy field K such that P has n roots in y (counted with multiplicities) in K[ı].

In this paper we present an algorithm which computes asymptotic approximations of roots of P in y. The approximations are given as exp-log expressions. The algorithm makes use of the theory of “most rapidly varying” subexpressions developed in [2] to compute limits of exp-log functions. In fact our algorithm applies in the more general case of MrvH fields. The algorithm is based on a Newton polygon technique [6, 14, 13] extended to “series” with arbitrary real exponents.

Algorithms given in [10, 13] solve the problem of finding asymptotic solutions of polynomial equations in more general settings. We chose to extend the algorithm of [2] because we find it simpler to implement and we can give a direct and elementary proof that the computed expressions satisfy our (weaker) requirements.

. Let us estimate the relative error

εi=|ri−r∗iri| of the approximations, where r∗i is the exact root closest to ri. Using the bound

In this section we give a very brief summary of terminology and facts necessary for formulating Algorithm 14. We will use the algorithm to compute approximations of coefficients of P in terms of a “most rapidly varying” subexpression present in the coefficients. The algorithm is based on the algorithm MrvLimit described in [2]. For a more detailed introduction and proofs of the stated facts see [2].

The set of exp-log expressions with coefficients in a computable field C⊆R is defined recursively as follows:

The germs at infinity of functions represented by elements of E∞(x) form the Hardy field of exp-log functions defined near infinity.

If f and g are nonzero elements of a Hardy field, then the limit

Following [2], we say that g is more rapidly varying than f, or g is in a higher comparability class than f, if

and we denote it f≺g. We say that f and g have the same order of variation, or f and g are in the same comparability class, if

The algorithm proceeds in a very similar manner to the algorithm MrvLimit described in [2]. First, it finds the set Ω=mrv(a0,…,an). If x∈Ω the algorithm replaces x with exp(x) in a0,…,an and recomputes Ω until x∉Ω. k is the number of replacements performed in this step. Then the algorithm picks ω such that ω or 1/ω belongs to Ω, ω>0, and limx→∞ω=0, and rewrites all elements of Ω in terms of ω. If a↑ki contains a subexpression in the same comparability class as ω, let biωei be the first term of Series(a↑ki,ω) (as in section 3.3.3 of [2]), and let di>0 be the difference between the exponents of ω in the second and in the first term of the series (di=∞ if a↑ki=biωei). If a↑ki does not contain subexpressions in the same comparability class as ω, then bi=a↑ki, ei=0, and di=∞. In both cases mrv(bi)≺ω. Pick 0<d<min0≤i≤ndi. Then ω−(ei+d)(a↑ki−biωei) is either 0 or a power series in ω with positive exponents and coefficients in a lower comparability class than ω, hence limx→∞ω−(ei+d)(a↑ki−biωei)=0. Section 3.4.1 of [2] proves that Size(bi)≤Size(ai), with the strict inequality if a↑ki contains a subexpression in the same comparability class as ω. This shows that the last requirement is satisfied.

To prove correctness of our algorithm we need a polynomial root continuity lemma that does not assume fixed degree of the polynomial. The lemma is very similar to Theorem 1 of [15], except that our version provides explicit bounds.

The other conditions follow directly from the definitions and the properties of the output of Algorithm 14.

Let K be a Hardy field containing germs at infinity of exp-log functions defined near infinity, such that K[ı] is algebraically closed. Let α∈K[ı] be a root of Q. Since |α|∈K, the limit limx→∞log|α|log|ω|=γ exists.

and hence β≺ω. We have

As x tends to infinity, all terms in the last two sums tend to zero, hence

Since β≺ω and μ−ν<0, the cardinality of J must be at least 2. Consider the subset A={(i,ei):i∈I} of R2 with coordinates denoted (x1,x2). Then the line x2=−γx1+μ passes through the points {(i,ei):i∈J} and all the other points of A lie above this line. This means that −γ is the slope of one of the segments that form the lower part of the boundary of the convex hull of A.

Let Γ(x) be the maximum of absolute values of roots of Rγ(x,z) and let Δ(x) be the minimum distance between two distinct roots of Rγ(x,z) (Δ(x)=∞ if all roots of Rγ(x,z) are equal). Put δ(x)=ω(x)(ν−μ)/2 and ϵ(x)=δ(x)1/(2n+2). For sufficiently large x, Rγ(x,z) has a fixed number of distinct roots in z, equal to its number of distinct roots in K[ı]. Γ(x) can be bounded from above by a rational function in absolute values of bi, for i∈J, and, since the coefficients in z of R1(x,z)/g.c.d.(R1(x,z),∂∂zR1(x,z)) are rational functions of bi, Δ(x) can be bounded from below by an expression constructed from bi using rational operations, square roots and absolute value (see e.g. [5], Theorem 5). Since mrv(bi)≺ω, for sufficiently large x, 0<ϵ<min(1,1Γ+1,Δ2). Let s be the degree of Rγ in z. For sufficiently large x,

Let us now consider the case where we have found an exact solution ρj∈EC∞(x) of Rγ(x,z). To simplify the description of the case let us make the following rather technical definition.