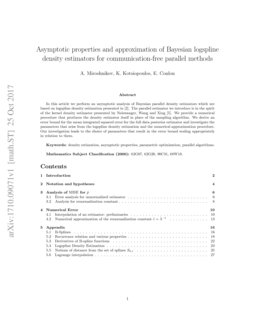 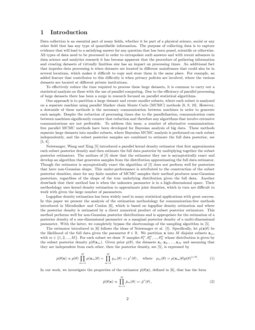 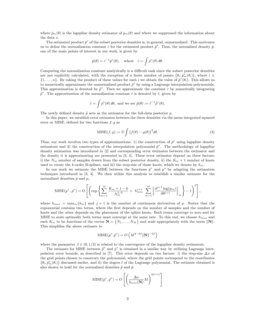 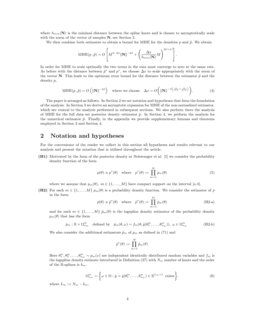 An adaptive procedure for Fourier estimators: illustration to deconvolution and decompounding

The recent advances in data science and big data research have brought challenges in analyzing large data sets in full. These massive data sets may be too large to read into a computer’s memory in full, and data sets may be located on different machines. In addition, there is a lengthy time needed to process these data sets. To alleviate these difficulties, many parallel computing methods have recently been developed. One such approach partitions large data sets into subsets, where each subset is analyzed on a separate machine using parallel Markov chain Monte Carlo (MCMC) methods

[8, 9, 10]; here, communication between machines is required for each MCMC iteration, increasing computation time.

Due to the limitations of methods requiring communication between machines, a number of alternative communication- free parallel MCMC methods have been developed for Bayesian analysis of big data [5, 6]. For these approaches, Bayesian MCMC analysis is performed on each subset independently, and the subset posterior samples are combined to estimate the full data posterior distributions. Neiswanger, Wang and Xing [5] introduced a parallel kernel density estimator that first approximates each subset posterior density and then estimates the full data posterior by multiplying together the subset posterior estimators. The authors of [5] show that the estimator they use is asymptotically exact; they then develop an algorithm that generates samples from the posterior distribution approximating the full data posterior estimator. Though the estimator is asymptotically exact, the algorithm of [5] does not perform well for posteriors that have non-Gaussian shape. This under-performance is attributed to the method of construction of the subset posterior densities; this method produces near-Gaussian posteriors even if the true underlying distribution is non-Gaussian. Another limitation of the method of Neiswanger, Wang and Xing is its use in high-dimensional parameter spaces, since it becomes impractical to carry out this method when the number of model parameters increases.

Miroshnikov and Conlon [6] introduced a new approach for parallel MCMC that addresses the limitations of [5]. Their method performs well for non-Gaussian posterior distributions and only analyzes densities marginally for each parameter, so that the size of the parameter space is not a limitation. The authors use logspline density estimation for each subset posterior, and the subsets are combined by a direct numeric product of the subset posterior estimates. However, note that this technique does not produce joint posterior estimates, as in [5].

The estimator introduced in [6] follows the ideas of Neiswanger et al. [5]. Specifically, let p(x|θ) be the likelihood of the full data given the parameter θ∈R. We partition x into M disjoint subsets xm, with m∈{1,2,...,M}. For each subset we draw N samples θm1,θm2,...,θmN whose distribution is given by the subset posterior density p(θ|xm). Given prior p(θ), the datasets x1,x2,…,xM and assuming that they are independent from each other, then the posterior density, see [5], is expressed by

In our work, we investigate the properties of the estimator ^p(θ|x), defined in [6], that has the form

where ^pm(θ) is the logspline density estimator of pm(θ) and where we suppressed the information about the data x.

Computing the normalization constant analytically is a difficult task since the subset posterior densities are not explicitly calculated, with the exception of a finite number of points (θi,^p∗m(θi)), where i∈{1,…,n}. By taking the product of these values for each i we obtain the value of ^p∗(θi). This allows us to numerically approximate the unnormalized product ^p∗

by using a Lagrange interpolation polynomials. This approximation is denoted by

~p∗. Then we approximate the constant ^c by numerically integrating ~p∗. The approximation of the normalization constant ^c is denoted by ~c, given by

The newly defined density ~p acts as the estimator for the full-data posterior p.

In this paper, we establish error estimates between the three densities via the mean integrated squared error or MISE, defined for two functions f,g as

Thus, our work involves two types of approximations: 1) the construction of ^p∗ using logspline density estimators and 2) the construction of the interpolation polynomial ~p∗. The methodology of logspline density estimation was introduced in [2] and corresponding error estimates between the estimator and the density it is approximating are presented in [3, 4]. These error estimates depend on three factors: i) the Nm number of samples drawn from the subset posterior density, ii) the Km+1 number of knots used to create the k-order B-splines, and iii) the step-size of those knots, which we denote by hm.

In our work we estimate the MISE between the functions ^p∗ and p∗ by adapting the estimation techniques introduced in [3, 4]. We then utilize this analysis to establish a similar estimate for the normalized densities ^p and p,

where hmax=maxm{hm} and j+1 is the number of continuous derivatives of p. Notice that the exponential contains two terms, where the first depends on the number of samples and the number of knots and the other depends on the placement of the spline knots. Both terms converge to zero and for MISE to scale optimally both terms must converge at the same rate. To this end, we choose hmax and each Km

to be functions of the vector

N={N1,…,NM} and scale appropriately with the norm ∥N∥. This simplifies the above estimate to

where the parameter β∈(0,1/2) is related to the convergence of the logspline density estimators.

The estimate for MISE between ~p∗ and ^p∗ is obtained in a similar way by utilizing Lagrange interpolation error bounds, as described in [7]. This error depends on two factors: i) the step-size Δx of the grid points chosen to construct the polynomial, where the grid points correspond to the coordinates (θi,^p∗m(θi)) discussed earlier, and ii) the degree l of the Lagrange polynomial. The estimate obtained is also shown to hold for the normalized densities ~p and ^p.

where hmin(N) is the minimal distance between the spline knots and is chosen to asymptotically scale with the norm of the vector of samples N, see Section 2.

We then combine both estimates to obtain a bound for MISE for the densities p and ~p. We obtain

In order for MISE to scale optimally the two terms in the sum must converge to zero at the same rate. As before with the distance between ^p∗ and p∗, we choose Δx to scale appropriately with the norm of the vector N. This leads to the optimum error bound for the distance between the estimator ~p and the density p,

The paper is arranged as follows. In Section 2 we set notation and hypotheses that form the foundation of the analysis. In Section 3 we derive an asymptotic expansion for MISE of the non-normalized estimator, which are central to the analysis performed in subsequent sections. We also perform there the analysis of MISE for the full data set posterior density estimator ^p. In Section 4, we perform the analysis for the numerical estimator ~p. In Section 5 we showcase our simulated experiments and discuss the results. Finally, in the appendix we provide supplementary lemmas and theorems employed in Section 3 and Section 4.

For the convenience of the reader we collect in this section all hypotheses and results relevant to our analysis and present the notation that is utilized throughout the article.

where we use the notation N=(Nm)Nm=1.

We assume that the probability densities functions p1,…,pM satisfy the following hypotheses:

3 Analysis of Mise for ^p

Suppose we are given a data set x and it is partitioned into M≥1 disjoint subsets xm, m∈{1,…,M}. We are interested in the subset posterior densities pm(θ)=p(θ|xm). For each such density we apply the analysis from before. Let ^pm and ¯pm, m∈{1,…,M} be the corresponding logspline estimators as defined in (70) and (71) respectively. By definition of ^pm, that is equal to the logspline density estimate on Ωmnm⊂Ω, where Ωmnm is the set defined in (69) for ^pm.

which is the set where the maximizer for the log-likelihood exists given each data subset and thus all logspline density estimators ^pm exist.

Suppose the conditions in (H3) and (H4) hold. Given the previous definition, we have that

By Theorem 53 we have that

and the result follows by taking n to infinity. ∎

Since the probability of the set where the estimators ^pm exist for all m∈{1,…,M} tends to 1, it makes sense to do our analysis for a conditional MISE on the set Ω––M,N(n). Considering the practical aspect, we will never encounter the set where the maximizer of the log-likelihood doesn’t exist.

At this point, let’s state a bound for |^p∗(θ;ω)−p∗(θ)| which will be essential in our analysis of MISE.

Suppose the hypotheses (H1)-(H7) hold and that we are restricted to the sample subspace Ω––M,N(n). We then have the following:

This leads us directly to the theorem for the conditional MISE of the unnormalized densities p∗ and ^p∗.

(Conditional MISE for unnormalized p∗,^p∗ and M≥1) Assume the conditions (H1)-(H7) hold. Given M≥1 we have

In addition, if (H8) holds, then MISE scales optimally in regards to the number of samples,

By definition of the conditional MISE and Lemma 3, we have

It’s interesting to note how the number of knots, their placement and the number of samples all play a role in the above bound. If we want to be accurate, all of the parameters Lm(n),Nm(n) and ¯hmax must be chosen appropriately.

We first state the following lemma for λ and ^λ(ω).

By definition of λ and ^λ(ω), we have

where the inequality is justified by Lemma 3(c). Dividing by λ the result then follows by hypothesis (H8). ∎

Knowing now how ^λ(ω) scales we can start analyzing \rm MISE(p,^p) on the sample subspace. However, to make the analysis slightly easier we introduce a new functional, called ¯¯¯¯¯¯¯¯¯¯¯¯¯¯¯¯¯¯¯¯¯¯\rm MISE. This new functional is asymptotically equivalent to MISE as we will show, thus providing us with the means to view how MISE scales without having to directly analyze it.

Suppose M≥1 and hypotheses (H1)-(H2) hold. Given the sample subspace Ω––M,N(n) we define the functional

and thus by Lemma 6

which then implies the result. ∎

We conclude our analysis with the next theorem, which states how MISE scales for the renormalized estimators.

So far we have estimated the error that arises between the unknown density p and the full-data estimator ^p. However, in practice it is difficult to evaluate the renormalization constant

defined in (17). The difficulty is due to the process of generating MCMC samples and thus ^p∗ is not explicitly known. In order to circumvent this issue, our idea is to approximate the integral above numerically. To accomplish this, we interpolate ^p∗ using Lagrange polynomials. This procedure leads to the construction of an interpolant estimator ~p∗ which we then integrate numerically. We then normalize ~p∗ and use that as a density estimator for p. Unfortunately, to estimate the error by considering that kind of approximation given an arbitrary grid of points for Lagrange polynomials, independent of the set of knots (ti) for B-splines gives a stringent condition on the smoothness of B-splines we incorporate. It turns out that we have to utilize B-splines of order at least k=4. For this reason we consider using Lagrange polynomials of order l+1 which satisfy l<k−2.

4.1 Interpolation of an estimator: preliminaries

We remind the reader the model we deal with throughout our work. We recall that the (marginal) posterior of the parameter θ∈R (which is a component of a multidimensional parameter θ∈Rd) given the data