In this paper, we address the problem of parameter estimation of a 2-D chirp model under the assumption that the errors are stationary. We extend the 2-D periodogram method for the sinusoidal model, to find initial values to use in any iterative procedure to compute the least squares estimators (LSEs) of the unknown parameters, to the 2-D chirp model. Next we propose an estimator, known as the approximate least squares estimator (ALSE), that is obtained by maximising a periodogram-type function and is observed to be asymptotically equivalent to the LSE. Moreover the asymptotic properties of these estimators are obtained under slightly mild conditions than those required for the LSEs. For the multiple component 2-D chirp model, we propose a sequential method of estimation of the ALSEs, that significantly reduces the computational difficulty involved in reckoning the LSEs and the ALSEs. We perform some simulation studies to see how the proposed method works and a data set has been analysed for illustrative purposes. 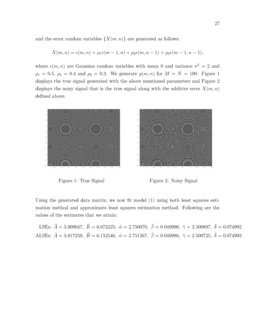 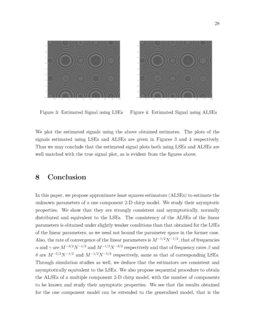 Here y(m,n)s are the signal observations, A0, B0 are real valued, non-zero amplitudes and {α0,γ0} and {β0,δ0} are the frequencies and the frequency rates

{X(m,n)} is a sequence of stationary errors. The explicit assumptions on the error structure are provided in section 2.

The above model has been considered in many areas of image processing, particularly in modeling gray images. Several estimation techniques for the unknown parameters of this model have been considered by different authors, for instance, Friedlander and Francos [7], Francos and Friedlander [5], [6], Lahiri [10], [11] and the references cited therein.

Our goal is to estimate the unknown parameters of the above model, primarily the non-linear parameters, the frequencies α0, γ0 and the frequency rates β0, δ0, under certain suitable assumptions. One of the straightforward and efficient ways to do so is to use the least squares estimation method. But since the least squares surface is highly non-linear and iterative methods must be employed for their computation, for these methods to work, we need good starting points for the unknown parameters.

One of the fundamental models in statistical signal processing literature, among the 2-D models, is the 2-D sinusoidal model. This model has different applications in many fields such as biomedical spectral analysis, geophysical perception etc. For references, see Barbieri and Barone [2], Cabrera and Bose [3], Hua [8] , Zhang and Mandrekar [17], Prasad et al, [13], Nandi et al, [12] and Kundu and Nandi [9].

A 2-D sinusoidal model has the following mathematical expression:

For this model as well, the least squares surface is highly non-linear and thus we need good initial values, for any iterative procedure to work. One of the most prevalent methods to find the initial guesses for the 2-D sinusoidal model are the periodogram estimators. These are obtained by maximizing a 2-D periodogram function, which is defined as follows:

This periodogram function is maximized over 2-D Fourier frequencies, that is, at (πkM,πjN), for k=1,⋯,M−1, and j=1,⋯,N−1. The estimators that are obtained by maximising the above periodogram function with respect to λ and μ simultaneously over the continuous space (0,π)×(0,π), are known as the approximate least squares estimators (ALSEs). Kundu and Nandi, [9] proved that the ALSEs are consistent and asymptotically equivalent to the least squares estimators (LSEs).

Analogously, we define a periodogram-type function for the 2-D chirp model defined in equation (1), as follows:

Next we propose to estimate the unknown parameters of model (1) by approximate least squares estimation method. In this method, we maximize the periodogram-like function I(α,β,γ,δ) defined above, with respect to α, β, γ and δ simultaneously, over (0,π)×(0,π)×(0,π)×(0,π). The details on the methodology to obtain the ALSEs are further explained in section 3

. We prove that these estimators are strongly consistent and asymptotically normally distributed under the assumptions, that are slightly mild than those required for the LSEs. Also, the convergence rates of the ALSEs are same as those of the LSEs.

The rest of the paper is organized as follows. In the next section we state the model assumptions, some notations and some preliminary results required. In section 3, we give a brief description of the methodology. In section 4, we study the asymptotic properties of one component 2-D chirp model and in section 5, we propose a sequential method to obtain the LSEs and ALSEs for the multicomponent 2-D chirp model and study their asymptotic properties. Numerical experiments and a simulated data analysis are illustrated in sections 6 and 7. In section 8, we conclude the paper. All the proofs are provided in the appendices.

Assumption 1. The error X(m,n) is stationary with the following form:

and finite fourth moment, and

a(j,k)s are real constants such that

We will use the following notation: θ=(A,B,α,β,γ,δ)

θ0=(A0,B0,α0,β0,γ0,δ0), the true parameter vector, Θ=(−∞,∞)×(−∞,∞)×(0,π)×(0,π)×(0,π)×(0,π), the parameter space. Also, ϑ=(α,β,γ,δ), a vector of the non-linear parameters. Assumption 2. The true parameter vector θ0 is an interior point of Θ. Note that the assumptions required to prove strong consistency of the LSEs of the unknown parameters in this case are slightly different from those required to prove the consistency of ALSEs. For the LSEs the parametric space for the linear parameters has to be bounded, though here we do not require that bound. For details on the assumptions for the consistency of the LSEs, see Lahiri [10]. We need the following results to proceed further:

Consider the periodogram-like function defined in (2). In matrix notation, it can be written as:

In matrix notation, equation (1), can be written as:

We know that to find the LSEs, we minimise the following error sum of squares:

with respect to θ. If we fix ϑ, then the estimates of the linear parameters can be obtained by separable regression technique of Richards [15] by minimizing Q(θ) with respect to A and B. Thus the estimate of ϕ0=[A0B0]T is given by:

Using Lemma 5, we have the following relationship between the function Q(θ) and the periodogram-like function I(ϑ):

In this section, we study the asymptotic properties of the proposed estimators, the ALSEs of model (1). The following theorem states the result on the consistency property of the ALSEs.

In the following theorem, we state the result obtained on the asymptotic distribution of the proposed estimators.

In this section, we consider a 2-D chirp model with multiple components, mathematically expressed in the following form:

Here y(m,n) is the observed data vector, A0ks, B0ks are the amplitudes, α0ks, γ0ks are the frequencies and the β0ks, δ0ks are the frequency rates. The random variables sequence {X(m,n)} is a stationary error sequence. In practice, the number of components, p is unknown and its estimation is an important and still an open problem. For recent references on this model, see Zhang et al. [18] and Lahiri [10].

Here it is assumed that p is known and our main purpose is to estimate the unknown parameters of this model, primarily the non-linear parameters. Finding the ALSEs for the above model is computationally challenging, especially when the number of components, p is large. Even when p=2, we need to solve a 12-D optimisation problem to obtain the ALSEs. Thus, we propose a sequential procedure to find these estimates. This method reduces the complexity of computation without compromising on the efficiency of the estimators. We prove that the ALSEs obtained by the proposed sequential procedure are strongly consistent and have the same rates of convergence as the LSEs.

In the following subsection, we provide the algorithm to obtain the sequential ALSEs of the unknown parameters of the p component 2-D chirp signal. Let us denote ϑk=(αk,βk,γk,δk).

5.1 Algorithm to find the ALSEs:

Further assumptions required to study the consistency property and derive the asymptotic distribution of the proposed estimators, are stated as follows: Assumption 3. θ0k is an interior point of Θ, for all k=1,…,p and the frequencies α0ks, γ0ks and the frequency rates β0ks, δ0ks are such that (α0i,β0i,γ0i,δ0i)≠(α0j,β0j,γ0j,δ0j) ∀i≠j. Assumption 4. A0ks and B0ks satisfy the following relationship:

In the following theorems, we state the results we obtained on the consistency of the proposed estimators.

The result obtained in the above theorem can be extended upto the p-th step. Thus for any k ⩽ p, the ALSEs obtained at the k-th step are strongly consistent.

If the assumptions, 1, 3 and 4 are satisfied, then

The above result holds true for all 1⩽k⩽p and is stated in the following theorem.

If the assumptions, 1, 3 and 4 are satisfied, then

This proof can be obtained by proceeding exactly in the same manner as in the proof of Theorem 6. ∎

6.1 Simulation results for the one component model

We perform numerical simulations on model (1) with the following parameters:

The following error structures are used to generate the data:

Here ϵ(m,n) ∼ N(0,σ2). For simulations we consider different values of σ and different values of M and N as can be seen in the tables. We estimate the parameters both by least squares estimation method and approximate least squares estimation method. These estimates are obtained 1000 times each and averages, biases and MSEs are reported. We also compute the asymptotic variances to compare with the corresponding MSEs. From the tables above, it is observed that as the error variance increases, the MSEs also increase for both the LSEs and the ALSEs. As the sample size increases, one can see that the estimates become closer to the corresponding true values, that is, the biases become small. Also, the MSEs decrease as the sample size, M and N increase, and the order of the MSEs of both the estimators is almost equivalent to the order of the asymptotic variances. Hence, one may conclude that they are well matched. The MSEs of the ALSEs get close to those of LSEs as M and N increase and hence to the theoretical asymptotic variances of the LSEs, showing that they are asymptotically equivalent.

6.2 Simulation results for the multiple component model with p=2

Next we conduct numerical simulations on model (5) with p=2 and the following parameters:

The error structures used to generate the data are same as that used for the one component model, see equations, (8) and (9). For simulations we consider different values of σ and different values of M and N, again same as that for the one component model. We estimate the parameters both by least squares estimation method and approximate least squares estimation method. These estimates are obtained 1000 times each and averages, biases, MSEs and asymptotic variances are computed. The results are reported in the following tables. From the tables, it can be seen that the estimates, both the ALSEs and the LSEs are quite close to their true values. It is observed that the estimates of the second component are better than those of the first component, in the sense that their biases and MSEs are smaller and the MSEs are better matched with the corresponding asymptotic variances. For both the estimators, as the sample size increases, the MSEs and the biases of the estimates of both components, decrease thus showing consistency.