Asymptotic expansion for the Hartman-Watson distribution

The Hartman-Watson distribution with density f_r(t) is a probability distribution defined on t ≥ 0 which appears in several problems of applied probability. The density of this distribution is expressed in terms of an integral θ(r,t) which is difficult to evaluate numerically for small t→ 0. Using saddle point methods, we obtain the first two terms of the t→ 0 expansion of θ(ρ/t,t) at fixed ρ >0. As an application we derive, under an uniformity assumption in ρ, the leading asymptotics of the density of the time average of the geometric Brownian motion as t→ 0. This has the form P(1/t∫_0^t e^2(B_s+μ s) ds ∈ da) = (2π t)^-1/2 g(a,μ) e^-1/t J(a) (1 + O(t)), with an exponent J(a) which reproduces the known result obtained previously using Large Deviations theory. 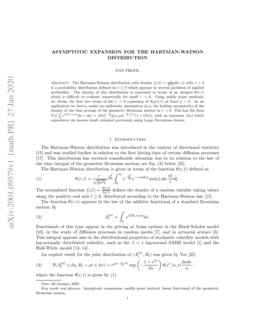 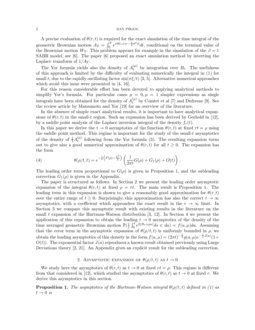 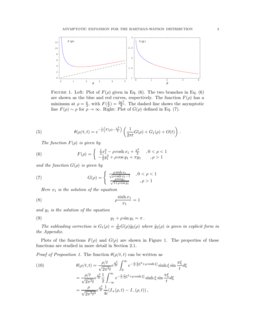 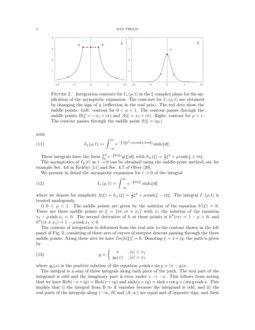 An examination of the spillage distribution

Asymptotic expansion of a variation with anticipative weights

Average values of functionals and concentration without measure

Although there doesn't exist the Lebesgue measure in the ball M of C[0,1...
Cheng-shi Liu, et al. ∙

The Hartman-Watson distribution was introduced in the context of directional statistics [15] and was studied further in relation to the first hitting time of certain diffusion processes [17]. This distribution has received considerable attention due to its relation to the law of the time integral of the geometric Brownian motion, see Eq. (3) below [25].

The Hartman-Watson distribution is given in terms of the function θ(r,t) defined as

t≥0, distributed according to the Hartman-Watson law [15].

The function θ(r,t) appears in the law of the additive functional of a standard Brownian motion Bt

Functionals of this type appear in the pricing of Asian options in the Black-Scholes model [10], in the study of diffusion processes in random media [7], and in actuarial science [5]

. This integral appears also in the distributional properties of stochastic volatility models with log-normally distributed volatility, such as the

An explicit result for the joint distribution of

The Yor formula yields also the density of A(μ)t by integration over Bt. The usefulness of this approach is limited by the difficulty of evaluating numerically the integral in (1) for small t, due to the rapidly oscillating factor sin(πξ/t) [3, 5]. Alternative numerical approaches which avoid this issue were presented in [4, 16].

For this reason considerable effort has been devoted to applying analytical methods to simplify Yor’s formula. For particular cases μ=0,μ=1 simpler expressions as single integrals have been obtained for the density of A(μ)t by Comtet et al [7] and Dufresne [9]. See the review article by Matsumoto and Yor [19] for an overview of the literature.

In the absence of simple exact analytical results, it is important to have analytical expansions of θ(r,t) in the small-t region. Such an expansion has been derived by Gerhold in [12], by a saddle point analysis of the Laplace inversion integral of the density fr(t).

In this paper we derive the t→0 asymptotics of the function θ(r,t) at fixed rt=ρ using the saddle point method. This regime is important for the study of the small-t asymptotics of the density of 1tA(μ)t following from the Yor formula (3). The resulting expansion turns out to give also a good numerical approximation of θ(r,t) for all t≥0. The expansion has the form

The paper is structured as follows. In Section 2 we present the leading order asymptotic expansion of the integral θ(r,t) at fixed ρ=rt. The main result is Proposition 1. The leading term in this expansion is shown to give a reasonably good approximation for θ(r,t) over the entire range of t≥0. Surprisingly, this approximation has also the correct t→∞ asymptotics, with a coefficient which approaches the exact result in the r→∞ limit. In Section 3 we compare this asymptotic result with existing results in the literature on the small t expansion of the Hartman-Watson distribution [3, 12]. In Section 4 we present the application of this expansion to obtain the leading t→0 asymptotics of the density of the time averaged geometric Brownian motion P(1t∫t0e2(Bs+μs)ds∈da)=f(a,μ)da. Assuming that the error term in the asymptotic expansion of θ(ρ/t,t) is uniformly bounded in ρ, we obtain the leading asymptotics of this density in the form f(a,μ)=(2πt)−12g(a,μ)e−1tJ(a)(1+O(t)). The exponential factor J(a) reproduces a known result obtained previously using Large Deviations theory [2, 21]. An Appendix gives an explicit result for the subleading correction.

The asymptotics of the Hartman-Watson integral θ(ρ/t,t) defined in (1) as t→0 is

The function F(ρ) is given by

and the function G(ρ) is given by

Here x1 is the solution of the equation

and y1 is the solution of the equation

Plots of the functions F(ρ) and G(ρ) are shown in Figure 1. The properties of these functions are studied in more detail in Section 2.1.

The function θ(ρ/t,t) can be written as

where we denote for simplicity h(ξ)=h+(ξ)=12ξ2+ρcoshξ−iπξ. The integral I−(ρ,t) is treated analogously.

The contour of integration is deformed from the real axis to the contour shown in the left panel of Fig. 2, consisting of three arcs of curves of steepest descent passing through the three saddle points. Along these arcs we have Im[h(ξ)]=0. Denoting ξ=x+iy, the path is given by

where y0(x) is the positive solution of the equation ρsinhxsiny=(π−y)x.

The integral is a sum of three integrals along each piece of the path. The real part of the integrand is odd and the imaginary part is even under

x→−x. This follows from noting that we have Reh(−x+iy)=Reh(x+iy) and sinh(x+iy)=sinhxcosy+isinycoshx. This implies that i) the integral from B to A vanishes because the integrand is odd, and ii) the real parts of the integrals along (−∞,B] and [A,∞) are equal and of opposite sign, and their imaginary parts are equal. This gives

Thus it is sufficient to evaluate only ImI[A,∞). This integral is written as

where we defined τ=h(ξ)−h(A). This is expanded around ξ=A as

By Watson’s lemma [20], the resulting expansion can be integrated term by term. The leading asymptotic contribution to I[A,∞)(ρ,t) is

The integral is ∫∞0e−1tτdτ√τ=√πt. Substituting into (14) reproduces the quoted result by identifying h(A)=F(ρ). Since g1,g3,⋯ are real, the O(τ0) term in (20) does not contribute to ImI[A,∞), and the leading correction comes from the O(τ1/2) term. This is given in explicit form in the Appendix.

ii) ρ>1. There are several saddle points along the imaginary axis. We are interested in the saddle point at ξ=iy1 with 0<y1≤π the solution of (9). At this point the second derivative of h is h′′(iy1)=1+ρcoshy1>0.

Deform the ξ:(−∞,+∞) integration contour into the curve in the right panel of Fig.  2. This is a steepest descent curve Im(h(ξ))=0, given by y0(x), the positive solution of the equation ρsinhxsiny=(π−y)x. The contour passes through the saddle point S at ξ=iy1.

The integral I+(ρ,t)=∫S−∞+∫+∞S. is the sum of the two integrals on the two halves of the contour. As in the previous case, the sum is imaginary since along the contour h(ξ) is real, and Re[h(ξ)] is even in x. Noting that sinh(x+iy)=sinhxcosy+isinycoshx, the first term is odd in x and cancels out, and only the second (imaginary) term gives a contribution. We have a result similar to (14)

As before, it is sufficient to evaluate only the [S,∞) integral, which is

where we introduced τ=h(ξ)−h(S)≥0. This diference is expanded around ξ=S as

The integrand is also expanded in ξ−S as

Again similar to the previous case, g0,g2,⋯ are imaginary, while g1,g3,⋯ are real, such that only the even order terms contribute.

By Watson’s lemma [20] we can exchange expansion and integration, and we get the leading asymptotic term

which is evaluated exactly as ∫∞0e−1tτdτ√τ=√πt and gives G(ρ). The subleading term is given in explicit form in the Appendix.

The derivative F′(ρ) can be computed exactly

We can obtain also the asymptotics of F(ρ) for very small and very large arguments.

i) As ρ→0 the function F(ρ) has the asymptotics

ii) As ρ→∞ the function F(ρ) has the asymptotics

iii) Around ρ=1, the function F(ρ) has the expansion

Taking the logs of both sides gives

This can be iterated starting with the zero-th approximation x(0)1=L, which gives (33).

Substituting (33) into this expression gives the quoted result.

ii) As ρ→∞, the solution of the equation (9) approaches y1→0. This equation is approximated as

which is inverted as

Substituting into F(ρ)=−12y21+ρcosy1+πy1 gives the result quoted above.

We give next the asymptotics of G(ρ).

i) The asymptotic expansion of x1→∞ for ρ→0 was already obtained in (33). Substitute this into

which follows from (7) by eliminating ρ using (8). Expanding the result gives the result quoted.

Using here the expansion of y1 from (38) gives the result quoted.

iii) The proof is similar to that of point (iii) in Proposition 2. ∎

We would like to compare this approximation with the leading asymptotic expansion of [12], which is obtained by taking the limit t→0 at fixed r. This is given by Theorem 1 in [12]

where u0(t) is the solution of the equation

Table 1 shows the numerical evaluation of ^θ(r,t) for r=0.5 and several values of t, comparing also with the small t expansion θG(r,t) in Eq. (45). They agree well for sufficiently small t but start to diverge for larger t. In the last column of Table 1 we show also the result of a direct numerical evaluation of θ(r,t) by numerical integration in Mathematica.

Figure 3 compares the approximation ^θ(r,t) (black curves) against θG(r,t) (blue curves) and direct numerical integration (red curves). We note the same pattern of good agreement between ^θ(r,t) and θG(r,t) at small t, and increasing discrepancy for larger t, which explodes to infinity for sufficiently large t. The reason for this explosive behavior is the fact that the denominator in Eq. (45) approaches zero as t approaches a certain maximum value. For t larger than this value the denominator becomes negative and the approximation ceases to exist.

We show in Figure 4 plots of ^θ(r,t) vs t at r=0.5,1.0,1.5. The vertical scale of the plot is chosen as in Figure 1 (left) of Bernhart and Mai [4], which shows the plots of θ(r,t) for the same parameters, obtained using a precise numerical inversion of the Laplace transform of θ(r,t). The shapes of the curves are very similar with those shown in [4].

We study in this Section the asymptotics of the approximation ^θ(r,t) defined in (44) for t→0 and t→∞, and compare with the exact asymptotics of θ(r,t) in these limits obtained by Barrieu et al [3] and Gerhold [12].

The t→0 expansion of ^θ(r,t) can be obtained using the ρ→0 asymptotics of F(ρ),G(ρ) in points (i) of the Propositions 2 and 3, respectively. This gives

The exponential factor agrees with the asymptotics of the exact result. Also the leading dependence of the multiplying factor reproduces the improved expansion following from [12].

The t dependence has the same form as the exact asymptotics (50).

The leading term in this expansion matches precisely the coefficient obtained from ^θ(r,t). We conclude that the right tail asymptotics of ^θ(r,t) approaches the same form as the exact asymptotics in the limit r→∞.

We examine here the error of the approximation for θ(r,t) obtained by keeping only the leading asymptotic term in Proposition 1. Define the normalized error

Using the subleading correction to the asymptotic expansion of Proposition 1, this error term has the leading term

Figure 5 shows the error term ε(ρ,t) obtained by numerical evaluation of θ(ρ/t,t), for several values of t≤1. The results are in good qualitative agreement with the asymptotic result (54), which they approach as t decreases. Similar results are obtained for ρ>1; we highlighted the region shown as the error is maximal in this region. Numerical stability issues in the evaluation of θ(r,t) limited these tests to t≥0.2. The error shows a decreasing trend as t decreases. Assuming that this trend continues all the way down to t→0, these numerical tests suggest an error bound uniform in ρ of the form

for all t sufficiently small.

4. Application: The asymptotic distribution of 1tA(μ)t

As an application of the result of Proposition 1, we give here the leading t→0 asymptotics of the distribution of the time average of the gBM 1tA(μ)t.

The distribution of 1tA(μ)t can be obtained from Yor’s formula (3) by integration over x. Introducing a new variable u=at this is expressed as the integral