This paper investigates asymptotic behaviors of gradient descent algorithms (particularly accelerated gradient descent and stochastic gradient descent) in the context of stochastic optimization arose in statistics and machine learning where objective functions are estimated from available data. We show that these algorithms can be modeled by continuous-time ordinary or stochastic differential equations, and their asymptotic dynamic evolutions and distributions are governed by some linear ordinary or stochastic differential equations, as the data size goes to infinity. We illustrate that our study can provide a novel unified framework for a joint computational and statistical asymptotic analysis on dynamic behaviors of these algorithms with the time (or the number of iterations in the algorithms) and large sample behaviors of the statistical decision rules (like estimators and classifiers) that the algorithms are applied to compute, where the statistical decision rules are the limits of the random sequences generated from these iterative algorithms as the number of iterations goes to infinity. 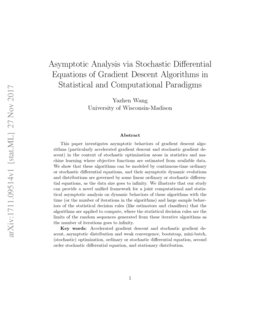 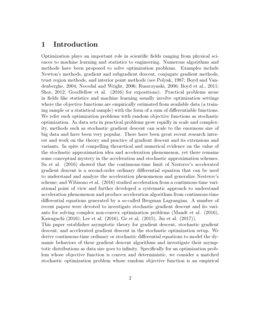 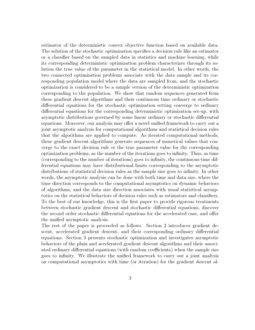 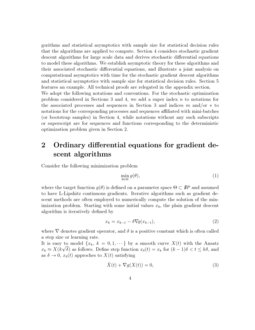 In this paper, we study the statistical limits in terms of Sobolev norms...
Yiping Lu, et al. ∙

Stochastic optimization on matrices and a graphon McKean-Vlasov limit

Pólya urns are urns where at each unit of time a ball is drawn and repla...
Cyril Banderier, et al. ∙

Optimization plays an important role in scientific fields ranging from physical sciences to machine learning and statistics to engineering. Numerous algorithms and methods have been proposed to solve optimization problems. Examples include Newton’s methods, gradient and subgradient descent, conjugate gradient methods, trust region methods, and interior point methods (see Polyak, 1987; Boyd and Vandenberghe, 2004; Nocedal and Wright, 2006; Ruszczynski, 2006; Boyd et al., 2011; Shor, 2012; Goodfellow et al. (2016) for expositions). Practical problems arose in fields like statistics and machine learning usually involve optimization settings where the objective functions are empirically estimated from available data (a training sample or a statistical sample) with the form of a sum of differentiable functions. We refer such optimization problems with random objective functions as stochastic optimization. As data sets in practical problems grow rapidly in scale and complexity, methods such as stochastic gradient descent can scale to the enormous size of big data and have been very popular. There have been great recent research interest and work on the theory and practice of gradient descent and its extensions and variants. For example, a number of recent papers were devoted to investigate stochastic gradient descent and its variants for solving complex optimization problems (Chen et al. (2016), Li et al. (2017), Mandt et al. (2016), Kawaguchi (2016), Keskar et al. (2017), Lee et al. (2016), Ge et al. (2015), Jin et al. (2017)). Su et al. (2016) showed that the continuous-time limit of Nesterov’s accelerated gradient descent is a second-order ordinary differential equation that can be used to understand and analyze the acceleration phenomenon and generalize Nesterov’s scheme; and Wibisono et al. (2016) studied acceleration from a continuous-time variational point of view and further developed a systematic approach to understand acceleration phenomenon and produce acceleration algorithms from continuous-time differential equations generated by a so-called Bregman Lagrangian. In spite of compelling theoretical and numerical evidence on the value of the stochastic approximation idea and acceleration phenomenon, yet there remains some conceptual mystery in the acceleration and stochastic approximation schemes.

where the target function g(θ) is defined on a parameter space Θ⊂IRp and assumed to have L-Lipshitz continuous gradients. Iterative algorithms such as gradient descent methods are often employed to numerically compute the solution of the minimization problem. Starting with some initial values x0, the plain gradient descent algorithm is iteratively defined by

where ∇ denotes gradient operator, and δ is a positive constant which is often called a step size or learning rate.

where ˙X(t) denotes the derivative of X(t), and initial value X(0)=x0.

where δ is a positive constant. Using (4) we derive a recursive relationship between consecutive increments

where ¨X(t) denotes the second derivative of X(t). Substituting above results into equation (5) we obtain

Note that X(t) is free of δ. As δ→0, the equation becomes

Q. Consider an objective function ℓ(θ;u) and its corresponding expectation E[ℓ(θ;U)]=g(θ). For example, in a statistical decision problem, we may take U to be a decision rule, ℓ(θ;u)

a loss function, and

g(θ)=E[ℓ(θ;U)] its corresponding risk; in M-estimation, we may treat U as a sample observation and ℓ(θ,u) a ρ-function; in nonparametric function estimation and machine learning, we may choose U an observation and ℓ(θ;u) equal to a loss function plus some penalty. For these problems we need to consider the corresponding minimization problem (1) for characterizing the true parameter value, but practically, because g(θ) is usually unavailable, we have to employ its empirical version and consider a stochastic optimization problem, described as follows:

, the law of large number implies that

Ln(θ;Un) eventually converges to g(θ) in probability, and thus the solution of (7) approaches that of (1).

Applying the plain gradient descent scheme to the minimization problem (7) with initial value xn0, we obtain the following iterative algorithm to compute the solution of (7),

where δ>0 is a step size or learning rate, and Ln is the objective function in minimization problem (7).

Following the continuous curve approximation described in Section 2 we define step function xnδ(t)=xnk for (k−1)δ<t≤kδ, and for each n, as δ→0, xnδ(t) approaches a smooth curve Xn(t), t≥0, given by

As Un and Xn(t) are random, and our main interest is to study the distributional behaviors of the solution and algorithm, we may define a solution of equation (9) in a weak sense that there exist a process Xn†(t)

and a random vector

is not required to be defined on a fixed probability space with given random variables, instead we define

Xn†(t) on some probability space with some associated random variables U†i whose distributions are given by Q. The weak solution definition, which shares the same spirit as that for stochastic differential equations (see Ikeda and Watanabe (1981) and more in Section 4), will be very handy in facilitating our asymptotic analysis in this paper. For simplicity we drop index † and ‘weak’ when there is no confusion.

Nesterov’s accelerated gradient descent scheme can be used to solve the minimization problem (7). Starting with initial values xn0 and yn0=xn0, we obtain the following iterative algorithm to compute the solution of (7),

Using the continuous curve approach described in Section 2 we can define step function xnδ(t)=xk for (k−1)√δ<t≤k√δ, and for every n, as δ→0, we approximate xnδ(t) by a smooth curve Xn(t), t≥0, governed by

Again we define a solution Xn(t) of equation (11) in a weak sense that there exist a process Xn(t) and random vector Un on some probability space so that the distribution of Un is specified by Q, and Xn(t) is a solution of equation (11).

To make equations (9) and (11) and their solutions to be well defined and study their asymptotics we need to impose the following conditions.

Under conditions A0-A4, as n→∞, Vn(t) weakly converges to V(t)=Π(t)Z on C([0,T]), where Z∼Np(0,Ip), and matrix Π(t) is the unique solution of the following linear differential equation

for the plain gradient descent case, and

for the accelerated gradient descent case, where X(t) in (12) and (13) are the solutions of ordinary differential equations (3) and (6), respectively.

As we discussed early in Section 3, as n→∞, Ln(θ;Un)=1n∑ni=1ℓ(θ;Ui) converges to g(θ) in probability, and the solutions of the minimization problems (1) and (7) should be very close to each other. We may heuristically illustrate the derivation of Theorem 3.1

as follows. Central limit theorem may lead us to see that as

n→∞, ∇Ln(θ;Un) is asymptotically distributed as ∇g(θ)+n−1/2\boldmathσ(θ)Z, where random vector Z∼N(0,Ip). Then asymptotically differential equations (9) and (11) are, respectively, equivalent to

Appplying the perturbation method for solving ordinary differential equations, we write approximation solutions of (14) and (15) as Xn(t)=X(t)+n−1/2V(t)+o(n−1/2) and substitute it into (14) and (15). With X(t) satisfying (3) or (6), ignoring higher order terms, we obtain the following equations for the limit V(t) of Vn(t) in the two cases, respectively,

As step function xnδ(t) is used to model xnk generated from gradient descent algorithms (8) and (10). To study their weak convergence, we need to introduce the Skorokhod space, denoted by D([0,T]), of all cádlág functions on [0,T], equipped with the Skorokhod metric (Billingsely (1999)). Then xnδ(t) lives on D([0,T]), and treating it as a random element in D([0,T]), we derive its weak convergence limit in the following theorem.

There are two types of asymptotic analyses in the set up. One type is to employ continuous differential equations to model discrete sequences generated from gradient descent algorithms, which is associated with δ treated as step size between consecutive sequence points. Another type involves the use of random objective functions in stochastic optimization, which are estimated from sample data of size n. We refer the first and second types as computational (modeling) and statistical asymptotics, respectively. The computational asymptotic analysis is that for each n, differential equations (9) and (11)[or (14) and (15)] provide continuous solutions as the limits of discrete sequences generated from algorithms (8) and (10), respectively, when δ is allowed to go to zero. Theorem 3.1 provides the statistical asymptotic analysis to describe the behavior difference between the data based solutions Xn(t) and the true solutions X(t), as the sample size n goes to infinity. Theorem 3.2 involves both types of asymptotics and shows that as δ→0 and n→∞, xnδ(t)−Xn(t) is of order δ1/2. As a computational modeling parameter, δ can be any arbitrary sequence approaching zero, and we may let it depend on n and choose δ=δn that goes to zero fast enough so that xnδn(t)−Xn(t) is of order smaller than n−1/2. Then xnδn(t) has the same asymptotic distribution V(t) as Xn(t).

3.4 A framework to unify computational and statistical asymptotic analysis

The two types of asymptotics associated with δ and n seem to be quite different, with one for computational algorithms and one for statistical inferences. This section will elaborate further about these analyses and provide a framework to unify both point of views. Denote the solutions of optimization problems (1) and (7) by ˇθ and ^θn, respectively. In the statistical set-up, ˇθ and ^θn represent the true parameter value and estimator of the parameter θ, respectively. Then using the definitions of ˇθ and ^θn and Taylor expansion, we have

and the law of large number implies that ΔLn(ˇθ;Un) converges in probability to Δg(ˇθ) as n→∞. On the other hand, Assumption 4 indicates that

Since the time interval considered so far is [0,T] for any arbitrary T>0, we may extend the time intervals to IR+=[0,+∞), and consider C(IR+), the space of all continuous functions on IR+, equipped with a metric d for the topology of uniform convergence on compacta:

Suppose that the assumption A0-A4 are met, Δg(ˇθ)

is positive definite, all eigenvalues of

Furthermore, for the plain gradient descent case we have as t→∞ and k→∞,

The joint asymptotic analysis provides a unified framework to describe distribution limits of Xn(t) and xnδ(t) from both computation and statistical points of view as follows. For t∈[0,∞), X(t) and V(t) gives the limiting behaviors of Xn(t) and xnδ(t) corresponding to computational algorithms, and X(∞) and V(∞) illustrate their limiting behaviors of the corresponding statistical decision rule ^θn (or the exact solutions of the corresponding optimization problems (1) and (7) that the algorithms are designed to compute). We use the following simple example to explicitly illustrate the joint asymptotic analysis.

and an exponential distribution with mean