Assumption-Based Approaches to Reasoning with Priorities 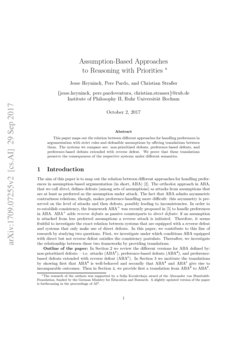 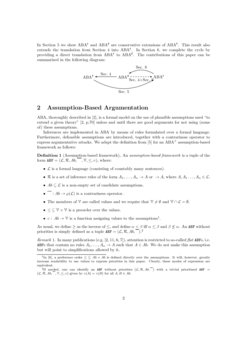 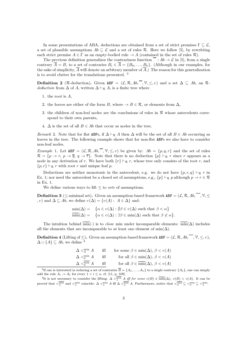 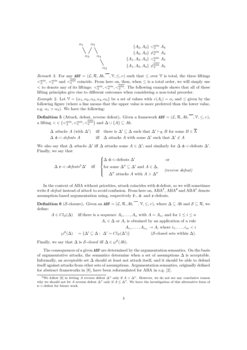 Deontic modality based on preference

Relations between assumption-based approaches in nonmonotonic logic and formal argumentation

In this paper we make a contribution to the unification of formal models...
Jesse Heyninck, et al. ∙

Transitivity, Time Consumption, and Quality of Preference Judgments in Crowdsourcing

Preference judgments have been demonstrated as a better alternative to g...
Kai Hui, et al. ∙

Representing and Reasoning with Qualitative Preferences for Compositional Systems

The aim of this paper is to map out the relation between different approaches for handling preferences in assumption-based argumentation (in short, ABA) [2]. The orthodox approach in ABA, that we call direct, defines defeats (among sets of assumptions) as attacks from assumptions that are at least as preferred as the assumption under attack. The fact that ABA admits asymmetric contrariness relations, though, makes preference-handling more difficult: this asymmetry is preserved on the level of attacks and then defeats, possibly leading to inconsistencies. In order to re-establish consistency, the framework ABA+ was recently proposed in [5] to handle preferences in ABA. ABA+ adds reverse defeats as passive counterparts to direct defeats: if an assumption is attacked from less preferred assumptions a reverse attack is initiated. Therefore, it seems fruitful to investigate the exact relation between systems that are equipped with a reverse defeat and systems that only make use of direct defeats. In this paper, we contribute to this line of research by studying two questions. First, we investigate under which conditions ABA equipped with direct but not reverse defeat satisfies the consistency postulate. Thereafter, we investigate the relationship between these two frameworks by providing translations.

Outline of the paper: In Section 2 we review the different versions for ABA defined by: non-prioritized defeats —i.e. attacks (ABAf), preference-based defeats (ABAd), and preference-based defeats extended with reverse defeat (ABAr). In Section 3 we motivate the translations by showing first that ABAd is well-behaved and secondly that ABAd and ABAr give rise to incomparable outcomes. Then in Section 4, we provide first a translation from ABAd to ABAf. In Section 5 we show ABAr and ABAd are conservative extensions of ABAf. This result also extends the translation from Section 4 into ABAr. In Section 6, we complete the cycle by providing a direct translation from ABAr to ABAd. The contributions of this paper can be summarized in the following diagram:

ABA, thoroughly described in [2], is a formal model on the use of plausible assumptions used “to extend a given theory” [2, p.70] unless and until there are good arguments for not using (some of) these assumptions.

Inferences are implemented in ABA by means of rules formulated over a formal language. Furthermore, defeasible assumptions are introduced, together with a contrariness operator to express argumentative attacks. We adapt the definition from [5] for an ABA+ assumption-based framework as follows:

In many publications (e.g. [2, 11, 6, 7]), attention is restricted to so-called flat ABFs, i.e. ABFs that contain no rules A1,…,An→A such that A∈Ab. We do not make this assumption but will point to simplifications allowed by it.

Note that for flat ABFs, if Δ⊢RA then Δ will be the set of all B∈Ab occurring as leaves in the tree. The following example shows that for non-flat ABFs we also have to consider non-leaf nodes.

Deductions are neither monotonic in the antecedent, e.g. we do not have {p,r,q}⊢Rr in Ex. 1; nor need the antecedent be a closed set of assumptions, e.g., {p}⊢Rp although p→r∈R in Ex. 1.

We define various ways to lift ≤ to sets of assumptions.

Let V={α1,α2,α3,α4,α5} be a set of values with υ(Ai)=αi and ≤ given by the following figure (where a line means that the upper value is more preferred than the lower value, e.g. α1>α3). We have the following:

We also say that Δ attacks Δ′ iff Δ attacks some A∈Δ′; and similarly for Δ d-<-defeats Δ′. Finally, we say that

In the context of ABA without priorities, attack coincides with d-defeat, so we will sometimes write f-defeat instead of attack to avoid confusion. From here on, ABAf, ABAd and ABAr denote assumption-based argumentation using, respectively f-, d- and r-defeats.

The consequences of a given ABF are determined by the argumentation semantics. On the basis of argumentative attacks, the semantics determine when a set of assumptions Δ is acceptable. Informally, an acceptable set Δ should at least not attack itself, and it should be able to defend itself against attacks from other sets of assumptions. Argumentation semantics, originally defined for abstract frameworks in [8], have been reformulated for ABA in e.g. [2].

We will denote naive, grounded, preferred resp. stable by naiv, grou, pref, stab. For any semantics sem∈{naiv,grou,pref,stab}, we define x-sem<S(ABF) as the sets of assumptions that are x-<-S-sem, as defined above. 666Since the order < does not matter in any semantics f-sem<S(ABF) or f-<-S-sem, we will simply write this as f-semS(ABF) and, resp., f-S-sem.

In many papers (e.g. [2, 5]), a set Δ is admissible if it can defend itself from every R-closed set of assumptions that defeats Δ. In the context of priorities, however, this might not always be the most intuitive outcome, as demonstrated by Ex. 3. Therefore, we define both semantics where this requirement is enforced (setting S=R in Def. 7) and semantics where defeaters are not required to be closed (setting S=∅ in Def. 7).

One might ask if it is more intuitive to have {p,r} and {q} as complete extensions, or just {p,r} (which contains the <-maximal element r). Here we study both options. This example motivates studying defeaters that are not closed under the full set R, as in Ex. 3. In Section 6, we will see an example of an ABF whose defeaters should be closed under a proper subset of the set of rules R. For another example of semantics parametrized with a set of rules, although for different purposes, see [4].

3 Some considerations on ABAd and ABAr

In this section we motivate the translations given in Sections 4 and 6. First we show that ABAd is well-behaved: it satisfies the postulate of Consistency under the assumption of contraposition. Secondly, we show that even with contraposition, ABAd and ABAr might produce incomparable outcomes.

(see Theorem 1 below for a formal statement). One of the reasons for introducing reverse defeats in ABAr is to avoid violations of the postulate of consistency by preserving conflicts between assumptions even if the attacking assumptions are strictly less preferred then the attacked assumption. The following example shows that for ABAd, conflicts are not necessarily preserved:

Accordingly, one might ask under which conditions consistency is preserved in the context of ABAd. As in ASPIC+ [9], one might start by looking at contraposition-like properties.

ABF=(L,R,Ab,¯¯¯¯A,V,≤,υ) is closed under contraposition if for every non-empty Δ⊆Ab:

The proof of all results in this paper are left out due to space restrictions.

Note that Theorem 1 immediately implies that if Δ is d-<-S-naive, -preferred, -grounded or -stable then for no A∈Ab, we have A∈Δ and Δ⊢R¯¯¯¯A.

On the relation between ABAd and ABAr

Since ABAr reverse-defeat is essentially a form of contrapositive reasoning (cf. Section 6), one might ask whether a given ABF closed under contraposition gives the same outcomes under ABAd (i.e. without reverse-defeat) and ABAr. A partial answer is given by the following result:

However, in general the two approaches produce different outcomes (as can be verified by inspection of [11, Ex. 13]):

The translation from ABAd into ABAf essentially embeds the priority ordering ≤ over V into an expanded object language LV. The expanded language LV contains atoms Aα for each atom A∈L and value α∈V, and we translate

(In fact, we expand the set V with a maximum element ω, and abusing notation we denote V∪{ω} again as V.) With more detail, we translate into non-prioritized ABA frameworks as follows: the assumptions Aυ(A)∈τ(Ab) encode the priority υ(A) of the assumption A∈Ab; the rules in τ(R) carry over the antecedents’ priorities to the consequent by taking their minimal value; and the contrariness operator ¯¯¯¯A′ (again written as ¯¯¯¯A for simplicity) mirrors the idea of d-defeat being an attack that succeeds by restricting the contrary pairs A∈¯¯¯¯B to those pairs Aα∈¯¯¯¯¯¯¯Bβ satisfying α≮β.

We first discuss the translation for flat, totally ordered frameworks, thereafter explaining the complications when these restrictions are given up.

The need for modifying Def. 9 in non-flat frameworks is shown next.

Let us proceed to define a translation for the lifting <¯¯¯¯¯¯¯¯min∀ (see Def. 4) which is adequate for frameworks whose preorder (V,≤) is not necessarily total.

Examples like 6 are handled in the translation in Def. 10 by translating rules r=A1,…,An→A in a slighlty different way: each antecedent Ai in the rule r is translated below into a pair Aαii,Ag(Ai)i of antecedents in τ(r).

An additional change to Def. 9 can be motivated by Ex. 6 as well. Indeed, note that the set {p3} would be closed in the translated framework τ(ABF) with Def. 9 since p3→q3∈τ(R) but p3→q1∉τ(R). However, {p} is not closed in ABF and it can be easily seen that this gives rise to non-adequacies in any of the semantics defined. This can be fixed by adding new rules in τ(R) of the form: Aα→Aυ(A) for any A∈Ab and α∈V.

For these two liftings, further complications arise, the investigation of which is left for future work.

5 ABAf as a special case of ABAr and ABAd

Suppose a framework ABF=(L,R,Ab,¯¯¯¯A,V,≤,υ) is given, where υ is defined by trivial priorities: υ(A)=υ(B) for any A,B∈Ab. It can be easily verified that both the d-<-S-sem and r-<-S-sem sets of assumptions coincide with f-S-sem sets of assumptions for all liftings in Def. 4. This means that we can capture ABAf in both ABAr and ABAd, i.e. both ABAr and ABAd are conservative extensions of ABAf, generalizing Theorem 5 in [6].

The translation from ABAr into ABAd is based on the idea that reverse-defeat in ABAr is an instance of contrapositive reasoning: whenever Δ⊢R¯¯¯¯A but Δ is strictly less preferred than A, then we should instead reject Δ. This means that an assumption can r-defeat a set of assumptions without attacking any particular member of this set; e.g. it can be observed in Ex. 6 that r r-defeats {p,q} without r-defeating {p} or {q}. Note that this mechanism from ABAr is ruled out in ABAd: whenever Δ d-defeats Θ, then Δ⊢R¯¯¯¯B for some B∈Θ. In order to capture it within ABAd, we proceed stepwise: first, we add a conjunction ∧ to ABAr to make explicit the ABAr way of defeating a set of assumptions; second, we translate frameworks with conjunction: from ABAr∧ to ABAd∧. These two steps expand the set R with, first, rules for the introduction and elimination of conjunction and, second, with contrapositive rules.

In the following, let Δ′⊆finΔ denote that Δ′ is a finite subset of Δ, and let ℘fin(Δ)={Δ′: Δ′⊆finΔ}.

where ⋀{A1,…,An}=A1∧…∧An,999In order not to clutter notation we omit brackets and assume the connective ∧ to be commutative and associative. An enumeration (A0,A1,…,An,…) of the countably-many sentences in L can be used to define a canonical form for conjunctions, e.g. in increasing order: ⋀{An0,…,Ank}=An0∧…∧Ank for n0<…<nk. and for any A1,…,An∈Ab and any A∈Δ⊆Ab with ⋀Δ∈Ab, the set R is closed under the following:

From now on, we proceed as follows: if an ABF has no conjunction we add one, otherwise we use the one present in ABF. In either case, the ∧-closure of the language L is defined as L∧=L∪Ab∧I, and the closure of the set of rules is denoted R∧=R∪∧I∪∧E.