The cardiologist's main tool for measuring systolic heart failure is left ventricular ejection fraction (LVEF). Trained cardiologist's report both a visual and machine-guided measurement of LVEF, but only use this machine-guided measurement in analysis. We use a Bayesian technique to combine visual and machine-guided estimates from the PARTNER-IIA Trial, a cohort of patients with aortic stenosis at moderate risk treated with bioprosthetic aortic valves, and find our combined estimate reduces measurement errors and improves the association between LVEF and a 1-year composite endpoint. 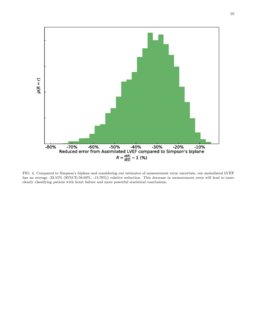 We expressed our uncertainty in a patient’s true LVEF by placing a normal distribution on top of the cardiologist’s visual LVEF estimate with a 18.1% standard deviation reported from previous work

van1996comparison . The next step overlaid a normal distribution over top of the cardiologist’s measurement of LVEF with Simpson’s biplane method with a 8.8% standard deviation reported from previous work chuang2000importance

where N represents a Normal distribution with θ equal to

. For each measurement error, we consider a non-informative Gamma-distributed prior and Gamma likelihood. We draw

long Markov-chain Monte-Carlo chain with Normally distributed proposal for both visual and Simpson’s measurement error, and from each parameter sample, draw a predictive measurement error. Each pair of (visual, Simpson) measurement error predictions corresponds to a relative reduction and can quantify our uncertainty in

We also applied the above measurement error model to create more robust statistical inferences in time to event analysis. Our first step draws samples from each patient’s LVEF distribution. This first step represents the measurement-error step of our model. The next step applies Kaplan-Meier methodology and Cox-proportional hazards model to predict 1

year death, rehospitalization, and stroke as if each LVEF measurement was exact. The last step compiles the N test statistics created from the novel assimilated LVEF’s predictions to conclude how differences in LVEF affect the

We explored the relationship of this novel assimilated LVEF with a composite of death, stroke, and rehospitalization at to 1 year, and found the strength of association between LVEF and outcome weakest for visually estimated LVEF, stronger for Simpson’s biplane method, and strongest for using our assimilated method (Figure 5

). The visually estimated LVEF measurements show the most variability with Kaplan-Meier’s 95% credible intervals overlapping throughout the full 365 days (Figure

We acknowledge several limitations for this study. The cohort we studied was a subset of patients from the entire trial, though this subset did not differ in baseline characteristics from the overall cohort. This analysis was not pre-specified and suffers from the same limitations of any retrospective analyses. The estimates for LVEF variability depended on small samples from previous studies and needs more data to better estimate interobserver variability.

This work aspires toward a more robust way to study relationships between clinical measurements and outcomes, reduce measurement error, and shows the cardiologist’s intuition (derived from years of experience and iterative self-correction) remains a valuable tool.

Conflict of interest: None declared.