Assessing the reliability polynomial based on percolation theory

In this paper, we study the robustness of network topologies. We use the concept of percolation as measuring tool to assess the reliability polynomial of those systems which can be modeled as a general inhomogeneous random graph as well as scale-free random graph. 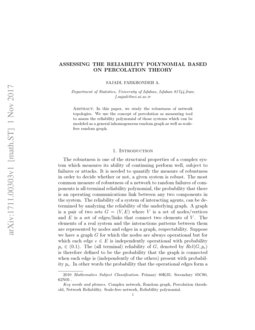 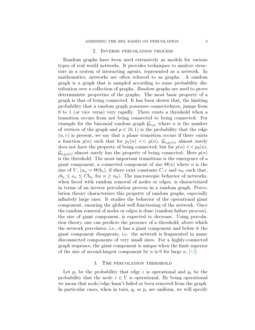 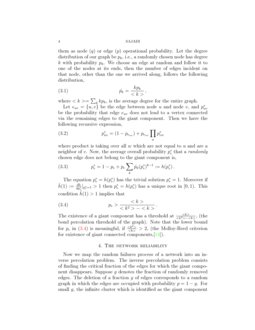 The robustness is one of the structural properties of a complex system which measures its ability of continuing perform well, subject to failures or attacks. It is needed to quantify the measure of robustness in order to decide whether or not, a given system is robust. The most common measure of robustness of a network to random failures of components is all-terminal reliability polynomial, the probability that there is an operating communications link between any two components in the system. The reliability of a system of interacting agents, can be determined by analyzing the reliability of the underlying graph. A graph is a pair of two sets

G=(V,E) where V is a set of nodes/vertices and E is a set of edges/links that connect two elements of V. The elements of a real system and the interactions patterns between them are represented by nodes and edges in a graph, respectability. Suppose we have a graph G for which the nodes are always operational but for which each edge e∈E is independently operational with probability pe∈(0.1). The (all terminal) reliability of G, denoted by Rel(G,pe) is therefore defined to be the probability that the graph is connected when each edge is (independently of the others) present with probability pe. In other words the probability that the operational edges form a spanning connected subgraph of G. Let set of operational edges S⊆E be the state of network, i.e., the network is in state S when all edges of S are operational and all edges E−S are failing. Let O be the set of all operational states. Then Rel(G,pe) is equal to

By knowing all states, the reliability is easily but not efficiently computed. The most amenable case is that in which all of the edge probabilities are identical, say p. Therefore under the condition that for all e∈E,pe=p we have simpler version of formula(1.1), which is called F-form of the reliability polynomial, as follows

where Fi is the number of connected spanning subgraphs of size |E|−i. There are different forms of presentation for the reliability polynomial [1]. Also there are methods to examine the possible states of the network, for example the factorization method [2]. However, computing the reliability polynomial, Rel(G,pe) is not easy in general. Even the time required to calculate R(G,p) for an arbitrary connected graph G grows exponentially with the size of the network, [3],[4].

The rest of the paper is organized as follows. In Section 2 we describe the inverse percolation process. In Section 3 we explain how to obtain the threshold at which the network loses its connectivity. Section 4 presents the assessment of network reliability. Section 5 and 6, will illustrate our method for two special case of real network which can be modeled as inhomogeneous and scale free random graph, respectively.

Random graphs have been used extensively as models for various types of real world networks. It provides techniques to analyze structure in a system of interacting agents, represented as a network. In mathematics, networks are often referred to as graphs. A random graph is a graph that is sampled according to some probability distribution over a collection of graphs.

is present, we say that a phase transition occurs if there exists a function

p(n) such that for p1(n)<<p(n), Gn,p1(n) almost surely does not have the property of being connected, but for p(n)<<p2(n), Gn,p2(n) almost surely has the property of being connected. Here p(n) is the threshold. The most important transitions is the emergence of a giant component, a connected component of size Θ(n) where n is the size of V, (an=Θ(bn), if there exist constants C,c and n0, such that, cbn≤an≤Cbn, for n≥n0). The macroscopic behavior of networks, when faced with random removal of nodes or edges, is characterized in terms of an inverse percolation process in a random graph. Percolation theory characterizes this property of random graphs, especially infinitely large ones. It studies the behavior of the operational giant component, ensuring the global well functioning of the network. Once the random removal of nodes or edges is done (random failure process), the size of giant component, is expected to decrease. Using percolation theory, one can predicts the presence of a threshold, above which the network percolates, i.e., it has a giant component and below it the giant component disappears, i.e. the network is fragmented in many disconnected components of very small sizes. For a highly-connected graph sequence, the giant component is unique when the limit superior of the size of second-largest component by n is 0 for large n, [13].

Let pe be the probability that edge e is operational and qv be the probability that the node v∈V is operational. By being operational we mean that node/edge hasn’t failed or been removed from the graph. In particular cases, when in turn, qv or pe are uniform, we will specify them as node (q) or edge (p) operational probability. Let the degree distribution of our graph be pk, i.e., a randomly chosen node has degree k with probability pk. We choose an edge at random and follow it to one of the nodes at its ends, then the number of edges incident on that node, other than the one we arrived along, follows the following distribution,

where <k>=∑kkpk, is the average degree for the entire graph.

Let euv={u,v} be the edge between node u and node v, and p∗uv be the probability that edge euv does not lead to a vertex connected via the remaining edges to the giant component. Then we have the following recursive expression,

where product is taking over all w which are not equal to u and are a neighbor of v. Now, the average overall probability p∗e that a randomly chosen edge does not belong to the giant component is,

The existence of a giant component has a threshold at <k><k2>−<k>, (the bond percolation threshold of the graph). Note that the lower bound for pc in (3.4) is meaningful, if <k2><k>>2, (the Molloy-Reed criterion for existence of giant connected components,[14]).

Now we map the random failures process of a network into an inverse percolation problem. The inverse percolation problem consists of finding the critical fraction of the edges for which the giant component disappears. Suppose g denotes the fraction of randomly removed edges. The deletion of a fraction g of edges corresponds to a random graph in which the edges are occupied with probability p=1−g. For small g, the infinite cluster which is identified as the giant component is present. The threshold for the destruction of the giant component, gc=1−pc, can be thus computed from the percolation threshold at which the infinite cluster first emerges. In this case the phase transition corresponds to the separation of a region of damages which still allow a connected network of appreciable size from a region in which the system is totally fragmented, [15].

Let pe(t) be the probability that edge e is operational at time t, (the reliability of edge e at time t). Also we define qv(t), to be the probability that at time t the node v∈V is operational. According to the previous section, if pe(t) is less than a critical point pc, the giant cluster does not exist anymore. Define the instant at which this occurs as the lifetime of the network.

It is known that [13], the binomial (uniform) random graph loses its connectivity when the number of failed edges reaches (n2)−[Mc], where Mc is the number of remaining edges at critical point. Since pc is a threshold for a monotone property of being connected, we have Mc=pc∗(n2),[13].

Now using threshold pc, an assessment for the network reliability at time t, denoted by ^Relc(G,pe)(t) is given by the following equation:

In [12], authors have defined the probability that a node/edge is functional at a given time t by R(t). Then by the voting system based on the cite percolation critical value, they presented the network reliability at time t, Rs(t) by the following equation:

The reliability of complete graph K4 where pe(t)=p(t) for all edges e in E, at given time t is

as any sub-graph on at least 4 edges is operational and sub-graphs with 3 edges that are operational are those that are a spanning tree of K4. There are no operational states with 2 or fewer edges. On the other hand, for complete graph K4, we have pc=13. Therefore [Mc]+1=[(42)∗13]+1=3. Hence we get same value for the reliability of K4 from equations (4.2) and (4.1).

The lifetime distribution of the network based on ^Relc(G,pe)(t) is

and the network lifetime, T, is given by

Still, the computing of ^Relc(G,p)(t) in (4.1) by enumerating all elements in [N]i for large N, is not practicable. Thus we need to use approximation methods for computing ^Relc(G,p)(t)

. One can think of Poisson approximation method, which is used for Poisson binomial distribution( the distribution of the sum of independent and non-identical random indicators). Fix

In the following section, we look at an application of these results to some specific examples. We consider the system which can be modeled as

Suppose we have a graph G on 5

nodes and the vector of edge probabilities at a given time

In Figure 1, graph G is presented.

Note that ^Relc(G,p)(t) drops abruptly at pc=0.421053. The corresponding t for this threshold present the life time of network (between 4 and 5). In Figure 3, the evolution of the network G is studied.

In the scale-free networks majority of the nodes have few neighbors but a small portion of them have a large number of neighbors. Many of them possess a power-law degree distribution, so that the probability pk that a node has k neighbors scales with k as pk∼k−γ, where γ is the power-law exponent [19]. Topologies of many real-world networks are thought to be scale-free, such as World Wide Web, email networks, networks of Internet routers, and protein-protein interaction networks. Here we consider the degree distribution as follows:

where γ and κ are constant and Liγ(x) is the polylogarithm function:

For power-law degree distribution, the giant component threshold is,

The divergence of the second moment

<k2> is generally a sufficient condition to ensure the absence of a percolation threshold on a scale-free graph.

It is known that for γ>3 a phase transition exists at a finite pc. Whereas for 2<γ<3 the transition takes place only at pc=0, [20].

Suppose we have a graph G in which its degree distribution is as follows:

where ζ(.) is the Riemann zeta function. Therefore from (6.2) we have

Note that Liγ(1)=ζ(γ). For many scale-free networks the degree exponent γ is between 2 and 3, [19]. The behavior of pc as a function of γ is depicted in Figure 5. As the figure shows, for γ≤3,pc=0 and hence the transition never takes place (unless the network is finite). Also pc is between zero and one, only in the small range 3<γ<3.48 of the exponent γ.

As an example of real world network, we consider the internet. The degree distribution of the internet nodes follows a power law :

where c is normalization constant and kmin and kmax are the minimal and maximal degrees, respectively, [21]. For this model we have