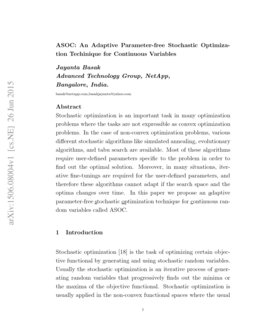 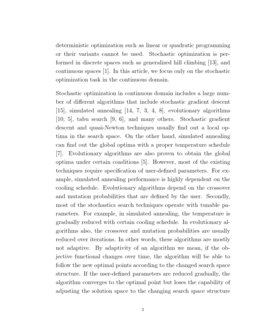 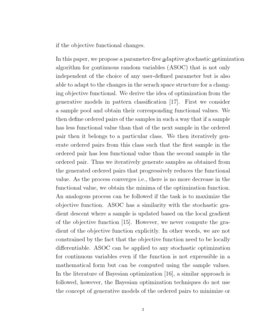 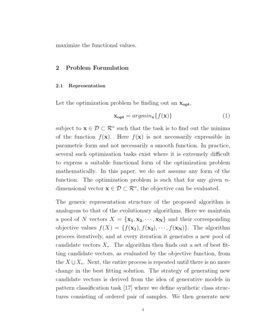 In all but the most trivial optimization problems, the structure of the ...
Shumeet Baluja, et al. ∙

[15], simulated annealing [14, 7, 3, 4, 8], evolutionary algorithms [10, 5], tabu search [9, 6], and many others. Stochastic gradient descent and quasi-Newton techniques usually find out a local optima in the search space. On the other hand, simulated annealing can find out the global optima with a proper temperature schedule [7]. Evolutionary algorithms are also proven to obtain the global optima under certain conditions [5]

. However, most of the existing techniques require specification of user-defined parameters. For example, simulated annealing performance is highly dependent on the cooling schedule. Evolutionary algorithms depend on the crossover and mutation probabilities that are defined by the user. Secondly, most of the stochastics search techniques operate with tunable parameters. For example, in simulated annealing, the temperature is gradually reduced with certain cooling schedule. In evolutionary algorithms also, the crossover and mutation probabilities are usually reduced over iterations. In other words, these algorithms are mostly not adaptive. By adaptivity of an algorithm we mean, if the objective functional changes over time, the algorithm will be able to follow the new optimal points according to the changed search space structure. If the user-defined parameters are reduced gradually, the algorithm converges to the optimal point but loses the capability of adjusting the solution space to the changing search space structure if the objective functional changes.

In this paper, we propose a parameter-free adaptive stochastic optimization algorithm for continuous random variables (ASOC) that is not only independent of the choice of any user-defined parameter but is also able to adapt to the changes in the serach space structure for a changing objective functional. We derive the idea of optimization from the generative models in pattern classification [17]

[15]. However, we never compute the gradient of the objective function explicitly. In other words, we are not constrained by the fact that the objective function need to be locally differentiable. ASOC can be applied to any stochastic optimization for continuous variables even if the function is not expressible in a mathematical form but can be computed using the sample values. In the literature of Bayesian optimization [16], a similar approach is followed, however, the Bayesian optimization techniques do not use the concept of generative models of the ordered pairs to minimize or maximize the functional values.

Let the optimization problem be finding out an xopt,

x∈D⊂Rn, the objective can be evaluated.

The generic representation structure of the proposed algorithm is analogous to that of the evolutionary algorithms. Here we maintain a pool of N vectors X={x1,x2,⋯,xN} and their corresponding objective values f(X)={f(x1),f(x2),⋯,f(xN)}. The algorithm procees iteratively, and at every iteration it generates a new pool of candidate vectors X∗. The algorithm then finds out a set of best fitting candidate vectors, as evaluated by the objective function, from the X⋃X∗. Next, the entire process is repeated until there is no more change in the best fitting solution. The strategy of generating new candidate vectors is derived from the idea of generative models in pattern classification task [17] where we define synthetic class structures consisting of ordered pair of samples. We then generate new samples from this class structure such that a new sample is randomly drawn that is expected to be better than the best in the existing pool of samples.

2.2 Optimization as a Generative Model

As mentioned before, the pool of N candidate vectors is represented as X={x1,x2,⋯,xN}. Without loss of generality, let us assume that the pool of vectors be sorted as x1≺x2≺⋯≺xN according to their objective values such that in f(X),

where f(x) denote the objective functional value of the vector x. With this representation, we transform the problem into a space of ordered pair of vectors yij=[xi,xj]′ where ′ indicates transpose. In other words, let the vector notation of the n-dimensional vector xi be given as xi=[xi1,xi2,⋯,xin]′. The concatenated vector yij is then given as

We therefore obtain N(N−1) such ordered pair of vectors for all i, j, i≠j. We partition these concatenated vectors into two classes namely Ω1 and Ω2 each containing N(N−1)/2 concatenated samples such that

Once we obtain such a partition, the class structures of Ω1 and Ω2

are defined by the pool vectors subject to certain density estimate. Once the class structure is defined, the next task is to obtain one candidate vector

with a sorted pool X.

where μ and Σ are determined from all samples in Ω1. Then the distribution of X∗ with the condition X=x1 is given as N(^μ,^Σ) where

Once we obtain the distribution of X∗ as N(^μ,^Σ), we generate new samples from that distribution.

The new sample generation process is similar to stochastic gradient descent [15] process except the fact that the new samples are generated from the estimated target distribution instead of a deterministic point generated from the gradient. The nature of the target distribution depends on the previous distribution of the samples. In simulated annealing, the acceptance probability of an inferior solution is modulated by exp(−ΔE/T) where T is the temperature and ΔE is the increase in the objective functional value of the inferior solution. As T goes to zero, the acceptance probability goes to zero. In ASOC, we guide the selection process to iteratively adapt the new solution towards the minima. In our case, there is no temperature schedule or cooling process as used in the simulated annealing. Our technique is completely adaptive and depends on the pool of samples. Even if the functional value changes, the technique automatically adapts the samples to select the new optima.

We start with a randomly generated sample pool in D. Let S be a sample pool having 2N samples. We first sort the S in ascending order according to the functional values of the samples, and select the top N samples from that pool. Let this sample pool be X having N samples. We then compute (^μ,^Σ) from these sample pool X. Next we draw N samples randomly in D using N(^μ,^Σ). Let this sample pool be X∗. We then have the sample set S=X⋃X∗, and again sort S in ascending order of the functional values and repeat the entire process to generate new set of samples. We iteratively generate the new samples until there is no significant change in the best solution. Note that the samples in X∗ may be inferior to the best sample in X and in that case the best sample in X will automatically move to the next iteration. In other words, we always follow the elitist selection mechanism unlike the simulated annealing.

We summarize the overall algorithm in this section.

Problem: Find the minima of a given objective function f(.) in the n-dimensional continuous space such that

subject to x∈D⊂Rn. The objective function need not be continuous and differentiable.

One of the major advantage of the proposed search algorithm is that it is totally free from any user defined parameter. The state-of-the-art stochastic search algorithms such as the class of simulated annealing and genetic algorithms highly depend on user-defined parameters. For example, in simulated annealing, the search process is guided by an artificial cooling schedule defined by temperature. The schedule of decreasing the temperture is decided beforehand. Similarly, in evolutionary algorithms, the performance depends on the crossover and mutation probabilities and these probability values are user-defined.

We have implemented the ASOC in Matlab in the Windows XP environment. We have chosen a population size (N) = 30 and observed the convergence properties of the ASOC algorithm for 2000 generations. As a comparison, we optimized the functions using both simulated annealing and genetic algorithm for continuous variables. In simlated annelaing, we iterated for 2000 iterations and in each iteration we generated samples randomly with a constant temperature for 50 times. We reduced the temperature following a logarithmic schedule over 2000 iterations. For the genetic algorithm, we used elitist model where the best chromosome is always passed into the next generation.

From Table 2, we observe that GA and ASOC can obtain the optimal points in most of the cases. For Easom function, none of the techniques are successful in obtaining the minimal point. For Rosenbrock function, we observe that ASOC outperforms GA for a dimensionality equal to 3. For the same function, simulated annealing did not converge.

In simulated annealing, the temperature is reduced to obtain the global optima. However, if the nature of the optimization function changes, then SA will not be able to adapt to the new situation and find the new optima. On the other hand, ASOC is practically parameter-free optimization technique and it continues to generate new samples in the vicinity of the optima once it has converged. If the nature of the optimization function changes then it gracefully switches over to the new optima location and adapts the solution space. In order to show the effectiveness of ASOC to adapt to the new situation, we change the function from function number 2 to 18 (as in Table 1) and run ASOC for each function for 2000 iterations without reinitializing the samples. It is as if once the algorithm has converged, a new optima appears. We did not consider the function number 1 (Table 1) because function 1 and function 2 has the same optima locations. Figure 1 illustrates how the optima changes as the function changes. We observe that ASOC is indeed able to follow the changing pattern of the optimization problem.

We have presented a new adaptive parameter-free stochastic optimization technique called ASOC. We have demonstrated that ASOC can find the optimal solution on certain benchmark problems. Simulated annealing converges to the global optima with suitably chosen cooling schedule [3, 11]. Evolutionary algorithms are also globally convergent under certain conditions [5]. The convergence properties of ASOC require further analysis. A possible approach towards proving the convergence under a generalized framework of such optimization algorithms is provided in [21, 2].

We generate new samples considering the class of ordered pair of samples as a single cluster and therefore we derive a single mean and covariance matrix. It is possible to extend ASOC by clustering the ordered pair of samples into different clusters and generating means and covariance matrices for each cluster separately. In this way, we will have more variability in the generated samples that may lead to better convergence. ASOC finds out one optimal point for a given single objective functional. It is possible to extend ASOC to find out pareto-optimal solutions for multi-objective functionals as a constituent future work.