Are Perceptually-Aligned Gradients a General Property of Robust Classifiers?

For a standard convolutional neural network, optimizing over the input pixels to maximize the score of some target class will generally produce a grainy-looking version of the original image. However, researchers have demonstrated that for adversarially-trained neural networks, this optimization produces images that uncannily resemble the target class. In this paper, we show that these "perceptually-aligned gradients" also occur under randomized smoothing, an alternative means of constructing adversarially-robust classifiers. Our finding suggests that perceptually-aligned gradients may be a general property of robust classifiers, rather than a specific property of adversarially-trained neural networks. We hope that our results will inspire research aimed at explaining this link between perceptually-aligned gradients and adversarial robustness. 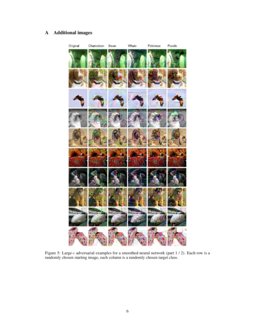 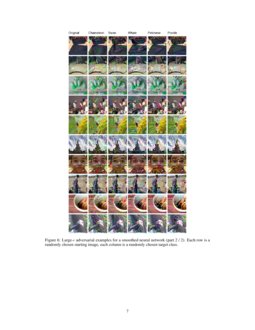 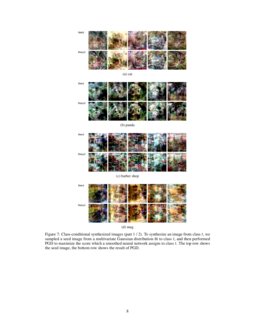 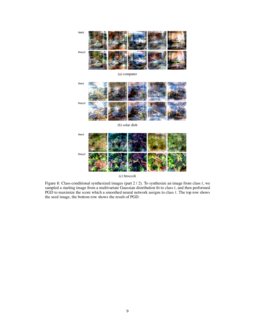 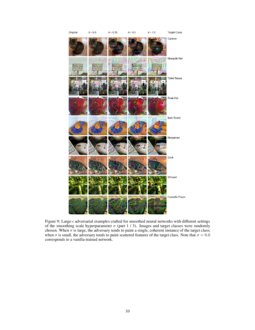 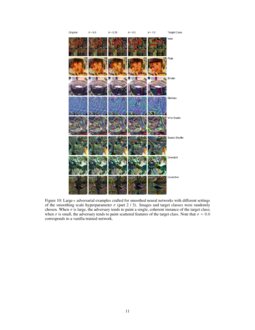 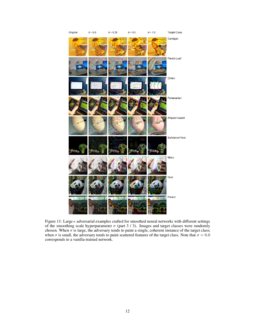 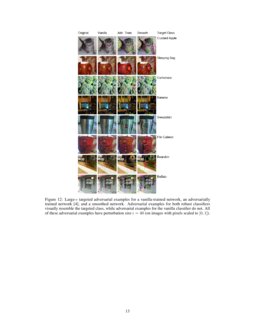 Classifiers are called adversarially robust if they achieve high accuracy even on adversarially-perturbed inputs [szegedy2014intriguing, biggio2013evasion]. Two effective techniques for constructing robust classifiers are adversarial training and randomized smoothing. In adversarial training, a neural network is optimized via a min-max objective to achieve high accuracy on adversarially-perturbed training examples [szegedy2014intriguing, kurakin2017adversarial, madry2017towards]. In randomized smoothing, a neural network is smoothed by convolution with Gaussian noise [lecuyer2018certified, li2018second, cohen2019certified, salman2019provably]. Recently, [tsipras2018robustness, santurkar2019image] demonstrated that adversarially-trained networks exhibit perceptually-aligned gradients: iteratively updating an image by gradient ascent so as to maximize the score assigned to a target class will render an image that perceptually resembles the target class.

In this paper, we show that smoothed neural networks also exhibit perceptually-aligned gradients. This finding suggests that perceptually-aligned gradients may be a more general property of robust classifiers, and not only a curious consequence of adversarial training. Since the root cause behind the apparent relationship between adversarial robustness and perceptual alignment remains unclear, we hope that our findings will spur foundational research aimed at explaining this connection.

Let f:Rd→Rk be a neural network image classifier that maps from images in Rd to scores for k classes. Naively, one might hope that by starting with any image x0∈Rd and taking gradient steps so as to maximize the score of a target class t∈[k], we would produce an altered image that better resembled (perceptually) the targeted class. However, as shown in Figure 1, when f is a vanilla-trained neural network, this is not the case; iteratively following the gradient of class t’s score appears perceptually as a noising

of the image. In the nascent literature on the explainability of deep learning, this problem has been addressed by adding explicit regularizers to the optimization problem

Across many studies, adversarially-trained neural networks have proven empirically successful at resisting adversarial attacks within the threat model in which they were trained [athalye2018obfuscated, brendel2019accurate]. Unfortunately, when the networks are large and expressive, no known algorithms are able to provably certify this robustness [salman2019convex], leaving open the possibility that they will be vulnerable to better adversarial attacks developed in the future.

For this reason, a distinct approach to robustness called randomized smoothing has recently gained traction in the literature [lecuyer2018certified, li2018second, cohen2019certified, salman2019provably]. In the ℓ2-robust version of randomized smoothing, the robust classifier ^fσ:Rd→Rk is a smoothed neural network of the form:

where f:Rd→Rk is a neural network (ending in a softmax) called the base network. In other words, ^fσ(x), the smoothed network’s predicted scores at x, is the weighted average of f within the neighborhood around x, where points are weighted according to an isotropic Gaussian centered at x

σ2. A disadvantage of randomized smoothing is that the smoothed network ^fσ cannot be evaluated exactly, due to the expectation in (1), and instead must approximated via Monte Carlo sampling. However, by computing ^fσ(x) one can obtain a guarantee that ^fσ’s prediction is constant within an ℓ2 ball around x; in contrast, it is not currently possible to obtain such certificates using neural network classifiers. See Appendix B for more background on randomized smoothing.

In this paper, we show that smoothed neural networks exhibit perceptually-aligned gradients. By design, our experiments mirror those conducted in [santurkar2019image]. To begin, we synthesize large-ϵ targeted adversarial examples for a smoothed (σ=0.5)

The gradient of the objective (2) cannot be computed exactly, due to the expectation over ε

, so we instead used an unbiased estimator obtained by sampling

Next, as in [santurkar2019image], we use the smoothed network to class-conditionally synthesize images. To generate an image from class t, we sample a seed image x0 from a multivariate Gaussian fit to images from class t, and then we iteratively take gradient steps to maximize the score of class t using objective (2). Figure 3 shows two images synthesized in this way from each of seven ImageNet classes. The synthesized images appear visually similar to instances of the target class, though they often lack global coherence — the synthesized solar dish includes multiple overlapping solar dishes.

Smoothed neural networks have a hyperparameter

σ which controls a robustness/accuracy tradeoff: when σ is high, the smoothed network is more robust, but less accurate [lecuyer2018certified, cohen2019certified]. We investigated the effect of σ on the perceptual quality of generated images. Figure 4 shows large-ϵ adversarial examples crafted for smoothed networks with σ varying in {0.25,0.50,1.00}. Observe that when σ is large, PGD tends to paint single instance of the target class; when σ is small, PGD tends to add spatially scattered features.

In Appendix C, we study the effects of the following factors on the perceptual quality of the generated images: the number of Monte Carlo noise samples N

, the loss function used for PGD, and whether the base network

Randomized smoothing is relatively new to the literature, and few comprehensive references exist. Therefore, in this appendix, we review some basic aspects of the technique.

Randomized smoothing refers to a class of adversarial defenses in which the robust classifier g:Rd→[k] that maps from an input in Rd to a class in [k]:={1,…,k} is defined as:

Here, f:Rd→Δk is a neural network “base classifier” which maps from an input in Rd to a vector of class scores in Δk:={z∈Rk:z≥0,∑kj=1zj=1}

, the probability simplex of non-negative

k-vectors that sum to 1. T is a randomization operation which randomly corrupts inputs in Rd to other inputs in Rd, i.e. for any x, T(x)

is a random variable.

The requirement that f returns outputs in the probability simplex Δk can be satisfied in either of two ways. In the “soft smoothing” formulation (presented in the main paper), f is a neural network which ends in a softmax. In the “hard smoothing” formulation, f returns the indicator vector for a particular class, i.e. a length-k vector with one 1 and the rest zeros, without exposing the intermediate class scores. In the hard smoothing formulation, since the expectation of an indicator function is a probability, the smoothed classifier g(x) can be interpreted as returning the most probable prediction by the classifier f over the random variable T(x). Note that no papers have yet studied soft smoothing as a certified defense, though [salman2019provably] approximated a hard smoothing classifier with the corresponding soft classifier in order to attack it.

When the base classifier f is a neural network, the smoothed classifier g cannot be evaluated exactly, since it is not possible to exactly compute the expectation of a neural network’s prediction over a random input. However, by repeatedly sampling the random vector f(T(x)), one can obtain upper and lower bounds on the expected value of each entry of that vector, which hold with high probability over the sampling procedure. In the hard smoothing case, since each entry of f(T(x))

is a Bernoulli random variable, one can use standard Bernoulli confidence intervals like the Clopper-Pearson, as in

[lecuyer2018certified, cohen2019certified]. In the soft smoothing case, since each entry of f(T(x)) is bounded in [0,1], one can use Hoeffding-style concentration inequalities to derive high-probability confidence intervals for the entries of f(T(x)) .

When T is an additive Gaussian corruption,

the robust classifier g:Rd→[k] is given by:

Gaussian-smoothed classifiers are certifiably robust under the ℓ2 norm: for any input x, if we know ^fσ(x), we can certify that g’s prediction will remain constant within an ℓ2 ball around x:

Theorem 1 (Extension to “soft smoothing” of Theorem 1 from [cohen2019certified]; see also Appendix A in [salman2019provably]).

Theorem 1 is easy to prove using the following mathematical fact:

Intuitively, Lemma 2 says that ^hσ(x+δ) cannot be too much larger or too much smaller than ^hσ(x). If this has the feel of a Lipschitz guarantee, there is good reason: Lemma 2 is equivalent to the statement that the function x↦Φ−1(^hσ(x)) is 1/σ-Lipschitz.

Theorem 1 is a direct consequence of Lemma 2:

Since the outputs of ^fσ live in the probability simplex, for each class j the function ^fσ(⋅)j has output bounded in [0,1], and hence can be viewed as a function ^hσ for which the condition of Lemma 2 applies.

Combining these two results, it follows that a sufficient condition for ^fσ(x+δ)y1≥^fσ(x+δ)j is:

In the adversarial robustness literature, Lemma 2 was originally proved in the special case of hard smoothing by [cohen2019certified], though the result had actually appeared earlier in [li1998some]. Lemma 2 was proved in the general case in [salman2019provably, levine2019certifiably].

Given a dataset, a base classifier architecture, and a smoothing level σ>0, it currently an active research question to figure out the best way to train the base classifier f so that the smoothed classifier g will attain high certified or empirical robust accuracies. The original randomized smoothing paper [lecuyer2018certified] proposed training f with Gaussian data augmentation and the standard cross-entropy loss. However, [salman2019provably] and [li2018second, carmon2019unlabeled] showed that alternative training schemes yield substantial gains in certified accuracy. In particular, [salman2019provably] proposed training f by performing adversarial training on g, and [li2018second, carmon2019unlabeled] proposed training f via stability training [zheng2016improving].

under the name “PixelDP,” though similar techniques had been proposed earlier as a heuristic defenses in

[pinot2019theoretical] gave theoretical and empirical arguments for an adversarial defense similar to randomized smoothing, but did not position their method as a certified defense.

[lee2019stratified] have extended randomized smoothing beyond Gaussian noise / ℓ2 norm by proposing a randomization scheme which allows for certified robustness in the ℓ0 norm.

This appendix details the procedure used to generate the images that appeared in this paper.

As in [santurkar2019image], to generate an image x∗∈Rd near the starting image x0 that is classified by a smoothed neural network ^fσ as some target class t, we use projected steepest descent to solve the optimization problem:

where L is a loss function measuring the extent to which ^fσ classifies x as class t.

The two big choices which need to be made are: which loss function to use, and how to compute its gradient?

The first is the cross-entropy loss. If fadv:Rd→Δk

Δk), the cross-entropy loss is defined as:

The second is the “target class max” (TCM) loss. If we write fadv as fadv(x)=softmax(logits(x)), where logits:Rd→Rk is fadv minus the final softmax layer, then the TCM loss is defined as:

In other words, minimizing LTCM will maximize the score that logits assigns to class t.

Since fadv is just a neural network, computing the gradients of these loss functions can be easily done using automatic differentiation. (The situation is more complicated for smoothed neural networks.)

We note that [santurkar2019image] used LCE in their experiments.

If we decompose f as f(x)=softmax(logits(x)), where logits:Rd→Rk is f minus the softmax layer, then the TCM loss is defined as:

In other words, minimizing LTCM will maximize the expected logit of class t for the random input x+ε

For LTCM, we use the following unbiased gradient estimator:

This estimator is unbiased since

One important question is how many Monte Carlo samples N are needed when computing the gradient of LTCM or LCE. In Figure 14 we show large-ϵ adversarial examples synthesized using N∈{1,5,20,25,50,75} Monte Carlo samples. There does not seem to be a large difference between using N=20 samples or using more than 20. Images synthesized using N=1 samples do appear a bit less developed than the others (e.g. the terrier with N=1 is has fewer ears than when N is large.) In this work, we primarily used N=20.

The following table shows the hyperparameter settings for all of the figures in this paper.