The growing size and complexity of software in embedded systems poses new challenges to the safety assessment of embedded control systems. In industrial practice, the control software is mostly treated as a black box during the system's safety analysis. The appropriate representation of the failure propagation of the software is a pressing need in order to increase the accuracy of safety analyses. However, it also increase the effort for creating and maintaining the safety analysis models (such as fault trees) significantly. In this work, we present a method to automatically generate Component Fault Trees from Continuous Function Charts. This method aims at generating the failure propagation model of the detailed software specification. Hence, control software can be included into safety analyses without additional manual effort required to construct the safety analysis models of the software. Moreover, safety analyses created during early system specification phases can be verified by comparing it with the automatically generated one in the detailed specification phased. 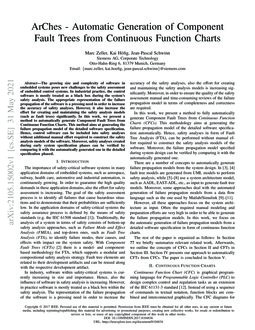 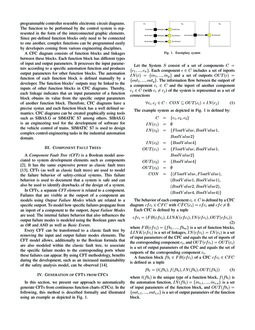 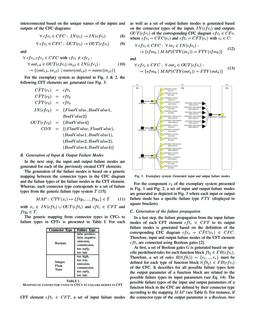 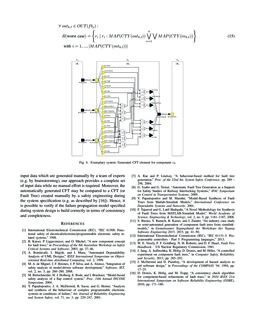 Towards a Cross-Domain Software Safety Assurance Process for Embedded Systems

In this work, we outline a cross-domain assurance process for safety-rel...
Marc Zeller, et al. ∙

Traditionally, fault- or event-tree analyses or FMEAs have been used to ...
Chris Hobbs, et al. ∙

The importance of safety-critical software systems in many application domains of embedded systems, such as aerospace, railway, health care, automotive and industrial automation, is continuously growing. In order to guarantee the high quality demands in these application domains, also the effort for safety assessment is increasing. The goal of the safety assessment process is to identify all failures that cause hazardous situations and to demonstrate that their probabilities are sufficiently low. In the application domains of safety-critical systems the safety assurance process is defined by the means of safety standards (e.g. the IEC 61508 standard

[6]). Traditionally, the analysis of a system in terms of safety consists of bottom-up safety analysis approaches, such as Failure Mode and Effect Analysis (FMEA), and top-down ones, such as Fault Tree Analysis (FTA), to identify failure modes, their causes, and effects with impact on the system safety. With Component Fault Trees (CFTs) [9] there is a model- and component-based methodology for FTA, which supports a modular and compositional safety analysis strategy. Fault tree elements are related to their development artifacts and can be reused along with the respective development artifact.

In this work, we present a method to fully automatically generate Component Fault Trees from Continuous Function Charts (CFCs). This methodology aims at generating the failure propagation model of the detailed software specification automatically. Hence, safety analyses in form of Fault Tree Analysis (FTA), can be performed without manual effort required to construct the safety analysis models of the software. Moreover, the failure propagation model specified during system design can be verified by comparing it with the automatically generated one.

There are a number of concepts to automatically generate failure propagation models from the system design. In [1, 4] fault tree models are generated from UML models to perform safety analysis, while [2, 12, 13, 14] use a system architecture model, such as AADL, EAST-ADL, etc., as input to generate fault tree models. Moreover, some approaches deal with the automated generation of failure propagation models from a data flow language such as the one used by Matlab/Simulink [11, 15, 3].

The rest of the paper is organized as follows: In Section LABEL:sec:relatedwork we briefly summarize relevant related work. Afterwards, we outline the concepts of CFCs in Section II and CFTs in Section III. Section IV presents our approach to automatically CFTs from CFCs. The paper is concluded in Section V.

Continuous Function Chart (CFC) is graphical programming language for Programmable Logic Controller (PLC) to design complex control and regulation tasks as an extension of the IEC 61131-3 standard [7]. Instead of using a sequence of commands in textual notation, function blocks are combined and interconnected graphically. The CFC diagrams for programmable controller resemble electronic circuit diagrams. The function to be performed by the control system is represented in the form of the interconnected graphic elements. Since pre-defined function blocks only need to be connected to one another, complex functions can be programmed easily by developers coming from various engineering disciplines.

A Component Fault Tree (CFT) is a Boolean model associated to system development elements such as components [9]. It has the same expressive power as classic fault trees [16]. CFTs (as well as classic fault trees) are used to model the failure behavior of safety-critical systems. This failure behavior is used to document that a system is safe and can also be used to identify drawbacks of the design of a system.

In CFTs, a separate CFT element is related to a component. Failures that are visible at the outport of a component are models using Output Failure Modes which are related to a specific outport. To model how specific failures propagate from an inport of a component to the outport, Input Failure Modes are used. The internal failure behavior that also influences the output failure modes is modeled using the Boolean gates such as OR and AND as well as Basic Events.

Every CFT can be transformed to a classic fault tree by removing the input and output failure modes elements. The CFT model allows, additionally to the Boolean formula that are also modeled within the classic fault tree, to associate the specific failure modes to the corresponding ports where these failures can appear. By using CFT methodology, benefits during the development, such as an increased maintainability of the safety analysis model, can be observed [8].

Iv Generation of CFTs from CFCs

In this section, we present our approach to automatically generate CFTs from continuous function charts (CFCs). In the following, this method is described formally and illustrated using an example as depicted in Fig. 1.

Let the System S consist of a set of components C={c1,...,cn}. Each component c∈C includes a set of inports IN(c)={in1,...,inp} and a set of outports OUT(c)={out1,...,outq}. The information flow between the outport of a component ci∈C and the inport of another component cj∈C (with ci≠cj) of the system is represented as a set of connections

The example system as depicted in Fig. 1 is defined by:

Each CFC is defined by a tuple

A linkage linkj,i∈LINK(cfci) of a CFC cfci∈CFC is a relation

In our example, the CFC diagram cfc2 of component c2 presented in Fig. 2 is defined by:

In order to specify the semantics of the failure modes within component fault tree an unambiguous failure type fty is assigned to each input and output failure mode. The different failure types as well as the relation between them are specified in a so-called failure type system T [10]:

The generation of a CFT from a CFC diagram is performed in three steps, which are defined as follows:

At first, a CFT element is created for each CFC diagram within a specific project:

For the exemplary system as depicted in Fig. 1 & 2, the following CFT elements are generated (see Fig. 3:

In the next step, the input and output failure modes are generated for each of the previously created CFT elements.

The generic mapping from connector types in CFCs to failure types in CFTs is presented in Table I.

For each CFT element cfti∈CFT, a set of input failure modes as well as a set of output failure modes is generated based on the connector types of the inputs IN(cfci) and outputs OUT(cfci) of the corresponding CFC diagram cfci∈CFc, where cfci=~CFC(ci) and cfti=~CFT(ci) with ci∈C:

Iv-C Generation of the failure propagation

For the function blocks of component c2 in our example as depicted in Fig. 2 the following rules are defined:

Based on these rules, the following Boolean gates are generated for the CFT element cft2 of component c2:

The result of the generation process for the exemplary system is presented in Fig. 4.

Our approach to generate Component Fault Trees (CFTs) from Continuous Function Charts (CFCs) automatically creates a failure propagation model based on thte detailed software specification of the system. No additional manual effort is needed to perform a safety analysis. The resulting CFT can be used for Fault Tree Analyses (FTA) of the overall system including the software as a white box. Thus, the accuracy of the safety analysis is increased without additional effort needed for the construction and maintenance of the safety analysis model for the controller software of the system. Compared to traditionally used methods for the analysis of software such as root cause analysis or fault injection tests, in which the quality of the results is depending on the accuracy of the input data which are generated manually by a team of experts (e.g. by brainstorming), our approach provides a complete set of input data while no manual effort is required. Moreover, the automatically generated CFT may be compared to a CFT (or Fault Tree) created manually by a safety engineering during the system specification (e.g. as described by [5]). Hence, it is possible to verify if the failure propagation model specified during system design is build correctly in terms of consistency and completeness.