We present a neural transition-based parser for spinal trees, a dependency representation of constituent trees. The parser uses Stack-LSTMs that compose constituent nodes with dependency-based derivations. In experiments, we show that this model adapts to different styles of dependency relations, but this choice has little effect for predicting constituent structure, suggesting that LSTMs induce useful states by themselves. 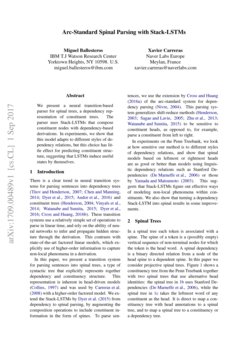 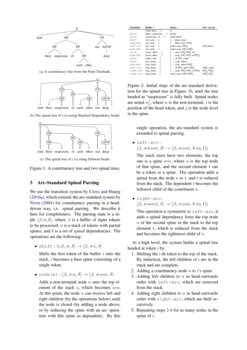 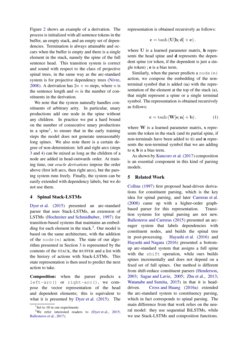 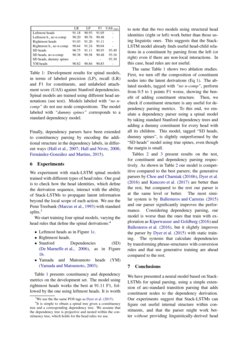 . These transition systems use a relatively simple set of operations to parse in linear time, and rely on the ability of neural networks to infer and propagate hidden structure through the derivation. This contrasts with state-of-the-art factored linear models, which explicitly use of higher-order information to capture non-local phenomena in a derivation.

In this paper, we present a transition system for parsing sentences into spinal trees, a type of syntactic tree that explicitly represents together dependency and constituency structure. This representation is inherent in head-driven models Collins (1997) and was used by Carreras et al. (2008) with a higher-order factored model. We extend the Stack-LSTMs by Dyer et al. (2015) from dependency to spinal parsing, by augmenting the composition operations to include constituent information in the form of spines. To parse sentences, we use the extension by CrossHuang16a of the arc-standard system for dependency parsing Nivre (2004). This parsing system generalizes shift-reduce methods Henderson (2003); Sagae and Lavie (2005); Zhu et al. (2013); Watanabe and Sumita (2015) to be sensitive to constituent heads, as opposed to, for example, parse a constituent from left to right.

In experiments on the Penn Treebank, we look at how sensitive our method is to different styles of dependency relations, and show that spinal models based on leftmost or rightmost heads are as good or better than models using linguistic dependency relations such as Stanford Dependencies De Marneffe et al. (2006) or those by Yamada and Matsumoto (2003). This suggests that Stack-LSTMs figure out effective ways of modeling non-local phenomena within constituents. We also show that turning a dependency Stack-LSTM into spinal results in some improvements.

We use the transition system by Cross and Huang (2016a), which extends the arc-standard system by Nivre (2004) for constituency parsing in a head-driven way, i.e. spinal parsing. We describe it here for completeness. The parsing state is a tuple ⟨β,σ,δ⟩, where β is a buffer of input tokens to be processed; σ is a stack of tokens with partial spines; and δ is a set of spinal dependencies. The operations are the following:

At a high level, the system builds a spinal tree headed at token i by:

Figure 2 shows an example of a derivation. The process is initialized with all sentence tokens in the buffer, an empty stack, and an empty set of dependencies. Termination is always attainable and occurs when the buffer is empty and there is a single element in the stack, namely the spine of the full sentence head. This transition system is correct and sound with respect to the class of projective spinal trees, in the same way as the arc-standard system is for projective dependency trees Nivre (2008). A derivation has 2n+m steps, where n is the sentence length and m is the number of constituents in the derivation.

We note that the system naturally handles constituents of arbitrary arity. In particular, unary productions add one node in the spine without any children. In practice we put a hard bound on the number of consecutive unary productions in a spine111Set to 10 in our experiments, to ensure that in the early training steps the model does not generate unreasonably long spines. We also note there is a certain degree of non-determinism: left and right arcs (steps 3 and 4) can be mixed as long as the children of a node are added in head-outwards order. At training time, our oracle derivations impose the order above (first left arcs, then right arcs), but the parsing system runs freely. Finally, the system can be easily extended with dependency labels, but we do not use them.

Dyer et al. (2015) presented an arc-standard parser that uses Stack-LSTMs, an extension of LSTMs Hochreiter and Schmidhuber (1997) for transition-based systems that maintains an embedding for each element in the stack.222We refer interested readers to Dyer et al. (2015); Ballesteros et al. (2017).. Our model is based on the same architecture, with the addition of the node(n) action. The state of our algorithm presented in Section 3 is represented by the contents of the stack, the buffer and a list with the history of actions with Stack-LSTMs. This state representation is then used to predict the next action to take.

, we compose the vector representation of the head and dependent elements; this is equivalent to what it is presented by

Dyer et al. (2015). The representation is obtained recursively as follows:

As shown by Kuncoro et al. (2017) composition is an essential component in this kind of parsing models.

Collins (1997) first proposed head-driven derivations for constituent parsing, which is the key idea for spinal parsing, and later Carreras et al. (2008) came up with a higher-order graph-based parser for this representation. Transition systems for spinal parsing are not new. Ballesteros and Carreras (2015) presented an arc-eager system that labels dependencies with constituent nodes, and builds the spinal tree in post-processing. Hayashi et al. (2016) and Hayashi and Nagata (2016) presented a bottom-up arc-standard system that assigns a full spine with the shift operation, while ours builds spines incrementally and does not depend on a fixed set of full spines. Our method is different from shift-reduce constituent parsers Henderson (2003); Sagae and Lavie (2005); Zhu et al. (2013); Watanabe and Sumita (2015) in that it is head-driven. Cross and Huang (2016a) extended the arc-standard system to constituency parsing, which in fact corresponds to spinal parsing. The main difference from that work relies on the neural model: they use sequential BiLSTMs, while we use Stack-LSTMs and composition functions. Finally, dependency parsers have been extended to constituency parsing by encoding the additional structure in the dependency labels, in different ways (Hall et al., 2007; Hall and Nivre, 2008; Fernández-González and Martins, 2015).

We experiment with stack-LSTM spinal models trained with different types of head rules. Our goal is to check how the head identities, which define the derivation sequence, interact with the ability of Stack-LSTMs to propagate latent information beyond the local scope of each action. We use the Penn Treebank Marcus et al. (1993) with standard splits.333We use the the same POS tags as Dyer et al. (2015).

Table 1 presents constituency and dependency metrics on the development set. The model using rightmost heads works the best at 91.11 F1, followed by the one using leftmost heads. It is worth to note that the two models using structural head identities (right or left) work better than those using linguistic ones. This suggests that the Stack-LSTM model already finds useful head-child relations in a constituent by parsing from the left (or right) even if there are non-local interactions. In this case, head rules are not useful.

The same Table 1 shows two ablation studies. First, we turn off the composition of constituent nodes into the latent derivations (Eq 1). The ablated models, tagged with “no n-comp”, perform from 0.5 to 1 points F1 worse, showing the benefit of adding constituent structure. Then, we check if constituent structure is any useful for dependency parsing metrics. To this end, we emulate a dependency parser using a spinal model by taking standard Stanford dependency trees and adding a dummy constituent for every head with all its children. This model, tagged “SD heads, dummy spines”, is slightly outperformed by the “SD heads” model using true spines, even though the margin is small.

Tables 2 and 3 present results on the test, for constituent and dependency parsing respectively. As shown in Table 2 our model is competitive compared to the best parsers; the generative parsers by Choe and Charniak (2016b), Dyer et al. (2016) and Kuncoro et al. (2017) are better than the rest, but compared to the rest our parser is at the same level or better. The most similar system is by Ballesteros and Carreras (2015) and our parser significantly improves the performance. Considering dependency parsing, our model is worse than the ones that train with exploration as Kiperwasser and Goldberg (2016) and Ballesteros et al. (2016), but it slightly improves the parser by Dyer et al. (2015) with static training. The systems that calculate dependencies by transforming phrase-structures with conversion rules and that use generative training are ahead compared to the rest.

We have presented a neural model based on Stack-LSTMs for spinal parsing, using a simple extension of arc-standard transition parsing that adds constituent nodes to the dependency derivation. Our experiments suggest that Stack-LSTMs can figure out useful internal structure within constituents, and that the parser might work better without providing linguistically-derived head words. Overall, our spinal neural method is simple, efficient, and very accurate, and might prove useful to model constituent trees with dependency relations.