We study how good a lexicographically maximal solution is in the weighted matching and matroid intersection problems. A solution is lexicographically maximal if it takes as many heaviest elements as possible, and subject to this, it takes as many second heaviest elements as possible, and so on. If the distinct weight values are sufficiently dispersed, e.g., the minimum ratio of two distinct weight values is at least the ground set size, then the lexicographical maximality and the usual weighted optimality are equivalent. We show that the threshold of the ratio for this equivalence to hold is exactly 2. Furthermore, we prove that if the ratio is less than 2, say α, then a lexicographically maximal solution achieves (α/2)-approximation, and this bound is tight. 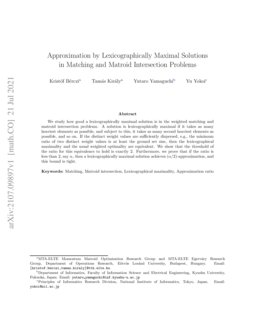 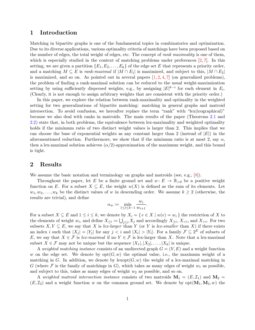 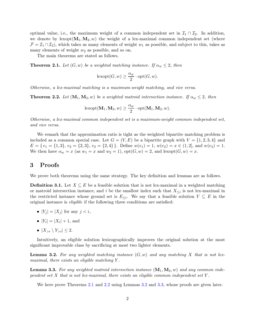 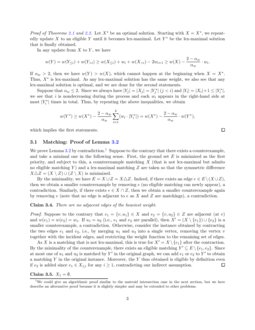 We prove that every connected cubic graph with n vertices has a maximal ...
Wouter Cames van Batenburg, et al. ∙

On maximal isolation sets in the uniform intersection matrix

Let A_k,t be the matrix that represents the adjacency matrix of the inte...
Michal Parnas, et al. ∙

In this paper, we perform theoretical analyses on the behaviour of an ev...
Mojgan Pourhassan, et al. ∙

Matching in bipartite graphs is one of the fundamental topics in combinatorics and optimization. Due to its diverse applications, various optimality criteria of matchings have been proposed based on the number of edges, the total weight of edges, etc. The concept of rank maximality is one of them, which is especially studied in the context of matching problems under preferences [2, 7]. In this setting, we are given a partition {E1,E2,…,Ek} of the edge set E that represents a priority order, and a matching M⊆E is rank-maximal if |M∩E1| is maximized, and subject to this, |M∩E2| is maximized, and so on. As pointed out in several papers [2, 7, 4, 1] (on generalized problems), the problem of finding a rank-maximal solution can be reduced to the usual weight-maximization setting by using sufficiently dispersed weights, e.g., by assigning |E|k−i for each element in Ei. (Clearly, it is not enough to assign arbitrary weights that are consistent with the priority order.)

In this paper, we explore the relation between rank-maximality and optimality in the weighted setting for two generalizations of bipartite matching: matching in general graphs and matroid intersection. To avoid confusion, we hereafter replace the term “rank” with “lex(icographical)” because we also deal with ranks in matroids. The main results of the paper (Theorems 2.1 and 2.2) state that, in both problems, the equivalence between lex-maximality and weighted optimality holds if the minimum ratio of two distinct weight values is larger than 2. This implies that we can choose the base of exponential weights as any constant larger than 2 (instead of |E|) in the aforementioned reduction. Furthermore, we show that if the minimum ratio is at most 2, say α, then a lex-maximal solution achieves (α/2)-approximation of the maximum weight, and this bound is tight.

We assume the basic notation and terminology on graphs and matroids (see, e.g., [8]).

Throughout the paper, let E be a finite ground set and w:E→R>0 be a positive weight function on E. For a subset X⊆E, the weight w(X) is defined as the sum of its elements. Let w1,w2,…,wk be the distinct values of w in descending order. We assume k≥2 (otherwise, the results are trivial), and define

The main theorems are stated as follows.

Let (G,w) be a weighted matching instance. If αw≤2, then

Otherwise, a lex-maximal matching is a maximum-weight matching, and vice versa.

Let (M1,M2,w) be a weighted matroid intersection instance. If αw≤2, then

We prove both theorems using the same strategy. The key definition and lemmas are as follows.

Intuitively, an eligible solution lexicographically improves the original solution at the most significant improvable class by sacrificing at most two lighter elements.

For any weighted matching instance (G,w) and any matching X that is not lex-maximal, there exists an eligible matching Y.

Let X∗ be an optimal solution. Starting with X=X∗, we repeatedly update X to an eligible Y until it becomes lex-maximal. Let Y∗ be the lex-maximal solution that is finally obtained.

In any update from X to Y, we have

Suppose that αw≤2. Since we always have |Yj|=|Xj|=|Y∗j| (j<i) and |Yi|=|Xi|+1≤|Y∗i|, we see that i is nondecreasing during the process and each wi appears in the right-hand side at most |Y∗i| times in total. Thus, by repeating the above inequalities, we obtain

which implies the first statements. ∎

We prove Lemma 3.2 by contradiction.111We could give an algorithmic proof similar to the matroid intersection case in the next section, but we here describe an alternative proof because it is slightly simpler and may be extended to other problems. Suppose to the contrary that there exists a counterexample, and take a minimal one in the following sense. First, the ground set E is minimized as the first priority, and subject to this, a counterexample matching X (that is not lex-maximal but admits no eligible matching Y) and a lex-maximal matching Z are taken so that the symmetric difference X△Z=(X∖Z)∪(Z∖X) is minimized.

By the minimality, we have E=X∪Z=X△Z. Indeed, if there exists an edge e∈E∖(X∪Z), then we obtain a smaller counterexample by removing e (no eligible matching can newly appear), a contradiction. Similarly, if there exists e∈X∩Z, then we obtain a smaller counterexample again by removing e (note that no edge is adjacent to e as X and Z are matchings), a contradiction.

There are no adjacent edges of the heaviest weight.

Suppose to the contrary that e1={v,u1}∈X and e2={v,u2}∈Z are adjacent (at v) and w(e1)=w(e2)=w1. If u1=u2 (i.e., e1 and e2 are parallel), then X′=(X∖{e1})∪{e2} is a smaller counterexample, a contradiction. Otherwise, consider the instance obtained by contracting the two edges e1 and e2, i.e., by merging u1 and u2 into a single vertex, removing the vertex v together with the incident edges, and restricting the weight function to the remaining set of edges.

As X is a matching that is not lex-maximal, this is true for X′=X∖{e1} after the contraction. By the minimality of the counterexample, there exists an eligible matching Y′⊆E∖{e1,e2}. Since at most one of u1 and u2 is matched by Y′ in the original graph, we can add e1 or e2 to Y′ to obtain a matching Y in the original instance. Moreover, the Y thus obtained is eligible by definition even if e2 is added since e1∈X≤i for any i≥1, contradicting our indirect assumption. ∎

Suppose to the contrary that there exists an edge e∈X1. Then, by Claim 3.4, we have w(f)<w(e)=w1 for each adjacent edge f∈Z. Thus, we can obtain a lex-larger matching Z′ from Z by adding e and by removing all the (at most two) adjacent edges, a contradiction. ∎

By Claim 3.5, we have |X1|=0<|Z1|. Let f∈Z be an edge with w(f)=w1. Then, we can obtain an eligible matching Y from X by adding f and by removing all the (at most two) adjacent edges, a contradiction. This concludes the proof of the lemma.

The proof relies on (the correctness of) an augmenting path algorithm for the weighted matroid intersection problem, which was first described in [6]. We first review the basic facts based on [8, Sections 41.2 and 41.3].

Let (M1,M2,w) be a weighted matroid intersection instance. For each matroid Mi (i∈{1,2}), we denote the independent set family, the rank function, and the span function222This is also called the closure function; we follow the terminology of [8] for simplicity. by Ii⊆2E, ri:2E→Z≥0, and spani:2E→2E, respectively. For a set X and elements x∈X and y∉X, we write X∖{x} and X∪{y} as X−x and X+y, respectively.

Let I∈I1∩I2 be a common independent set. The exchangeability graph with respect to I is a directed bipartite graph D=(E∖I,I;A) defined as follows. Let A\coloneqqA1∪A2, where

where elements in S and in T are called sources and sinks, respectively. Note that A1 and S depend only on M1, and A2 and T depend only on M2. Let c:E→R be a cost function on the vertex set defined as follows:

For a nonnegative integer ℓ, a common independent set I∈I1∩I2 is said to be ℓ-extreme if w(I) is maximized subject to I∈I1∩I2 and |I|=ℓ. The following lemma leads to a simple augmenting path algorithm for the weighted matroid intersection problem. The key is that one can augment any ℓ-extreme solution to some (ℓ+1)-extreme solution (if exists) by simply exchanging elements along a path.

Now we start the proof of Lemma 3.3. Let X∈I1∩I2 be a common independent set that is not lex-maximal, and let i be the smallest index such that X≤i is not lex-maximal in the restricted instance whose ground set is E≤i.

Let ℓ\coloneqq|X≤i|. Then, X≤i is ℓ-extreme in the restricted instance (M1|E≤i,M2|E≤i,w′), which has a larger common independent set. By Lemma 3.6, one can obtain an (ℓ+1)-extreme common independent set Y′⊆E≤i by flipping X≤i along a source-sink path P in the exchangeability graph. Note that |Y′j|=|Xj| for any j<i and |Y′i|=|Xi|+1 by the choice of i and the definition of w′.

If P consists of a single vertex (which is a source and a sink), then the claim immediately follows since Y′=X≤i+y for some element y∈Ei. Otherwise, let s and t be the first and last vertices of P, respectively. By the definitions of the exchangeability graph and the sources and sinks, y∈span1(X≤i)⊆span1(X≤i+s) for every y∈P−s and y∈span2(X≤i)⊆span2(X≤i+t) for every y∈P−t (recall that any y∈P−s is not a source and any y∈P−t is not a sink). Hence, we have span1(X≤i∪P)=span1(X≤i+s) and span2(X≤i∪P)=span2(X≤i+t), and then

which implies that the equality holds everywhere. Thus we have span1(Y′)=span1(X≤i+s)⊇span1(X≤i) and span2(Y′)=span2(X≤i+t)⊇span2(X≤i), which completes the proof. ∎

In this paper, we have analyzed how good a lex-maximal solution is in the weighted matching and matroid intersection problems based on how dispersed the distinct weight values are. It is well-known that, subject to a single matroid, a lex-maximal solution is always optimal, which can be found by a greedy algorithm. For more general independence systems, Jenkyns [3] and Korte and Hausmann [5] independently analyzed the worst-case approximation ratio of a greedy algorithm. In particular, the worst ratio is 2 in the weighted matching and matroid intersection problems, while a lex-maximal solution (which is a possible output of a greedy algorithm) always achieves the maximum weight if the distinct weight values are sufficiently dispersed. From this perspective, we have filled the gap between these two situations.

A natural question is as follows: how about a further (common) generalization, e.g., the weighted matroid parity problem? We just remark that it seems difficult to extend our algorithmic proof straightforwardly bacause no counterpart of augmentation from any ℓ-extreme solution to some (ℓ+1)-extreme solution along a path (Lemma 3.6) is known. A minimal counterexample proof (like the matching case) also seems nontrivial; in particular, we have found no counterpart of Claim 3.4.

We are grateful to Naoyuki Kamiyama for giving comments on a literature on rank-maximal matchings.