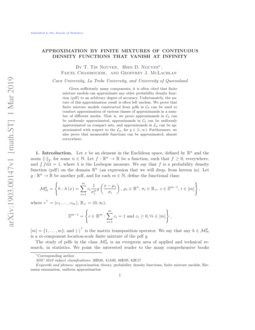 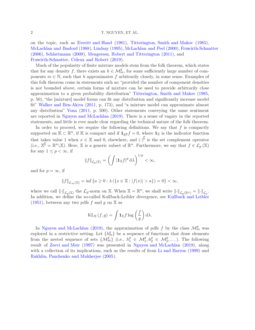 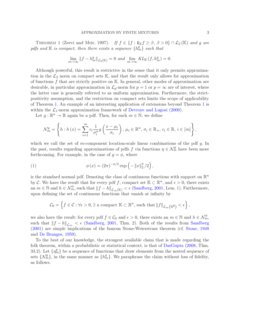 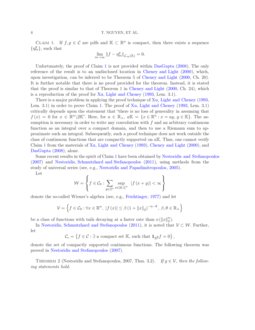 The class of location-scale finite mixtures is of enduring interest both...
TrungTin Nguyen, et al. ∙

A Universal Approximation Theorem for Mixture of Experts Models

We prove that the density function of the gradient of a sufficiently smo...
Karthik S. Gurumoorthy, et al. ∙

Let x be an element in the Euclidean space, defined by Rn and the norm ∥⋅∥2, for some n∈N. Let f:Rn→R be a function, such that f≥0, everywhere, and ∫fdλ=1, where λ is the Lesbegue measure. We say that f is a probability density function (pdf) on the domain Rn (an expression that we will drop, from hereon in). Let g:Rn→R be another pdf, and for each m∈N, define the functional class:

[m]={1,…,m}, and (⋅)⊤ is the matrix transposition operator. We say that any h∈Mgm is a m-component location-scale finite mixture of the pdf g.

The study of pdfs in the class Mgm is an evergreen area of applied and technical research, in statistics. We point the interested reader to the many comprehensive books on the topic, such as Everitt and Hand (1981), Titterington, Smith and Makov (1985), McLachlan and Basford (1988), Lindsay (1995), McLachlan and Peel (2000), Fruwirth-Schnatter (2006), Schlattmann (2009), Mengersen, Robert and Titterington (2011), and Fruwirth-Schnatter, Celeux and Robert (2019).

Much of the popularity of finite mixture models stem from the folk theorem, which states that for any density f, there exists an h∈Mgm, for some sufficiently large number of components m∈N, such that h approximates f

arbitrarily closely, in some sense. Examples of this folk theorem come in statements such as: “provided the number of component densities is not bounded above, certain forms of mixture can be used to provide arbitrarily close approximation to a given probability distribution”

Titterington, Smith and Makov (1985, p. 50), “the [mixture] model forms can fit any distribution and significantly increase model fit” Walker and Ben-Akiva (2011, p. 173), and “a mixture model can approximate almost any distribution” Yona (2011, p. 500). Other statements conveying the same sentiment are reported in Nguyen and McLachlan (2019). There is a sense of vagary in the reported statements, and little is ever made clear regarding the technical nature of the folk theorem.

In order to proceed, we require the following definitions. We say that f is compactly supported on K⊂Rn, if K is compact and if 1K∁f=0, where 1X is the indicator function that takes value 1 when x∈X and 0, elsewhere, and (⋅)∁ is the set complement operator (i.e., X∁=Rn∖X). Here, X is a generic subset of Rn. Furthermore, we say that f∈Lp(X) for any 1≤p<∞, if

. In addition, we define the so-called Kullback-Leibler divergence, see

In Nguyen and McLachlan (2019), the approximation of pdfs f by the class Mgm was explored in a restrictive setting. Let {hgm} be a sequence of functions that draw elements from the nested sequence of sets {Mgm} (i.e., hg1∈Mg1,hg2∈Mg2,…). The following result of Zeevi and Meir (1997) was presented in Nguyen and McLachlan (2019), along with a collection of its implications, such as the results of from Li and Barron (1999) and Rakhlin, Panchenko and Mukherjee (2005).

Although powerful, this result is restrictive in the sense that it only permits approximation in the L2 norm on compact sets K, and that the result only allows for approximation of functions f that are strictly positive on K. In general, other modes of approximation are desirable, in particular approximation in Lp-norm for p=1 or p=∞ are of interest, where the latter case is generally referred to as uniform approximation. Furthermore, the strict-positivity assumption, and the restriction on compact sets limits the scope of applicability of Theorem 1. An example of an interesting application of extensions beyond Theorem 1 is within the L1-norm approximation framework of Devroye and Lugosi (2000).

which we call the set of m-component location-scale linear combinations of the pdf g. In the past, results regarding approximations of pdfs f via functions η∈Ngm have been more forthcoming. For example, in the case of g=ϕ, where

is the standard normal pdf. Denoting the class of continuous functions with support on Rn by C. We have the result that for every pdf f, compact set K⊂Rn, and ϵ>0, there exists an m∈N and h∈Nϕm, such that ∥f−h∥L∞(K)<ϵ (Sandberg, 2001, Lem. 1). Furthermore, upon defining the set of continuous functions that vanish at infinity by

To the best of our knowledge, the strongest available claim that is made regarding the folk theorem, within a probabilistic or statistical context, is that of DasGupta (2008, Thm. 33.2). Let {ηgm} be a sequence of functions that draw elements from the nested sequence of sets {Ngm}, in the same manner as {hgm}. We paraphrase the claim without loss of fidelity, as follows.

If f,g∈C are pdfs and K⊂Rn is compact, then there exists a sequence {ηgm}, such that

There is a major problem in applying the proof technique of Xu, Light and Cheney (1993, Lem. 3.1) in order to prove Claim 1. The proof of Xu, Light and Cheney (1993, Lem. 3.1) critically depends upon the statement that “there is no loss of generality in assuming that f(x)=0 for x∈Rn∖2K”. Here, for a∈R+, aK={x∈Rn:x=ay, y∈K}. The assumption is necessary in order to write any convolution with f and an arbitrary continuous function as an integral over a compact domain, and then to use a Riemann sum to approximate such an integral. Subsequently, such a proof technique does not work outside the class of continuous functions that are compactly supported on aK. Thus, one cannot verify Claim 1 from the materials of Xu, Light and Cheney (1993), Cheney and Light (2000), and DasGupta (2008), alone.

be a class of functions with tails decaying at a faster rate than o(∥x∥n2).

denote the set of compactly supported continuous functions. The following theorem was proved in Nestoridis and Stefanopoulos (2007).

If g∈V, then the following statements hold.

If g∈W, then the following statements are true.

Utilizing the techniques from Nestoridis and Stefanopoulos (2007), Bacharoglou (2010) proved a similar set of results to Theorem 2, under the restriction that f is a non-negative function with support R, using g=ϕ (i.e. g has form (1), where n=1) and taking {hϕm} as the approximating sequence, instead of {ηgm}. That is, the following result is obtained.

If f:R→R+∪{0}, then the following statements are true.

To the best of our knowledge, Theorem 4

Mgm for any g except the normal pdf ϕ. Although ϕ is traditionally the most common choice for g in practice, the modern mixture model literature has seen the use of many more exotic component pdfs, such as the student-t

pdf and its skew and modified variants (see, e.g.,

Peel and McLachlan, 2000, Forbes and Wraith, 2013, and Lee and McLachlan, 2016). Thus, its use is somewhat limited in the modern context. Furthermore, modern applications tend to call for n>1, further restricting the impact of the result as a theoretical bulwark for finite mixture modeling in practice. A remark in Bacharoglou (2010) states that the result can generalized to the case where g∈V instead of g=ϕ. However, no suggestions were proposed, regarding the generalization of Theorem 4 to the case of n>1.

In this article, we prove a novel set of results that largely generalize Theorem 4. Using techniques inspired by Donahue et al. (1997) and Cheney and Light (2000), we are able to obtain a set of results regarding the approximation capability of the class of m-component mixture models Mgm, when g∈C0 or g∈V, and for any n∈N. By definition of V, the majority of our results extend beyond the proposed possible generalizations of Theorem 4. The remainder of the article is devoted to proving the following theorem.

If we assume that f and g are pdfs and that g∈C0, then the following statements are true.

If we assume instead that g∈V, then the following statement is also true.

The article proceeds as follows. The separate parts of Theorem 5 are proved in the subsections of Section 2. Comments and discussion are provided in Section 3. Necessary technical lemmas and results are also included, for reference, in Appendix A.

Before we begin to present the main theorem, we establish some technical results regarding our class of component densities C0. Let f,g∈L1 and denote the convolution of f and g by f⋆g=g⋆f. Further, we denote the sequence of dilates of g by {gk:gk(x)=kng(kx),k∈N}. The following result is an alternative to Lemma 5 and Corollary 1. Here, we replace a boundedness assumption on the approximand, in the aforementioned theorem by a vanishing at infinity assumption, instead.

Since g is a pdf, we have

and on the other hand

denote the modulus of continuity of f. Furthermore, define the diameter of a set X⊂Rn by diam(X)=supx,y∈X∥x−y∥2 and denote an open ball, centered at x∈Rn with radius r>0 by B(x,r)={y∈Rn:∥x−y∥2<r}.

Notice that the class Mgm can be parameterized as

where ki=1/σi and zi=μi/σi. The following result is the primary mechanism that permits us to construct finite mixture approximations for convolutions of form gk⋆f. The argument motivated by the approaches taken in Theorem 1 in Cheney and Light (2000, Ch. 24), Nestoridis and Stefanopoulos (2007, Lem. 3.1), and Nestoridis, Schmutzhard and Stefanopoulos (2011, Thm. 3.1).

It suffices to show that for any k∈N and ϵ>0, there exists a sufficiently large enough m(ϵ)∈N so that for all m≥m(ϵ),hgm∈Mgm such that

For any k∈N, we can write

For convenience, let Πδm={Aδi:i∈[m−1]} denote the disjoint covering, or partition, of kK. We seek to show that there exists an m∈N and Πδm, such that

Thus, 0≤cm≤1, and our construction implies that hgm∈Mgm, where

We can bound the left-hand side of (4) as follows:

To conclude the proof, it suffices to choose an appropriate sequence of partitions Πδ(ϵ)m,m≥m(ϵ), for some large but finite m(ϵ), so that (2.1) and (6) hold, which is possible by Lemma 8. ∎

point-wise. We obtain our conclusion via the Lesbegue dominated convergence theorem. ∎

We now proceed to prove each of the parts of Theorem 5. To prove Theorem 5(a) it suffices to show that for every ϵ>0, there exists a hgm∈Mgm, such that ∥∥f−hgm∥∥L∞<ϵ.

The goal is to find a hgm, such that ∥∥h−hgm∥∥L∞<ϵ/2. Since h∈Cc, we may find a compact K⊂Rn such that ∥h∥L∞(K∁)=0. Apply Lemma 1 to show the existence of a k(ϵ), such that

for all k≥k(ϵ). With a fixed k=k(ϵ), apply Lemma 3 to show that there exists a hgm∈Mgm, such that

By the triangle inequality, we have

The proof is complete by substitution of (8) into (7).

For any ϵ>0 and compact K⊂Rn, it suffices to show that there exists a sufficiently large enough m(ϵ)∈N so that for all m≥m(ϵ),hgm∈Mgm, such that ∥∥f−hgm∥∥L∞(K)<ϵ.