In this paper we are dealing with the issue of finding possibly short synchronizing words in automata with weight assigned to each letter in the alphabet Σ. First we discuss some complexity problems, and then we present new approximation algorithm in four variations. 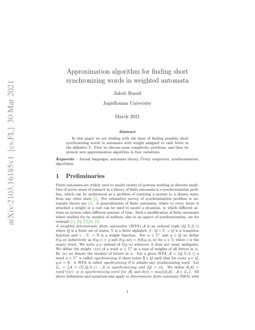 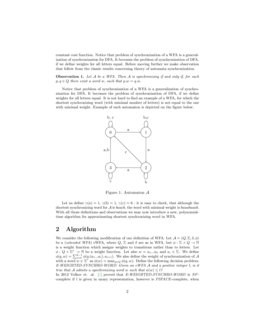 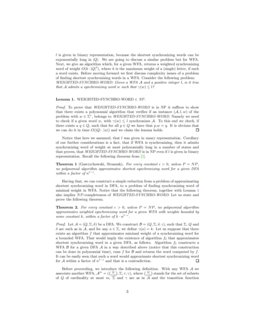 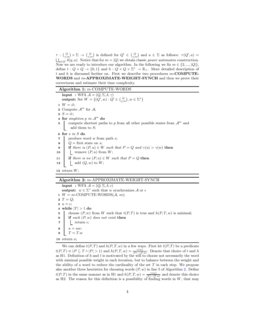 Finite automata are widely used to model variety of systems working in discrete mode. One of active areas of research in a theory of finite automata is a synchronization problem, which can be understood as a problem of resetting a system to a chosen state, from any other state [4]. For exhaustive survey of synchronization problem in automata theory see [2]. A generalization of finite automata, where to every letter is attached a weight or a cost can be used to model a situation, in which different actions on system takes different amount of time. Such a modification of finite automata where studied for by number of authors, also in an aspect of synchronization, see for example [1], [6], [7],[8], [9]. A weighted deterministic finite automaton (WFA) A is an ordered tuple (Q,Σ,δ,γ) where Q is a finite set of states, Σ is a finite alphabet, δ:Q×Σ→Q is a transition function and γ:Σ→N is a weight function. For \emphw∈Σ∗ and \emphq∈Q we define δ(\emphq,\emphw) inductively as δ(\emphq,ϵ)=q and δ(\emphq,\emphaw)=δ(δ(\emphq,\empha),\emphw) for a∈Σ where ϵ is the empty word. We write q.w instead of δ(q,w) wherever it does not cause ambiguity. We define the weight γ(w) of a word w∈Σ∗ as a sum of weights of all letters in w. By |w| we denote the number of letters in w. For a given WFA A=(Q,Σ,δ,γ) a word \emphw∈Σ∗ is called synchronizing if there exists ¯¯¯q∈Q such that for every \emphq∈Q, q.w=¯¯¯q. A WFA is called synchronizing if it admits any synchronizing word. Let Ln={A=(Σ,Q,δ,γ):Aissynchronizingand|Q|=n}. We define d(A)=min{γ(w):wissynchronizingwordforA} and d(n)=max{d(A):A∈Ln}. All above definitions and notations also apply to deterministic finite automata (DFA) with constant cost function. Notice that problem of synchronization of a WFA is a generalization of synchronization for DFA. It becomes the problem of synchronization of DFA, if we define weights for all letters equal. Before moving further we make observation that follow from the classic results concerning theory of automata synchronization.

Let A be a WFA. Then A is synchronizing if and only if, for each p,q∈Q there exist a word w, such that p.w=q.w.

To prove that WEIGHTED-SYNCHRO-WORD is in NP it suffices to show that there exists a polynomial algorithm that verifies if an instance (A,l,w) of the problem with w∈Σ∗, belongs to WEIGHTED-SYNCHRO-WORD. Namely we need to check if a given word w, with γ(w)≤l synchronizes A. To this end we check, if there exists a q∈Q, such that for all p∈Q we have that p.w=q. It is obvious that we can do it in time O(|Q|⋅|w|) and we claim the lemma holds. ∎

Notice that here we assumed, that l was given in unary representation. Corollary of our further considerations is a fact, that if WFA is synchronizing, then it admits synchronizing word of weight at most polynomially long in a number of states and that proves, that WEIGHTED-SYNCHRO-WORD is in NP even if l is given in binary representation. Recall the following theorem from [3].

For every constant ϵ>0, unless P=NP, no polynomial algorithm approximates shortest synchronizing word for a given DFA within a factor of n1−ϵ.

For every constant ϵ>0, unless P=NP, no polynomial algorithm approximates weighted synchronizing word for a given WFA with weights bounded by some constant k, within a factor of k⋅n1−ϵ.

Let A=(Q,Σ,δ) be a DFA. We construct B=(Q,Σ,δ,γ), such that Σ, Q and δ are such as in A, and for any a∈Σ, we define γ(a)=k. Let us suppose that there exists an algorithm f that approximates minimal weight of a synchronizing word for a bounded WFA. That would imply the existence of algorithm f2 that approximates shortest synchronizing word in a given DFA, as follows. Algorithm f2 constructs a WFA B for a given DFA A in a way described above (notice that this construction can be done in polynomial time), runs f for B and returns the word computed by f. It can be easily seen that such a word would approximate shortest synchronizing word for A within a factor of n1−ϵ and that is a contradiction. ∎

Before proceeding, we introduce the following definition. With any WFA A we associate another WFA, Am=((Q≤m),Σ,τ,γ), where (Q≤m) stands for the set of subsets of Q of cardinality at most m, Σ and γ are as in A and the transition function τ:(Q≤m)×Σ→(Q≤m) is defined for Q′∈(Q≤m) and a∈Σ as follows: τ(Q′,a)=⋃q∈Q′δ(q,a). Notice that for m=|Q| we obtain classic power automaton construction. Now we are ready to introduce our algorithm. In the following we fix m∈{2,...,|Q|}, define t:Q×Q→{0,1} and h:Q×Q×Σ∗→R+. More detailed description of t and h is discussed further on. First we describe two procedures m-COMPUTE-WORDS and m-APPROXIMATE-WEIGHT-SYNCH

and then we prove their correctness and estimate their time complexity.

We can define t(P,T) and h(P,T,w) in a few ways. First let t(P,T) be a predicate t(P,T)≡(P⊆T∧|P|>1) and h(P,T,w)=γ(w)|P|−|P.w|. Denote that choice of t and h as H1. Definition of h and t is motivated by the will to choose not necessarily the word with minimal possible weight in each iteration, but to balance between the weight and the ability of a word to reduce the cardinality of the set T

in each step. We propose also another three heuristics for choosing words

(P,w) in line 5 of Algorithm 2. Define t(P,T) in the same manner as in H1 and h(P,T,w)=γ(w)|T|−|T.w| and denote this choice as H2. The reason for this definition is a possibility of finding words in W, that may not be the shortest ones, but reduce more states in T and therefore are a good choice. Next heuristic we propose is as follows: define t(P,T)≡(P⊆T∧|P|=min(m,|T|)) and h(P,T,w)=γ(w) and denote this choice as H3. Here we model a greedy approach, known from the classic Eppstein’s heuristic algorithm for finding synchronizing words for a given DFA [5]. The last variant, denoted as H4, is a modification of H2 above where we let t(P,T) be as in H2 and H1 and h(P,T,w)=γ(w)(|T|−|T.w|)2. Here we suppose that the ability of a word to send many states into one is more important than the weight γ(w). It is likely, that using H1, H2 or H3, the Algorithm 2 will take a∈Σ in first iteration, which can be not an optimal choice in numerous situations, for example Černý automata [4]. Using H4 we want to prevent this situation, by taking square in a denominator. For the sake of next proofs we define k=max{γ(a):a∈Σ}.

For each element (P,w)∈W returned by m-COMPUTE-WORDS procedure we have |P.w|=1 and w is a word with minimal weight having that property.

Consider procedure m-COMPUTE-WORDS. In a for loop in line 4 we compute paths to all singletons in Am from all possible other states using the Dijkstra algorithm. After that loop every element in S consists of a sequence of vertices from some state to a singleton. It is obvious that any such path corresponds to a word w, such that |P.w|=1, where P is the first element of that path. Minimality of γ(w) is immediate from the fact that S contains paths with minimal weight and that concludes the proof. ∎

If A is synchronizing then for each P⊂Q, such that |P|≤m, there is exactly one element of W having P as the first coordinate.

Using similar argument as in the proof of Lemma 3, we can easily prove that there exists at least one such element in W. To prove that there is at most one such element, consider the if statement in line 9. It is obvious that after execution of that if, there can be at most one element with P as the first coordinate in W and that ends the proof. ∎

We first consider the procedure m-COMPUTE-WORDS. Computing Am can be done in time O(|Σ|⋅|Q|m+1). Notice that there are exactly |Q| singletons in Am, so the loop in line 4 is executed exactly |Q| times. It is easy to see that the set of vertices of the underlying digraph of that automaton is of size O(|Q|m) and the edge set size is O(|Σ|⋅|Q|m). If we use Dijkstra algorithm to compute shortest paths, we obtain time complexity of the for loop in line 4 is O(|Q|⋅|Σ|⋅|Q|mlog|Q|m)=O(|Σ|⋅|Q|m+1⋅mlog|Q|)=O(|Σ|⋅|Q|m+1log|Q|). Now consider the for loop in line 6. We can implement Dijkstra algorithm to obtain words instead of paths, so line 7 does not affect the time complexity. Lines 9–12 can be executed in expected constant time using a dictionary, so the time complexity of the loop is O(|S|)=O(|Q|m+1). Joining it all together we obtain that the time complexity of m-COMPUTE-WORDS procedure is O(|Σ|⋅|Q|m+1log|Q|). Now we estimate time complexity of m-APPROXIMATE-WEIGHT-SYNC. COMPUTE-WORDS is executed once, and lines 2 and 3 have constant complexity. Consider the while loop. Notice, that at the end of the while block we have either |T.w|<|T| or we return ϵ, so this loop is executed at most |Q|−1 times. From earlier considerations and from Lemma 4 we obtain that the size of W is O(|Q|m), so choosing proper (P,w) takes at most O(|Q|m) time. Lines 6, 7 and 8 are executed in constant time. Since |T|≤|Q| and |w|≤(m−1)(|Q|2), we can compute T.w in O(|Q|3). From all that we have that m-APPROXIMATE-WEIGHTED-SYNC works in time O(|Σ|⋅|Q|m+1log|Q|+|Q|m+3) and that concludes this theorem. ∎

Another remark is that even for m=2 we obtain a weighted synchronizing word of weight O(k˙|Q|3). If we choose greater m, we can shorten the intermediate words w but at a cost of higher time complexity. We also provide an example of an automaton B (depicted below) that illustrates the difference between different heuristics. We define γ(a)=1,γ(b)=6,γ(c)=2,γ(d)=7. Results of WEIGHTED-SYNCHRO-WORD for different values of m and different heuristics are presented in a Table 1. They were obtained using author’s implementation of described algorithm, which can be found under this link https://colab.research.google.com/drive/14MmedWbN83KB-_t-rhaZwpexBaNBfQAa?usp=sharing.

The shortest synchronizing word for automaton B is dadadadadadabdcadad (19 letters, weight 79) and the word with minimal weight is bcaaaaaadadadadadbcadad (23 letters, weight 77). From the results in Table 1 we can deduce, that not always choosing higher m does the job. Also, in this particular example heuristics H4 works the best for almost all values of m we chose, except for m=5, for which H3 is the best choice.