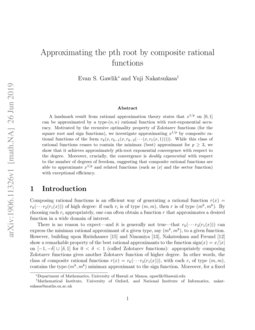 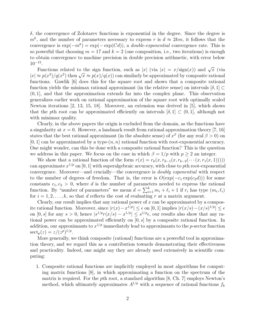 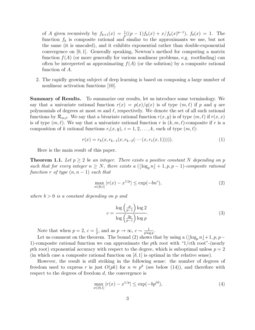 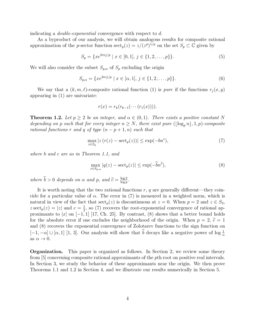 There is no reason to expect—and it is generally not true—that rk(⋯r2(r1(x))) can express the minimax rational approximant of a given type, say (mk,mk), to a given function. However, building upon Rutishauser [15] and Ninomiya [13], Nakatsukasa and Freund [12] show a remarkable property of the best rational approximants to the function sign(x)=x/|x| on [−1,−δ]∪[δ,1] for 0<δ<1 (called Zolotarev functions): appropriately composing Zolotarev functions gives another Zolotarev function of higher degree. In other words, the class of composite rational functions r(x)=rk(⋯r2(r1(x))), with each ri of type (m,m), contains the type-(mk,mk) minimax approximant to the sign function. Moreover, for a fixed δ, the convergence of Zolotarev functions is exponential in the degree. Since the degree is mk, and the number of parameters necessary to express r is d≈2km, it follows that the convergence is exp(−mk)=exp(−exp(Cd)), a double-exponential convergence rate. This is so powerful that choosing m=17 and k=2 (one composition, i.e., two iterations) is enough to obtain convergence to machine precision in double precision arithmetic, with error below 10−15.

Functions related to the sign function, such as |x| (via |x|=x/sign(x)) and √x (via |x|≈p(x2)/q(x2) then √x≈p(x)/q(x)) can similarly be approximated by composite rational functions. Gawlik [6] does this for the square root and shows that a composite rational function yields the minimax rational approximant (in the relative sense) on intervals [δ,1]⊂(0,1], and that the approximation extends far into the complex plane. This observation generalizes earlier work on rational approximation of the square root with optimally scaled Newton iterations [2, 13, 15, 18]. Moreover, an extension was derived in [5], which shows that the pth root can be approximated efficiently on intervals [δ,1]⊂(0,1], although not with minimax quality.

Clearly, in the above papers the origin is excluded from the domain, as the functions have a singularity at x=0. However, a landmark result from rational approximation theory [7, 16] states that the best rational approximant (in the absolute sense) of xβ (for any real β>0) on [0,1] can be approximated by a type-(n,n) rational function with root-exponential accuracy. One might wonder, can this be done with a composite rational function? This is the question we address in this paper. We focus on the case in which β=1/p with p≥2 an integer.

We show that a rational function of the form r(x)=rk(x,rk−1(x,rk−2(⋯(x,r1(x,1))))) can approximate x1/p on [0,1] with superalgebraic accuracy, with close to pth root-exponential convergence. Moreover—and crucially—the convergence is doubly exponential with respect to the number of degrees of freedom. That is, the error is O(exp(−c1exp(c2d))) for some constants c1,c2>0, where d is the number of parameters needed to express the rational function. By “number of parameters” we mean d=∑ki=1mi+ℓi+1 if ri has type (mi,ℓi) for i=1,2,…,k, so that d reflects the cost of evaluating r at a matrix argument.

Clearly, our result implies that any rational power of x can be approximated by a composite rational function. Moreover, since |r(x)−x1/p|≤ϵ on [0,1] implies |r(x/s)−(x/s)1/p|≤ϵ on [0,s] for any s>0, hence |s1/pr(x/s)−x1/p|≤s1/pϵ, our results also show that any rational power can be approximated efficiently on [0,s] by a composite rational function. In addition, our approximants to x1/p immediately lead to approximants to the p-sector function sectp(z)=z/(zp)1/p.

More generally, we think composite (rational) functions are a powerful tool in approximation theory, and we regard this as a contribution towards demonstrating their effectiveness and practicality. Indeed, one might say they are already used extensively in scientific computing:

Here is the main result of this paper.

Let p≥2 be an integer. There exists a positive constant N depending on p such that for every integer n≥N, there exists a (⌊logpn⌋+1,p,p−1)-composite rational function r of type (n,n−1) such that

where b>0 is a constant depending on p and

Let us comment on the theorem. The bound (2) shows that by using a (⌊logpn⌋+1,p,p−1)-composite rational function we can approximate the pth root with “1/cth root”-(nearly pth root) exponential accuracy with respect to the degree, which is suboptimal unless p=2 (in which case a composite rational function on [δ,1] is optimal in the relative sense).

indicating a double-exponential convergence with respect to d.

As a byproduct of our analysis, we will obtain analogous results for composite rational approximation of the p-sector function sectp(z)=z/(zp)1/p on the set Sp⊂C given by

We will also consider the subset Sp,α of Sp excluding the origin

We say that a (k,m,ℓ)-composite rational function (1) is pure if the functions rj(x,y) appearing in (1) are univariate:

Let p≥2 be an integer, and α∈(0,1). There exists a positive constant N depending on p such that for every integer n≥N, there exist pure (⌊logpn⌋,1,p)-composite rational functions r and q of type (n−p+1,n) such that

It is worth noting that the two rational functions r, q are generally different—they coincide for a particular value of α. The error in (7) is measured in a weighted norm, which is natural in view of the fact that sectp(z) is discontinuous at z=0. When p=2 and z∈S2, zsectp(z)=|z| and c=12, so (7) recovers the root-exponential convergence of rational approximants to |x| on [−1,1] [17, Ch. 25]. By contrast, (8) shows that a better bound holds for the absolute error if one excludes the neighborhood of the origin. When p=2, ˆc=1 and (8) recovers the exponential convergence of Zolotarev functions to the sign function on [−1,−α]∪[α,1] [1, 3]. Our analysis will show that ˆb decays like a negative power of log1α as α→0.

This paper is organized as follows. In Section 2, we review some theory from [5] concerning composite rational approximants of the pth root on positive real intervals. In Section 3, we study the behavior of these approximants near the origin. We then prove Theorems 1.1 and 1.2 in Section 4, and we illustrate our results numerically in Section 5.

Gawlik shows that fk(x) is a rapidly convergent approximant to the pth root on [αp,1]. With k recursions, the maximum relative error |fk(x)−x1/p|/|x1/p| on [αp,1] decays double exponentially in k: it is bounded above by c1exp(−c2(m+ℓ+1)k) for some c1,c2>0 depending on m, ℓ, p, and α. Importantly, these constants depend very weakly on α; the analysis below will implicitly show that when (m,ℓ)=(1,0), c1 is independent of α and c2 decays like a negative power of log1α as α→0, just like ˆb in (8).

Given that (9) is an approximant on [αp,1], which is an interval that excludes the singularity at x=0, a natural question arises: can we approximate on [0,1]? Intuitively, the function is still continuous at x=0 (unlike e.g. the sign or sector function) with 01/p=0, and hence it is possible to approximate x1/p on the whole interval [0,1]. Indeed Stahl [16] shows that x1/p on [0,1] can be approximated by a type-(n,n) rational function with root-exponential accuracy (we refer to [4, 14] for general results on classical rational approximation theory). Can a highly efficient rational approximant be constructed based on recursion as in (9)? It is important to note that we will necessarily switch to the (more natural) metric of absolute error |r(x)−x1/p| rather than the relative error |r(x)−x1/p|/|x1/p| for this purpose.

for each j. It follows from this observation and an inductive argument that fk has type (pk−1,pk−1−1) for each k≥1.

We rely heavily on this explicit expression for the particular case (m,ℓ)=(1,0), as it lets us analyze the functions in detail, which leads to a constructive proof for Theorem 1.1. We note that using larger values of (m,ℓ) may result in faster convergence, in particular a larger exponent c than (3). In view of (4), the convergence is still doubly exponential, with an improved constant ~c. However, we do not expect the improvement would be significant.

In this section, we analyze the absolute error committed by the function fk defined by (13)–(14) on the interval [0,αp]. It will be convenient to consider not fk but the scaled function

which has the property that [5, Theorem 2]

We will prove the following estimate.

Experiments suggest that the bound (17) could be improved to <α for k large enough, but this does not affect what follows in any significant way.

We will prove Theorem 3.1 by a series of lemmas. Let

where the prime denotes differentiation with respect to x.

A short calculation shows that

Since g0(x)=x and α0=α, the above inequalities hold when k=0. Assume that they hold for some k≥0. Observe that

We first note that fk is positive and nondecreasing on [0,αp]. Indeed, differentiating the relation

By the lemma above,

This completes the proof of Theorem 3.1.

We note that the function gk in (18) approximates the p-sector function sectp(z)=z/(zp)1/p (this observation appeared in [5, Sec. 4]), and gk is a pure composite rational function of the form gk(z)=rk(rk−1(⋯r2(r1(z)))). In fact it is (k,1,p)-composite, and an inductive argument shows that it has type (pk−p+1,pk). In the p=2 case, this reduces to Zolotarev’s best rational approximant to the sign function of type (2k−1,2k). That is, as in the square root approximation, the minimax rational approximant is contained in the class of (here purely) composite rational functions.

Below we derive estimates for the maximum weighted error |z(gk(z)−sectp(z))| on the sets Sp,Sp,α⊂C defined in (5) and (6). As before, it will be convenient to work not with gk(z) but with the rescaled function

To determine k, we select a constant α∗∈(1/e,1) (depending on p) and split the convergence of αk→1 into three stages:

Clearly, the second stage is independent of ϵ and α0, so k2 is a constant (depending on p).

Our choice of α∗ is described in the following lemma.

There exists a constant α∗∈(0,1) depending on p such that

It is proven in [5, Theorem 2] that the iteration (10) generates an increasing sequence {αk}∞k=0 satisfying limk→∞αk=1 and

It follows that the above ratio is bounded by p2 for α close enough to 1. ∎

Without loss of generality, we assume

We will now determine k1 such that αk1≥1e. We begin with a lemma.