We present an approximation algorithm for the maximum independent set (MIS) problem over the class of equilateral B_1-VPG graphs. These are intersection graphs of L-shaped planar objects 90^o) with both arms of each object being equal. We obtain a 36(log 2d)-approximate algorithm running in O(n(log n)^2) time for this problem, where d is the ratio d_max/d_min and d_max and d_min denote respectively the maximum and minimum length of any arm in the input equilateral L-representation of the graph. In particular, we obtain O(1)-factor approximation of MIS for B_1-VPG -graphs for which the ratio d is bounded by a constant. generalized to an O(n(log n)^2) time and a 36(log 2d_x)(log 2d_y)-approximate MIS algorithm over arbitrary B_1-VPG graphs. Here, d_x and d_y denote respectively the analogues of d when restricted to only horizontal and vertical arms of members of the input. This is an improvement over the previously best n^ϵ-approximate algorithm <cit.> (for some fixed ϵ>0), unless the ratio d is exponentially large in n. In particular, O(1)-approximation of MIS is achieved for graphs with max{d_x,d_y}=O(1). 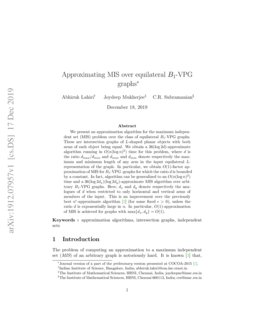 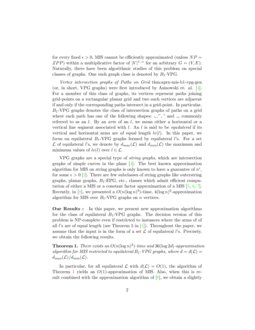 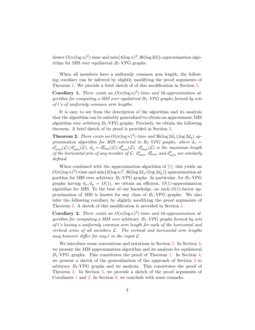 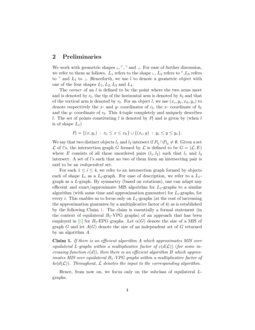 In this paper, we consider the task of computing an independent set of m...
Meike Neuwohner, et al. ∙

An Improved Approximation for Maximum k-Dependent Set on Bipartite Graphs

We present the first nontrivial approximation algorithm for the bottlene...
Hyung-Chan An, et al. ∙

The problem of computing an approximation to a maximum independent set (MIS) of an arbitrary graph is notoriously hard. It is known [hastad1999] that, for every fixed ϵ>0, MIS cannot be efficiently approximated (unless NP=ZPP) within a multiplicative factor of |V|1−ϵ for an arbitrary G=(V,E). Naturally, there have been algorithmic studies of this problem on special classes of graphs. One such graph class is denoted by B1-VPG.

Vertex intersection graphs of Paths on Grid thm:aprx-mis-b1-vpg-gen (or, in short, VPG graphs) were first introduced by Asinowski et. al. [Asin]. For a member of this class of graphs, its vertices represent paths joining grid-points on a rectangular planar grid and two such vertices are adjacent if and only if the corresponding paths intersect in a grid-point. In particular, B1-VPG graphs denotes the class of intersection graphs of paths on a grid where each path has one of the following shapes: └,┌,┐ and ┘, commonly referred to as an l. By an arm of an l, we mean either a horizontal or a vertical line segment associated with l. An l is said to be equilateral if its vertical and horizontal arms are of equal length le(l). In this paper, we focus on equilateral B1-VPG graphs formed by equilateral l’s. For a set L of equilateral l’s, we denote by dmax(L) and dmin(L) the maximum and minimum values of le(l) over l∈L.

Our Results : In this paper, we present new approximation algorithms for the class of equilateral B1-VPG graphs. The decision version of this problem is NP-complete even if restricted to instances where the arms of of all l’s are of equal length (see Theorem 5 in [lahiri]). Throughout the paper, we assume that the input is in the form of a set L of equilateral l’s. Precisely, we obtain the following results.

When all members have a uniformly common arm length, the following corollary can be inferred by slightly modifying the proof arguments of Theorem 1. We provide a brief sketch of of this modification in Section 5.

There exists an O(n(logn)2)-time and 16-approximation algorithm for computing a MIS over equilateral B1-VPG graphs formed by sets of l’s of uniformly common arm lengths.

It is easy to see from the description of the algorithm and its analysis that the algorithm can be suitably generalized to obtain an approximate MIS algorithm over arbitrary B1-VPG graphs. Precisely, we obtain the following theorem. A brief sketch of its proof is provided in Section 3.

There exists an O(n(logn)2)-time and 16-approximation algorithm for computing a MIS over arbitrary B1-VPG graphs formed by sets of l’s having a uniformly common arm length for each of the horizontal and vertical arms of all members L. The vertical and horizontal arm lengths may however differ for any l in the input L.

We work with geometric shapes └,┌,┐ and ┘. For ease of further discussion, we refer to them as follows. L1 refers to the shape └, L2 refers to ┌,L3 refers to ┐ and L4 to ┘. Henceforth, we use l to denote a geometric object with one of the four shapes L1,L2,L3 and L4.

We say that two distinct objects l1 and l2 intersect if Pl1∩Pl2≠∅. Given a set L of l’s, the intersection graph G formed by L is defined to be G=(L,E) where E consists of all those unordered pairs (l1,l2) such that l1 and l2 intersect. A set of l’s such that no two of them form an intersecting pair is said to be an independent set.

For each 1≤i≤4, we refer to an intersection graph formed by objects each of shape Li as a Li-graph. For ease of description, we refer to a L1-graph as a L-graph. By symmetry (based on rotations), one can adapt any efficeint and exact/approximate MIS algorithm for L1-graphs to a similar algorithm (with same time and approximation guarantee) for Li-graphs, for every i. This enables us to focus only on L1-graphs (at the cost of increasing the approximation guarantee by a multiplicative factor of 4) as is established by the following Claim 1. The claim is essentially a formal statement (in the context of equilateral B1-VPG graphs) of an approach that has been employed in [epst] for B1-EPG graphs. Let α(G) denote the size of a MIS of graph G and let A(G) denote the size of an independent set of G returned by an algorithm A.

Hence, from now on, we focus only on the subclass of equilateral L-graphs.

In this section, we prove Theorem 1 by designing an approximation algorithm for the following problem and then applying Claim 1.

Maximum Independent Set over equilateral L-graphs Input: A set L of L1-shaped equilateral l’s Output: a set I⊂L such that I is independent and |I| is maximized.

Before we present an approximation algorithm for this problem, we present the following claim (proved and employed in [vpgipl17]).

Without loss of generality, we can assume that : l1.xc≠l2.xc and l1.yc≠l2.yc for any pair of distinct l1,l2∈S, where L is the input set of L1-shaped l’s.

We will also be making use of the following lemma (Lemma 1 of [vpgipl17]) in the design of new approximation algorithms.

([vpgipl17]) Suppose S′ is a set of l’s, each being of type L1. Suppose there exist a horizontal line y=b and a vertical line x=a such that each l∈S′ intersects both y=b and x=a. Then, the intersection graph of members of S′ is a permutation graph.

We will also be making use of the following fact from [kim1990].

[kim1990] Given an arbitrary permutation graph G (in the form of two permutations defining G), a MIS of G can be computed in O(n(logn)) time where n=|V(G)|.

We will also be making use of the following claim.

Without loss of generality, assume that input L satisfies dmin=2.

(sketch:) Rescale the the coordinates of x-axis and y-axis by stretching both of them by a multiplicative factor of 2/dmin. ∎

The algorithm begins by dividing the input set L into disjoint sets S1,S2, …,S⌊log2d⌋ where Si={l∈S|2i≤le(l)<2i+1}, ∀i∈[⌊log2d⌋]. This split is to exploit the fact that d(Si)≤2, for any i. We further partition each Si into nine subsets as follows.

For the ith set, we do the following. We place a sufficiently large but finite grid structure on the plane covering all members of Si. The grid is chosen in such a way so that grid-length in each of the x and y directions is 2i. What we get is a rectangular array of square boxes of side length 2i each. We number the rows of boxes from bottom and the columns of boxes from left, with numbers 0,1,….

For a pictorial representation of the partition of Si into 9 subsets, see the figure below.

It now remains only to prove that a MIS can be efficiently computed for G(S1,0,0), as stated in Lemma 2 below.

Hence, by applying Theorem 3, it follows that a MIS can be computed in O(q(logq)2) time where q=|{l∈S1:l∈(r,c)}|, provided the subgraph induced by l∈(r,c) is specified in the form of two permutations defining it. It follows from the proof of Lemma 1 that the two permutations specifying the input are the two increasing orders formed by the l.xc and l.yc values of its members. These two orders can be computed in O(q(logq)) time. ∎

The broad approach is the same as for equilateral graphs except that we partition the members based on their lengths in each of the vertical and horizontal directions independently. This independent partitioning was not needed for the equilateral case since lengths are the same for both arms of any ℓ.

We further divide each of these (⌊log2dx⌋)(⌊log2dy⌋) groups Si,j into 9 smaller groups Si,j,kr,kc for kr,kc∈{0,1,2} by imposing a rectangular grid structure with grid-points being separated by lengths 2i and 2j in the horizontal and vertical directions respectively. The remaining details are as before leading to an algorithm running in O(n(logn)2) time and producing a 36(log2dx)(log2dy) MIS-approximation.

5 Proofs of Corollaries 1 and 2

The algorithm is essentially the same as the one described in the proof of Theorem 1 except for the following changes. When all equilateral l’s in the input L have uniformly the same arm length a, we have only one group instead of (⌊log2d⌋) groups we had in the proof of Theorem 1. In this case, it suffices to impose a finite grid structure whose side lengths (both horizontal and vertical) are a. After numbering the rows and columns of boxes, we partion the input into 4 subsets Skr,kc with kr,kc∈{0,1} where, as before,

When all equilateral l’s in the input L have uniformly the same vertical arm length a and horizontal arm length b, we have only one group instead of (⌊log2dx⌋)(⌊log2dy⌋) groups we had in the proof of Theorem 2. In this case, it suffices to impose a finite grid structure whose vertical and horizontal side lengths are a and b respectively. After numbering the rows and columns of boxes, we partion the input into 4 subsets Skr,kc with kr,kc∈{0,1} where, as before,

As explained before, for each kr,kc∈{0,1}, MIS can be computed exactly for the subgraph induced by Skr,kc leading to a 16-approximation of MIS in polynomial time for arbitrary B1-VPG graphs having a uniformly common vertical and horizontal arm lengths. This establishes Corollary 2.

Acknowledgements : We thank an anonymous referee (of a related submission) for pointing out that a special type of input studied here actually induces a permutation graph, thereby leading to improved running time bounds.