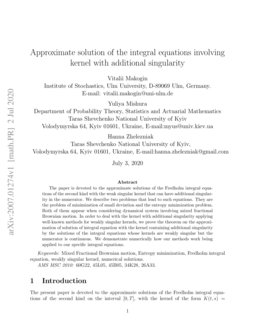 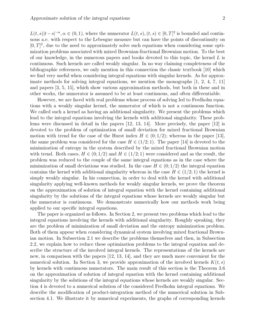 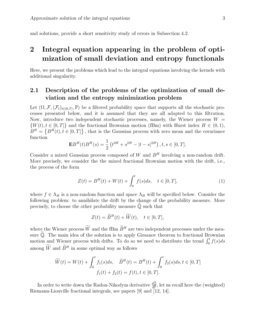 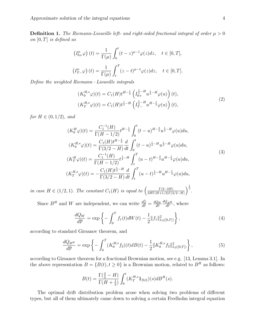 We study in this work an integral formulation for the radiative transfer...
Kui Ren, et al. ∙

This paper is concerned with the efficient spectral solutions for weakly...
Jiashu Lu, et al. ∙

The present paper is devoted to the approximate solutions of the Fredholm integral equations of the second kind on the interval [0,T], with the kernel of the form K(t,s)=L(t,s)|t−s|−α,α∈(0,1), where the numerator L(t,s),(t,s)∈[0,T]2 is bounded and continuous a.e. with respect to the Lebesgue measure but can have the points of discontinuity on [0,T]2, due to the need to approximately solve such equations when considering some optimization problems associated with mixed Brownian-fractional Brownian motion. To the best of our knowledge, in the numerous papers and books devoted to this topic, the kernel L is continuous. Such kernels are called weakly singular. In no way claiming completeness of the bibliographic references, we only mention in this connection the classic textbook [10] which we find very useful when considering integral equations with singular kernels. As for approximate methods for solving integral equations, we mention the monographs [1, 2, 4, 7, 11] and papers [3, 5, 15], which show various approximation methods, but both in these and in other works, the numerator is assumed to be at least continuous, and often differentiable.

The paper is organized as follows. In Section 2, we present two problems which lead to the integral equations involving the kernels with additional singularity. Roughly speaking, they are the problem of minimization of small deviation and the entropy minimization problem. Both of them appear when considering dynamical system involving mixed fractional Brownian motion. In Subsection 2.1 we describe the problems themselves and then, in Subsection 2.2, we explain how to reduce these optimization problems to the integral equation and describe the structure of the involved integral kernels. The representations of the kernels are new, in comparison with the papers [12, 14, 13], and they are much more convenient for the numerical solution. In Section 3, we provide approximation of the involved kernels K(t,s) by kernels with continuous numerators. The main result of this section is the Theorem 3.6 on the approximation of solution of integral equation with the kernel containing additional singularity by the solutions of the integral equations whose kernels are weakly singular. Section 4 is devoted to a numerical solution of the considered Fredholm integral equations. We describe the modification of product-integration method of the numerical solution in Subsection 4.1. We illustrate it by numerical experiments, the graphs of corresponding kernels and solutions, provide a short sensitivity study of errors in Subsection 4.2.

Here, we present the problems which lead to the integral equations involving the kernels with additional singularity.

2.1 Description of the problems of the optimization of small deviation and the entropy minimization problem

Let (Ω,F,(Ft)t∈[0,T],P) be a filtered probability space that supports all the stochastic processes presented below, and it is assumed that they are all adapted to this filtration. Now, introduce two independent stochastic processes, namely, the Wiener process W={W(t),t∈[0,T]} and the fractional Brownian motion (fBm) with Hurst index H∈(0,1), BH={BH(t),t∈[0,T]}, that is the Gaussian process with zero mean and the covariance function

Consider a mixed Gaussian process composed of W and BH involving a non-random drift. More precisely, we consider the the mixed fractional Brownian motion with the drift, i.e., the process of the form

where f∈ΛH is a non-random function and space ΛH will be specified below. Consider the following problem: to annihilate the drift by the change of the probability measure. More precisely, to choose the other probability measure ˜Q such that

where the Wiener process ˜W and the fBm ˜BH are two independent processes under the measure ˜Q. The main idea of the solution is to apply Girsanov theorem to fractional Brownian motion and Wiener process with drifts. To do so we need to distribute the trend ∫t0f(s)ds among ˜W and ˜BH in some optimal way as follows

In order to write down the Radon-Nikodym derivative d˜QdP, let us recall here the (weighted) Riemann-Liouville fractional integrals, see papers [9] and [12, 13].

The Riemann-Liouville left- and right-sided fractional integral of order μ>0 on [0,T] is defined as

Since BH and W are independent, we can write d˜QdP=dQWdPdQBHdP, where

according to standard Girsanov theorem, and

The optimal drift distribution problem arose when solving two problems of different types, but all of them ultimately came down to solving a certain Fredholm integral equation of the second kind. Namely, the paper [12] was devoted to the problem of optimization of small deviation for mixed fractional Brownian motion with trend for the case H∈(0,1/2), whereas in the paper [14], the same problem was considered for the case H∈(1/2,1). The paper [13] studied the problem of minimization of the entropy functional appearing under the distribution of the drift, and this problem was studied for H∈(0,1/2). Now our goal is twofold: first, to present the existing results from [12, 14, 13] and second, to demonstrate how to reduce the problem of minimization of entropy functional in the case H∈(1/2,1).

2.2 How to reduce the problem of the optimization to the integral equation

Therefore, the maximization of its right-hand side leads to the following optimization problem

Now consider the minimization of entropy functional, which can be formulated as follows: define the functions f1 and f2 in (4) and (5), which minimize the entropy-type functional

Entropy functional H1(P,QW,QBH) could be represented as

Thus, the minimization of (7) is equivalent to the optimization problem (6).

and C2(H)=(C1(H)Γ(|H−1/2|))2. Thus, the both optimization problems reduces the solution of the Fredholm integral equation of the second kind, which can be represented as

In this paper, we study further equation (12) and prove in the next lemma that kernel (11) can be significantly simplified.

Item (i): it is easy to see that kernel ϰH is symmetric, so that it is enough to consider only the case v<t. Then

In turn, transform the last integral in (13) with the change of variables z−vz=t−vt(1−x). Then

Item (ii): it was proved in [14] that kernel ϰH is symmetric and non-negative, consequently, we consider only the case t<v. Then

Introduce the similar change of variables for the second integral in (14) as v−zz=v−tt(1−x). Then

The lemma is proved. ∎

We start with very simple auxiliary approximation result for the sequence of operators. Let H be a real Hilbert space.

Let A:H→H be a compact positive operator, and let An,n≥1:H→H be a sequence of compact operators with spectrum σ(An) such that ∥A−An∥→0 as n→∞.

Then the spectrum σ(An) is asymptotically included into R+, in the sense that

be any sequence of eigenvalues of operators

Furthermore, |⟨(A−Ank)xnk,xnk⟩|≤∥A−Ank∥→0 as k→∞, and ⟨Axnk,xnk⟩≥0, and it immediately follows that dist(λnk,R+)→0ask→∞. The resulting contradiction proves the theorem. ∎

where x is taken from some space of functions defined on [0,T], and this space will be specified later. We assume that K has a singularity, more precisely, it has the form

Now, consider the Fredholm integral equation of the second kind

where g(t)∈L2([0,T]) is a given function, and the integral operator A has the form (15) and the kernel is taken from (16). The standard situation is when the function L is continuous. However, in the applications which we will consider later, function L will be bounded however, it may have a finite number of fatal discontinuities, i.e., points in which the limit of function L does not exist. We call such kernels as the kernels with additional singularity. In this connection, let us prove an auxiliary result concerning the possibility of approximation of the kernel L by the respective kernels with continuous numerators.

Let us describe the construction of continuous function Ln. Let x0=(t0,s0) be one of the points of discontinuity, let m be the total number of such points, and let n is sufficiently large. Each point of discontinuity, in particular, x0, can be surrounded by sufficiently small closed box B(x0,rn)={y∈[0,T]:∥y−x0∥max≤rn}, where rn=1/n and ∥⋅∥max is the maximum norm in Euclidean space. Assume that Ln=L outside the union of these small boxes, so, it is necessary to determine Ln only inside each box. Let us put for x=(t,s) and

therefore every Ln is a continuous function, Ln∈C([0,T]2). Moreover,

Now, denote Dn⊂[0,T] the projection of the union of the small boxes surrounding the points of discontinuity of L, on [0,T]. Evidently, the total Lebesgue measure of Dn does not exceed mn→0 as n→∞. Therefore,

as n→∞, and C2,n can be introduced and treated similarly, whence the proof follows. ∎

Of course, there can be different ways of construction of the functions Ln. In what follows, for us will be important to construct them in such a way that the approximating operators be self-adjoint.

Now, let us return to equation (17) and specify the assumption regarding the integral operator A.

It is just sufficient to mention that all eigenvalues of operator A are real and nonnegative, therefore the respective homogeneous equation has only trivial solution, and the proof immediately follows from the Fredholm alternative.∎

Now, let us establish the main result of this section, namely, the theorem on the approximation of solution of integral equation with the kernel containing additional singularity by the solutions of the integral equations whose kernels are of type (16), but the numerator is continuous.

Let K(t,s) be the kernel defined in (16), where the numerator L(t,s) has the following properties

Let x∈L2([0,T]) be a unique solution of equation (17). Then the sequence of functions Ln(t,s) satisfying conditions of Lemma 3.4 can be chosen in such a way that the respective integral operators are self-adjoint, for sufficiently large n≥1 the equation