In this paper, an achievable η-Nash equilibrium (η-NE) region for the two-user Gaussian interference channel with noisy channel-output feedback is presented for all η≥ 1. This result is obtained in the scenario in which each transmitter-receiver pair chooses its own transmit-receive configuration in order to maximize its own individual information transmission rate. At an η-NE, any unilateral deviation by either of the pairs does not increase the corresponding individual rate by more than η bits per channel use. 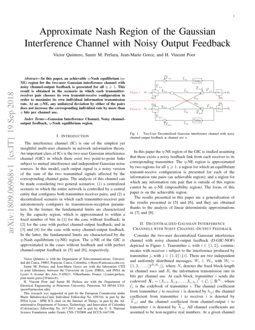 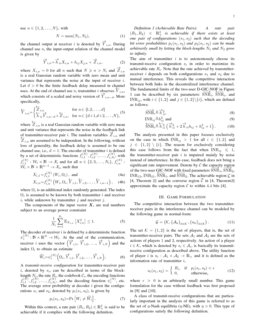 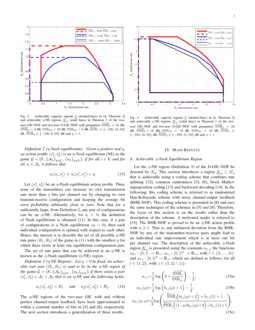 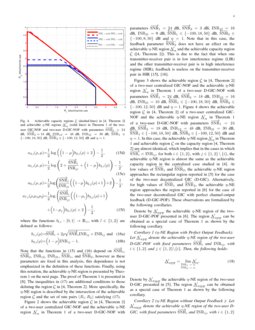 Identification over the Gaussian Channel in the Presence of Feedback

The interference channel (IC) is one of the simplest yet insightful multi-user channels in network information theory. An important class of ICs is the two-user Gaussian interference channel (GIC) in which there exist two point-to-point links subject to mutual interference and independent Gaussian noise sources. In this model, each output signal is a noisy version of the sum of the two transmitted signals affected by the corresponding channel gains. The analysis of this channel can be made considering two general scenarios: (1) a centralized scenario in which the entire network is controlled by a central entity that configures both transmitter-receiver pairs; and (2) a decentralized scenario in which each transmitter-receiver pair autonomously configures its transmission-reception parameters. In the former, the fundamental limits are characterized by the capacity region, which is approximated to within a fixed number of bits in [1] for the case without feedback; in [2] for the case with perfect channel-output feedback; and in [3] and [4] for the case with noisy channel-output feedback. In the latter, the fundamental limits are characterized by the η-Nash equilibrium (η-NE) region. The η-NE of the GIC is approximated in the cases without feedback and with perfect channel-output feedback in [5] and [6], respectively.

In this paper the η-NE region of the GIC is studied assuming that there exists a noisy feedback link from each receiver to its corresponding transmitter. The η-NE region is approximated by two regions for all η⩾1: a region for which an equilibrium transmit-receive configuration is presented for each of the information rate pairs (an achievable region); and a region for which any information rate pair that is outside of this region cannot be an η-NE (impossibility region). The focus of this paper is on the achievable region.

Consider the two-user decentralized Gaussian interference channel with noisy channel-output feedback (D-GIC-NOF) depicted in Figure 1. Transmitter i, with i∈{1,2}, communicates with receiver i subject to the interference produced by transmitter j, with j∈{1,2}∖{i}

. There are two independent and uniformly distributed messages,

Wi∈Wi, with Wi={1,2,…,⌊2NiRi⌋}, where Ni denotes the fixed block-length in channel uses and Ri the information transmission rate in bits per channel use. At each block, transmitter i sends the codeword Xi=(Xi,1,Xi,2,…,Xi,Ni)T% ∈Ci⊆RNi, where Ci is the codebook of transmitter i.

the channel output at receiver i is denoted by →Yi,n. During channel use n, the input-output relation of the channel model is given by

i. Let d>0 be the finite feedback delay measured in channel uses. At the end of channel use n, transmitter i observes ←Yi,n, which consists of a scaled and noisy version of →Yi,n−d. More specifically,

where ←Zi,n is a real Gaussian random variable with zero mean and unit variance that represents the noise in the feedback link of transmitter-receiver pair i. The random variables →Zi,n and ←Zi,n are assumed to be independent. In the following, without loss of generality, the feedback delay is assumed to be one channel use, i.e., d=1. The encoder of transmitter i is defined by a set of deterministic functions f(N)i,1,f(N)i,2,…,f(N)i,Ni, with f(N)i,1:Wi×N→Xi and for all n∈{2,3,…,Ni}, f(N)i,n:Wi×N×Rn−1→Xi, such that

The components of the input vector

Xi are real numbers subject to an average power constraint

The decoder of receiver i is defined by a deterministic function ψ(N)i:N×RN→Wi. At the end of the communication, receiver i uses the vector (→Yi,1, →Yi,2, …, →Yi,N) and the index Ωi

to obtain an estimate

A transmit-receive configuration for transmitter-receiver pair i, denoted by si, can be described in terms of the block-length Ni, the rate Ri, the codebook Ci, the encoding functions f(N)i,1,f(N)i,2,…,f(N)i,Ni, and the decoding function ψ(N)i

i given the configurations s1 and s2, denoted by pi(s1,s2), is given by

Within this context, a rate pair (R1,R2)∈R2+ is said to be achievable if it complies with the following definition.

A rate pair (R1,R2)∈R2+ is achievable if there exists at least one pair of configurations (s1,s2) such that the decoding bit error probabilities p1(s1,s2) and p2(s1,s2) can be made arbitrarily small by letting the block-lengths N1 and N2 grow to infinity.

The aim of transmitter i is to autonomously choose its transmit-receive configuration si in order to maximize its achievable rate Ri. Note that the rate achieved by transmitter-receiver i depends on both configurations s1 and s2 due to mutual interference. This reveals the competitive interaction between both links in the decentralized interference channel. The fundamental limits of the two-user D-GIC-NOF in Figure 1 can be described by six parameters: −−−→SNRi, ←−−−SNRi, and INRij, with i∈{1,2} and j∈{1,2}∖{i}, which are defined as follows:

The analysis presented in this paper focuses exclusively on the case in which INRij>1 for all i∈{1,2} and j∈{1,2}∖{i}. The reason for exclusively considering this case follows from the fact that when INRij⩽1, the transmitter-receiver pair i is impaired mainly by noise instead of interference. In this case, feedback does not bring a significant rate improvement. Denote by C the capacity region of the two-user GIC-NOF with fixed parameters −−−→SNR1, −−−→SNR2, INR12, INR21, ←−−−SNR1, and ←−−−SNR2. The achievable region C–– in [4, Theorem 2] and the converse region ¯¯¯C in [4, Theorem3] approximate the capacity region C to within 4.4 bits [4].

The competitive interaction between the two transmitter-receiver pairs in the interference channel can be modeled by the following game in normal-form:

The set K={1,2} is the set of players, that is, the set of transmitter-receiver pairs. The sets A1 and A2 are the sets of actions of players 1 and 2, respectively. An action of a player i∈K, which is denoted by si∈Ai, is basically its transmit-receive configuration as described above. The utility function of player i is ui:A1×A2→R+ and it is defined as the information rate of transmitter i,

where ϵ>0 is an arbitrarily small number. This game formulation for the case without feedback was first proposed in [9] and [10].

A class of transmit-receive configurations that are particularly important in the analysis of this game is referred to as the set of η-Nash equilibria (η-NE), with η>0. This type of configurations satisfy the following definition.

The set of rate pairs that can be achieved at an η-NE is known as the η-Nash equilibrium (η-NE) region.

The η-NE regions of the two-user GIC with and without perfect channel-output feedback have been approximated to within a constant number of bits in [5] and [6], respectively. The next section introduces a generalization of these results.

Let the η-NE region (Definition 3) of the D-GIC-NOF be denoted by Nη. This section introduces a region N–––η⊆Nη that is achievable using a coding scheme that combines rate splitting [12], common randomness [5, 6], block Markov superposition coding [13] and backward decoding [14]. In the following, this coding scheme is referred to as randomized Han-Kobayashi scheme with noisy channel-output feedback (RHK-NOF). This coding scheme is presented in [8] and uses the same techniques of the schemes in [5] and [6]. Therefore, the focus of this section is on the results rather than the description of the scheme. A motivated reader is referred to [15]. The RHK-NOF is proved to be an η-NE action profile with η⩾1. That is, any unilateral deviation from the RHK-NOF by any of the transmitter-receiver pairs might lead to an individual rate improvement which is at most one bit per channel use.

Note that the functions in (15) and (16) depend on −−−→SNR1, −−−→SNR2, INR12, INR21, ←−−−SNR1, and ←−−−SNR2, however as these parameters are fixed in this analysis, this dependence is not emphasized in the definition of these functions. Finally, using this notation, the achievable η-NE region is presented by Theorem 1 on the next page. The proof of Theorem 1 is presented in [8]. The inequalities in (17) are additional conditions to those defining the region C–– in [4, Theorem 2]. More specifically, the η-NE region is described by the intersection of the achievable region C–– and the set of rate pairs (R1,R2) satisfying (17).

Denote by N–––ηPF the achievable η-NE region of the two-user D-GIC-POF presented in [6]. The region N–––ηPF can be obtained as a special case of Theorem 1 as shown by the following corollary.

Denote by N–––ηWF the achievable η-NE region of the two-user D-GIC presented in [5]. The region N–––ηWF can be obtained as a special case of Theorem 1 as shown by the following corollary.

Note that Li is the rate achieved by the transmitter-receiver pair i when it saturates the power constraint in (5) and treats interference as noise. Following this notation, the imposibility region of the two-user GIC-NOF, i.e., ¯¯¯¯¯Nη, can be described as follows.