In this letter, we explore the performance limits of short polar codes and find that the maximum likelihood (ML) performance of a simple CRC-polar concatenated scheme can approach the finite blocklength capacity. Then, in order to approach the ML performance with a low average complexity, a CRC-aided hybrid decoding (CA-HD) algorithm is proposed and its decoding process is divided into two steps. In the first step, the received sequence is decoded by the adaptive successive cancellation list (ADSCL) decoding. In the second step, CRC-aided sphere decoding with a reasonable initial radius is used to decode the received sequence. To obtain the reasonable radius, the CRC bits of the survival paths in ADSCL are recalculated and the minimum Euclidean distance between the survival path and the received sequence is chosen as the initial radius. The simulation results show that CA-HD can achieve within about 0.025dB of the finite blocklength capacity at the block error ratio 10^-3 with code length 128 and code rate 1/2. 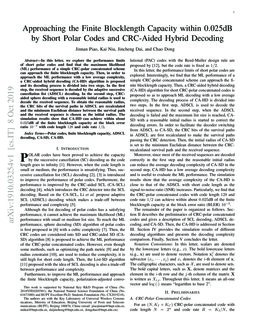 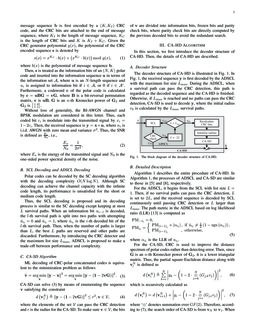 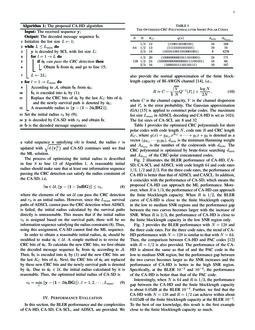 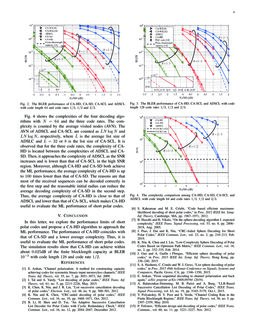 In this paper, the paradigm of sphere decoding (SD) based on lattice Gau...
Zheng Wang, et al. ∙

Although the list decoding of polar codes has a satisfying performance, it cannot achieve the maximum likelihood (ML) performance with small or medium list size. To reach the ML performance, sphere decoding (SD) algorithm of polar codes is first proposed in [6] with a cubic complexity [7]. Then, the CRC codes are considered into SD and CRC-aided SD (CA-SD) algorithm [8] is proposed to achieve the ML performance of the CRC-polar concatenated codes. However, even though some methods, such as optimizing the path metric [9] and the radius constraint [10], are used to reduce the complexity, it is still high for short code length. Then, the List-SD algorithm [11] proposed with the idea of SCL decoding is also a trade-off between performance and complexity.

Furthermore, to improve the ML performance and approach the finite blocklength capacity, polarization-adjusted convolutional (PAC) codes with the Reed-Muller design rule are proposed by [12], but the code rate is fixed as 1/2.

In this letter, the performance limits of short polar codes are explored. Interestingly, we find that the ML performance of a simple CRC-polar concatenated scheme can approach the finite blocklength capacity. Then, a CRC-aided hybrid decoding (CA-HD) algorithm for short CRC-polar concatenated codes is proposed so as to approach ML decoding with a low average complexity. The decoding process of CA-HD is divided into two steps. In the first step, ADSCL is used to decode the received sequence. In the second step, when the ADSCL decoding is failed and the maximum list size is reached, CA-SD with a reasonable initial radius is started to correct the decoding errors. In order to facilitate the decoder switching from ADSCL to CA-SD, the CRC bits of the survival paths in ADSCL are first recalculated to make the survival paths passing the CRC detection. Then, the initial radius of CA-SD is set to the minimum Euclidean distance between the CRC-recalculated survival path and the received sequence.

Moreover, since most of the received sequences are decoded correctly in the first step and the reasonable initial radius can reduce the average decoding complexity of CA-SD in the second step, CA-HD has a low average decoding complexity and is useful to evaluate the ML performance. The simulation results show that the average complexity of the CA-HD is close to that of the ADSCL with short code length as the signal-to-noise ratio (SNR) increases. Particularly, we find that the CRC-polar concatenated codes with code length 128 and code rate 1/2 can achieve within about 0.025dB of the finite blocklength capacity at the block error ratio (BLER) 10−3.

The remainder of the paper is organized as follows. Section II describes the preliminaries of CRC-polar concatenated codes and gives a description of SCL decoding, ADSCL decoding, and CA-SD. Then, the CA-HD is addressed in Section III. Section IV provides the simulation results of different decoding algorithms and presents the decoding complexity comparison. Finally, Section V concludes the letter.

) are used to denote vectors. Notation

xji denotes the subvector (xi,⋯,xj) and xi denotes the i-th element of x. The calligraphic characters, such as X, are used to denote sets. The bold capital letters, such as X, denote matrices and the element in the i-th row and the j-th column of the matrix X is written as Xi,j. Throughout this letter, 1 means an all-one vector and log(⋅) means “logarithm to base 2”.

where b(x) is the polynomial of message sequence b.

Without loss of generality, the BI-AWGN channel and BPSK modulation are considered in this letter. Thus, each coded bit ci is modulate into the transmitted signal by xi=1−2ci. Then, the received sequence is y=x+n, where ni

is i.i.d. AWGN with zero mean and variance

where Es is the energy of the transmitted signal and N0 is the one-sided power spectral density of the noise.

Polar codes can be decoded by the SC decoding algorithm with the decoding complexity O(NlogN). Although SC decoding can achieve the channel capacity with the infinite code length, its performance is unsatisfied for the short or medium code length.

Thus, the SCL decoding is proposed and its decoding process is similar to the SC decoding except keeping at most L survival paths. When an information bit ui−1 is decoded, the l-th survival path is split into two paths with attempting ^uil=0 and ^uil=1, where ^uil is the i-th decoded bit of the l-th survival path. Then, when the number of paths is larger than L, the best L paths are reserved and other paths are discarded. Furthermore, by introducing the CRC detector and the maximum list size Lmax, ADSCL is proposed to make a trade-off between performance and complexity.

where the elements of the set V can pass the CRC detection and r is the radius for the CA-SD. To make sure v∈V, the bits of v are divided into information bits, frozen bits and parity check bits, where parity check bits are directly computed by the previous decoded bits to avoid the redundant search.

In this section, we first introduce the decoder structure of CA-HD. Then, the details of CA-HD are described.

The decoder structure of CA-HD is illustrated in Fig. 1. In Fig. 1, the received sequence y is first decoded by the ADSCL with the maximum list size Lmax. During the ADSCL, when a survival path can pass the CRC detection, this path is regarded as the decoded sequence and the CA-HD is finished. Otherwise, if Lmax is reached and no paths can pass the CRC detection, CA-SD is used to decode y, where the initial radius r0 is calculated by the Lmax survival paths.

Algorithm 1 describes the entire procedure of CA-HD. In Algorithm 1, the processes of ADSCL and CA-SD are similar to those in [5] and [8], respectively.

For the ADSCL, it begins from the SCL with list size L=1. Then, if no survival paths can pass the CRC detection, L is set to 2L, and the received sequence is decoded by SCL continuously until passing CRC detection or L larger than Lmax. The path metric in the ADSCL based on log likelihood ratio (LLR) [13] is computed as

where αil is the LLR of uil.

For the CA-SD, CRC is used to improve the distance spectrum of polar codes rather than detecting error. Then, since G is an n-th Kronecker power of G2, it is a lower triangular matrix. Thus, the partial square-Euclidean distance along with vNi is defined as

which is recursively calculated as

where ‘⊕’ denotes summation over GF(2). Therefore, according to (7), the search order of CA-SD is from vN to v1. When a valid sequence v satisfying (4) is found, the radius r is updated with √d(vN1) and CA-SD continues until we find the ML solution.

The process of optimizing the initial radius is described in line 8 to line 13 of Algorithm 1. A reasonable initial radius should make sure that at least one information sequence passing the CRC detection can satisfy the radius constraint of the CA-SD, i.e,

In this section, the BLER performance and the complexities of CA-HD, CA-SD, CA-SCL, and ADSCL are provided. We also provide the normal approximation of the finite blocklength capacity of BI-AWGN channel [14], i.e.,

is the error probability. The Gaussian approximation (GA)

[15] is applied to construct polar codes. The maximum list size Lmax in ADSCL decoding and CA-HD is set as 1024. The list sizes of CA-SCL are 8 and 32

Table I provides the optimized CRC polynomials for short polar codes with code length N, code rate R and CRC length KC, where g(x)=gKCxKC+⋯+g1x+g0 is denoted as a vector (gKC⋯g1g0), dmin is the minimum Hamming weight and Admin is the number of the codewords with dmin. The CRC polynomial is optimized by brute-force searching dmin and Admin of the CRC-polar concatenated codes.