Applying the Decisiveness and Robustness Metrics to Convolutional Neural Networks

We review three recently-proposed classifier quality metrics and consider their suitability for large-scale classification challenges such as applying convolutional neural networks to the 1000-class ImageNet dataset. These metrics, referred to as the "geometric accuracy," "decisiveness," and "robustness," are based on the generalized mean (ρ equals 0, 1, and -2/3, respectively) of the classifier's self-reported and measured probabilities of correct classification. We also propose some minor clarifications to standardize the metric definitions. With these updates, we show some examples of calculating the metrics using deep convolutional neural networks (AlexNet and DenseNet) acting on large datasets (the German Traffic Sign Recognition Benchmark and ImageNet). 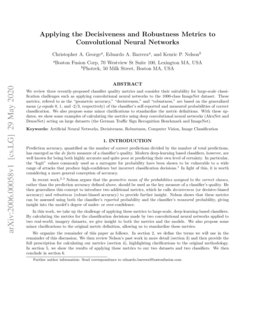 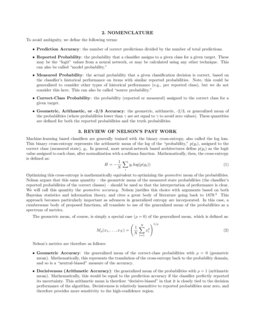 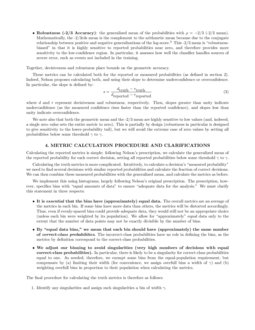 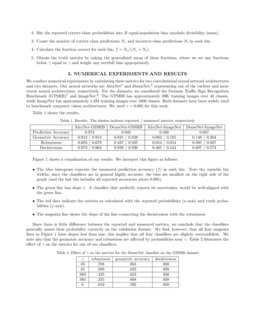 Quantum Neural Networks (QNNs) are an emerging technology that can be us...
Sylwia Kuros, et al. ∙

Much of the focus in the design of deep neural networks has been on impr...
Alexander Wong, et al. ∙

In the realm of multimodal communication, sign language is, and continue...
Vivek Bheda, et al. ∙

Guiding the retraining of convolutional neural networks against adversarial inputs

measure of a classifier’s quality. Modern deep-learning based classifiers, however, are well known for being both highly accurate and quite poor at predicting their own level of certainty. In particular, the “logit” values commonly used as a surrogate for probability have been shown to be vulnerable to a wide range of attacks that produce high-confidence but incorrect classification decisions

[8]. In light of this, it is worth considering a more general conception of accuracy.

In recent work [7, 6], Nelson argues that the geometric mean of the probabilities assigned to the correct classes, rather than the prediction accuracy defined above, should be used as the key measure of a classifier’s quality. He then generalizes this concept to introduce two additional metrics, which he calls decisiveness (or decisive-biased accuracy) and robustness (robust-biased accuracy) to provide further insight. Nelson shows that these metrics can be assessed using both the classifier’s reported probability and the classifier’s measured probability, giving insight into the model’s degree of under- or over-confidence.

In this work, we take up the challenge of applying these metrics to large-scale, deep-learning-based classifiers. By calculating the metrics for the classification decisions made by two convolutional neural networks applied to two real-world, imagery datasets, we give insight to both the metrics and the models. We also propose some minor clarifications to the original metric definition, allowing us to standardize these metrics.

We organize the remainder of this paper as follows. In section 2, we define the terms we will use in the remainder of this discussion. We then review Nelson’s past work in more detail (section 3) and then provide the full prescription for calculating our metrics (section 4), highlighting clarifications to the original methodology. In section 5, we show the results of applying these metrics to our two datasets and two classifiers. We then conclude in section 6.

3 Review of Nelson’s Past Work

Machine-learning based classifiers are generally trained with the binary cross-entropy, also called the log loss. This binary cross-entropy represents the arithmetic mean of the log of the “probability,” p(yi), assigned to the correct class (measured state), yi. In general, most neural-network based architectures define p(yi) as the logit value assigned to each class, after normalization with a softmax function. Mathematically, then, the cross-entropy is defined as:

. Nelson justifies this choice with arguments based on both Bayesian statistics and information theory, and cites a great body of literature going back to 1879

[5]. This approach becomes particularly important as advances in generalized entropy are incorporated. In this case, a cumbersome body of proposed functions, all translate to use of the generalized mean of the probabilities as a spectrum of metrics.

The geometric mean, of course, is simply a special case (ρ=0) of the generalized mean, which is defined as:

Nelson’s metrics are therefore as follows:

Together, decisiveness and robustness place bounds on the geometric accuracy.

These metrics can be calculated both for the reported or measured probabilities (as defined in section 2). Indeed, Nelson proposes calculating both, and using their slope to determine underconfidence or overconfidence. In particular, the slope is defined by:

We note also that both the geometric mean and the -2/3 mean are highly sensitive to low values (and, indeeed, a single zero value sets the entire metric to zero). This is partially by design (robustness in particular is designed to give sensitivity to the lower-probability tail), but we will avoid the extreme case of zero values by setting all probabilities below some threshold γ to γ.

We implement this using histograms, largely following Nelson’s original prescription. The prescription, however, specifies bins with “equal amounts of data” to ensure “adequate data for the analysis.” We must clarify this statement in three respects:

The final procedure for calculating the truth metrics is therefore as follows:

We conduct numerical experiments by calculating these metrics for two convolutional neural network architectures and two datasets. Our neural networks are AlexNet [4] and DenseNet [3], representing one of the earliest and most recent neural architectures, respectively. For the datasets, we considered the German Traffic Sign Recognition Benchmark (GTSRB) [9] and ImageNet [2]. The GTSRB has approximately 39K training images over 43 classes, while ImageNet has approximately 1.3M training images over 1000 classes. Both datasets have been widely used to benchmark computer vision architectures. We used γ=0.005 for this work.

Figure 1 shows a visualization of our results. We interpret this figure as follows:

Since there is little difference between the reported and measured metrics, we conclude that the classifiers generally assess their probability correctly on the validation dataset. We find, however, that all four magenta lines in Figure 1 have slopes less than one; this implies that all four classifiers are slightly overconfident. We note also that the geometric accuracy and robustness are affected by probabilities near γ. Table 2 illustrates the effect of γ on the metrics for one of our classifiers.

We have applied the generalized metrics, geometric accuracy, decisiveness, and robustness, to real-world, deep-learning-based classifiers on large-scale datasets. We have also clarified the binning scheme to define a well-defined procedure by which these metrics can be calculated across different classifiers. In particular, we found it necessary to set a minimum bound (γ) on all values when calculating the metrics; the value of γ significantly affected geometric accuracy and (especially) robustness.

We found that the source and model metrics were remarkably consistent. Integrating decisiveness and robustness into the classifier’s loss function is a promising future direction, and has indeed already been partially considered

This work was supported by the Air Force Research Laboratory under contract number FA8750-17-C-0282.