Any polyhedron accommodates a type of potential theoretic skeleton called a mother body. The study of such mother bodies was originally from Mathematical Physics, initiated by Zidarov and developed by Björn Gustafson and Makoto Sakai. In this paper, we attempt to apply the brilliant idea of mother body to Electrostatics to compute the potentials of electric fields. 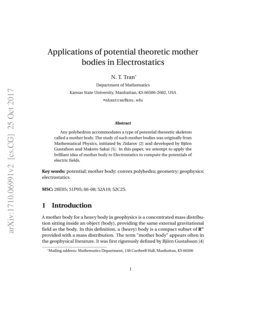 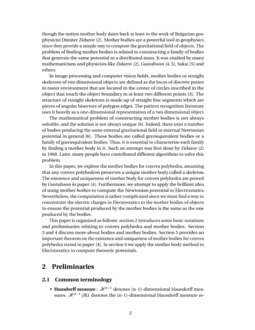 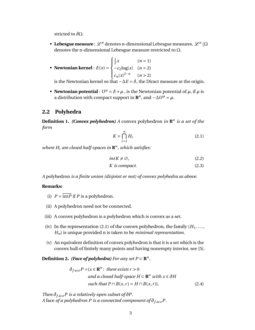 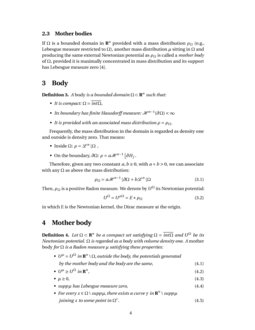 A mother body for a heavy body in geophysics is a concentrated mass distribution sitting inside an object (body), providing the same external gravitational field as the body. In this definition, a (heavy) body is a compact subset of Rn provided with a mass distribution. The term "mother body" appears often in the geophysical literature. It was first rigorously defined by Björn Gustafsson [4] though the notion mother body dates back at least to the work of Bulgarian geophysicist Dimiter Zidarov [2]. Mother bodies are a powerful tool in geophysics since they provide a simple way to compute the gravitational field of objects. The problem of finding mother bodies is related to constructing a family of bodies that generate the same potential as a distributed mass. It was studied by many mathematicians and physicists like Zidarov [2], Gustafsson [4, 5], Sakai [5] and others.

In image processing and computer vision fields, mother bodies or straight skeletons of two dimensional objects are defined as the locus of discrete points in raster environment that are located in the center of circles inscribed in the object that touch the object boundary in at least two different points

. The structure of straight skeletons is made up of straight line segments which are pieces of angular bisectors of polygon edges. The pattern recognition literature uses it heavily as a one-dimensional representation of a two dimensional object.

The mathematical problem of constructing mother bodies is not always solvable, and the solution is not always unique [6]. Indeed, there exist a number of bodies producing the same external gravitational field or external Newtonian potential in general [6]. These bodies are called graviequivalent bodies or a family of graviequivalent bodies. Thus, it is essential to characterize each family by finding a mother body in it. Such an attempt was first done by Zidarov [2] in 1968. Later, many people have contributed different algorithms to solve this problem.

where Hi are closed half-spaces in Rn, which satisfies:

A polyhedron is a finite union (disjoint or not) of convex polyhedra as above.

(Face of polyhedra) For any set P⊂Rn,

Then ∂faceP is a relatively open subset of ∂P. A face of a polyhedron P is a connected component of ∂faceP.

A body is a bounded domain Ω⊂Rn such that:

Frequently, the mass distribution in the domain is regarded as density one and outside is density zero. That means:

Therefore, given any two constant a,b≥0, with a+b>0, we can associate with any Ω as above the mass distribution:

Then, ρΩ is a positive Radon measure. We denote by UΩ its Newtonian potential:

in which E is the Newtonian kernel, the Dirac measure at the origin.

Let Ω⊂Rn be a compact set satisfying Ω=¯¯¯¯¯¯¯¯¯¯¯¯¯intΩ and UΩ be its Newtonian potential. Ω is regarded as a body with volume density one. A mother body for Ω is a Radon measure μ satisfying these properties:

From (4.1) and (4.2), it implies that: suppμ⊂¯Ω, since the potential generated outside the body is positive but inside the body is zero. In order to find a measure μ that satisfies all of (4.1) to (4.4), we can just fill Ω with infinitely many disjoint balls until the remaining set has measure zero. Then, we can replace the mass distribution ρΩ by the sum of the appropriate point masses sitting in the center of these balls. Thus, we can rewrite the body and the mother body as:

The five properties in definition 4 above are the basic axioms of mother bodies that are further discussed in paper [4]. Note that since μ=ρΩ, the mother body is the concentrated mass distribution of the body, there exist many mother bodies satisfying axioms (4.1) to (4.3). Thus, a mother body for Ω should be one of them. Nevertheless, there is neither existence nor uniqueness of mother bodies satisfying the five axioms in general; but under some special conditions such as in convex polyhedra case, the existence and uniqueness of solutions to the problem of finding mother bodies do hold. In the next section, we will investigate more about them.

The following theorem is the most important result of studying mother bodies for convex polyhedra. It is stated in paper [4].

Let Ω⊂Rn be a convex bounded open polyhedron provided with a mass distribution ρΩ as in section 3. Then there exists a measure μ satisfying axioms (4.1) to (4.5

). Its support is contained in a finite union of hyperplanes and reaches

∂Ω only at corners and edges (not at faces), it has no mass on ∂Ω, and Uμ is a Lipschitz continuous function. Moreover, μ is unique among all signed measures satisfying axioms (4.1), (4.4) and (4.5).

For the detailed proof, one can refer to paper [4].

In Physics, not every problem can be solved perfectly with a precise solution. Instead, we have to use approximation methods. Likewise for electric potentials, it is only for a few cases that we can compute the potentials exactly [1]. In this section, we will use mother bodies to find the electric potentials of some basic bodies.

Suppose we have a point P outside of a spherical shell S with radius R, area A and uniform charge density σ as showed in figure 2.

Consider a ring on the shell, centered on the line from the center of the shell to P. Every particle on the ring has the same distance s to the point P.

The electric potential of a particle i on the ring with charge density σ at P is:

in which ϵ0 is the permittivity of free space, ϵ0=8.85×10−12C2/Nm2, and s is the distance from the point P to the particle i. The electric potential of the whole ring at the point P is the sum of all potential Vi at P. Let this potential sum be dV. We have:

Taking differentials of both sides:

Substituting this into dV:

Integrating dV, we have:

This is the electric potential of a point charge q at the distance r, i.e. the potential of the spherical shell S (body) at any distance r is the same as that of its mother body at the same distance.

Let P be a point outside a cylindrical solid body with radius R, length L, and uniform charge density ρ as in figure 3. The distance from P to the center axis of the cylinder is r.

where Qenc is the total charge enclosed within the surface S and dA is the area of an infinitesimal piece of the surface S.

Since the electric field is the same everywhere by symmetry, we can move Ecylinder out of the integral. Furthermore, since Ecylinder points radially outward, as does dA, we can drop the dot product and deal with only the magnitudes:

The total charge Qenc=πR2Lρ. Substituting all these into 6.10, we have:

is the unit vector pointing in the direction of

If we choose the reference point at a distance a, and since Ecylinder points outward, the potential is:

in which L is the length of the line. By the same argument as above, 6.19 becomes:

If we also choose the reference point at a distance a, and since Eline points outward, the potential is:

Substituting λ=πR2ρ into Vline, we have:

Let P be the point sitting on the vertex of a conical surface (an empty cone) with radius R, height h and uniform charge density σ as in figure 5.

If we divide the cone into rings, the electric potential of an element on one ring at the point P is:

In order to find the electric potential of the whole cone to the point P, we need to take the integral:

in which √R2+h2 is the slant length of the cone. Since we have:

substituting this into Vcone, we have:

We can rewrite this formula in terms of the total charge q by a small replacement:

substituting this into Vline:

Now we know how to apply the idea of using mother bodies to compute the Newtonian potential to Electrostatics. Moreover, we can see that the potential computation is much easier if we use mother bodies rather than bodies in general. However, it is easy only for simple symmetric bodies. For complicated bodies, e.g. asymmetric ones, the computation is very difficult, sometimes impossible to do in closed form, since we have to deal with integrals on mother bodies.