Modern software development relies heavily on Application Programming Interface (API) libraries. However, there are often certain constraints on using API elements in such libraries. Failing to follow such constraints (API misuse) could lead to serious programming errors. Many approaches have been proposed to detect API misuses, but they still have low accuracy and cannot repair the detected misuses. In this paper, we propose SAM, a novel approach to detect and repair API misuses automatically. SAM uses statistical models to describe five factors involving in any API method call: related method calls, exceptions, pre-conditions, post-conditions, and values of arguments. These statistical models are trained from a large repository of high-quality production code. Then, given a piece of code, SAM verifies each of its method calls with the trained statistical models. If a factor has a sufficiently low probability, the corresponding call is considered as an API misuse. SAM performs an optimal search for editing operations to apply on the code until it has no API issue. 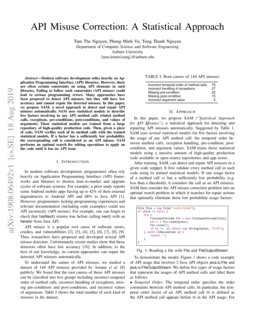 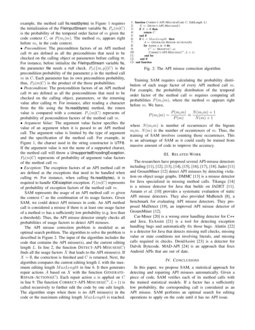 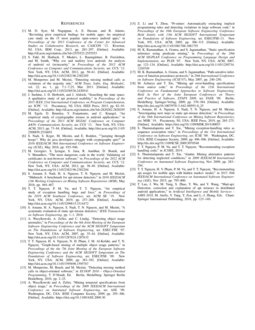 APIScanner – Towards Automated Detection of Deprecated APIs in Python Libraries

The main purpose of a voice command system is to process a sentence in n...
Matúš Sulír, et al. ∙

Web APIs may have constraints on parameters, such that not all parameter...
Henk Grent, et al. ∙

In modern software development, programmers often rely heavily on Application Programming Interface (API) frameworks and libraries to shorten time-to-market and upgrade cycles of software systems. For example, a prior study reports some Android mobile apps having up to 42% of their external dependencies to Android API and 68% to Java API [20]. However, programmers lacking programming experiences and relevant documentation (including code examples) could use API incorrectly (API misuse). For example, one can forget to check that hasNext() returns true before calling next() with an Iterator from Java API.

API misuse is a popular root cause of software errors, crashes, and vulnerabilities [6, 11, 19, 5, 12, 7, 2, 14]. Thus, researchers have proposed and developed several API misuse detectors. Unfortunately, recent studies show that those detectors often have low accuracy [3]. In addition, to the best of our knowledge, no current approaches can repair the detected API misuses automatically.

To understand the nature of API misuses, we studied a dataset of 144 API misuses provided by Amann et al. [2]

publicly. We found that the root causes of those API misuses can be classified into five groups including incorrect temporal order of method calls, incorrect handling of exceptions, missing pre-conditions and post-conditions, and incorrect values of arguments. Table

I shows the total number of each kind of misuses in the dataset.

After training, SAM, can detect and repair API misuses in a given code snippet. It first validate every method call in such code using its trained statistical models. If one usage factor of a method call m has a sufficiently low probability (e.g. less than a threshold), it considers the call as an API misuses. SAM then consider the API misuse correction problem into an optimal search problem in which it searches for repair actions that optimally eliminate those low probability usage factors.

m. For example, the probability distribution of the temporal order factor of the method call m requires computing all probabilities P(mi|m), where the method m appears right before m. We have,

Car-Miner [22] is a wrong error handling detector for C++ and Java. ExAssist [15] is a tool for detecting exception handling bugs and automatically fix those bugs. Alattin [21] is a detector for Java that detects missing null checks, missing value or state conditions not involving literals, and missing calls required in checks. DroidAssist [13] is a detector for Dalvik Bytecode. MAD-API [9] is an approach that fixes Android APIs that are out of date.

In this paper, we propose SAM, a statistical approach for detecting and repairing API misuses automatically. Given a piece of code, SAM verifies each of its method calls with the trained statistical models. If a factor has a sufficiently low probability, the corresponding call is considered as an API misuse. SAM performs an optimal search for editing operations to apply on the code until it has no API issue.