AP16-OL7: A Multilingual Database for Oriental Languages and A Language Recognition Baseline

We present the AP16-OL7 database which was released as the training and test data for the oriental language recognition (OLR) challenge on APSIPA 2016. Based on the database, a baseline system was constructed on the basis of the i-vector model. We report the baseline results evaluated in various metrics defined by the AP16-OLR evaluation plan and demonstrate that AP16-OL7 is a reasonable data resource for multilingual research. 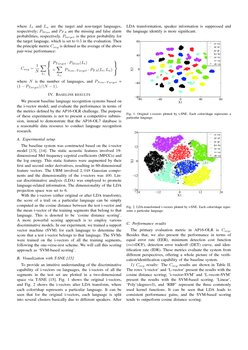 The complex acoustic and linguistic patterns of oriental languages have attracted much interest in a multitude of research areas, including comparative phonetics, evolutionary linguistics, second language acquisition, and social linguistics. In particular, the diverse evolution paths of these languages and their complicated interaction offers a valuable opportunity for studying mixlingual and multilingual phenomena.

To promote research for oriental languages, particularly on multilingual speech and language processing, the center for speech and language technologies (CSLT) at Tsinghua University and Speechocean collaborated together and organized an oriental language recognition (OLR) challenge on APSIPA 2016. This event called for a competition on a language recognition task on seven oriental languages. To support this event, Speechocean released a multilingual speech database AP16-OL7 and made it free for the challenge participants. This paper will present the data profile of the database, the evaluation rules of the challenge, and a baseline system that the participants can refer to.

Note that there are several databases that can be used for multilingual research. For example, polyphone [6], globalPhone [7], NTT multilingual database333http://www.ntt-at.com/product/speech2002/, SPEECHDAT-CAR [8],Speechdat-E [9], Babel [10], and the multilingual databases created by the new Babel project. To our best knowledge, AP16-OL7 is the first multilingual speech database specifically designed for oriental languages.

The AP16-OL7 database was originally created by Speechocean targeting for various speech processing tasks (mainly speech recognition). The entire database involves seven datasets, each in a particular language. The seven languages are: Mandarin, Cantonese, Indoesian, Japanese, Russian, Korean, Vietnamese. The data volume for each language is about 10 hours of speech signals recorded by 24 speakers (12 males and 12 females), and each speaker recorded about 300 utterances in reading style. The signals were recorded by mobile phones, with a sampling rate of 16kHz and a sample size of 16 bits. Each dataset was split into a training set consisting of 18 speakers, and a test set consisting of 6 speakers. For Mandarin, Cantonese, Vietnamese and Indonesia, the recording was conducted in a quiet environment. As for Russian, Korean and Japanese, there are 2 recording sessions for each speaker: the first session was recorded in a quiet environment and the second was recorded in a noisy environment. The basic information of the AP16-OL7 database is presented in Table 1.

The AP16-OL7 database is freely available for the participants of the AP16-OLR challenge and the APSIPA 2016 special session on multilingual speech and language processing. It is also available for any academic and industrial users, subject to a slightly different licence from SpeechOcean.444http://speechocean.com

Based on the AP16-OL7 database, we call an oriental language recognition (OLR) challenge.555http://cslt.riit.tsinghua.edu.cn/mediawiki/index.php/ASR-events-AP16-details Following the definition of NIST LRE15 [11], the task of the challenge is defined as follows: Given a segment of speech and a language hypothesis (i.e., a target language of interest to be detected), the task is to decide whether that target language was in fact spoken in the given segment (yes or no), based on an automated an analysis of the data contained in the segment. The AP16-OLR evaluation plan also follows the principles of NIST LRE15: it focuses on the close-set condition, and allows no additional training materials besides AP16-OL7. The evaluation details are described as follows.

The input to the OLR system is a set of speech segments in unknown languages (but within the 7 languages of AP16-OL7). The task of the OLR system is to determine the confidence that a language is contained in a speech segment. More specifically, for each speech segment, the OLR system outputs a score vector <ℓ1,ℓ2,...,ℓ7>, where ℓi represents the confidence that language i is spoken in the speech segment. Each score ℓi will be interpreted as follows: if ℓi≥0, then the decision would be that language i is contained in the segment, otherwise it is not. The scores should be comparable across languages and segments. This is consistent with the principle of LRE15, but differs from that of LRE09 [12] where an explicit decision is required for each trial.

In summary, the output of an OLR submission will be a text file, where each line contains a speech segment plus a score vector for this segment, e.g.,

As in LRE15, the AP16-OLR challenge chooses Cavg

as the principle evaluation metric. First define the pair-wise loss that composes the missing and false alarm probabilities for a particular target/non-target language pair:

where Lt and Ln are the target and non-target languages, respectively; PMiss and PFA are the missing and false alarm probabilities, respectively. Ptarget

is the prior probability for the target language, which is set to

0.5 in the evaluation. Then the principle metric Cavg is defined as the average of the above pair-wise performance:

We present baseline language recognition systems based on the i-vector model, and evaluate the performance in terms of the metrics defined by the AP16-OLR challenge. The purpose of these experiments is not to present a competitive submission, instead to demonstrate that the AP16-OL7 database is a reasonable data resource to conduct language recognition research.

The baseline system was constructed based on the i-vector model [13, 14]. The static acoustic features involved 19-dimensional Mel frequency cepstral coefficients (MFCCs) and the log energy. This static features were augmented by their first and second order derivatives, resulting in 60-dimensional feature vectors. The UBM involved 2,048 Gaussian components and the dimensionality of the i-vectors was 400. Linear discriminative analysis (LDA) was employed to promote language-related information. The dimensionality of the LDA projection space was set to 6.

With the i-vectors (either original or after LDA transform), the score of a trail on a particular language can be simply computed as the cosine distance between the test i-vector and the mean i-vector of the training segments that belong to that language. This is denoted to be ‘cosine distance scoring’. A more powerful scoring approach is to employ various discriminative models. In our experiment, we trained a support vector machine (SVM) for each language to determine the score that a test i-vector belongs to that language. The SVMs were trained on the i-vectors of all the training segments, following the one-verse-rest scheme. We will call this scoring approach as ‘SVM-based scoring’.

To provide an intuitive understanding of the discriminative capability of i-vectors on languages, the i-vectors of all the segments in the test set are plotted in a two-dimensional space via T-SNE [15]. Fig.  1 shows the original i-vectors, and Fig.  2 shows the i-vectors after LDA transform, where each color/shap represents a particular language. It can be seen that for the original i-vectors, each language is split into several clusters basically due to different speakers. After LDA transformation, speaker information is suppressed and the language identify is more significant.

The primary evaluation metric in AP16-OLR is Cavg. Besides that, we also present the performance in terms of equal error rate (EER), minimum detection cost function (minDCF), detection error tradeoff (DET) curve, and identification rate (IDR). These metrics evaluate the system from different perspectives, offering a whole picture of the verification/identification capability of the baseline system.

The Cavg results are shown in Table 2. The rows ‘i-vector’ and ‘L-vector’ present the results with the cosine distance scoring; ‘i-vector-SVM’ and ‘L-vecotr-SVM’ present the results with the SVM-based scoring. ‘Linear’, ‘Poly’(degree=3), and ‘RBF’ represent the three commonly used kernel functions. It can be seen that LDA leads to consistent performance gains, and the SVM-based scoring tends to outperform cosine distance scoring.

EER and minDCF are also widely used in measuring performance of verification systems. Compared to Cavg, these two metrics are not related to the decision result, but the quality of the scoring, and therefore evaluate the verification system from a different angle. The results for these two metrics are presented in Table 2. respectively. It can be seen that similar conclusions can be drawn from these results as from the Cavg results.

The DET curve is another popular way to evaluate verification systems. Compared to Cavg, EER and minDCF, the DET curve presents performance on all operation points, and therefore can evaluate a verification system in a more systematic way. Experimental results are shown in Fig 3. The black circles represent the operation location where the minDCFs are obtained. Again, similar conclusions as with the Cavg, EER and minDCF can be obtained.

Note that in the OLR challenge, the target languages are known in prior, and the confidence scores are comparable across languages. This means that OLR can be treated as a language identification task, for which the language obtaining the highest score in a trail is regarded as the identification result. For such an identification task, IDR is a widely used metric [16], which treats errors on all languages equally serious. IDR is formally defined as follows:

where Tc and Ti are the numbers of correctly and incorrectly identified utterances, respectively. Table 2 presents the IDR results of the baseline system. We can observe similar trends as with the verification metrics: Cavg, EER, minDCF and DET curve.