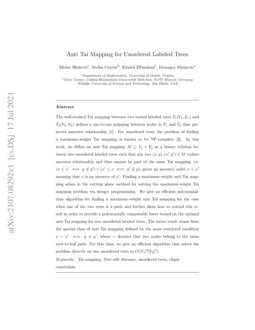 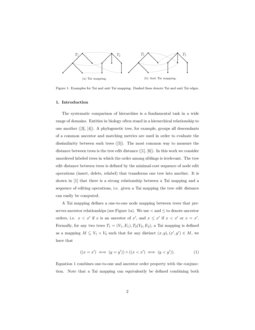 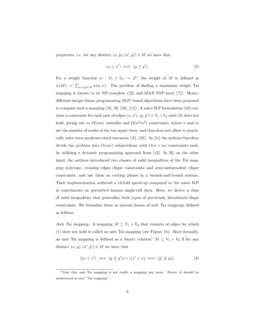 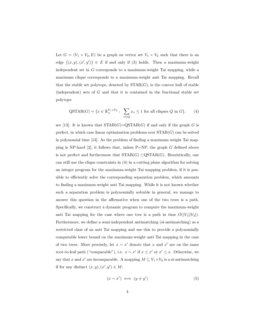 The systematic comparison of hierarchies is a fundamental task in a wide range of domains. Entities in biology often stand in a hierarchical relationship to one another (Hainke et al. (2012), Dutkowski et al. (2013)). A phylogenetic tree, for example, groups all descendants of a common ancestor and matching metrics are used in order to evaluate the dissimilarity between such trees (Damian Bogdanowicz (2013)). The most common way to measure the distance between trees is the tree edit distance (Tai (1979), Yoshino and Hirata (2017)). In this work we consider unordered labeled trees in which the order among siblings is irrelevant. The tree edit distance between trees is defined by the minimal-cost sequence of node edit operations (insert, delete, relabel) that transforms one tree into another. It is shown in Tai (1979) that there is a strong relationship between a Tai mapping and a sequence of editing operations, i.e. given a Tai mapping the tree edit distance can easily be computed.

Equation 1 combines one-to-one and ancestor order property with the conjunction. Note that a Tai mapping can equivalently be defined combining both properties, i.e. for any distinct (x,y),(x′,y′)∈M we have that

). Hence, different integer linear programming (ILP) based algorithms have been proposed to compute such a mapping (

Kondo et al. (2014), Do et al. (2019), Böcker et al. (2013), Hong et al. (2017)). A naive ILP formulation Böcker et al. (2013) contains a constraint for each pair of edges (x,x′),(y,y′)∈V1×V2 such (2) does not hold, giving rise to O(nm) variables and O(n2m2) constraints, where n and m are the number of nodes of the two input trees, and thus does not allow to practically solve even moderate-sized instances (Kondo et al. (2014), Böcker et al. (2013)). In Hong et al. (2017) the authors therefore divide the problem into O(nm) subproblems with O(n+m) constraints each, by utilizing a dynamic programming approach from Fukagawa et al. (2011). In Do et al. (2019), on the other hand, the authors introduced two classes of valid inequalities of the Tai mapping polytope, crossing edges clique constraints and semi-independent clique constraints, and use them as cutting planes in a branch-and-bound scheme. Their implementation achieved a 13-fold speed-up compared to the naive ILP in experiments on perturbed human single-cell data. Here, we derive a class of valid inequalities that generalize both types of previously introduced clique constraints. We formalize them as special classes of anti Tai mappings defined as follows.

. Heuristically, one can still use the clique constraints in (

Note that any pair (x,y),(x′,y′) satisfying (5) also satisfies (3), and hence the set of all such pairs form a subgraph of the graph G defined above. It follows that a maximum-weight si-antimatching can be used to provide a valid clique constraint for the Tai mapping problem. Motivated by this, we introduce a dynamic program that optimally solves the maximum-weight si-antimatching problem in time O(|V1|2|V2|2). We observe further that the same dynamic program can be combined with our optimal path-tree anti Tai mapping algorithm mentioned above (that is, when of the two trees is a path) to obtain a polynomially computable lower bound on the maximum-weight anti Tai mapping in the general case.

The rest of the paper is structured as follows. In Section 2, we study the properties of an si-antimatching and show that it induces a partition of the matched vertices in each tree into a path and an independent set such that the path in one tree is mapped (by the antimatching) to the independent set in the other and vice versa. We use this structural result to derive a dynamic program for computing a maximum-weight si-antimatching. In Section 3, we give a dynamic programming formulation for the anti Tai mapping problem between a tree and a path, and combine this result with our dynamic programming idea from Section 2 to give a dynamic program that provides a lower bound on the maximum-weight anti Tai mapping between two trees. We conclude in Section 4.

In this section, we present an efficient algorithm for this special case of anti Tai mapping. Surprisingly, si-antimatching turns out to be solvable in polynomial time and we provide a dynamic program that solves the problem directly on two unordered labeled trees T1 and T2 in time O(|V1|2|V2|2). Our dynamic program strongly relies on the decomposition theorem (Theorem 2.1) that states that every si-antimatching can be decomposed into an antichain and a path in T1, and a path and an antichain in T2 such that an antichain in T1 maps into a path in T2, and a path in T1 maps into an antichain in T2 (see Figure 3). We further argue that there exists an order in that decomposition which in turn provides the way of computing an entry in a dynamic table.

We will first show that si-antimatching can get nicely decomposed, which will form the basis for our algorithm.

Let M denote an si-antimatching and let P1 denote a maximal path in T1. Then VM1∖PM1 is an antichain, i.e. any two distinct nodes in VM1∖PM1 are incomparable.

Suppose the opposite, i.e. there exist x,y∈VM1∖PM1, x≠y, such that x∼y (see Figure 2). Since P1 is maximal, there must exist u,v∈PM1 such that u≁x, u≁y and v≁x, v≁y. Thus, nodes M(u) and M(v) must be comparable with nodes in M(x) and M(y). Hence, it must be that M(u),M(v)⊆[root(T2),LCA(M(x)∪M(y))], where the notation [⋅,⋅] denotes a path in a tree with a given start and end node, while LCA stands for a lowest common ancestor of a given set of nodes. Which is a contradiction with the fact that M(u) and M(v) cannot lie on a common path in T2. ∎

Let M denote si-antimatching. Then there exist a maximal path P1 such that all nodes in M(VM1∖PM1) lie on a root-to-leaf path in T2.

Now we are ready to state the main result of this section that immediately follows from previous lemmas:

In the following, we will explain our algorithm for the si-antimatching problem based on the decomposition theorem 2.1. Given si-antimatching M and for x∈A1 let l(x)∈P1 denote the lowest ancestor of x in P1. Analogously denote for x∈A2. We start by partitioning antichains into equivalence classes.

Let M denote si-antimatching, PM1,A1 and PM2,A2 partitioning of VM1 and VM2, respectively, and B and C equivalence classes of A1 and A2, respectively. Then for x∈PM1

Before stating the main result, note the following.

Let α(x,v,v′) be the weight of maximum weight antichain in the subtree rooted at vertex x with weight ∑z∈[v,v′]w(y,z) on vertex y∈τ(x). Then,

It should be noted that it is possible to implement the algorithm from theorem 2.3 with running time O(|V1|2|V2|2). Specifically, for a fixed v′∈τ(v)∖{v} the maximum weight antichains rooted in y∈c(x)∖[u,u′] are independent of eachother, allowing us to simply accumulate them while iterating through u′∈τ(u)∖{u}.

Running time of the algorithm presented by theorem 3.1 is O(|V1||V2|). We see this by noting that the dynamic program has O(|V1||V2|) states and that for a fixed y∈[u,v], computing all γ(x,u,y) amounts to a single tree traversal.

Theorem 2.3 therefore suggests a natural generalization of theorem 3.1 to the case of two arbitrary trees by simply replacing α with γ.

The algorithm of corollary 1 can be implemented with asymptotic running time of O(|V1|2|V2|2), analogously to the optimal si-antimatching algorithm of theorem 2.3. We provide a sample implementation at Blažević (2021). It is also worth noting, for practical purposes, that those algorithms admit a straightforward parallelization. Specifically, all v′∈τ(v)∖{v} can be checked in parallel.

In the following section, we will make two straightforward observations regarding generalizations of anti Tai mapping to more general directed acyclic graphs (DAGs). First note that theorem 3.1 cannot be extended to DAGs since it depends on sets of descendants of distinct children being disjoint. Observation 3.1 notes that we can, however, do somewhat better than falling back to computing anti Tai mapping on pairs of paths (as is done in Do et al. (2019)) by extending a path to an arbitrary topological ordering. Observation 3.2 relates maximum-weight anti Tai mapping to maximum weight antichain in the graph constructed by the product of two DAGs solving the problem when one of the DAGs is a path in polynomial time.

The observation follows from the fact that by definition of topological ordering we have i<j⟹vi<vj or vi incomparable with vj.

The observation follows from the fact that G is a transitively closed directed acyclic graph and {x,y} is an anti Tai mapping if and only if (x,y)∉E and (y,x)∉E.

In this paper we consider the problem of generating cutting planes for the natural integer programming formulation of the Tai mapping problem. Our cutting planes are based on finding a maximum-weight clique in a subgraph defined on the set of pairs of nodes of the two given trees, which we call an anti Tai mapping. For the special class of si-antimatching, we give a decomposition theorem that describes its precise structure and hence allows us to use dynamic programming to find the maximum-weight si-antimatching in O(|V1|2|V2|2) time. Inspired by this result, we also obtain a dynamic program that provides a polynomially computable lower bound on the maximum-weight anti Tai mapping. Whether the latter problem is NP-hard remains an interesting open question.