We investigate the problem of antenna selection (AS) in full-duplex (FD) cooperative non-orthogonal multiple access (NOMA) systems, where a multi-antenna FD relay assists transmission from a multi-antenna base station (BS) to a far user, while at the same, the BS transmits to a near user. Specifically, based on the end-to-end signal-to-interference-plus-noise ratio at the near and far users, two AS schemes to select a single transmit antenna at both the BS and the relay, respectively, as well as a single receive antenna at relay are proposed. In order to study the ergodic sum rate and outage probability of these AS schemes, we have derived closed-form expressions assuming Rayleigh fading channels. The sum rate and outage probability of the AS schemes are also compared with the optimum selection scheme that maximizes the performance as well as with a random AS scheme. Our results show that the proposed AS schemes can deliver a near-optimal performance for near and far users, respectively. 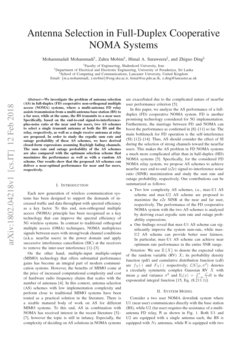 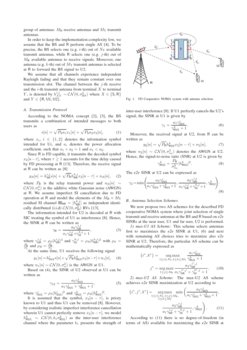 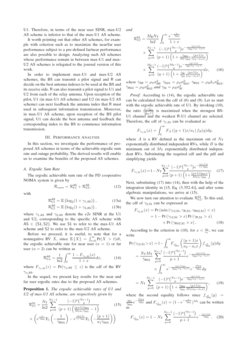 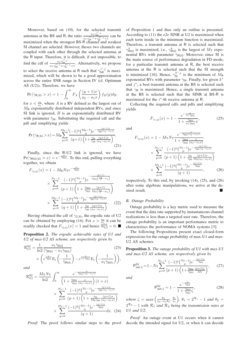 Each new generation of wireless communication systems has been designed to support the demands of increased traffic and data throughput with spectral efficiency as a key factor. To this end, non-orthogonal multiple access (NOMA) principle has been recognized as a key technology that can improve the spectral efficiency of 5G wireless systems. In contrast to traditional orthogonal multiple access (OMA) techniques, NOMA multiplexes signals between users with strong/weak channel conditions (a.k.a. near/far users) in the power domain and apply successive interference cancellation (SIC) at the receivers to remove the inter-user interference [1, 2, 3].

On the other hand, multiple-input multiple-output (MIMO) technology that offers substantial performance gains has become an integral part of modern communication systems. However, the benefits of MIMO come at the price of increased computational complexity and cost of hardware radio frequency chains that scales with the number of antennas [4]. In this context, antenna selection (AS) schemes with low implementation complexity and perform close to traditional MIMO systems have been touted as a practical solution in the literature. There is a sizable matured body of work on AS for different MIMO systems. To this end, AS in combination with NOMA has received interest in the recent literature [5, 6, 7], however the topic is still in infancy. Especially, the complexity of deciding on AS solutions in NOMA systems are exacerbated due to the complicated nature of near/far user performance criterion [5].

In this paper, we analyze the AS performance of a full-duplex (FD) cooperative NOMA system. FD is another promising technology considered for 5G implementation. Furthermore, the marriage between FD and NOMA can boost the performance as confirmed in [8, 9, 10, 11] so far. The main bottleneck for FD operation is the self-interference (SI) [12, 13, 14]. Thus, AS should consider the effect of SI during the selection of strong channels toward the near/far users. This makes the AS problem in FD NOMA systems a much more complicated affair than in half-duplex (HD) NOMA systems [5]. Specifically, for the considered FD NOMA relay system, we propose AS schemes to achieve near/far user end-to-end (e2e) signal-to-interference noise ratio (SINR) maximization and study the sum rate and outage probability, respectively. Our contributions can be summarized as follows:

to denote the expected value of the random variable (RV)

Consider a two user NOMA downlink system where U1 (near user) communicates directly with the base station (BS), while U2 (far user) requires the assistance of a multi-antenna FD relay, R as shown in Fig. 1. Both U1 and U2 are equipped with a single antenna each, the BS is equipped with NT antennas, while R is equipped with two group of antennas: MR receive antennas and MT transmit antennas.

We assume that all channels experience independent Rayleigh fading and that they remain constant over one transmission slot. The channel between the j-th receive and the i-th transmit antenna from terminal X to terminal Y, is denoted by hi,jXY∼CN(0,σ2XY) where X∈{S,R} and Y∈{R,U1,U2}.

According to the NOMA concept [2, 3], the BS transmits a combination of intended messages to both users as

where xi, i∈{1,2} denotes the information symbol intended for Ui, and ai denotes the power allocation coefficient, such that a1+a2=1 and a1<a2.

Since R is FD capable, it transmits the decoded symbol x2[n−τ], where τ≥1 accounts for the time delay caused by FD processing at R [13]. Therefore, the receive signal at R can be written as [8]

where PR is the relay transmit power and nR[n]∼CN(0,σ2n) is the additive white Gaussian noise (AWGN) at R. We assume imperfect SI cancellation due to FD operation at R and model the elements of the MR×MT residual SI channel HRR=[hk,jRR] as independent identically distributed (i.i.d) CN(0,σ2SI) RVs [13].

The information intended for U2 is decoded at R with SIC treating the symbol of U1 as interference [8]. Hence, the SINR at R can be written as

At the same time, U1 receives the following signal

Moreover, the received signal at U2, from R can be written as

The e2e SINR at U2 can be expressed as

We now propose two AS schemes for the described FD cooperative NOMA system where joint selection of single transmit and receive antennas at the BS and R based on e2e SINRs at the near user, U1 and far user, U2 is performed.

This scheme selects antennas first to maximizes the e2e SINR at U1, (6) and next with remaining AS choices tries to maximize also e2e SINR at U2. Therefore, the particular AS scheme can be mathematically expressed as

e2e SINR at U1. Therefore, in terms of the near user SINR, max-U2 AS scheme is inferior to that of the max-U1 AS scheme.

It worth pointing out that other AS schemes, for example with criterion such as to maximize the near/far user performance subject to a pre-defined far/near performance are also possible to design. Analyzing such AS schemes whose performance remain in between max-U1 and max-U2 AS schemes is relegated to the journal version of this work.

In order to implement max-U1 and max-U2 AS schemes, the BS can transmit a pilot signal and R can decide on the best antenna indexes to be used at the BS and its receive side. R can also transmit a pilot signal to U1 and U2 from each of the relay antenna. Upon reception of the pilot, U1 (in max-U1 AS scheme) and U2 (in max-U2 AS scheme) can next feedback the antenna index that R must used in subsequent information transmission. Moreover, in max-U1 AS scheme, upon reception of the BS pilot signal, U1 can decide the best antenna and feedback the corresponding index to the BS to commence information transmission.

Before we proceed, it is useful, to note that for a nonnegative RV X, since E{X}=∫∞t=0Pr(X>t)dt, the ergodic achievable rate for near user (u=1) or far user (u=2) can be written as

In the sequel, we present key results for the near and far user ergodic rates due to the proposed AS schemes.

The ergodic achievable rates of U1 and U2 of max-U1 AS scheme, are respectively given by

We now turn our attention to evaluate RS1U2. To this end, the cdf of γ2,S1 can be expressed as

Moreover, based on (II-B1), for the selected transmit antennas at the BS and R, the ratio a2γi∗,jSRa1γi∗,jSR+γk∗,jSI+1 can be maximized when the strongest BS-R channel and weakest SI channel are selected. However, theses two channels are coupled with each other through the selected antenna at the R input. Therefore, it is difficult, if not impossible, to find the cdf of a2γi∗,jSRa1γi∗,jSR+γk∗,jSI+1. Alternatively, we propose to select the receive antenna at R such that γi∗,jSR is maximized, which will be shown to be a good approximation across the entire SNR range in Section IV (cf. Optimum AS (U2)). Therefore, we have

Finally, since the R-U2 link is ignored, we have . To this end, pulling everything together, we obtain

The ergodic achievable rates of U1 and U2 of max-U2 AS scheme, are respectively given by

Collecting the required cdfs and pdfs and simplifying yields

respectively. To this end, by invoking (14), (25), and (III-A) after some algebraic manipulations, we arrive at the desired result. ■

The outage probability of U1 with max-U1 and max-U2 AS scheme, are respectively given by

Proof: An outage event at U1 occurs when it cannot decode the intended signal for U2, or when it can decode it but fails to decode its own signal. Therefore, the outage probability of U1 can be derived as

The outage probability of U2 with max-U1 and max-U2 AS scheme, are respectively given by

Proof: An outage event at U2 occurs if R fails to decode the intended message to U2, or R can decode U2 signal but U2 fails to decode its message. Therefore, the outage probability of U2 can be expressed as

To this end by substituting the corresponding probabilities presented in subsection III-A into (III-B), we arrive at (30) and (31). ■

In this section, we present numerical results to quantify the performance gains when max-U1 and max-U2 AS schemes are adopted in the considered FD cooperative NOMA system. We set a1=0.25, a2=0.75 and k1=0.01.

which its range is the interval [12,1]. In this interval, J=12 corresponds to the least fair allocation in which only one user receives a non-zero rate, and J=1 corresponds to the fairest allocation in which both near and far user receive the same rate. From Fig. 4 We see that in the low SNR region, Optimum AS scheme achieves the best user fairness out of all AS schemes. However, max-U2 AS scheme can provide a better user fairness in medium-to-high SNR regimes and hence can balance the tradeoff between the ergodic rate and user fairness.