And the Winner is ...: Bayesian Twitter-based Prediction on 2016 U.S. Presidential Election

This paper describes a Naive-Bayesian predictive model for 2016 U.S. Presidential Election based on Twitter data. We use 33,708 tweets gathered since December 16, 2015 until February 29, 2016. We introduce a simpler data preprocessing method to label the data and train the model. The model achieves 95.8 Sanders as Republican and Democratic nominee respectively. It achieves a comparable result to those in its competitor methods. 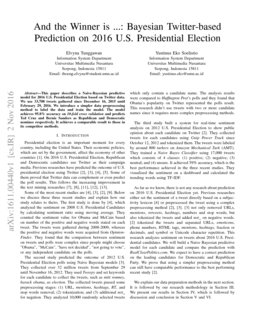 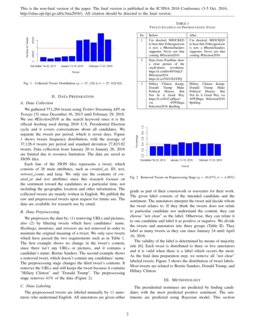 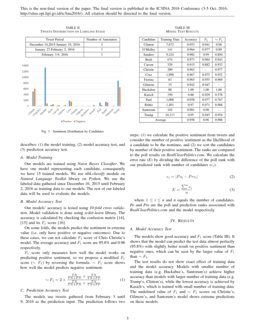 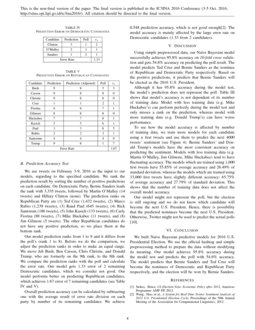 Twitter has been proven to be a notable source for predictive modelling ...
Stylianos Kampakis, et al. ∙

This paper describes an application of Bayesian programming to the contr...
Gabriel Synnaeve, et al. ∙

Our entry into the HAHA 2019 Challenge placed 3^rd in the classification...
Bobak Farzin, et al. ∙

Presidential election is an important moment for every country, including the United States. Their economic policies, which are set by the government, affect the economy of other countries

[1]. On 2016 U.S. Presidential Election, Republican and Democratic candidates use Twitter as their campaign media. Previous researches have predicted the outcome of U.S. presidential election using Twitter [2, 3, 4, 5]. Some of them proved that Twitter data can complement or even predict the poll results. This follows the increasing improvement in the text mining researches [7, 8, 11, 12, 13].

Some of the most recent studies are [4, 3, 2, 9]. Below we discuss these three recent studies and explain how our study relates to theirs. The first study is done by [4], which analyzed the sentiment on 2008 U.S. Presidential Candidates by calculating sentiment ratio using moving average. They counted the sentiment value for Obama and McCain based on number of the positive and negative words stated on each tweet. The tweets were gathered during 2008-2009, whereas the positive and negative words were acquired from OpinionFinder. They found that the comparison between sentiment on tweets and polls were complex since people might choose ”Obama”, ”McCain”, ”have not decided”, ”not going to vote”, or any independent candidate on the polls.

The second study predicted the outcome of 2012 U.S. Presidential Election polls using Naive Bayesian models [3]. They collected over 32 million tweets from September 29 until November 16, 2012. They used Tweepy and set keywords for each candidate to collect the tweets, such as mitt romney, barack obama, us election. The collected tweets passed some preprocessing stages: (1) URL, mentions, hashtags, RT, and stop words removal; (2) tokenization; and (3) additional not_ for negation. They analyzed 10,000 randomly selected tweets which only contain a candidate name. The analysis results were compared to Huffington Post’s polls and they found that Obama’s popularity on Twitter represented the polls result. This research didn’t use tweets with two or more candidate names since it requires more complex preprocessing methods.

The third study built a system for real-time sentiment analysis on 2012 U.S. Presidential Election to show public opinion about each candidate on Twitter

[2]. They collected tweets for each candidates using Gnip Power Track since October 12, 2012 and tokenized them. The tweets were labeled by around 800 turkers on Amazon Mechanical Turk (AMT). They trained a Naive Bayes Classifier using 17,000 tweets which consists of 4 classes: (1) positive; (2) negative; (3) neutral; and (4) unsure. It achieved 59% accuracy, which is the best performance achieved in the three recent studies. They visualized the sentiment on a dashboard and calculated the trending words using TF-IDF.

As far as we know, there is not any research about prediction on 2016 U.S. Presidential Election yet. Previous researches either set the sentiment of a tweet directly based on a subjectivity lexicon

[4] or preprocessed the tweet using a complex preprocessing method [2, 3]. [3] not only removed URLs, mentions, retweets, hashtags, numbers and stop words; but also tokenized the tweets and added not_ on negative words. [2] tokenized the tweets and separated URLs, emoticons, phone numbers, HTML tags, mentions, hashtags, fraction or decimals, and symbol or Unicode character repetition. This research analyzes sentiment on tweets about 2016 U.S. Presidential candidates. We will build a Naive Bayesian predictive model for each candidate and compare the prediction with RealClearPolitics.com. We expect to have a correct prediction on the leading candidates for Democratic and Republican Party. We prove that using a simpler preprocessing method can still have comparable performance to the best performing recent study [2].

used during 2016 U.S. Presidential Election cycle and it covers conversations about all candidates. We separate the tweets per period, which is seven days. Figure 1 shows tweets frequency distribution, with the average of 37,126.4 tweets per period and standard deviation 27,823.82 tweets. Data collection from January 20 to January 26, 2016 are limited due to resource limitation. The data are saved as JSON files.

Each line of the JSON files represents a tweet, which consists of 26 main attributes, such as created_at, ID, text, retweet_count, and lang. We only use the contents of created_at and text attributes since this research focuses on the sentiment toward the candidates in a particular time, not including the geographic location and other information. The collected tweets are mainly written in English. We publish the raw and preprocessed tweets upon request for future use. The data are available for research use by email.

We preprocess the data by: (1) removing URLs and pictures, also (2) by filtering tweets which have candidates’ name. Hashtags, mentions, and retweets are not removed in order to maintain the original meaning of a tweet. We only save tweets which have passed the two requirements such as in Table 1. The first example shows no change in the tweet’s content, since there isn’t any URLs or pictures, and it contains a candidate’s name: Bernie Sanders. The second example shows a removed tweet, which doesn’t contain any candidates’ name. The preprocessing stage changes the third tweet’s contents. It removes the URLs and still keeps the tweet because it contains ”Hillary Clinton” and ”Donald Trump”. The preprocessing stage removes 41% of the data (Figure 2).

The preprocessed tweets are labeled manually by 11 annotators who understand English. All annotators are given either grade as part of their coursework or souvenirs for their work. The given label consists of the intended candidate and the sentiment. The annotators interpret the tweet and decide whom the tweet relates to. If they think the tweets does not relate to particular candidate nor understand the content, they can choose ”not clear” as the label. Otherwise, they can relate it to one candidate and label it as positive or negative. We divide the tweets and annotators into three groups (Table II). They label as many tweets as they can since January 24 until April 16, 2016.

The validity of the label is determined by means of majority rule [6]. Each tweet is distributed to three or five annotators and it is valid when there is a label which occurs the most. As the final data preparation step, we remove all ”not clear” labeled tweets. Figure 3 shows the distribution of tweet labels. Most tweets are related to Bernie Sanders, Donald Trump, and Hillary Clinton.

Our models are trained using Naive Bayes Classifier. We have one model representing each candidate, consequently we have 15 trained models. We use nltk.classify module on Natural Language Toolkit library on Python. We use the labeled data gathered since December 16, 2015 until February 2, 2016 as training data to our models. The rest of our labeled data will be used to evaluate the models.

library. The accuracy is calculated by checking the confusion matrix

On some folds, the models predict the sentiment in extreme value (i.e. only have positive or negative outcomes). Due to these cases, we can not calculate F1 score of Chris Christie’s model. The average accuracy and F1 score are 95.8% and 0.96 respectively.

where 1≤\emphi≤\emphn and n equals the number of candidates. Po and Pre are the poll and prediction ranks associated with RealClearPolitics.com and the model respectively.

The models show good accuracy and F1 score (Table III). It shows that the model can predict the test data almost perfectly (95.8%) with slightly better result on positive sentiment than negative ones, which can be seen by the larger value of F1 than ∼F1.

We use tweets on February 3-9, 2016 as the input to our models, regarding to the specified candidate. We rank the prediction result by sorting the number of positive predictions on each candidate. On Democratic Party, Bernie Sanders leads the rank with 3,335 tweets, followed by Martin O’Malley (14 tweets) and Hillary Clinton (none). The prediction ranks on Republican Party are (1) Ted Cruz (1,432 tweets), (2) Marco Rubio (1,239 tweets), (3) Rand Paul (645 tweets), (4) Rick Santorum (186 tweets), (5) John Kasich (133 tweets), (6) Carly Fiorina (88 tweets), (7) Mike Huckabee (11 tweets), and (8) Jim Gilmore (5 tweets). The other Republican candidates do not have any positive prediction, so we place them at the bottom rank.

Our model prediction ranks from 1 to 9 and it differs from the poll’s (rank 1 to 8). Before we do the comparison, we adjust the prediction ranks in order to make an equal range. We move Jeb Bush, Ben Carson, Chris Christie, and Donald Trump, who are formerly on the 9th rank, to the 8th rank. We compare the prediction ranks with the poll and calculate the error rate. Our model gets 1.33 error of 2 remaining Democratic candidates, which we consider not good. Our model performs better on predicting Republican candidates, which achieves 1.67 error of 7 remaining candidates (see Table IV and V).

Using simple preprocessed data, our Naive Bayesian model successfully achieves 95.8% accuracy on 10-fold cross validation and gets 54.8% accuracy on predicting the poll result. The model predicts Ted Cruz and Bernie Sanders as the nominee of Republican and Democratic Party respectively. Based on the positive predictions, it predicts that Bernie Sanders will be elected as the 2016 U.S. President.

We built Naive Bayesian predictive models for 2016 U.S. Presidential Election. We use the official hashtag and simple preprocessing method to prepare the data without modifying its meaning. Our model achieves 95.8% accuracy during the model test and predicts the poll with 54.8% accuracy. The model predicts that Bernie Sanders and Ted Cruz will become the nominees of Democratic and Republican Party respectively, and the election will be won by Bernie Sanders.