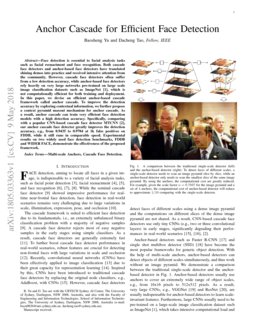 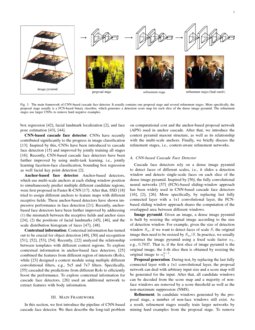 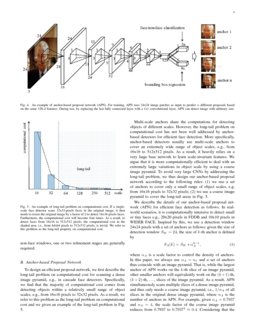 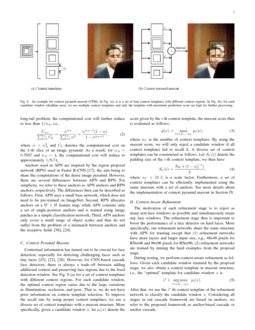 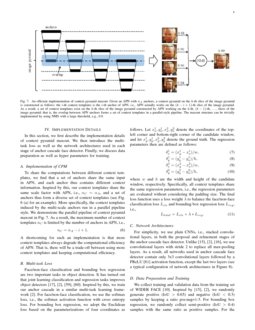 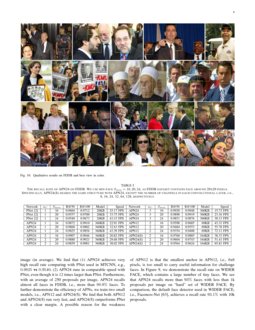 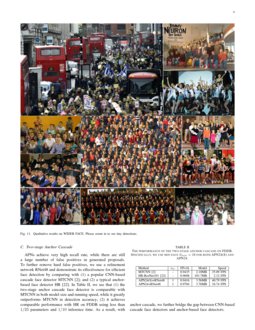 Face detection, aiming to locate all faces in a given image, is indispensable to a variety of facial analysis tasks, such as facial point detection [3], facial reenactment [4, 5], and face recognition [6, 7, 8]. While the seminal cascade face detector [9] showed impressive performance for real-time near-frontal face detection, face detection in real-world scenarios remains very challenging due to large variations in scale, illumination, expression, pose, and occlusion [10].

The cascade framework is suited to efficient face detection due to its fundamentals, i.e., an extremely unbalanced binary classification problem with a majority of negative samples [9]

Although anchor cascade is computationally efficient, it still fails to recall some difficult faces such as tiny faces and those in profile. However, this can be addressed by exploring the contextual information, i.e., the areas surrounding the face region [25, 22, 26]. Intuitively, for a fixed detection window, e.g., 24x24 pixels, additional context will always squeeze the face region. On the one hand, additional context such as face contours and ears are crucial for detecting low-resolution faces or faces in profile; On the other hand, face parts such as the eyes, nose, and mouth, help detect partially occluded faces [27]. As a result, there will be a trade-off between adding additional context and preserving face region. Since the optimal context ratio for each candidate window is not available, we propose a maxout structure based on a diverse set of context templates. More specifically, for each candidate window, we use multiple different context templates, i.e., the context region increases with a fixed scale factor, and a candidate window is rejected only if all context templates fail to recall it. Considering that all context templates forms in a pyramid, we refer to this maxout structure as context pyramid maxout (CPM). As a result, we greatly improve the detection accuracy, especially on difficult faces. Specifically, the context pyramid maxout structure can be efficiently implemented using a parallel-style pipeline (see details in Section III-C and IV).

Anchor-based face detector. Anchor-based detectors, which use multi-scale anchors at each sliding window position to simultaneously predict multiple different candidate regions, were first proposed in Faster R-CNN [17]. After that, SSD [18] tried to assign different anchors to feature maps with different receptive fields. These anchor-based detectors have shown impressive performance in face detection [21]. Recently, anchor-based face detectors have been further improved by addressing (1) the mismatch between the receptive fields and anchor sizes [24], (2) the positions of facial landmarks [45, 46], and the scale distribution histogram of faces [47, 48].

In this section, we first introduce the pipeline of CNN-based cascade face detector. We then describe the long-tail problem on computational cost and the anchor-based proposal network (APN) used in anchor cascade. After that, we introduce the context pyramid maxout structure, as well as its relationship with the multi-scale anchors. Finally, we briefly discuss the refinement stages, i.e., context-aware refinement networks.

Cascade face detectors rely on a dense image pyramid to detect faces of different scales, i.e., it slides a detection window and detects single-scale faces on each slice of the dense image pyramid. Inspired by [56], the fully convolutional neural networks [57] (FCN)-based sliding-window approach has been widely used in CNN-based cascade face detectors [16, 2, 26]. More specifically, by replacing last fully connected layer with a 1x1 convolutional layer, the FCN-based sliding window approach shares the computation of the overlapped area between different windows.

Proposal generation. During test, by replacing the last fully connected layer with a 1x1 convolutional layer, the proposal network can deal with arbitrary input size and a score map will be generated for the input. After that, all candidate windows can be decoded from the score map and a majority of non-face windows are removed by a score threshold as well as the non-maximum suppression (NMS).

Multi-scale anchors share the computations for detecting objects of different scales. However, the long-tail problem on computational cost has not been well addressed by anchor-based detectors for efficient face detection. More specifically, anchor-based detectors usually use multi-scale anchors to cover an extremely wide range of object scales, e.g., from 16x16 to 512x512 pixels. As a result, it heavily relies on a very large base network to learn scale-invariant features. We argue that it is more computationally efficient to deal with an extremely large variations in object scale by using a coarse image pyramid. To avoid very large CNNs by addressing the long-tail problem, we thus design our anchor-based proposal network according to the following rules: (1) we use a set of anchors to cover only a small range of object scales, e.g, from 16x16 pixels to 32x32 pixels; (2) we use a coarse image pyramid to cover the long-tail areas in Fig. 5.

We describe the details of our anchor-based proposal network (APN) for efficient face detection as follows. In real-world scenarios, it is computationally intensive to detect small or tiny faces e.g., 20x20 pixels in FDDB and 10x10 pixels in WIDER FACE. Inspired by this, we use a detection window 24x24 pixels with a set of anchors as follows: given the size of detection window SW=24, the size of k-th anchor is defined by

Anchors used in APN are inspired by the region proposal network (RPN) used in Faster R-CNN [17], the aim being to share the computations of the dense image pyramid. However, there are several differences between APN and RPN. For simplicity, we refer to these anchors as APN anchors and RPN anchors, respectively. The differences then can be described as follows. First, APN uses a small base network, which does not need to be pre-trained on ImageNet; Second, RPN allocates anchors on a W×H feature map, while APN contains only a set of single-position anchors and is trained using image patches as a simple classification network; Third, APN anchors only cover a small range of object scales and thus do not suffer from the problem of a mismatch between anchors and the receptive fields [58, 24].

Contextual information has turned out to be crucial for face detection, especially for detecting challenging faces such as tiny faces [25, 22, 26]. However, for CNN-based cascade face detectors, there is always a trade-off between adding additional context and preserving face regions due to the fixed detection window. See Fig. 6 (a) for a set of context templates with different context regions. For each candidate window, the optimal context region varies due to the large variations in illumination, occlusion, and pose. That is, we do not have prior information on context template selection. To improve the recall rate by using proper context templates, we use a diverse set of context templates with a maxout structure. More specifically, given a candidate window x, let pi(x) denote the score given by the i-th context template, the maxout score then is evaluated as follows:

denote the padding size of the

i-th context template, we then have

where αC∈(0,1] is a scale factor. Furthermore, a set of context templates can be efficiently implemented using the same structure with a set of anchors. See more details about the implementation of context pyramid maxout in Section IV.

During testing, we perform context-aware refinement as follows. Given each candidate window retained by the proposal stage, we also obtain a context template in maxout structure, i.e., the “optimal” template for candidate window x is

After that, we use the i∗-th context template of the refinement network to classify the candidate window x. Considering all stages in our cascade framework are based on anchors, we refer to the proposed framework as anchor-based cascade or anchor cascade.

In this section, we first describe the implementation details of context pyramid maxout. We then introduce the multi-task loss as well as the network architectures used in each stage of anchor cascade face detector. Finally, we discuss data preparation as well as hyper parameters for training.

. For face/non-face classification, we use the softmax loss, i.e., the softmax activation function with cross entropy loss. For bounding box regression, we adopt the Euclidean loss based on the parameterizations of four coordinates as follows. Let

x1a,y1a,x2a,y2a denote the coordinates of the top-left corner and bottom-right corner of the candidate window, and let x1g,y1g,x2g,y2g denote the ground truth. The regression parameters then are defined as follows:

where w and h

For simplicity, we use plain CNNs, i.e., stacked convolutional layers, in both the proposal and refinement stages of the anchor cascade face detector. Unlike [15, 2, 16]

[61] activation function, except the last two layers (see a typical configuration of network architectures in Figure 8).

The proposed anchor cascade is implemented using a customized Caffe

In this section, we first briefly introduce two widely used benchmarks in face detection, FDDB [28] and WIDER FACE [10]. We then conduct a number of experiments to demonstrate the effectiveness of the proposed anchor cascade framework.

FDDB contains 2,845 images with 5,171 faces. For FDDB evaluations, we follow the “unrestricted training” setting, i.e., we use all ten folds of the dataset as validation data without performing 10-fold cross-validation.

WIDER FACE contains 32,203 images with 393,793 faces, of which 40% are used for training, 10% for validation, and 50% for testing. According to the detection rate, the validation data are divided into three classes: “easy”, “medium”, and “hard”. We train all our models using the training set and test on the validation set.

In this experiment, we train several APNs using input size 12x12 and 24x24 pixels, i.e., APN12 and APN24, respectively. To demonstrate effectiveness of APNs for proposal generation, we compare the recall rate of APNs under different number of proposals. More specifically, in Table I, we evaluate the recall rate on FDDB using 50 and 100 proposals per image (in average). We find that (1) APN24 achieves very high recall rate comparing with PNet used in MTCNN, e.g., 0.9825 vs 0.9540; (2) APN24 runs in comparable speed with PNet, even though it is 12 times larger than PNet. Furthermore, with an average of 250 proposals per image, APN24 recalls almost all faces in FDDB, i.e., more than 99.9% faces. To further demonstrate the efficiency of APNs, we train two small models, i.e., APN12 and APN24(S). We find that both APN12 and APN24(S) run very fast, and APN24(S) outperforms PNet with a clear margin. A possible reason for the weakness of APN12 is that the smallest anchor in APN12, i.e., 6x6 pixels, is too small to carry useful information for challenge faces. In Figure 9, we demonstrate the recall rate on WIDER FACE, which contains a large number of tiny faces. We see that APN24 recalls more than 93% faces with less than 1k proposals per image on “hard” set of WIDER FACE. By comparison, the default face detector used in WIDER FACE, i.e., Faceness-Net [63], achieves a recall rate 93.1% with 10k proposals.

APNs achieve very high recall rate, while there are still a large number of false positives in generated proposals. To further remove hard false positives, we use a refinement network RNet48 and demonstrate its effectiveness for efficient face detection by comparing with (1) a popular CNN-based cascade face detector MTCNN [2]; and (2) a typical anchor-based face detector HR [22]. In Table II, we see that (1) the two-stage anchor cascade face detector is comparable with MTCNN in both model size and running speed, while it greatly outperforms MTCNN in detection accuracy; (2) it achieves comparable performance with HR on FDDB using less than 1/25 parameters and 1/10 inference time. As a result, with anchor cascade, we further bridge the gap between CNN-based cascade face detectors and anchor-based face detectors.