Millions of network cameras are streaming real-time multimedia content (images or videos) for various environments (e.g., highways and malls) and can be used for a variety of applications. Analyzing the content from many network cameras requires significant amounts of computing resources. Cloud vendors offer resources in the form of cloud instances with different capabilities and hourly costs. Some instances include GPUs that can accelerate analysis programs. Doing so incurs additional monetary cost because instances with GPUs are more expensive. It is a challenging problem to reduce the overall monetary cost of using the cloud to analyze the real-time multimedia content from network cameras while meeting the desired analysis frame rates. This paper describes a cloud resource manager that solves this problem by estimating the resource requirements of executing analysis programs using CPU or GPU, formulating the resource allocation problem as a multiple-choice vector bin packing problem, and solving it using an existing algorithm. The experiments show that the manager can reduce up to 61% of the cost compared with other allocation strategies. 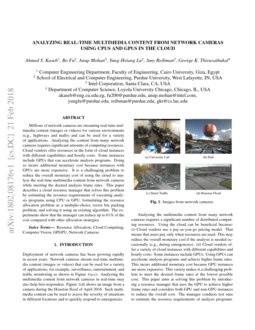 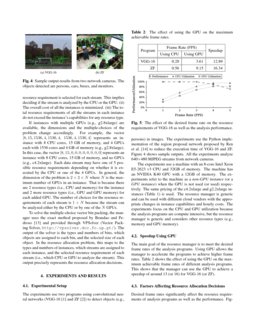 Analyzing the multimedia content from many network cameras requires a significant number of distributed computing resources. Using the cloud can be beneficial because: (i) Cloud vendors use a pay-as-you-go pricing model. That means that users pay only when resources are used. This may reduce the overall monetary cost if the analysis is needed occasionally (e.g., during emergencies). (ii) Cloud vendors offer a variety of cloud instances with different capabilities and hourly costs. Some instances include GPUs. Using GPUs can accelerate analysis programs and achieve higher frame rates. This incurs additional monetary cost because GPU instances are more expensive. This variety makes it a challenging problem to meet the desired frame rates at the lowest possible cost. This paper aims at solving this problem by introducing a resource manager that uses the GPU to achieve higher frame rates and considers both GPU and non-GPU instances to reduce the overall cost. The manager conducts test runs to estimate the resource requirements of analysis programs. The manager formulates the resource allocation problem as a multiple-choice vector bin packing problem to decide what instance types to use, how many instances to allocate, which data streams to assign to which instances, and which CPU or GPU to analyze the data streams.

[1] and ZF [2]) to detect objects (e.g., persons) in images. The experiments show that the manager can use the GPU to achieve speedup of around 13 (or 16) for VGG-16 (or ZF) and also reduce the cost. This paper has the following contributions:

The visual data from many network cameras is publicly available through many sources, such as Departments of Transportation (e.g., http://www.ohgo.com/). This data can be used for many applications, such as weather detection [3] and surveillance [4]. Several systems have been developed for analyzing the visual data from cameras, such as IBM Smart Surveillance System [5] and CAM2 [6].

Zhu et al. [7] explained the advantages of using cloud for multimedia applications. Kaseb et al. [8] proposed a resource manager to reduce the cost of analyzing the data from cameras, but do not consider GPU resources. GPUs can be used to accelerate general purpose computation, such as image processing and computer vision [9]

3. Frame Sizes: Different cameras provide streams with different frame sizes (e.g., 640×480). Higher frame sizes require higher resource requirements. The effect of the frame size on the resource requirements of an analysis program depends on the time complexity and the space complexity of the program. Since the resource manager assumes no prior knowledge about analysis programs, the manager repeats the test runs for each unique frame size. Fortunately, there are only a few common frame sizes among network cameras.

4. Types and Costs of Cloud Instances: Cloud vendors offer many instances with different capabilities and hourly costs. Table 1 shows the capabilities and hourly costs of some Amazon EC2 instance types with and without GPUs. The table shows that GPU instances (i.e., g2.2xlarge and g2.8xlarge) are more expensive than non-GPU instances (i.e., c2.2xlarge and c2.8xlarge). The manager decides the types and number of instances needed to meet the desired frame rates at the lowest possible cost.

To make the resource allocation decisions shown in Figure 2, this paper formulates resource allocation as a multiple-choice vector bin packing problem. In this problem [13], a bin has a cost and a multidimensional size. An object may have one of several possible sizes (multiple choices). The goal is to pack all the objects into bins such that: (i) One size is selected for each object. (ii) The overall cost of the used bins is minimized. (iii) The total size of the objects in each bin does not exceed its size in any dimension. Figure 3 shows an example of a multiple-choice 3D bin packing problem.

Similarly, in the resource allocation problem, each instance has an hourly cost and a vector representing its resource capabilities (i.e., CPU, memory, GPU, and GPU memory). For example, the vector [8,15,0,0] represents a non-GPU instance with 8 CPU cores, 15 GB of memory, and no GPUs (e.g., c4.2xlarge). The vector [8,15,1536,4] represents a GPU-instance instance with 8 CPU cores, 15 GB of memory, and a single GPU with 1536 cores and 4 GB of memory (e.g., g2.2xlarge). Each data stream may have one of two possible resource requirements depending on whether it is executed by the CPU or the GPU. For example, the resource requirements of a program may be represented by the vector [4,0.75,0,0] or [0.8,0.45,153.6,0.28] if the program is executed by the CPU or the GPU respectively. This means that if c4.2xlarge executes this program, the CPU utilization would be 50% (i.e., 4/8). If g2.2xlarge executes this program using the GPU, the CPU utilization would drop to 10% (i.e., 0.8/8) and the GPU utilization would be 10% (i.e., 153.6/1536). The goal is to assign all the streams to instances such that: (i) One resource requirement is selected for each stream. This implies deciding if the stream is analyzed by the CPU or the GPU. (ii) The overall cost of all the instances is minimized. (iii) The total resource requirements of all the streams in each instance do not exceed the instance’s capabilities for any resource type.

To solve the multiple-choice vector bin packing, the manager uses the exact method proposed by Brandao and Pedroso [13] and provided through VPSolver (Vector Packing Solver, http://vpsolver.dcc.fc.up.pt/). The output of the solver is the types and numbers of bins, which objects are assigned to each bin, and the selected size of each object. In the resource allocation problem, this maps to the types and numbers of instances, which streams are assigned to each instance, and the selected resource requirement of each stream (i.e., which CPU or GPU to analyze the stream). This output precisely represents the resource allocation decisions.

The experiments use two programs using convolutional neural networks (VGG-16 [1] and ZF [2]) to detect objects (e.g., persons) in images. The experiments use the Python implementation of the region proposal network proposed by Ren et al. [14] to reduce the execution time of VGG-16 and ZF. Figure 4 shows sample outputs. All the experiments analyze 640×480 MJPEG streams from network cameras.

The experiments use a machine with an 8-core Intel Xeon E5-2623 v3 CPU and 32GB of memory. The machine has an NVIDIA K40 GPU with a 12GB of memory. The experiments refer to the machine as a non-GPU instance (or a GPU instance) when the GPU is not used (or used) respectively. The same pricing of the c4.2xlarge and g2.2xlarge instances (Table 1) is used. The resource manager is generic and can be used with different cloud vendors with the appropriate changes in instance capabilities and hourly costs. The experiments focus on the CPU and GPU utilization because the analysis programs are compute intensive, but the resource manager is generic and considers other resource types (e.g., memory and GPU memory).

To evaluate the allocation strategy of the manager described in this paper, we compare it with two different strategies as shown in Table 4. All the strategies benefit from the ability of the manager to estimate the resource requirements of different analysis programs, to formulate the problem as a multiple-choice vector bin packing problem, and to solve it. For ST1 (or ST2), there is a single choice for the resource requirements of each program because only non-GPU (or GPU) instances are considered. The manager described in this paper uses ST3 which considers both non-GPU and GPU instances, hence, two choices of resource requirements exist for each program.

In order to compare the three strategies, we use the three scenarios described in Table 5. The table shows the programs, frame rates, and the number of data streams being analyzed in each scenario. Table 6 shows the types and numbers of instances determined by each strategy to handle each scenario:

Scenario 2: The CPU and GPU requirements of VGG-16 at 0.2 FPS and ZF at 0.5 FPS are low such that a single instance can handle the two streams at the same time. ST1 and ST3 use a single non-GPU instance and either of them saves 36% of the overall hourly cost compared with ST2 which uses a single GPU instance.

These experiments demonstrate that different resource allocation strategies are best in different scenarios according to several factors, such as analysis programs and frame rates. The strategy used by the resource manager described in this paper considers both GPU and non-GPU instances and always has the lowest cost compared with the other strategies.

This paper describes a resource manager that reduces the monetary cost of using the cloud to analyze real-time multimedia content from network cameras while meeting the desired analysis frame rates. The manager uses GPU to achieve higher frame rates and considers both GPU and non-GPU instances to reduce the overall cost. The manager formulates the resource allocation problem as a multiple-choice vector bin packing problem and solves it using an existing algorithm. The experiments show that the manager can reduce up to 61% of the cost compared with other allocation strategies.

The authors would like to thank the organizations that provide the camera data. A complete list of the data sources is available at https://www.cam2project.net/ack/. This project is supported in part by National Science Foundation ACI-1535108, CNS-0958487, and OISE-1427808. Any opinions, findings, and conclusions or recommendations expressed in this material are those of the authors and do not necessarily reflect the views of the sponsors.