Cause of a rapid increase in technological development, increasing identity theft, consumer fraud, the threat to personal data is also increasing every day. Methods developed earlier to ensure personal the information from the thefts was not effective and safe. Biometrics were introduced when it was needed technology for more efficient security of personal information. Old-fashioned traditional approaches like Personal identification number( PIN), passwords, keys, login ID can be forgotten, stolen or lost. In biometric authentication system, user may not remember any passwords or carry any keys. As people they recognize each other by the physical appearance and behavioral characteristics that biometric systems use physical characteristics, such as fingerprints, facial recognition, voice recognition, in order to distinguish between the actual user and scammer. In order to increase safety in 2005, biometric identification methods were developed government and business sectors, but today it has reached almost all private sectors as Banking, Finance, home security and protection, healthcare, business security and security etc. Since biometric samples and templates of a biometric system having one biometric character to detect and the user can be replaced and duplicated, the new idea of merging multiple biometric identification technologies has so-called multimodal biometric recognition systems have been introduced that use two or more biometric data characteristics of the individual that can be identified as a real user or not. 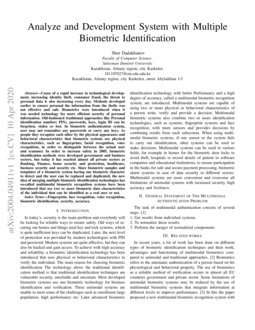 In today’s, security is the main problem and everybody will be looking for reliable ways to ensure safety. Old ways of securing our homes and things used key and lock systems, which is quite inefficient keys can be duplicated. Later, the next level of protection was provided by modern technologies with PIN and password. Modern systems are quite effective, but they can also be hacked and gain access. To achieve with high accuracy and reliability, a biometric identification technology has been introduced that uses physical or behavioral characteristics to verify the individual. The main reason for choosing biometric identification The technology above the traditional identification method is that traditional identification techniques are vulnerable security, unreliable and uncertain. Most developed biometric systems use one biometric technology for biomass identification and verification. These unimodal systems are unable to meet some of the challenges such as enrollment large population, high performance etc. Later advanced biometric identification technology with better Performance and a high degree of accuracy, called a multimodal biometric recognition system, are introduced. Multimodal systems are capable of using two or more physical or behavioral characteristics of a person write, verify and provide a decision. Multimodal biometric systems also combine two or more identification technologies, such as systems, fingerprint systems and face recognition, with more sensors and provides decisions by combining results from each subsystem. When using multimodal biometric systems, if one sensor or the system fails to carry out identification, other systems can be used to make decisions. Multimodal systems can be used in various fields, for example in homes for the biometric door locks to avoid theft, hospitals to record details of patient in software companies and educational institutions, to ensure participation in the banks for safe and secure payment processing, biometric alarm systems in case of data security in different sectors. Multimodal systems are more convenient and overcome all limitations of unimodal systems with increased security, high accuracy and liveliness.

The task of multimodal authentication consists of several steps:[1] 1. Get results from individual systems. 2. To normalize these results. 3. Perform the merger of normalized components.

In recent years, a lot of work has been done on different types of biometric identification techniques and their work, advantages and functioning of multimodal biometrics compared to unimodal and traditional approaches.[2] Biometrics refers to the automatic authentication of a person based on his physiological and behavioral property. The use of biometrics as a reliable method of verification occurs in almost all EU countries government and private sector. Some limitations of unimodal biometric systems may be reduced by the use of multimodal biometric systems that integrate information at different levels to improve performance.[3]

In this the paper proposed a new multimodal biometric recognition system with a fusion of fingerprints and irises recognition to achieve higher accuracy. The main goal of this work is to show that the merger of unrelated, independent identification techniques achieve better accuracy than any unimodal biometric systems. Output scores from two different systems merge into a single score at the score level using three standardizations methods and four Fusion approaches. They also used standardization steps to transform unrelated, different scores to the common scale of the two techniques. In this article, they told about the types of mergers level in biometric systems. Sensor level, function level, score level are types of Fusion levels. First step on the score level is the normalization of the score, when the scores are transformed into a common format. Step two the Fusion level has two categories, such as classification and combination. Classification approach classifies decisions to a cheater or real. Combined approach combines score multiple decisions into one comparative score. The accuracy achieved by this work is more than 60 percentage.

[4] By this article, I understand that a merger at the rank level can be a fairly new merger access. Fusion is carried out at the level of rank, when the output of each biometric system was a subset of possible matches sorted by declining self-esteem. The intention of the merger at rank level was to combine the output individual biometric subsystems to achieve greater accuracy. They used facial recognition, ear signature recognition and recognition systems and processed ones that use Eigen and Fisher face projection projection for registration and identification of the face, projection of own ears for registration and identification of ears, and Self-Signature projection for registration and signature identification. So use the assignment function based on in the ranks of the face, ear and signature there was a merger at the level of rank, and the final exit from them was obtained. From their by experiment, they came to the conclusion that the fishing face works more efficiently than the technique of its own face and of the three biometric face recognition systems, it worked or worked better than its own ear and your own signature.[5]

In this article, they considered the extraction and evaluation of fingerprints, as well as the extraction of the veins of the fingers and conversion to the knowledge of a person. They also combined two biometric recognition systems using Enhanced partial discrete Fourier transformation (EP-DFT), since the DfT Matrix has its own characteristics, such as orthogonality. Like The DfT Matrix shortens the time for its multiplication by The Matrix, so that it becomes a partial discrete Fourier transformation compact and computationally efficient. They considered three different merger options where they have considered a set of fingerprint functions based on markants and a set of fingerprint functions based on an image using an element level Fusion Strategy. Their analysis concluded that EP-DFT significantly increases system security compared to EP-DFT original P-DFT. They also concluded that it is necessary to design a good, effective irreversible transformation functions for cancellable multi-biometric systems.

The basis of the eigenfaces method is the Principal Component Analysis (PCA). Eigenfaces and PCA have been used by Sirovich and Kirby to represent the face images efficiently.

They have started with a group of original face images, and calculated the best vector system for image compression. Then Turk and Pentland applied the Eigenfaces to face recognition problem. The Principal Component Analysis is a method of projection to a subspace and is broadly used in pattern recognition. An objective of PCA is the replacement of correlated vectors of large dimensions with the uncorrelated vectors of smaller dimensions. Another objective is to calculate a basis for the data set. Main advantages of the PCA are its low sensitivity to noise, the reduction of the requirements of the memory and the capacity, and the increase in the efficiency due to the operation in a space of smaller dimensions.

This method is highly effective for search objects in images and video sequences in real time.[7]

This detector has an extremely low probability of false detection of the face. The method works well and detects facial features even when observing an object at a slight angle, up to about 30°. Recognition accuracy using this method can reach values over 90 percentages, which is a very good result. When the angle of inclination is more than 30°, the probability of detecting a face drops sharply. The indicated feature of the method does not allow in a standard implementation to detect a person’s face, turned at an arbitrary angle, which greatly complicates or makes it impossible to use the algorithm in modern production systems, taking into account their growing needs.

The following steps are procedures for identifying an individual.

The below is the flow of working procedure of multi biometric recognition systems.

Nowadays, biometrics have become a new trend in public and private workspace, where data or any other personal security is a major concern. Most nations move away from the traditional way to secure houses of technology road. Instead of the lock and key system, more biometric door locks are used, which is a combined system of two or more biometric identification techniques for verification and verification. The biometric door will have a latch with fingerprint recognition or palm print recognition in order to identify the homeowner. And were introduced videos, which offer an easy way to find out who’s at the door, without get close to the door. Bells with video can be connected to smartphones via Wi-Fi and the user can get alert when someone approaches the door. Video Bell records video when the bell is pressed and it offers two-way audio communication that allows you to communicate with the visitor from anywhere through your phone. Other features include facial recognition technology, which identifies visitors by name, motion sensing technology that knows the difference between humans, cars and animals.  Biometrics is also used in many organizations and educational institutions to record employees participation. The Multi biometric attendance system provides employees with flexibility in recording their presence; and working time at the right time interval. The main advantage of using multimodal biometric systems is fast identification and authentication. If one of the modalities fails to determine and submit a decision, the user can choose different modality or based on the convenience of the user, he can choose a modality to gain access. Biometrics are it is also used in financial sectors such as banks, ATMs, insurance companies for Secured Transactions. Financial sectors are in terms of transactions very sensitive, because spoofing can lose a huge amount of money. To ensure secured transactions, financial sectors adopt biometric identification techniques identify account holders and also for KYC. Scanning the veins and scanning the iris are popular today where the user does it it does not require contact with the sensor and is more reliable and faster than other biometric technologies. Healthcare the Centers also use biometrics to identify the right patient, to provide a medical history and patient treatment plan.