In the stochastic frontier model, the composed error term consists of the measurement error and the inefficiency term. A general assumption is that the inefficiency term follows a truncated normal or exponential distribution. In a wide variety of models evaluating the cumulative distribution function of the composed error term is required. This work introduces and proves four representation theorems for these distributions - two for each distributional assumptions. These representations can be utilized for a fast and accurate evaluation. 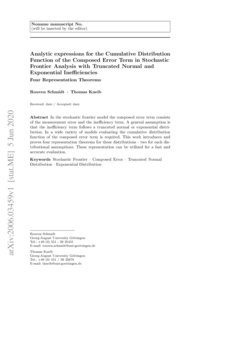 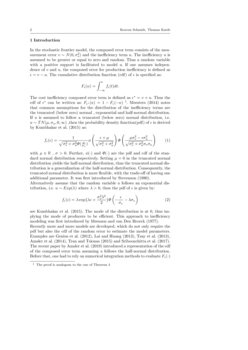 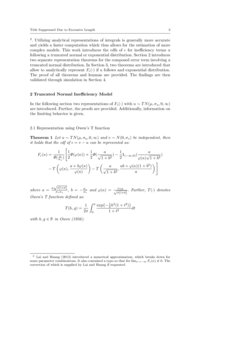 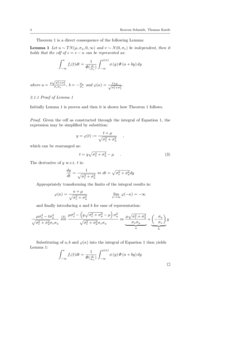 In the stochastic frontier model, the composed error term consists of the measurement error v∼N(0,σ2v) and the inefficiency term u. The inefficiency u

is assumed to be greater or equal to zero and random. Thus a random variable with a positive support is facilitated to model

u. If one assumes independence of v and u, the composed error for production inefficiency is defined as ϵ=v−u. The cumulative distribution function (cdf) of ϵ is specified as:

The cost inefficiency composed error term is defined as ϵ∗=v+u. Thus the cdf of ϵ∗ can be written as: Fϵ∗(κ)=1−Fϵ(−κ) 111The proof is analogous to the one of Theorem 3.2. meesters2014note

notes that common assumptions for the distribution of the inefficiency terms are the truncated (below zero) normal , exponential and half-normal distribution. If

u is assumed to follow a truncated (below zero) normal distribution, i.e. u∼TN(μ,σu,0,∞)

,then the probability density function(pdf) of

ϵ is derived by kumbhakar2015practitioner as:

see kumbhakar2015practitioner. The mode of the distribution is at 0, thus implying the mode of producers to be efficient. This approach to inefficiency modeling was first introduced by meeusen1977efficiency.

Recently more and more models are developed, which do not only require the pdf but also the cdf of the random error to estimate the model parameters. Examples are

genius2012measuring, lai2013maximum, tsay2013simple, amsler2014using, tran2015endogeneity and sriboonchitta2017double. The recent paper by amsler2019evaluating introduced a representation of the cdf of the composed error term assuming u follows the half-normal distribution. Before that, one had to rely on numerical integration methods to evaluate Fϵ(⋅) 222lai2013maximum introduced a numerical approximation, which breaks down for some parameter combinations. It also contained a typo so that for limκ→−∞Fϵ(κ)≠0. The correction of which is supplied by Lai and Huang if requested.. Utilizing analytical representations of integrals is generally more accurate and yields a faster computation which thus allows for the estimation of more complex models. This work introduces the cdfs of ϵ for inefficiency terms u following a truncated normal or exponential distribution. Section 2 introduces two separate representation theorems for the composed error term involving a truncated normal distribution. In Section 3, two theorems are introduced that allow to analytically represent Fϵ(⋅) if u follows and exponential distribution. The proof of all theorems and lemmas are provided. The findings are then validated through simulation in Section 4.

In the following section two representations of Fϵ(⋅) with u∼TN(μ,σu,0,∞) are introduced. Further, the proofs are provided. Additionally, information on the limiting behavior is given.

Theorem 1 is a direct consequence of the following Lemma:

Initially Lemma 1 is proven and then it is shown how Theorem 2.1 follows.

Given the cdf as constructed through the integral of Equation 1, the expression may be simplified by substition:

which can be rearranged as:

Appropriately transforming the limits of the integral results in:

and finally introducing a and b for ease of representation:

Substituting of a,b and φ(κ) into the integral of Equation 1 then yields Lemma 1:

in order to solve the obtained integral. An alternative representation is achieved by utilizing the following identity from owen1956tables:

to rewrite the first term of Equation 4 to:

Equation 4 can therefore be rewritten as:

Thus resulting in a compact representation of the integral of Equation 1, which from here on is referred to as Owen’s T function CDF:

Here it becomes clear that if as μ tends towards 0, a does the same, leading to a singularity. For the case μ=0 the truncated normal distribution becomes the half-normal distribution, for which there is a closed form by amsler2019evaluating. For the sake of completeness it is provided below:

The following equations, which can be found in owen1956tables can be utilized to find the limits of the integral:

The functional value of the cdf as κ tends towards −∞ is:

The functional value of the cdf as κ tends torwards ∞ is:

Let u∼TN(μ,σu) and v∼N(0,σv) be independent, then it holds that the cdf of ϵ=v−u can be represented as:

where BvN(⋅) is the cdf of a bivariate normal distribution with correlation parameter ρ∈[−1,1].

to the result of Lemma 1, thus constructing a representation in terms of the cdf of the bivariate normal distribution. Utilizing the introduced substitions from Lemma 1, the equation simplifies to

which is referred to as BvN CDF. ∎

In the following section, two representations of Fϵ(⋅) with u∼Exp(λ) are introduced. Further, the proofs are provided. Additionally, information on the limiting behavior is given.

Theorem 3.1 is a direct consequence of the following Lemma:

Initially Lemma 2 is proven and then it is shown how Theorem 3.1 follows.

Utilising standard algebra, the Equation 2 can be rearranged as follows:

Given the cdf as constructed through the integral of Equation 2, the expression may be simplified by substition:

which can be rearranged as:

Appropriately transforming the limits of the integral results in:

Substituting a,b,dt and φ(κ) in the integral of Equation 2 then yields Lemma 2:

Thus resulting in a compact representation of the integral in Equation 2:

The limits can be simplified with

The functional value of the cdf as κ tends torwards −∞ is:

The functional value of the cdf as κ tends torwards ∞ is:

is cdf of the Exponentially Modified Gaussian Distribution with parameters

The cdf of the EMG with the mean of Gaussian component being 0 is:

Since the random variable v is symmetric around zero −v and v follow the same distribution, i.e. −v∼N(0,σ2v) and v∼N(0,σ2v). Consequently

This distribution is referred to as EmG CDF. ∎

. The cdfs were evaluated at the empirical quantiles

The accuracy of the implementation is defined as:

For the truncated normal inefficiency model the derived formulas are identical in theory, but the accuracy of the numerical implementation does depend on both the implementation of the Owen’s T function and the bivariate normal cdf 333The statistical software R (3.6.2) was utilized. The truncated normal distributed random numbers were generated using the implementation of an an accept-reject sampler in the package truncnorm (1.0.8). The Owen’s T function of the pracma(2.2.9) and cdf of the bivariate normal distribution of the pbivnorm (0.6.0) package were used.. The figure 1 summarises the differences over all parameter combinations for different values of p for the representations Owen CDF and BvN CDF.

The implementation of the BvN CDF is more accurate in this simulation. Thus, in the further analysis the Owen CDF is neglected.

The results show that the BvN CDF is faster in terms of computation time.

For the exponential inefficiency model, both representations seem identical in terms of accuracy. The simulation results are 666For the cdf of the EmG distribution the package emg (1.0.8) was used:

The implementation of the EmG CDF is slightly faster. Thus the further analysis will focus on this representation.

A more detailed table of the simulation results for the BvN CDF and EmG CDF is presented in Section 6.1.

The contribution of this paper are the analytical integrals of the cdf of the composed error term for the case of the inefficiency term following a truncated normal or exponential distribution. For the truncated normal inefficiency model the cdf can be written as the Owen CDF and BvN CDF, which are analytically the same but the numerical implementation of the latter is more accurate. In the exponential inefficiency model, the cdf is written as the Erf CDF and EmG CDF, which yield similiar results, in terms of accuracy with the second being faster to compute. The analytical representation of the cdfs allow for accurate and fast evaluation.

The authors would like to thank Alexander Ritz for his insights and helpful comments. His mathematical support played an integral part in the derivation of the presented work. The authors received financial support from the German Research Foundation (DFG) within the research project KN 922/9-1