This paper addresses the asymptotic behavior of a particular type of information-plus-noise-type matrices, where the column and row number of the matrices are large and of the same order, while signals are diverged and time delays of the channel are fixed. We prove that the empirical spectral distribution (ESD) of the large dimension sample covariance matrix and a well-studied spiked central Wishart matrix converge to the same distribution. As an application, an asymptotic power function is presented for the general likelihood ratio statistics for testing the presence of signal in large array signal processing. 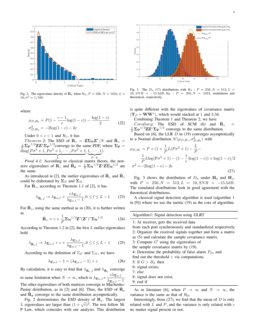 The signal detection of information-plus-noise-type matrices is fundamental to modern wireless communication networks. Due to the growing scale of network and limited time resource, the available sample sizes cannot be quite larger than the dimensions. For this issue, the traditional covariance matrix theory is actually not applicable, which needs much larger sample sizes than signal dimensions[1]

where #E denotes the cardinality of the set E, λj is the j

[6] and [3] investigated the general likelihood ratio test (GLRT) for linear spectral statistics of the eigenvalues of high-dimensional SCM from Gaussian populations. There is a gap between the traditional signal detection model as [11] and state-of-art random matrices theory [3], which, hopefully, can be connected by our research as a bridge.

In this work, a simple kind of information-plus-noise-type matrices with isotropic noise and limited signal dimension is studied. It is proved that the ESD of the received SCM converges in distribution to the ESD of central spike Wishart matrix[2]. Based on this feature, GLRT in [6] has been used in hypothesis test of the signal detection for massive MIMO systems. In this paper, the GLRT tests were applied in time domain to support the hybrid transmission scheme such as filter bank multicarrier (FBMC) or filtered multitone (FMT) modulation [7]. Except the scenario in this paper, the results could be used widely from MIMO detection[8] to multiuser detection[11].

By proposed hypothesis test method, we evaluate the detection performance of large antenna array using the same number of antennas but the different number of samples. it is found that the simulation results highly agree with those from the theoretical analysis.

In this paper, P is the antenna number and N is the sample number which are N and n in [5] and Lemma 1, s(n) is the n-th element of sequence s, s

is the row vector,

[x1;x2;⋯;xn] means constructing a matrix by xl as rows, diag(v) returns a square diagonal matrix with the elements of vector v on the main diagonal, ∗ is the Hermitian transpose operator, X is the received signal matrix, X(i,l) is the i,l-th element of X which is Xi,l in [5] and Lemma 1, N(0,1)

is the Normal distribution,

In signal detection, SCM analysis is used to explore the fundamental limits of communication[11]. Consider that there is a single transmitter which sends the signal s(n) to P receivers (or antenna elements) in an L-length channel as in [8]. For single antenna element of i, the received signal xi is the summation of the L tap delayed transmitted signal vector s with propagation as hi,l, where l=0,...,L−1. Accordingly, N-length points are sampled from each antenna, which is written as

where h is the concatenate factor of transmitter amplifier and channel, hi,l∼CN(0,σ2), s(n)

is the transmit signal and follows the Binomial distribution as

σ2 is the signal power on each taps. Suppose the receiver truncates length-N signal for detection. The length of channel delay is not larger than L samples. The l−lag of the signal vector has elements as sl={s(−l),⋯,s(N−l+1)}.

Furthermore, it is assumed that the noise and channel propagation are uncorrelated. The complex Gaussian noise has the property as

The channel propagation has the same property.

Note F(x) as the ESD of the SCM. Under hypothesis H0, the SCM is not a good approximate of the covariance matrix (4). As stated by Machenko-Pastur theorem, almost surely

Under hypothesis H1, the similar ESD analysis of the SCM has been proposed, such as in [8]. However, they did not provide the ESD when L>1, and the method is quite explicit[3]. Here, we provide a theoretical result that the ESD of H1 is the same as that of a central Wishart matrix, which has been studied extensively.

For the convenience of portraying the matrix entires, it is assumed that s(i) follows Binary distribution as P(s(i)=k)=1/2,k∈{−1,1}

H as N→∞. b) AN is Hermitian N×N for which the ESD F(AN) converges vaguely to A almost surely, A being a nonrandom distribution function. c) XN, TN, and AN are independent. Let BN=AN+XNTNX∗N. Then, almost surely, F(BN), the ESD of BN, converges vaguely, as N→∞, to a (non-random) distribution function ^F, whose Stieltjes transform m(z)(z∈C+) satisfies

According to lemma 1, the ESD of Bn is determined by the ESD of AN and TN. Then an ideal matrix could be constructed, which has the similar ESD as (10) :

In lemma 2, an artificial ^Rx is constructed whose ESD converges to the same distribution as Rx. Though ^Rx is an artificial matrix which is impossible to obtain, it could be substituted by central spiked Wishart matrices based on convergence in distribution, which is:

The ESD of SCM (6) and a central Wishart matrix Rz converge to the same PDF, where

Rz is a central Wishart matrix, with the covariance matrix ΣN. This spike Wishart matrix has been widely studied[6], which could be used to design hypothesis detector in wireless communication.

According to Lemma 1, the signal detection in large array is translated to a standard high dimensional signal detection problem. Classical methods include detecting the ratio of biggest and smallest eigenvalue, detecting the trace of covariance matrix[9], and LRT[8]. Among them, LRT has a decent history and has been widely used.

According to chapter 10 of [10], we assume that Rn is the SCM formatted by (6), to test the hypothesis H0:Σ=I, where Σ is the covariance matrix of a vector X distributed according to N(μ,Σ). It is showed that the LRT

is unbiased LRT of (4). The detector is researched widely such as [6].

To make statistical integration about a parameter θ=∫f(x)dFM(x). It is natural to use the estimator

The log-liklihood ratio (LLR) could be further rewritten as

where λi is the i-th eigenvalue of tested covariance matrix.

The ESD of Rz has been rarely studied. The work [6] investigated the fluctuation of linear spectral statistics of form (17), with the form Rn=Z∗ΣPZ/N or R––n=Σ1/2PZZ∗Σ1/2P/N and its results are based on P/N<1, which is different from Rz.

Substituting Z by Z∗, Rz could fit the structure of Rn in [6], and the results from [6] could be used directly. But in practice, the number of samples is larger than the antenna number in most scenario, which means 0<c<1 is more practical.

Under 0<c<1 and H0, Rz equals Rw,w and Dn converges to normal distribution as shown in [6], which is

According to classical matrix theory, the non-zero eigenvalues of Rz and are the same.

, the outlier eigenvalues of

^Rz and ~Rz could be elaborated by ΣP and ΣN.

For ^Rz, using the same method as in (20), it is further written as

According to Theorem 1.2 in [2], the first L outlier eigenvalues hold

According to the definition of ΣP and ΣN, we have

By calculation, it is easy to find that λ~Rz,l and λ^Rz converge to same limitation when N→∞, which is λΣP,l+cλΣP,lλΣP,l−1. The other eigenvalues of both matrices converge to Machenko-Pastur distribution, as in [2] and [6]. Thus, the ESD of ^Rx and ~Rz converge to the same distribution asymptotically.

Fig. 2 demonstrates the ESD density of Rx. The largest L eigenvalues are larger than (1+√c)2. The rest follow M-P Law, which coincides with our analysis. This distribution is quite different with the eigenvalues of covariance matrix (TP+WW∗), which would stacked at 1 and 3.56.

Combining Theorem 1 and Theorem 2, we have

Corollary: The ESD of SCM (6) and ~Rz=1NΣP1/2ZZ∗ΣP1/2 converge to the same distribution.

Fig. 3 shows the distribution of Dn under H0 and H1, with P=256,N=512,L=10,SNR=−15.5dB. The simulated distributions look in good agreement with the theoretical distributions.

A classical signal detection algorithm is used (algorithm 1 in [9]) where we use the metric (19) as the core of algorithm.

The choice of threshold γ is a compromise between Pd and Pfa. The probability of false alarm is

where the Q function is one minus the cumulative distribution function of the standardized normal random variable.

Under H1, using γ as threshold, the distance between Dn and γ follows Normal distribution as

the theoretical miss probability is

. Fig. 6 is the ROC (receiver operating characteristic) curve with

The gaps in Fig. 4, 5 and 6 are brought by the infinite approximation of P, as well as the approximation character of variance estimation which is referred from [6]. Reviewing Fig. 3, the variance under H1 looks larger than under H0, which makes the empirical density of H0 higher than H1 but the theoretical variance is still the same. So even the variance analysis of (24) in [6] is the most accurate work till now, there still has room to improve.

In this paper, we have proposed a detection algorithm in the large antenna array system when the antenna number and the samples number are comparable. Two theorems have been presented to connect the detection with the newest statistical results. Furthermore, we have given a new detection metric which is based on an asymptotic result in RMT. Simulation results have shown that the model agrees with real simulations very well. In further works, we would simplify the complexity using distributed algorithm. This paper has given results in asymptotic scenario. It is interesting to investigate the bound when P and N are not so large. Furthermore, this results could be extended to other applications easily, such as a multiuser with Rician channel scenario.