Analysis of the Symmetric Join the Shortest Orbit Queue

This work introduces the join the shortest queue policy in the retrial setting. We consider a Markovian single server retrial system with two infinite capacity orbits. An arriving job finding the server busy, it is forwarded to the least loaded orbit. Otherwise, it is forwarded to an orbit randomly. Orbiting jobs of either type retry to access the server independently. We investigate the stability condition, the stationary tail decay rate, and obtain the equilibrium distribution by using the compensation method. 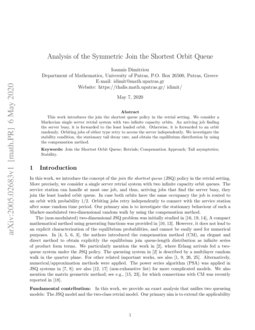 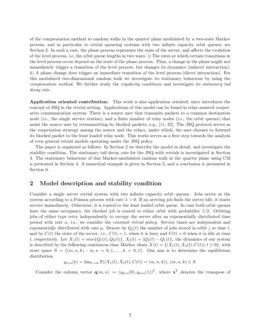 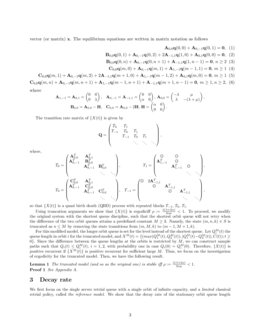 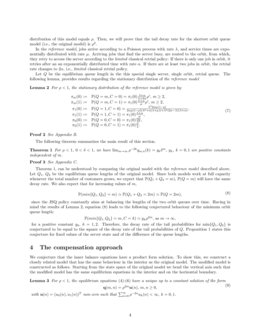 An Infinite Dimensional Model for a Many Server Priority Queue

We consider a Markovian many server queueing system in which customers a...
Neal Master, et al. ∙

In this paper, we study a large system of N servers each with capacity t...
Thirupathaiah Vasantam, et al. ∙

In this work, we introduce the concept of the join the shortest queue

(JSQ) policy in the retrial setting. More precisely, we consider a single server retrial system with two infinite capacity orbit queues. The service station can handle at most one job, and thus, arriving jobs that find the server busy, they join the least loaded orbit queue. In case both orbits have the same occupancy the job is routed to an orbit with probability

1/2. Orbiting jobs retry independently to connect with the service station after some random time period. Our primary aim is to investigate the stationary behaviour of such a Markov-modulated two-dimensional random walk by using the compensation method.

The (non-modulated) two-dimensional JSQ problem was initially studied in [16, 19, 14], A compact mathematical method using generating functions was provided in [10, 13]. However, it does not lead to an explicit characterization of the equilibrium probabilities, and cannot be easily used for numerical purposes. In [4, 5, 6, 3], the authors introduced the compensation method (CM), an elegant and direct method to obtain explicitly the equilibrium join queue-length distribution as infinite series of product form terms. We particularly mention the work in [2], where Erlang arrivals fed a two-queue system under the JSQ policy. The queueing system in [2] is described by a multilayer random walk in the quarter plane. For other related important works, see also [1, 9, 26, 25]. Alternatively, numerical/approximation methods were applied. The power series algorithm (PSA) was applied in JSQ systems in [7, 8]; see also [12, 17] (non-exhaustive list) for more complicated models. We also mention the matrix geometric method; see e.g., [15, 23], for which connections with CM was recently reported in [18].

In this work, we provide an exact analysis that unifies two queueing models: The JSQ model and the two-class retrial model. Our primary aim is to extend the applicability of the compensation method to random walks in the quarter plane modulated by a two-state Markov process, and in particular to retrial queueing systems with two infinite capacity orbit queues; see Section 2. In such a case, the phase process represents the state of the server, and affects the evolution of the level process, i.e, the orbit queue lengths in two ways: i) The rates at which certain transitions in the level process occur depend on the state of the phase process. Thus, a change in the phase might not immediately trigger a transition of the level process, but changes its dynamics (indirect interaction). ii) A phase change does trigger an immediate transition of the level process (direct interaction). For this modulated two-dimensional random walk we investigate its stationary behaviour by using the compensation method. We further study the ergodicity conditions and investigate its stationary tail decay rate.

This work is also application oriented, since introduces the concept of JSQ in the retrial setting. Applications of this model can be found in relay-assisted cooperative communication system: There is a source user that transmits packets to a common destination node (i.e., the single service station), and a finite number of relay nodes (i.e., the orbit queues) that assist the source user by retransmitting its blocked packets, e.g., [11, 22]. The JSQ protocol serves as the cooperation strategy among the source and the relays, under which, the user chooses to forward its blocked packet to the least loaded relay node. This works serves as a first step towards the analysis of even general retrial models operating under the JSQ policy.

Consider a single server retrial system with two infinite capacity orbit queues. Jobs arrive at the system according to a Poisson process with rate λ>0

. If an arriving job finds the server idle, it starts service immediately. Otherwise, it is routed to the least loaded orbit queue. In case both orbit queues have the same occupancy, the blocked job is routed to either orbit with probability 1/2. Orbiting jobs of either type retry independently to occupy the server after an exponentially distributed time period with rate

, the dynamics of our system is described by the following continuous time Markov chain

q(m,n):=(qm,n(0),qm,n(1))T, where xT denotes the transpose of vector (or matrix) x. The equilibrium equations are written in matrix notation as follows

The transition rate matrix of {X(t)} is given by

Using truncation arguments we show that {X(t)} is ergodiciff ρ:=λ(λ+2α)2αμ<1. To proceed, we modify the original system with the shortest queue discipline, such that the shortest orbit queue will not retry when the difference of the two orbit queues attains a predefined constant M≥3. Namely, the state (m,n,k)∈S is truncated as n≤M by removing the state transitions from (m,M,k) to (m−1,M+1,k).

For this modified model, the longer orbit queue is set for the level instead of the shortest queue. Let QMi(t) the queue length in orbit i for the truncated model, and XM(t)={(max(QM1(t),QM2(t)),|QM1(t)−QM2(t)|,C(t));t≥0}. Since the difference between the queue lengths at the orbits is restricted by M, we can construct sample paths such that Qi(t)≤QMi(t), i=1,2, with probability one in case Qi(0)=QMi(0). Therefore, {X(t)} is positive recurrent if {XM(t)} is positive recurrent for sufficient large M. Thus, we focus on the investigation of ergodicity for the truncated model. Then, we have the following result.

We first focus on the single server retrial queue with a single orbit of infinite capacity, and a limited classical retrial policy, called the reference model. We show that the decay rate of the stationary orbit queue length distribution of this model equals ρ. Then, we will prove that the tail decay rate for the shortest orbit queue model (i.e., the original model) is ρ2.

In the reference model, jobs arrive according to a Poisson process with rate λ, and service times are exponentially distributed with rate μ. Arriving jobs that find the server busy, are routed to the orbit, from which, they retry to access the server according to the limited classical retrial policy: If there is only one job in orbit, it retries after an an exponentially distributed time with rate α. If there are at least two jobs in orbit, the retrial rate changes to 2α, i.e., limited classical retrial policy.

Let Q be the equilibrium queue length in the this special single server, single orbit, retrial queue. The following lemma, provides results regarding the stationary distribution of the reference model

For ρ<1, the stationary distribution of the reference model is given by:

The following theorem summarizes the main result of this section.

Theorem 1, can be understood by comparing the original model with the reference model described above. Let Q1, Q2 be the equilibrium queue lengths of the original model. Since both models work at full capacity whenever the total number of customers grows, we expect that P(Q1+Q2=m), P(Q=m) will have the same decay rate. We also expect that for increasing values of m,

since the JSQ policy constantly aims at balancing the lengths of the two orbit queues over time. Having in mind the results of Lemma 2, equation (8) leads to the following conjectured behaviour of the minimum orbit queue length:

We conjecture that the inner balance equations have a product form solution. To show this, we construct a closely related model that has the same behaviour in the interior as the original model. The modified model is constructed as follows. Starting from the state space of the original model we bend the vertical axis such that the modified model has the same equilibrium equations in the interior and on the horizontal boundary.

For ρ<1, the equilibrium equations (4)-(6) have a unique up to a constant solution of the form

We consider a modified model, which is closely related to the original one described by ~X(t) and that is expected to have the same asymptotic behavior. This modified model is considered on a slightly different grid, namely {(m,n,k):m≥0,n≥0,k=0,1}∪{(m,n,k):m<0,m+n≥0,k=0,1}.

which implies that indeed γ=ρ2.

In the following, we describe the form of the solution satisfying the inner equilibrium equations, and specify the form of u(n).

The desired result is obtained directly by substituting the product form in (6). For det(D(γ,δ))=0, the matrix D(γ,δ) has rank equal to 1. From the system of linear equations D(γ,δ)θ=0, and the form of D(γ,δ) we derive the second in (13).

Note that the value of eigenvector

θ is independent of the values of γ, δ that satisfy (13).

Starting from det(D(γ,δ))=0, simple algebraic computations yield in (14). Surprisingly, the form (14) is exactly the same as the one of equation (8) in Lemma 1 of the seminal paper [4], and thus, the assertions i), ii) can be proven similarly, so further details are omitted.

Lemmas 4, 5 characterize the basic solutions satisfying the inner equation (6). It is easily seen that the pair (γ0,δ0)=(ρ2,ρ2/(2+ρ)) satisfy the equilibrium equations (5), (6). In the following, we construct a linear combination of elements from the basis of these solutions, which is a formal solution to the balance equations. The proof of Lemma 6 follows by the substitution of (15) in (4)-(6).

It is easily seen that the solution in (15) does not satisfy the vertical boundary equation (3). To compensate for this error we add a new term such that the sum of two terms satisfies (3), (6). Thus, we assume that h0γm0δn0θ+c1γmδnθ satisfies both (3), (6). Substituting this form in (3) yields

Adding the new term, we violate the horizontal boundary equations (4), (5). Thus, we compensate for this error by adding a product form generated by the pair (γ1,δ1), such that |δ1|<|γ1|. The new solution is now given by

Substituting back to (5) yields for m≥1,

We continue in this manner until we construct the entire formal series,

We now have to show that the solutions (24) converge in two steps: i) to show that the sequences {γi}i∈N, {δi}i∈N converge to zero exponentially fast, and ii) the formal solution converges absolutely. The following theorem summarizes the main result:

In the following, we focus on the asymptotic behaviour of δi/γi and γi+1/δi. This result is important to investigate the convergence of the series in (25).

The final ingredient to check the convergence of the series (25) is to determine the values of the ratios ci+1/hi, hi/ci as i→∞.

1. Using the indexing of the compensation parameters (18),