We consider the interaction between a free flowing fluid and a porous medium flow, where the free flowing fluid is described using the time dependent Stokes equations, and the porous medium flow is described using Darcy's law in the primal formulation. To solve this problem numerically, we use the diffuse interface approach, where the weak form of the coupled problem is written on an extended domain which contains both Stokes and Darcy regions. This is achieved using a phase-field function which equals one in the Stokes region and zero in the Darcy region, and smoothly transitions between these two values on a diffuse region of width ϵ around the Stokes-Darcy interface. We prove the convergence of the diffuse interface formulation to the standard, sharp interface formulation, and derive the rates of the convergence. This is performed by analyzing the modeling error of the diffuse interface approach at the continuous level, and by deriving the a priori error estimates for the diffuse interface method at the discrete level. The convergence rates are also derived computationally in a numerical example. 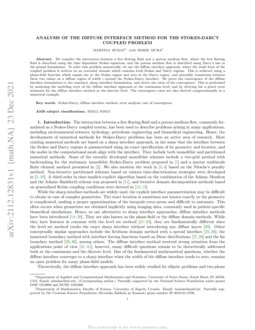 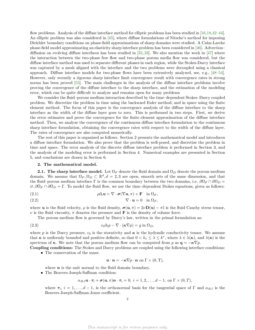 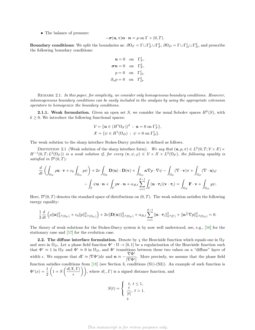 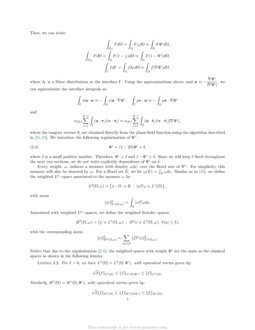 Analysis of the Stokes-Darcy problem with generalised interface conditions

In this paper, we propose and analyze a diffuse interface model for indu...
Xiaodi Zhang, et al. ∙

For capillary driven flow the interface curvature is essential in the mo...
Ronald A. Remmerswaal, et al. ∙

The interaction between a free flowing fluid and a porous medium flow, commonly formulated as a Stokes-Darcy coupled system, has been used to describe problems arising in many applications, including environmental sciences, hydrology, petroleum engineering and biomedical engineering. Hence, the development of numerical methods for Stokes-Darcy problems has been an active area of research. Most existing numerical methods are based on a sharp interface approach, in the sense that the interface between the Stokes and Darcy regions is parametrized using an exact specification of its geometry and location, and the nodes in the computational mesh align with the interface. They include both monolithic and partitioned numerical methods. Some of the recently developed monolithic schemes include a two-grid method with backtracking for the stationary monolithic Stokes-Darcy problem proposed in [1] and a mortar multiscale finite element method presented in [2]. We also mention the work in [3, 4] based on the Nitsche’s penalty method. Non-iterative partitioned schemes based on various time-discretization strategies were developed in [5, 6, 7, 8, 9, 10]. A third-order in time implicit-explicit algorithm based on the combination of the Adams–Moulton and the Adams–Bashforth scheme was proposed in [11], and iterative domain decomposition methods based on generalized Robin coupling conditions were derived in [12, 13].

While the sharp interface methods are widely used, the explicit interface parametrization may be difficult to obtain in case of complex geometries. The exact location is sometimes not known exactly or the geometry is complicated, making a proper approximation of the integrals error-prone and difficult to automate. This often occurs when geometries are obtained implicitly using imaging data, commonly used in patient-specific biomedical simulations. Hence, as one alternative to sharp interface approaches, diffuse interface methods have been introduced [14, 15, 16, 17, 18, 19, 20]. They are also known as the phase-field or the diffuse domain methods. While they have features in common with the level set method [21, 22, 23, 24], they are fundamentally different since the level set method tracks the exact sharp interface without introducing any diffuse layers [20]. Other conceptually similar approaches include the fictitious domain method with a spread interface [25, 26], the immersed boundary method with interface forcing functions based on Dirac distributions [27, 28] and the fat boundary method [29, 30], among others. The diffuse interface method received strong attention from the applications point of view [31, 32, 33, 34, 35, 36, 37, 38, 39, 40, 41], however, many difficult questions remain to be theoretically addressed both at the continuous and the discrete level. One of the fundamental mathematical questions, whether the diffuse interface converges to a sharp interface when the width of the diffuse interface tends to zero, remains an open problem for many phase-field models.

Let ΩF denote the fluid domain and ΩD denote the porous medium domain. We assume that ΩF,ΩD⊂Rd,d=2,3 are open, smooth sets of the same dimension, and that the fluid–porous medium interface Γ is the common boundary between the two domains, i.e. ∂ΩF∩∂ΩD=∅,∂¯ΩF∩∂¯ΩD=Γ. To model the fluid flow, we use the time–dependent Stokes equations, given as follows:

is the fluid Cauchy stress tensor,

ν is the fluid viscosity, π denotes the pressure and F is the density of volume force.

The porous medium flow is governed by Darcy’s law, written in the primal formulation as:

where p is the Darcy pressure, c0 is the storativity and κ is the hydraulic conductivity tensor. We assume that κ is uniformly bounded and positive definite, so that 0<k∗≤λ≤k∗, where λ∈λ(κ), and λ(κ) is the spectrum of κ. We note that the porous medium flow can be computed from p as q=−κ∇p.

Given an open set S, we consider the usual Sobolev spaces Hk(S), with k≥0. We introduce the following functional spaces:

The weak solution to the sharp interface Stokes-Darcy problem is defined as follows.

The theory of weak solutions for the Stokes-Darcy system is by now well understood, see, e.g., [56] for the stationary case and [57] for the evolution case.

Denote by χ the Heaviside function which equals one in ΩF and zero in ΩD. Let a phase field function Φϵ:Ω→[0,1] be a regularization of the Heaviside function such that Φϵ≈1 in ΩF and Φϵ≈0 in ΩD, and Φϵ transitions between these two values on a “diffuse” layer of width ϵ. We suppose that dΓ≈|∇Φϵ|dx and n≈−∇Φϵ|∇Φϵ|. More precisely, we assume that the phase field function satisfies conditions from [18] (see Section 3, conditions (S1)-(S3)). An example of such function is Φϵ(x)=12(1+S(d(X,Γ)ϵ)), where d(.,Γ) is a signed distance function, and

Then, we can write:

where the tangent vectors

~τi are obtained directly from the phase-field function using the algorithm described in [58, 31]. We introduce the following regularization of Φϵ:

where δ is a small positive number. Therefore, Φϵ≥δ and 1−Φϵ≥δ. Since we will keep δ fixed throughout the next two sections, we do not write explicitly dependence of Φϵ on δ.

Every weight, ω, induces a measure with density ωdx, over the Borel sets of Rn. For simplicity, this measure will also be denoted by ω. For a Borel set E, we let ω(E)=∫Eωdx. Similar as in [18], we define the weighted Lp−space associated to the measure ω by:

Associated with weighted Lp−spaces, we define the weighted Sobolev spaces:

with the corresponding norm

Notice that due to the regularization (4), the weighted spaces with weight Φϵ are the same as the classical spaces as shown in the following lemma:

Similarly, H1(Ω)=H1(Ω,Φϵ), with equivalent norms given by:

Notice that, due to the regularization (4), the phase field function is bounded as δ≤Φϵ≤1. Therefore, we have:

Because in the phase field formulation all unknowns are defined on the whole domain, Ω, we define the following Hilbert spaces for k∈N:

where CP depends on the diameter of Ω, but is independent of v. □

Since in this section and Section 3 parameter ϵ is fixed, we will omit writing superscript ϵ in the unknowns for simplicity of notation. We start by proving the well-posedness for the phase field formulation.

There exists a unique weak solution in sense of Definition 2 to the Stokes-Darcy phase field formulation problem. □

Because of the regularization (4) the proof is similar to the well-posedness proof for the Stokes-Darcy system (e.g. [57, 60]). Therefore, here we just outline the main steps of the proof. We define a function space

Notice that the solution u is an element of Vϵdiv. Now, we define a bilinear form a on Vϵdiv×Xϵ as:

and a linear functional F as:

First we prove the following lemma.

The bilinear form a(⋅,⋅) is continuous and coercive on Vϵdiv×Xϵ. □

In order to show the continuity, special attention has to be given to the terms arising from the coupling at the interface. In particular, using the Cauchy-Schwarz inequality followed by Lemma 2, we obtain:

Other terms can be bounded in the standard way. Therefore, we obtain the following estimate:

Using the standard Korn and Poincare inequalities on L2(Ω) together with Lemma 1, we have

which completes the proof of Lemma 4. ■

From estimates analogous to the ones used in Lemma 4, it follows that F∈(Vϵdiv×Xϵ)′. Therefore, by using standard methods (e.g. Galerkin method), one can easily prove that there exists a unique solution (u,p)∈Vϵdiv×Xϵ to the following evolution problem in D′(0,T):

To finish the proof it remains to construct the pressure π corresponding to the solution (u,p) of (6). This follows in analogous way as in the standard theory of the Navier-Stokes equation. We observe that Φ∇⋅:Vϵ→L2(Ω) is a surjective operator. Namely, because of the regularization (4), the equation Φ∇⋅u=g is equivalent to ∇⋅u=gΦ. Therefore, the surjectivity follows directly from the standard Bogovskiǐ theorem (e.g. [61, Section 3.3]). Now, the existence of pressure π can be proved in the same way as in the case of the Navier-Stokes equations (see, e.g., [62, Proposition III.1.1.]). ■

To discretize the problem (5) in space, we use the finite element method. Let Th be a conforming triangulation of Ω and let Vϵh⊂Vϵ, XϵF,h⊂L2(Ω), XϵD,h⊂Xϵ. We assume that the mesh is regular, that the h is a measure of the grid size, and that the fluid and pressure spaces Vϵh and XϵF,h satisfy the discrete inf-sup condition necessary to ensure the stability of the finite element discretization [63]. We also assume that Vϵh and XϵD,h include piecewise polynomials of degree at least k and that XϵF,h includes piecewise polynomials of degree s≤k−1.

Let tn=nΔt for n=0,…,N, where Δt denotes the time step, and T=NΔt is the final time. For time discretization, we use the backward Euler method. Let ψn denote the approximation of a time-dependent function ψ at time level tn. We will use the following notation for the discrete time derivative:

We assume that for the chosen finite element spaces Vϵh and XϵF,h, there exists a projection operator Ph:Vϵ→Vϵh satisfying:

where 0≤s<k and C is a positive constant independent of h and u. Details about the existence of the projection operator in case when Φ=1 can be found in [63] for k=1 and in [64] for k=1,2,3. Using those results, the relations (8)-(9) follow from Lemma 1. In this section, we assume that δ is a fixed, positive number.

Let Sh be a projection operator onto XϵD,h such that

and let Rh be a projection operator onto XϵF,h such that

Let a≲(≳)b denote that there exists a positive constant C, independent h, δ and Δt, such that a≤(≥)Cb. We introduce the following time discrete norms:

where X∈{Hk(Ω,Φ),Hk(Ω,1−Φ)}. Note that they are equivalent to the continuous norms since we use piecewise constant approximations in time. Furthermore, the following inequality holds:

The main result of this section is stated in the following theorem.

Then, the following estimate holds:

We decompose the error into the sum of the interpolation error and the approximation error as: