Analysis of overfitting in the regularized Cox model

The Cox proportional hazards model is ubiquitous in the analysis of time-to-event data. However, when the data dimension p is comparable to the sample size N, maximum likelihood estimates for its regression parameters are known to be biased or break down entirely due to overfitting. This prompted the introduction of the so-called regularized Cox model. In this paper we use the replica method from statistical physics to investigate the relationship between the true and inferred regression parameters in regularized multivariate Cox regression with L2 regularization, in the regime where both p and N are large but with p/N O(1). We thereby generalize a recent study from maximum likelihood to maximum a posteriori inference. We also establish a relationship between the optimal regularization parameter and p/N, allowing for straightforward overfitting corrections in time-to-event analysis. 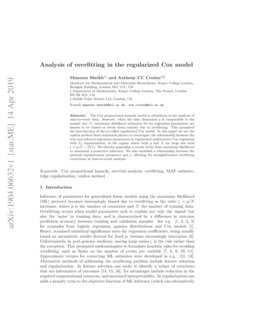 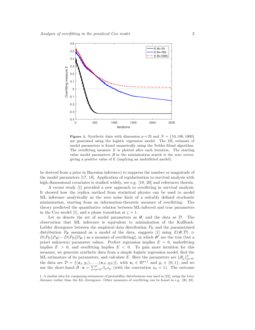 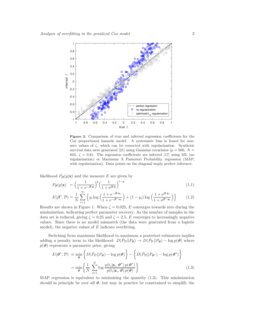 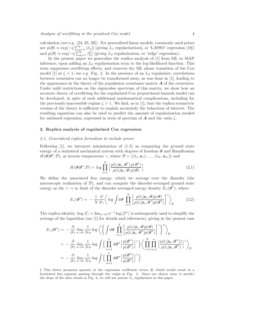 Understanding the role of regularization is a central question in Statis...
Arnaud Fanthomme, et al. ∙

Inference of parameters for generalized linear models using the maximum likelihood (ML) protocol becomes increasingly biased due to overfitting as the ratio ζ=p/N increases, where p is the number of covariates and N the number of training data. Overfitting occurs when model parameters seek to explain not only the ‘signal’ but also the ‘noise’ in training data, and is characterized by a difference in outcome prediction accuracy between training and validation samples. See e.g. [1, 3, 4, 5]

for examples from logistic regression, gamma distributions and Cox models

is the rule rather than the exception. This prompted epidemiologists to formulate heuristic rules for avoiding overfitting, such as limits on the number of events per variable

. Its advantages include reduction in the required computational resources, and increased interpretability. In regularization one adds a penalty term to the objective function of ML inference (which can alternatively be derived from a prior in Bayesian inference) to suppress the number or magnitude of the model parameters

A recent study [1] provided a new approach to overfitting in survival analysis. It showed how the replica method from statistical physics can be used to model ML inference analytically as the zero noise limit of a suitably defined stochastic minimization, starting from an information-theoretic measure of overfitting. The theory predicted the quantitative relation between ML-inferred and true parameters in the Cox model [1]

, and a phase transition at

Let us denote the set of model parameters as ϑ, and the data as D

. The observation that ML inference is equivalent to minimization of the Kullback-Leibler divergence between the empirical data distribution

^PD and the parametrized distribution Pϑ assumed as a model of the data, suggests [1] using E(ϑ,D)≡D(^PD∥Pϑ)−D(^PD∥Pϑ⋆) as a measure of overfitting111

[22], using the Lévy distance rather than the KL divergence. Other measures of overfitting can be found in e.g. [20, 23]., in which ϑ⋆ are the true (but a priori unknown) parameter values. Perfect regression implies E=0, underfitting implies E>0, and overfitting implies E<0. To gain more intuition for this measure, we generate synthetic data from a simple logistic regression model, find the ML estimators of its parameters, and calculate E. Here the parameters are {βμ}pμ=0, the data are D={(x1,y1),…,(xN,yN)}, with xi∈Rp+1 and yi∈{0,1}, and we use the short-hand β⋅x=∑pμ=0βμxμ (with the convention x0=1). The outcome likelihood Pβ(y|x) and the measure E are given by

Results are shown in Figure 1. When ζ=0.025, E converges towards zero during the minimization, indicating perfect parameter recovery. As the number of samples in the data set is reduced, giving ζ=0.25 and ζ=2.5, E converges to increasingly negative values. Since there is no model mismatch (the data were generated from a logistic model), the negative values of E indicate overfitting.

Switching from maximum likelihood to maximum a posteriori estimators implies adding a penalty term to the likelihood:

MAP regression is equivalent to minimizing the quantity (1.3). This minimization should in principle be over all ϑ, but may in practice be constrained to simplify the calculation (see e.g. [24, 25, 26]). For generalized linear models, commonly used priors are p(β)∝exp[−η∑pμ=1|βμ|] (giving L1 regularization222This choice promotes sparsity in the regression coefficient vector β, which would result in a horizontal line segment passing through the origin in Fig. 2. Since our theory aims to predict the slope of the data clouds in Fig. 2, we will not pursue L1 regularizers in this paper.

In the present paper we generalize the replica analysis of [1] from ML to MAP inference, upon adding an L2 regularization term to the log-likelihood function. This term suppresses overfitting effects, and removes the ML phase transition of the Cox model [1] at ζ=1; see e.g. Fig. 2. In the presence of an L2 regularizer, correlations between covariates can no longer be transformed away, as was done in [1], leading to the appearance in the theory of the population covariance matrix A

of the covariates. Under mild restrictions on the eigenvalue spectrum of this matrix, we show how an accurate theory of overfitting for the regularized Cox proportional hazards model can be developed, in spite of such additional mathematical complications, including for the previously inaccessible regime

ζ>1. We find, as in [1], that the replica symmetric version of the theory is sufficient to explain accurately the behaviour of interest. The resulting equations can also be used to predict the amount of regularization needed for unbiased regression, expressed in term of spectum of A and the ratio ζ.

2.1 Generalized replica formalism to include priors

Following [1], we interpret minimization of (1.3

The replica identity ⟨logZ⟩=limn→0n−1log⟨Zn⟩ is subsequently used to simplify the average of the logarithm (see [1] for details and references), giving in the present case

) is applicable to any parametric model

p(t|z,ϑ) and any prior p(ϑ). See also [27] for alternative results on the use of the replica method in statistical inference. We will now make a specific choice for p(t|z,ϑ), and use (2.3) to develop a theory for regression and overfitting in regularized Cox models with Gaussian priors.

Its parameters are the coefficients β∈Rp, and a base hazard rate λ(t) (a nonnegative function defined for 0≤t<∞). Substituting ϑ={β,λ} translates (2.3) into

Functional integrals are written as ∫{\rmdλ}, the true parameters responsible for the data are written as {β⋆,λ⋆}, and we follow the standard convention for regularized Cox models of only including a prior for the association parameters (equivalently, assuming an improper, or ‘flat’, prior for the base hazard rate). Our L2 prior is p(β)∝exp(−ηβ2). To proceed with the analytical treatment, we assume that the covariate vectors zi are drawn independently from a population distribution with zero mean and covariance matrix A. The introduction of regularization means that the regression equations for correlated covariates can no longer be transformed to those corresponding to uncorrelated ones. This leads to a more complex theory than [1], and ultimately to conditions on the eigenvalue spectrum of A.

Our analysis is carried out in the regime where both N,p→∞ but with fixed ratio ζ=p/N∼O(1). To retain non-zero event times, even for p→∞, we must rescale the regression coefficients according to β⋅z→β⋅z/√p, resulting in β⋅z∼O(1). Without this rescaling we would have event time distributions with all weight concentrated on t→0 and t→∞. We also replace β⋆ by β0, to allow for more compact notation. Following [1] we next introduce

where y={y0,y1,…,yn}∈Rn+1. The magnitude of \rmeβ⋅z represents the relative risk of failure, compared to that of an ‘average’ individual (with z=0). Therefore y can be considered a vector of risk scores. Our energy density then becomes

To proceed we assume that p(y|β0,…,βn) is Gaussian. This holds for any N and p as soon as p(z)

is Gaussian, and for non-Gaussian covariate statistics it will generally hold due to the Central Limit Theorem if the correlations among the covariates are weak, and

N and p are large. Since we assumed ∫\rmdz p(z)z=0, the risk score distribution is now given by

The entries of A are given by Aμν=∫\rmdz p(z)zμzν. The {Cαρ[{β}]} measure the similarity between the p-dimensional vectors formed by the regression parameters in different replicas. For each replica pair (α,ρ) we use the integral representation of the Dirac delta function, and rescale the conjugate integration parameter by p,

in order to simplify expression (2.7) to

The quadratic nature of the exponent in the β integral, a consequence of having chosen L2 regularization, allows for a closed form solution. Changing the penalty term to L1 or Lq with q>2 would significantly complicate the integrals.

2.3 Conversion into a saddle point problem

With a modest amount of foresight we transform ^C=−12\rmiD, and introduce the short-hand ~β≡A12β. To evaluate the Gaussian β integral in (2.12) we define the np×np matrix Ξ and the np-dimensional vector ξ, with entries

With these definitions we may write the Gaussian integral in (2.12) as

Let {aμ} and {bα} denote the eigenvalues of A and D, respectively. The two terms P and Q of the matrix Ξ, with components Pαμ,βν=2ηγδαβ(A−1)μν and Qαμ,βν=δμνDαβ

, clearly commute. The complete set of eigenvectors of

Ξ can therefore be written as {^uμα}, with components ^uμανρ=uαρvμν, and where ∑ρ≤nDλρuαρ=bαuλρ and ∑ν≤pAλνvμν=aμvμλ, and where both are normalised according to ∑ρ≤n(uαρ)2=∑ν≤p(vμν)2=1. The eigenvalues of Ξ are then ξμα=2ηγ/aμ+bα, and

where the averages in the exponents are over the eigenvalues and orthonormal eigenvectors of Ξ, i.e. ⟨f(a,b,^u)⟩=(np)−1∑pμ=1∑nα=1f(aμ,bα,^uμα). Since p=ζN with ζ>0, the integrals over C, ^C and the base hazard rates in (2.12) can for N→∞ be evaluated by steepest descent, provided the limits n→0 and N→∞ commute. Expression (2.16) then enables us to write the result as

To proceed, we make the replica symmetric ansatz, which implies assuming ergodicity of the stochastic regression process, and translates into invariance of all order parameters under all permutations of the replicas {1,…,n}. Now, for all 1≤α,ρ≤n:

Both C and D are positive definite, so C>c and D>d. We may now write

The entries of C−1 are found to be

Next we turn to terms in (2.18) that involve the spectrum of D. This matrix has one eigenvalue D+(n−1)d with eigenvector v=(1,…,1), and the n−1 fold degenerate eigenvalue D−d

) are now over the joint distribution of eigenvalues and eigenvectors of

and these identities enable us, after some simple rearrangements, to write the limit ΨRS(…)=limn→0n−1ΨRS(…) in the much simpler form