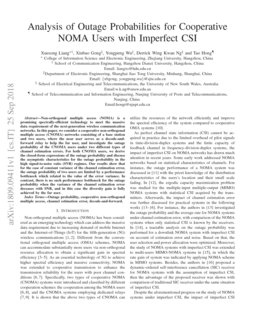 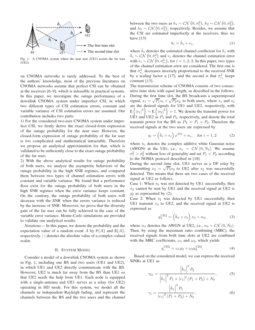 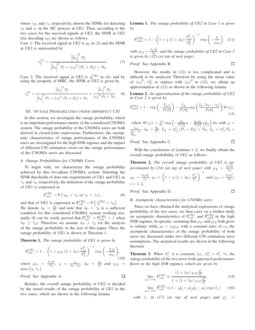 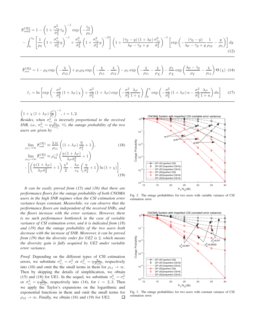 In this paper, a unified framework of non-orthogonal multiple access (NO...
Xinwei Yue, et al. ∙

The Channel Between Randomly Oriented Dipoles: Statistics and Outage in the Near and Far Field

In this paper, the performance of a power domain downlink multiple-input...
Mesut Toka, et al. ∙

Non-orthogonal multiple access (NOMA) has been considered as an emerging technology which can address the massive data requirement due to increasing demand of mobile Internet and the Internet-of-Things (IoT) for the fifth-generation (5G) wireless communications[1, 2]. Different from the conventional orthogonal multiple access (OMA) schemes, NOMA can accommodate substantially more users via non-orthogonal resource allocation to obtain a significant gain in spectral efficiency [3, 4, 5]. As an essential technology of 5G to achieve higher spectral efficiency and massive connectivity, NOMA was extended to cooperative transmission to enhance the transmission reliability for the users with poor channel conditions [6, 7]

. Specifically, two types of cooperative NOMA (CNOMA) systems were introduced and classified by different cooperation schemes: the cooperation among the NOMA users

[6, 8], and the CNOMA systems employing dedicated relays [7, 9]. It is shown that the above two types of CNOMA can utilize the resources of the network efficiently and improve the spectral efficiency of the system compared to cooperative OMA systems[10].

As perfect channel state information (CSI) cannot be acquired in practice due to the limited overhead of pilot signals in time-division-duplex systems and the finite capacity of feedback channel in frequency-division-duplex systems, the impact of imperfect CSI on NOMA networks has drawn much attention in recent years. Some early work addressed NOMA networks based on statistical characteristics of channels. For instance, the outage performance of a NOMA system was discussed in [11] with the priori knowledge of the distribution characteristics of the users’s location and their small scale fading. In [12], the ergodic capacity maximization problem was studied for the multiple-input multiple-output (MIMO) NOMA systems with statistical CSI acquired by the transmitters. Afterwards, the impact of channel estimation error was further discussed for practical systems in the following works [13, 14, 15, 16]. For instance, the authors in [13] investigated the outage probability and the average rate for NOMA systems under channel estimation error, with comparison of the NOMA systems when only statistical CSI is known by the receivers. In [14], a tractable analysis on the outage probability was performed for a downlink NOMA system with imperfect CSI on account of estimation error and noise. Based on that, the user selection and power allocation were optimized. Moreover, the study of NOMA systems with imperfect CSI was extended to multi-users MIMO-NOMA systems in [15], in which the rate gain of system was indicated by applying NOMA scheme in MIMO systems. Besides, the authors in [16] proposed a dynamic-ordered self-interference cancellation (SIC) receiver for NOMA systems with the assumption of imperfect CSI, then the advantage of the proposed receiver was shown with comparison of traditional SIC receiver under the same situation of imperfect CSI.

Despite the aforementioned progress on the study of NOMA systems under imperfect CSI, the impact of imperfect CSI on CNOMA networks is rarely addressed. To the best of the authors’ knowledge, most of the previous literatures on CNOMA networks assume that perfect CSI can be obtained at the receivers [6, 7, 8, 9], which is infeasible in practical systems. In this paper, we investigate the outage performance of a downlink CNOMA system under imperfect CSI, in which two different types of CSI estimation errors, constant and variable variance of CSI estimation errors are assumed. Our contribution includes two parts: 1) For the considered two-user CNOMA system under imperfect CSI, we firstly derive the exact closed-form expression of the outage probability for the near user. However, the closed-form expression of outage probability of the far user is too complicated and mathematical intractable. Therefore we propose an analytical approximation for that, which is validated to be sufficiently close to the exact outage probability of the far user; 2) With the above analytical results for outage probability of both users, we analyze the asymptotic behaviors of the outage probability in the high SNR regimes, and compared them between two types of channel estimation errors with constant and variable variance. We found that a performance floor exist for the outage probability of both users in the high SNR regimes when the error variance keeps constant. On the contrary, the outage probability of both users will decrease with the SNR when the errors variance is reduced by the increase of SNR. Moreover, we prove that the diversity gain of the far user can be fully achieved in the case of the variable error variance. Monte-Carlo simulations are provided to validate our analytical results.

Notations— In this paper, we denote the probability and the expectation value of a random event A by P{A} and E{A}, respectively. |⋅| denotes the absolute value of a complex-valued scalar.

Consider a model of a downlink CNOMA system as shown in Fig. 1, including one BS and two users (UE1 and UE2), in which UE1 and UE2 directly communicate with the BS. However, UE2 is much far away from the BS than UE1 so that UE2 needs the help from UE1. Each node is equipped with a single-antenna and UE1 serves as a relay (for UE2) operating in HD mode. For this system, we model all the channels as independent Rayleigh fading, and represent the channels between the BS and the two users and the channel between the two users as h1∼CN(0,σ21), h2∼CN(0,σ22), and h3∼CN(0,σ23), respectively. Besides, we assume that the CSI are estimated imperfectly at the receivers, thus we have [13]

where ^hi denotes the estimated channel coefficient for hi with ^hi∼CN(0,^σ2i) and ei denotes the channel estimation error with ei∼CN(0,σ2ei), for i=1,2,3. In this paper, two types of the channel estimation error are considered. The first one is that σ2ei decreases inversely proportional to the received SNR by a scaling factor η [17], and the second is that σ2ei keeps constant [13]. The transmission scheme of CNOMA consists of two consecutive time slots with equal length, as described in the follows. During the first time slot, the BS broadcasts a superimposed signal, x1=√P1s1+√P2s2, to both users, where s1 and s2 are the desired signals for UE1 and UE2, respectively, with E{|s1|2}=E{|s2|2}=1. We denote the transmit power for UE1 and UE2 as P1 and P2, respectively, and denote the total transmit power for the BS as PT=P1+P2. Therefore the received signals at the two users are expressed by

where n3 denotes the AWGN at UE2, i.e., n3∼CN(0,N0). Then, by using the maximum ratio combining (MRC), the received signals from both time slots at UE2 are combined with the MRC coefficients, ω1 and ω2, which yields

Based on the considered model, we can express the received SINRs at UE1 as

and that of UE2 is expressed as PUE2out=P{γUE22<¯γ2}. We denote λP=P2P1 and note that λP>¯γ2 is a sufficient condition for this considered CNOMA system working normally (It can be easily proved that PUE1out=PUE2out=1 when λP≤¯γ2). Therefore we assume λP>¯γ2 for the analysis of the outage probability in the rest of this paper. Then, the outage probability of UE1 is shown in Theorem 1.

The outage probability of UE1 is given by

The outage probability of UE2 in Case 1 is given by

However, the results in (1) is too complicated and is difficult to be analyzed. Therefore by using the mean value of |e2|2, ^σ22, to replace with |e2|2 in (1), we obtain an approximation of (1) as shown in the following lemma.

With the conclusions of Lemmas 1–2, we finally obtain the overall outage probability of UE2 as follows.

Since we have obtained the analytical expressions of outage probability of the two users, we then carry on a further study on asymptotic characteristics of PUE1out and ~PUE2out2 in the high SNR regimes. In specific, assuming that ρ11 and ρ12 both grow to infinity while ρ3=c3ρ12 with a constant ratio of c3, the asymptotic characteristics of the outage probability of both users are discussed under two different CSI estimation error assumptions. The analytical results are shown in the following theorem.

When σ2ei is a constant, i.e., σ2ei=σ2c, ∀i, the outage probability of the two users both approach performance floors in the high SNR regimes, which are given by

It can be easily proved from (15) and (16) that there are performance floors for the outage probability of both CNOMA users in the high SNR regimes when the CSI estimation error variance keeps constant. Meanwhile, we can observe that the performance floors are independent of the received SNRs, and the floors increase with the error variance. However, there is no such performance bottleneck in the case of variable variance of CSI estimation error, and it is indicated from (18) and (19) that the outage probability of the two users both decrease with the increase of SNR. Moreover, it can be proved from (19) that the diversity order for UE2 is 2, which means the diversity gain is fully acquired by UE2 under variable error variance.

Depending on the different types of CSI estimation errors, we substitute σ2e1=σ2c or σ2e1=ηN0P1σ21, respectively into (10) and omit the the small terms in them for ρ11→∞. Then by skipping the details of simplification, we obtain (15) and (18) for UE1. In the sequel, we substitute σ2ei=σ2c or σ2ei=ηN0Piσ2i, respectively into (14), for i=2,3. Then we apply the Taylor’s expansions on the logarithmic and exponential functions in them and omit the small terms for ρ12→∞. Finally, we obtain (16) and (19) for UE2. ∎

In this section, the outage probability of the CNOMA system is evaluated based on Monte-Carlo simulations averaging over 106 independent channel realizations, considering different levels of channsl estimation error variances. Furthermore, the asymptotic characteristics of the outage probability of the users are shown in the high SNRs. The system performance with perfect CSI is also included as a benchmark. In specific, the adopted simulation system parameters are set as follows. The data requirements of UE1 and UE2 are set as R1=1.5 bit/Hz/s and R2=1 bit/Hz/s, respectively. The variances of channels fading for BS-UE1, BS-UE2, and UE1-UE2 are set as σ21=0.36, σ22=0.16, and σ23=0.64, respectively. In addition, the power of noises are all set as N0=1, and the parameters of the transmit powers are set by λP=P2/P1=5 and P3=PT−5 dB. In all the figures, the numerical results of outage probability are labeled ’-N’, and the analytical results of outage probability of UE1 (in (10)) and UE2 (in (14)) are labeled ’-A’. We set σ2ei=ηN0(Piσ2i)−1 with η=1,5 and 20 for the case of variable CSI estimation error variance, and set σ2ei=1×10−3,3.3×10−3 and 1×10−2 for the case of constant CSI estimation error variance, for i=1,2,3.

Appendix A Proof of Theorem1

and further recast into

, we can use the probability distribution function (PDF) of

to obtain the expression of (21). Skipping the tedious details for derivation, the final expression of PUE1out is given by (10) , which completes the proof.

Appendix B Proof of Lemma 1

Firstly, we consider Case 1: When s2 was not detected by UE1, the expression of PUE2out1 is given by

and further recast into

Next, we consider Case 2: When s2 was successfully detected by UE1 and then transmitted to UE2, the outage probability of UE2 is given by

, the cumulative distribution function (CDF) of

Firstly, the outage probability of UE2 is approximated by

Firstly, the approximation of the overall outage probability of UE2 is expressed as

where PUE1un represents the probability of unsuccessfully decoding s2 at UE1. Then, PUE1un is recast into

Due to the similarity between (25) and (33), it can be easily obtained that

The paper has been accepted by 2018 Information Technology and Mechatronics Engineering Conference (ITOEC 2018 , 17th Sept. 2018.